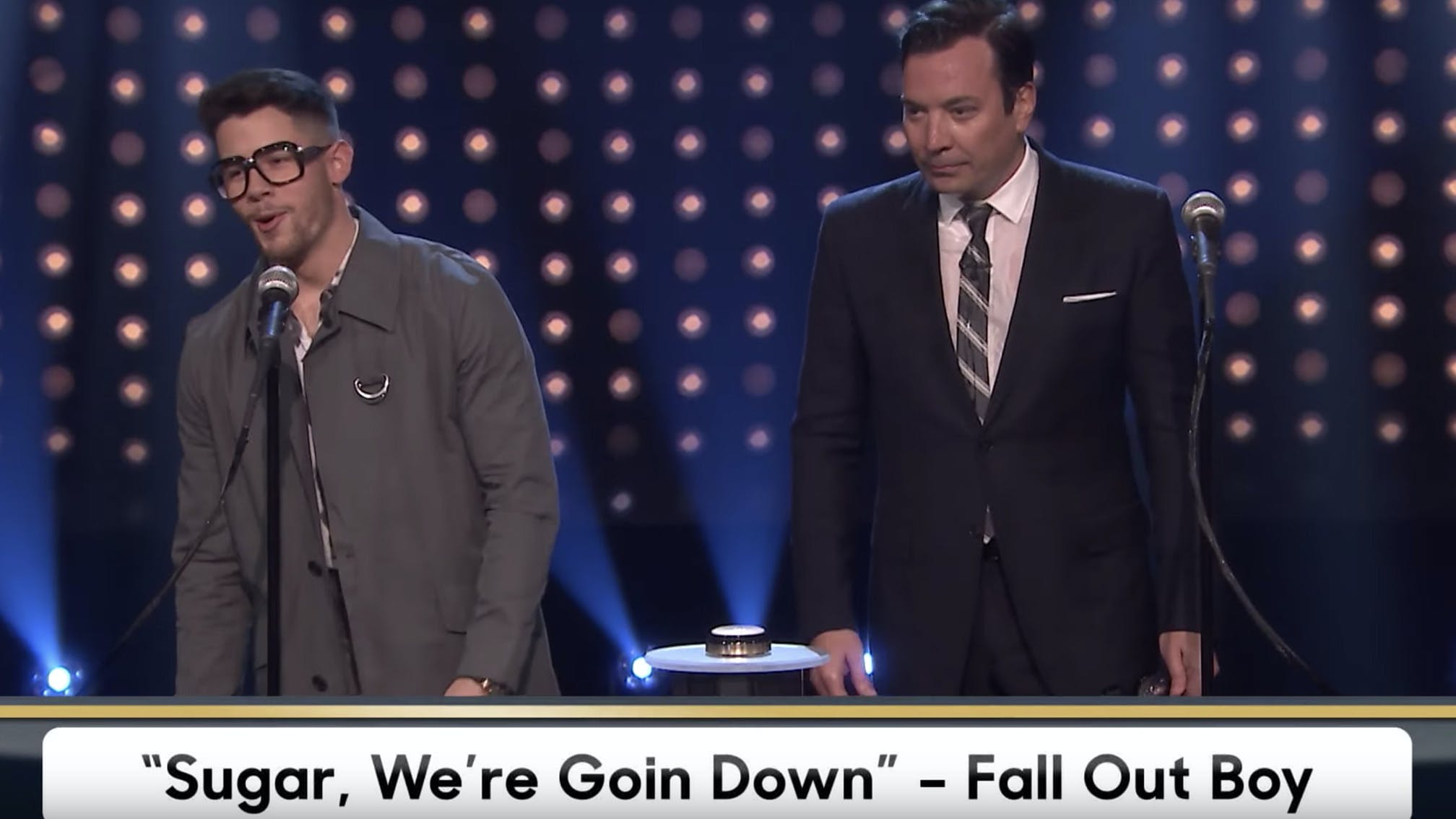 The Jonas Brothers' names have been cropping up in the Kerrang! world a fair bit recently – most notoriously after Joe seemingly leaked the My Chemical Romance reunion news back in June 2019. Now it's Nick's turn to show off his rock knowledge in an appearance on The Tonight Show Starring Jimmy Fallon.

In a game called Slay It, Don't Spray It, Nick and Jimmy are asked to recall certain lyrics; first, they are given cue cards for part of a song's chorus, and then they have to finish singing the rest by memory with absolutely no prompts. If they fail to do so, they're sprayed with water (or if they get it right, their opponent is sprayed).

Read this next: Fall Out Boy albums ranked by Pete Wentz

First up are hits by Katy Perry and Train, before Nick has to belt out Fall Out Boy's smash hit Sugar, We're Goin Down. After Jimmy then performs the Jonas Brothers' own Sucker, the pair have to collectively sing Panic! At The Disco's record-breaking 2018 single High Hopes.

“I don’t know if I got this one, dude," admits Jimmy. "I feel real bad because I think I’m going to ruin it for both of us. I love Panic! At The Disco.”

It's, er, a reasonable effort, guys…

Speaking to Kerrang! recently about what's next for Fall Out Boy, bassist Pete Wentz and vocalist/guitarist Patrick Stump had plenty to say – though there's seemingly no concrete details just yet on the follow-up to 2018's M A N I A.

“We’ve had a lot of talks,” revealed Patrick. “There’s two schools of thought. One is that you have a record cycle, you put out records and then you go on tour and blah, blah, blah. That’s a very ‘business’ thing. And there’s the other school, which is you wait to be inspired, you experiment, and you discover. I feel like at this point we have the luxury of choosing, and I’m personally choosing to be inspired. Look, I flat out don’t want to be in my 70s, on a bus playing stadiums – I don’t want to be The Rolling Stones. But if Pete has lyrics that are that compelling, I will. That’s exactly what the interplay is. At this point, I’m kind of waiting around for those kind of songs. And we have the bubblings of them…”

“Really?” replied Pete. “I don’t I want to say we have the bubblings of anything, because I don’t think there are. If there are bubblings, they are known only to Patrick!”

Read this next: Panic! At The Disco's Brendon Urie: Rock must rip up the rulebook