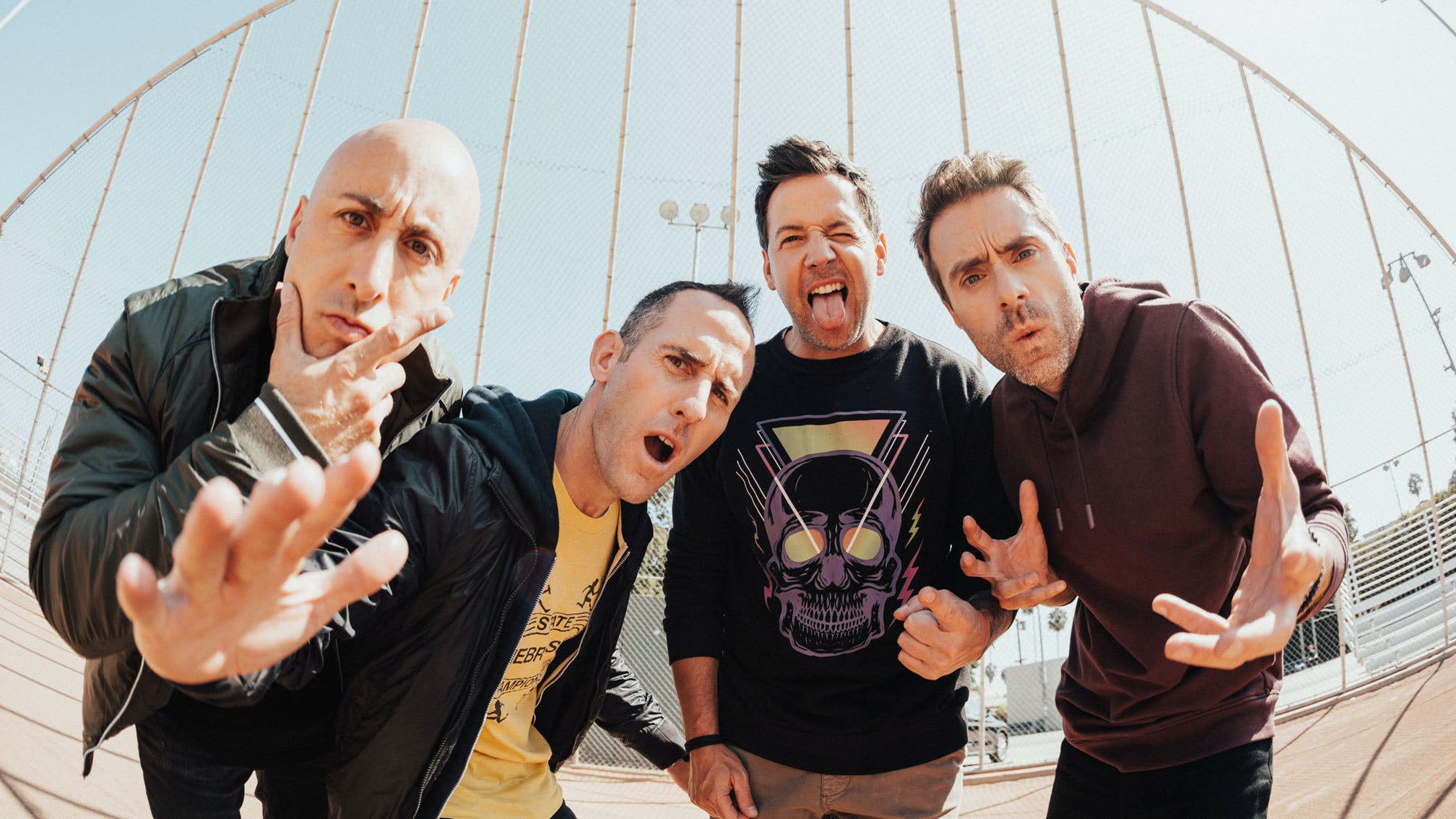 Veterans of the early ’00s pop-punk boom, Simple Plan have managed to stay the course, with 2022 marking their 23rd year as a band. The Montreal natives found themselves firmly back in the zeitgeist thanks to the virality of the I’m Just A Kid challenge on TikTok, which was soundtracked by their hit of the same name, but not content to rest on nostalgia, May 6 will see the release of the band’s sixth LP Harder Than It Looks. A vibrant, fun and emotionally-rich record, it’s an album that’s reinvigorated a band whose output has been pretty limited in recent years. We spoke to frontman Pierre Bouvier to get the scoop on Harder Than It Looks’ creation, as well as Simple Plan’s fundraising efforts for Ukraine and their hopes for further success…

How are you feeling ahead of the release of Harder Than It Looks?
Pierre Bouvier (vocals): “I’m feeling good – I think this new album is really what Simple Plan fans want to hear. There are a couple of songs that are a little different, but I feel like, having been a band for such a long time, we've explored our sound a lot, and now we're feeling really at ease with who we are. And we’re embracing that feeling, rather than trying to mould it into something it’s not. Harder Than It Looks is my favourite-sounding record that we have – this thing is powerful, it's modern and it's got balls. I love it, and I've never felt this confident that fans are going to love this record. The last time I felt this way was in 2004 when we released Still Not Getting Any; at that point, we were at the height of our career, had just sold millions of records, and I was like, ‘People are gonna fucking love this!’ And they did. We’ve regained that feeling with this album, which is really exciting.”

It’s been six years since your last album, Taking One For The Team. Have you had these new songs for a long time?
“We had the album ready to go before the pandemic – everything apart from the final mixing was done pre-February 2020. And then, of course, the world came to a halt. We decided to sit on the record because we were so proud of it that we didn’t want it to get lost in the mayhem and mess that was going on around the world. Plus, the pandemic put a strain on our personal lives and our families, as it did for everyone, so we decided it would be best for us to focus on being at home until the time felt right to start up again. Now, it feels like the time is right to put this thing out and hit the road. Who knows, maybe coronavirus will be with us forever, but this couldn’t wait any longer. Harder Than It Looks had to come out now – we’re too proud of what we’ve done to keep it hidden any longer.”

One of the singles from the album, Wake Me Up (When This Nightmare’s Over), has been used to raise funds for the crisis in Ukraine, and the video was made with a largely Ukrainian crew. Tell us about that…
“Chuck [Comeau, drums] has always had a big hand in the video side of Simple Plan, and he’d spent a while talking with directors about how we could best represent the meaning behind the song in a video. One of the people he was speaking with was Jensen [Noen], who’d directed our two previous videos, and all the while this whole thing with Ukraine and Russia was developing and we were seeing these horrible images of what was happening there. We’ve been to Ukraine before and have many friends from there, including Jensen, and Chuck basically asked him how he would feel about using the video to shed some light on what was happening. It’s obviously already very well-known, but we figured it might help raise a little more awareness, and we could do some fundraising for UNICEF too. Jensen’s response was really positive – it turned out he’d wanted to do that idea all along but hadn’t said anything. His family are still in the country and a lot of his team are Ukrainians, so it was just the perfect fit to get him involved and give him the opportunity to tell that story. I’m not saying we’re going to change the world with it or anything, but if we can just play a small part in helping those who are struggling, then it’s worth doing.”

Simple Plan have been a band for over 20 years now, and you’ve built a sizeable profile and fanbase for yourselves which virtually guarantees any new music you release will find an audience and allow you to tour. With that in mind, what represents success these days?
“It’s a two-tiered answer. The first part is satisfying the fanbase, because you can still fuck that up – they’ll call you out if you do something that’s shit. That’s the easier of the two things to achieve, but still a very important part of what makes for a successful record. We want to have fans coming up to us and asking to hear the new material at shows, and really invest in the new album.

“The second part, which is more like the cherry on top – and something that, if it doesn’t happen, we’ll be fine about – is having a hit song. To have a song gain real traction and become a viral or radio hit, would be great. That’s becoming more difficult for us now, because we’re not the new kids on the block, so we have a bigger hill to climb to get there. I’d love for us to break out a little from our core fanbase. Of all the songs on Harder Than It Looks, I feel like Iconic might have the best chance – I could see it becoming a bit of a sports anthem – but even if we don’t have a track on this record that gets 100 million streams, that’s totally fine. As long as the fans love what we’ve done, that’s the main criteria for ‘success’ ticked-off.”