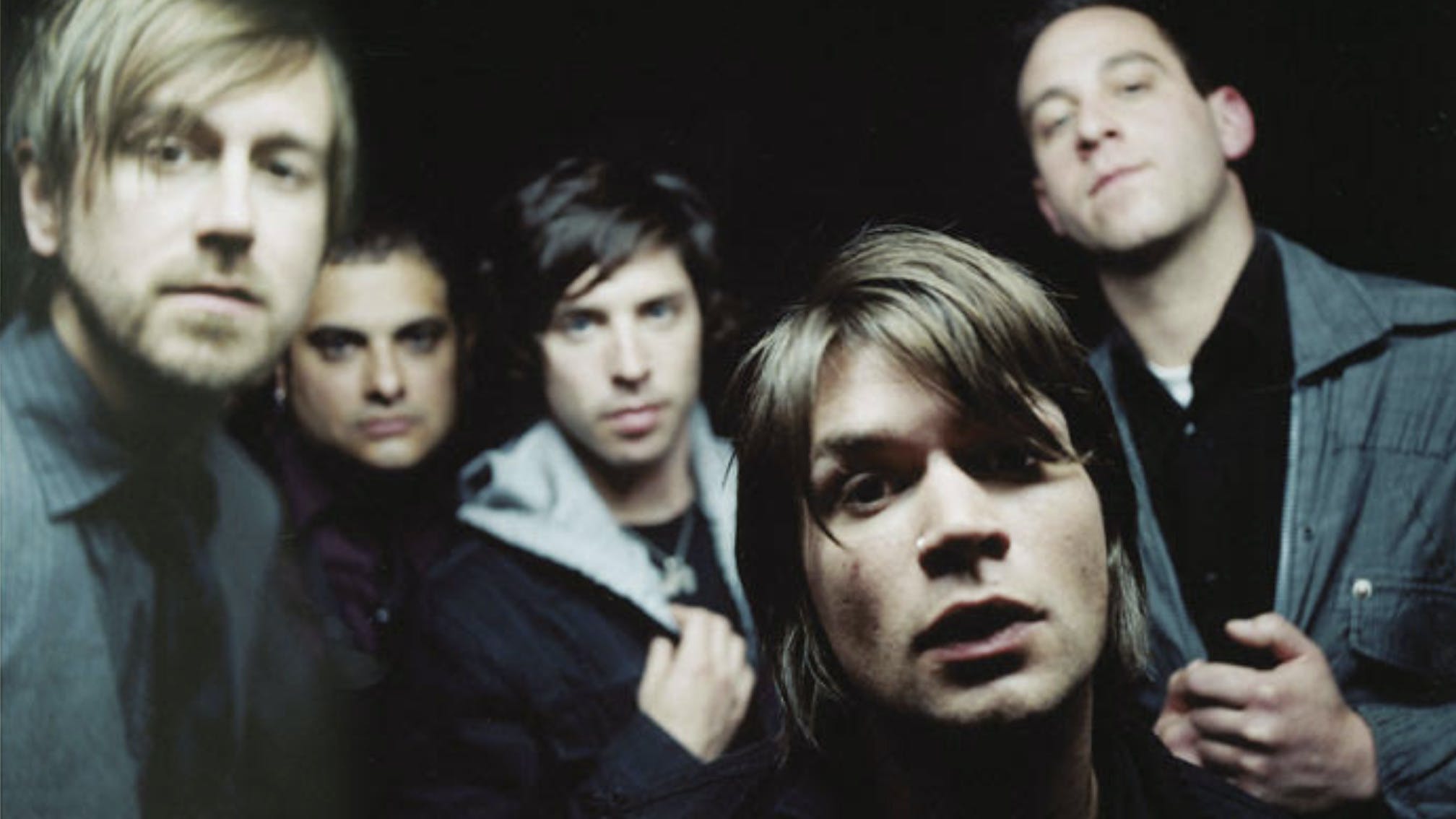 There’s one precise moment that sums up the surreal impact that Louder Now had on Taking Back Sunday. The band’s third album – their first on a major label – had been released at the end of April 2006, and singer Adam Lazzara was back in Los Angeles, where they’d recorded it the previous winter. His computer was broken, so he ventured to the Apple Store in The Grove, a popular shopping district in the city. The vocalist, who was living in Brooklyn, NY at the time, didn’t see it when he walked into the shop, but there was a giant cutout of an iPhone by the entrance, and his face was on the screen.

“The staff were like, ‘Oh, you’re that guy!’ and they gave me a sick discount,” he remembers now, laughing over Zoom from outside his home. “I remember going in and not even noticing the display, and then leaving the store like, ‘This is insane! I can’t believe what’s happening!’”

“That’s some shit!” laughs Mark O’Connell, the band’s drummer, from his house. He and Adam are Taking Back Sunday’s longest-serving current members, both in it from almost the very beginning, and both, even 15 years later, still in awe of what Louder Now did for them. “That’s got to be one of those things growing up in a small town,” he addresses his friend, “that you don’t think is ever going to happen.”

Yet it did. And it’s one of many extraordinary memories the pair have about that time in their lives. And on this Friday afternoon – Mark under grey skies in Long Island, Adam under a blue one in North Carolina, where he moved back to a few years ago now – they’re flowing as they reminisce about being wined and dined in glitzy Hollywood restaurants by record labels who were courting them, surrounded by celebrities on a regular basis.

“Do you remember,” Mark asks Adam, “when Warner Bros. took us out to dinner in LA one time, and you and I went out to smoke a cigarette in front of the restaurant and there was that actor who came up and started talking to us because he was smoking a cigarette? Was it Billy Zane?”

“Wasn’t he at [fancy hotel] The Grafton with Interpol?” wonders Adam.

“Then that’s another cool story! And do you remember when Jay Leno was the host of The Tonight Show and we were on it? We’re outside smoking and he just pulls up in his crazy car and we just start talking to Jay Leno for a minute, just because it’s normal. When I look back, it almost feels like a movie. I couldn’t believe that was our lives. It was like, did somebody fuck up and accidentally let us in here? Because this is crazy…”

Nobody fucked up, though. That not-normal existence was very much normal for Taking Back Sunday during that period. You can tell by the way Adam and Mark talk about it all these years later that they’re still in awe of it all, still pinching themselves that those things happened.

Yet while Kerrang!’s 2006 Album Of The Year took the band – completed then by guitarist and founding member Eddie Reyes, guitarist/vocalist Fred Mascherino and bassist Matt Rubano, all of whom have since left – to extraordinary places, including Number Two on the U.S. charts, making a commercially successful record wasn’t the express intention. For while they knew it was a likelihood, they were still getting used to the fact that being in Taking Back Sunday was their job.

“I remember thinking, ‘I can’t believe this is what we do!’” says Adam. “‘We just get to go in and play really loud rock'n'roll music all day. This is insane!’ So we knew that it was going to be a kind of defining moment in the life of the band up to that point.”

No doubt with that in mind, what Taking Back Sunday really wanted to do with Louder Now is reposition themselves as a rock band. Their first two albums on Victory Records – 2002’s Tell All Your Friends and 2004’s Where You Want To Be – had seen their profile grow incredibly fast, but attached to a label they’ve never been happy about. Check any interview with them over the years and there’s probably one of them saying they never intended on being an emo band, that they didn’t feel comfortable with the term or at home within the scene.

“I don’t think we ever completely felt a part of it,” Adam reiterates today, “because we would take any tour. We’d go from touring with a metal band to touring with a pop-punk band, but all we wanted was to exist in this world with bands like Foo Fighters and Pearl Jam. Louder Now was our big leap in that direction.”

“I always thought we were a punk band,” chuckles Mark. “You don’t realise those things when you’re in the middle of it, especially when you’re young. It was a surprise to me.”

“Same here,” agrees Adam. “I remember at the time saying out loud, ‘I don’t want people to say, ‘Hey you’re the guy from that emo band.’’ No. Fuck you. I’m the guy from that rock’n’roll band. I hate that shit. We didn’t want to be looked at as just part of a fad.”

That said, there are songs on Louder Now that have become staples of emo nights all around the world. People will respond as viscerally to any of the album’s first three songs – What’s It Feel Like To Be A Ghost?, Liar (It Takes One To Know One) and MakeDamnSure – as they do to Cute Without The ‘E’ (Cut From The Team), You Know How I Do or A Decade Under The Influence. But Louder Now also shifted the goalposts for the band’s sound. Largely written at their rehearsal studio near Penn Station in Manhattan, and then recorded with producer Eric Valentine in at Barefoot Studios in LA, there’s a definite sense of a band making the album they wanted to make, instead of conforming to any notion of what people thought they were. As such, My Blue Heaven, Twenty-Twenty Surgery and Miami are big rock anthems, Error: Operator is a burst of pure post-hardcore, and Divine Intervention goes against the album’s title with its gentle, almost ’70s-esque acoustic lilt. It’s Taking Back Sunday, but not as anybody really knew them. A lot of people said something to that effect about their most recent album, 2016’s Tidal Wave, but it’s something that had started over a decade before. “With Tidal Wave,” explains Mark, “we were all adults by that time, and I remember all of us thinking we can do whatever we want to. Whatever comes out is what comes out. We’re just going to do whatever we want to do because we’re us and we can.”

“But I think that’s also the same way we approached Louder Now,” says Adam. “We knew we were capable of more than just the constraints of the scene that we were in – or at least that we thought we were in – and we wanted to show people that.”

Fifteen years on, Louder Now resonates just as much now as it did back then. Both Adam and Mark are fathers these days, and life has changed immeasurably, but the album still endures, as do the memories of them making it. When the band were rehearsing its songs for the band’s 20th anniversary tour in 2019 – where they’d play Tell All Your Friends in its entirety and then toss a coin to decide if they’d follow it with a full album run-through of Where You Want To Be or Louder Now – Adam says it took him right back to the places he used to go, and more importantly, the person he used to to be.

“I remember listening to it and just feeling really proud,” he smiles. “It’s such a snapshot of those years of our lives, and those years were insane. I had to relearn Divine Intervention because we hadn’t played it in so long, and I remember recording the vocals for it on the roof of Barefoot Studios. There’s traffic going by and dogs barking, and when I listened to it I was right back there in that studio. But even the days we weren’t in the studio, we were still living in Los Angeles because we were making a rock’n’roll record. This was our dreams come true and I just go right back there in my mind. There was just this energy around it – you know when you have a wind-up toy and you’re winding it and winding it and it has little feet on it but you’re just holding the feet – that’s what it felt like right before that record came out. We were really excited, because it was a really pivotal moment for all of us, and we could feel it happening. We just had to drop it on the table.”

“It didn’t even hit me at that time, what we were doing,” adds Mark. “It wasn’t normal, but it just didn’t set in. It didn’t actually hit me until recently. You go back and you’re like, ‘Holy shit! That was crazy!’ And it still is crazy. What a thing!”