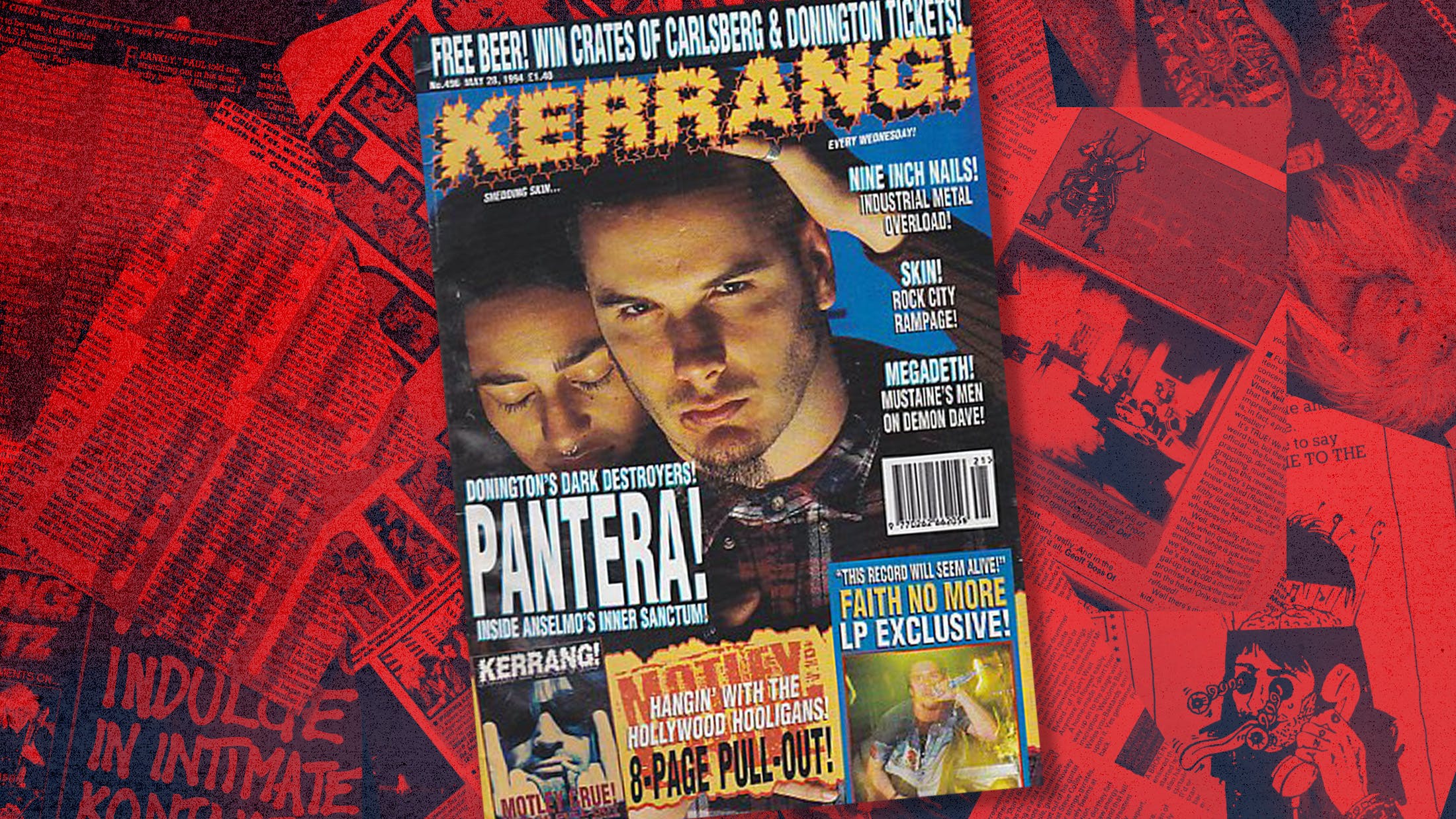 It’s back, you cry! It’s the feature when we hop in our metaphorical Delorean and take a trip back in time to see what the world of rock and metal was like in the not nowadays days.

In all honesty, it’s the time of the week where we stride with purpose over to our archive and pull a classic issue off the shelf and gawp in wonder until we realise we have work to do.

It turns out that May 1994 was quite an eventful month in the worlds of sport, politics and, um, tunnels.

Brazilian racing driver Ayrton Senna was tragically killed in a crash at the San Marino Grand Prix at Imola, near Bologna in Italy. Poison singer Bret Michaels almost suffered a similar fate as he crashed his Ferrari into a telephone pole and broke his ribs, nose and several fingers. “I was just hauling ass and lost control of the car,” he said. “I was missing teeth, it wasn’t a pleasant picture.”

Manchester City player John Stones was born – good luck in the Russia World Cup, sir – and Nelson Mandela became South Africa’s first black president. The Channel Tunnel, or ‘Chunnel’ if you’re in a hurry or just lazy, made it easier for people to stock up on cheap booze in France, while Malawi held its first multiparty elections.

And the metal world had it’s fair share of newsworthy headlines.

Following a two-week court hearing, Burzum’s Varg Vikernes was found guilty of murdering Øystein Aarseth the previous summer – better known as Mayhem co-founding guitarist Euronymous – and handed a 21-year stretch, the maximum for any sentence in Norway. Lawyers for Vikernes - who then went by the name of Count Grishnackh - appealed to the jury to find him not guilty on the grounds of insanity, but that all went south when two court-appointed psychiatrists concluded he was clinically sane and simply a nasty bastard. We’re paraphrasing here, obviously.

This week’s cover star got up close and personal with Pantera frontman Phil Anselmo, who appears to be feeding his lady friend some raw liver, like an angry bird. What really goes on in the mind of the angriest and most enigmatic “hooli-thug” in metal? Quite a lot, as it happens. Here, he reflects on Pantera’s success and the death of Kurt Cobain: “I will state that suicide’s a sad-ass thing to do. The only thing I do wanna defend on that is that I hate the pressures that I have being the lead singer for Pantera. I hate being poked at, I hate criticism. I hate my pressures and we ain’t sold a tenth of the albums they have. Selfish or not, it is no one’s place to judge that.”

Megadeth were on the brink of splitting in early 1994 and K!, like a hard-boiled sleuth, got to the heart of the matter and discovered a band who were getting on like a house on fire. “We realised we were sitting on a goldmine of talent and creative vision,” bassist David Ellefson told the magazine. "So we came to the agreement that we wouldn’t do the same shit as last year and let this end up in the toilet again.” We foolishly referred to the forthcoming album as Euthanasia. Imagine our surprise, then, as they threw a curveball and called it… Youthanasia. Sneaky.

Elsewhere in the magazine, Washington DC heroes Jawbox found themselves in Wigan that month and discovered that their thoughtful post-hardcore was not enough to entertain the mohawked punks who’d shown up. As writer Meany recounts in his live review, the crowd “got a little bored, everyone staring towards the front like they’d forgotten why they’d came”. You know what? Wigan doesn’t deserve a band like Jawbox. There, we said it.

Mötley Crüe fans were in for a treat this week as the Hollywood hell raisers were featured in an eight-page pull-out which featured no umlauts whatsoever. This wasn’t down to an oversight on our part - although we did call bassist Nikki Sixx ‘Nikk’ at one point – this was due to the new-look Crue. As the band prepared for a U.S. tour in support of their new self-titled Kerrang! assured fans that they weren’t about to serve up some “dreary post-grunge deal”. Wish they had, though.

For that week’s Kompetition Korner, Kerrang! pulled an absolute gem out of the air in the run up to Monsters Of Rock. Sure, you could win one of 10 pairs of tickets to see the likes of Aerosmith, Extreme and Pantera at Donington, but our eyes were on one of those crates of Carlsberg, which are worth about £9 in Morrisons. Probably the best competition in the world – albeit in Kerrang! that week, and on that particular page. Still free beer is not to be sniffed at.

'What’s your favourite Pat Benatar album?'
'Tough one. I think I'd have to say… The Very Best of Pat Benatar.'

K! welcomed the one-time queen of rock into that week’s album reviews and popped her best-of collection under the microscope. “Her odd image seems painfully twee nowadays, in the age of Courtney Love and L7,” reads the 3K review. Bit harsh, but you only really need Love Is A Battlefield and Invincible if you’ve been roped into DJ-ing at an '80s rock night. You know the sort, where men approaching middle-age sweat and bellow half-remembered choruses into each other’s faces.

Kerrang! used to review singles, believe it or not. This issue awarded Reverend Horton Heat and Supersuckers’ split release as single of the week, describing it as “quite marvellous”. Dog Eat Dogs’ No Fronts’ No Fronts, however, got the shitty end of the stick, as former Editor Paul Rees described the New Jersey rap-parp punks as “slightly more palatable than a poke in the eye with a dead worm”. We suppose anything is, if you put it like that.

Back when funk metal was a thing, Bronx four-piece 24-7 Spyz were given the spotlight in the gig guide as they prepared to grace London with their hard-edged slap-n-pop groovez. They’re still going strong, despite having released their last album in 2006. An album, The Soundtrack To The Innermost Galaxy – described on the PledgeMusic page as a “an aural orgasm of musical bliss” – is reportedly set for release this year. Fans will be absolutely gagging, considering the wait.

And at the back, then-Sepultura frontman Max Cavalera chose his favourite songs, which included the likes of Hellhammer, Amebix, Discharge and GBH. You know, songs you can really hump to. Ol’ Max looks fresh-faced. But then, this was back in the days when he could pull a comb through his hair without a modicum of effort.

The following week’s cover promised all the juiciest stories from Monsters Of Rock headliners Aerosmith, a shocking 24 years before frontman Steven Tyler transformed into a sassy grandma. It was also probably the only publication to feature Extreme, Brummie veterans Magnum and Ice T’s rap metal outfit Body Count in the same issue. It truly was A Different Time.

Back here soon for more retro tomfoolery and shenanigans.