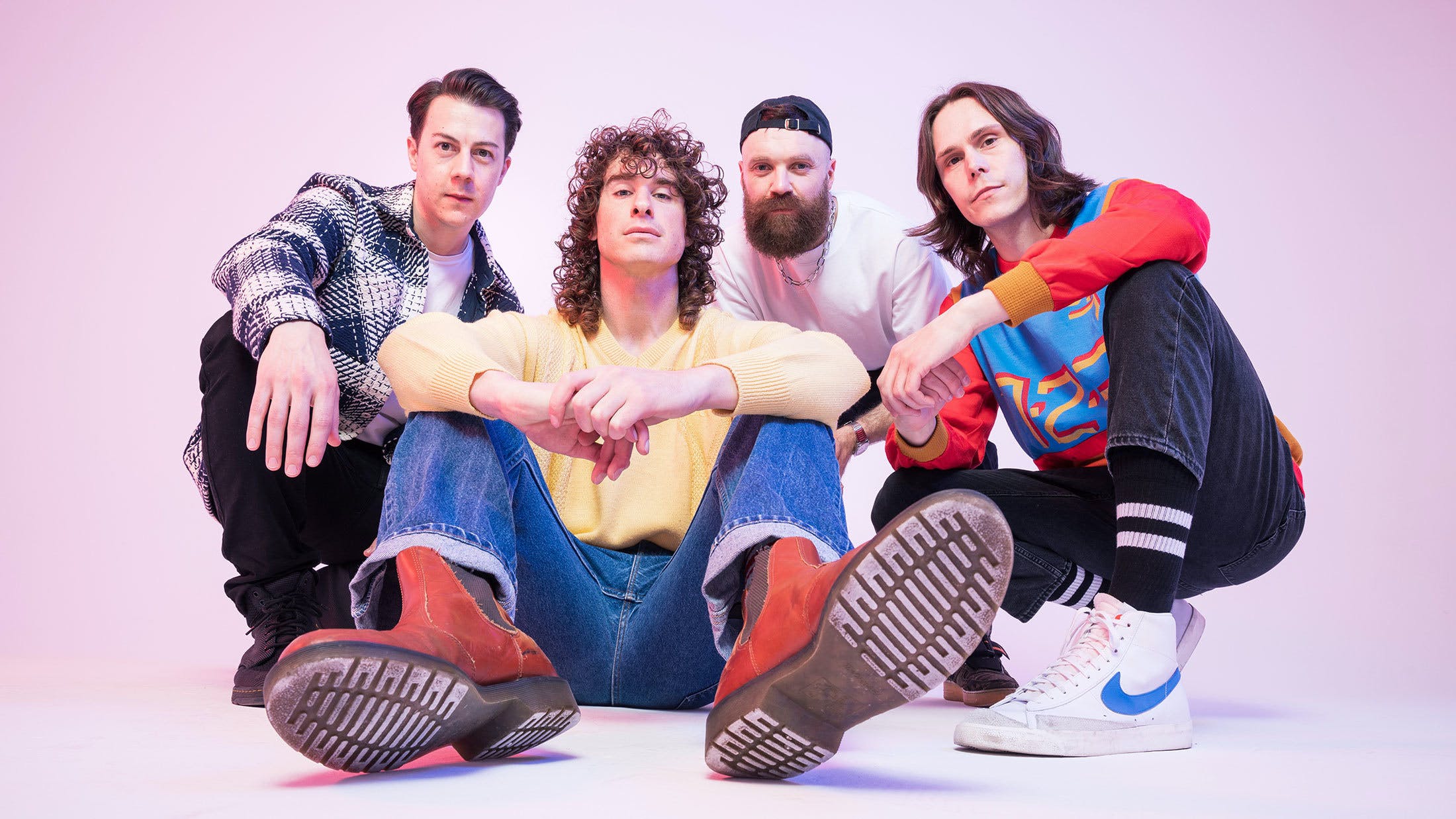 What’s the best way to begin 2022? Well, by nabbing yourself a Number One album in the UK’s official Top 40 chart, duh. Don Broco reached this stratospheric milestone in their career with the physical release of their fourth album Amazing Things just a couple of weeks ago. And now, after working their way up for the past decade, the Bedford quartet are set to add another monumental achievement to their band bucket list: they’re going to be headlining London’s iconic Royal Albert Hall. The special one-off show will be in collaboration with Teenage Cancer Trust for their charity concert series – also featuring the likes of YUNGBLUD, Ed Sheeran and The Who in 2022.

Following in the footsteps of Bring Me The Horizon, Bullet For My Valentine and Ghost, Don Broco become the latest rock band to take on this regal venue. Kerrang! spoke to frontman Rob Damiani about the occasion, what they’ve got in store, and the potential for some new music…

So, Rob: Don Broco at the Royal Albert Hall. How does that make you feel?
“It’s a proper dream-come-true, pinch-yourself moment. It is just the heritage, the history, the grandeur and it has seen so much action. It's not just played a part of musical history but it is also part of world history. I've been there to see Cirque Du Soleil and that was incredible, so it’s crazy to think we’ll be playing in a venue that has seen so much through it over hundreds of years. It’s incredible.”

You can’t do a venue like this without pulling out all the stops – so what have Broco got planned for the show?
“I think when you go somewhere like the Royal Albert Hall you want to put on something extra special, something memorable. It’s a once-in-a-lifetime-experience for us as a band and for the fans, so you want to do something very special that that you might never get to do again. We had so much fun at Abbey Road Studios putting together the orchestral version of One True Prince that we want to do that again, but on a much bigger scale: a full set of orchestral versions of our songs. That’s something we’ve wanted to do forever.”

How did you get involved with the Teenage Cancer Trust?
“We got the call from them a few weeks ago and we've been big fans of Teenage Cancer Trust and the work they do for a few years now. We've got all these random bits of broken memorabilia that we've accumulated through our career that we’ve auctioned off for them before. I think one of the best things we've ever auctioned off was our Pretty wedding suits from the video and what we wore onstage at Ally Pally. The response we got from that was incredible, and our fanbase is super-supportive of the causes we support. It was just really nice to help them out in that way. So, to take that to the next level now and actually do a concert and collaborate with them is even better.”

The concert series also features the likes of YUNGBLUD, Liam Gallagher, Madness and more. How does it feel to be included alongside those names?
“We are super-excited to be part of this line-up! There’s a lot of our heroes on it who are the reason we’re doing music today. Liam Gallagher, in particular, he was probably one of the first ever musicians I remember seeing and thinking, ‘Wow, I want to do that.’ I remember it so vividly; it must’ve been in school and I remember us learning Wonderwall thinking I was an absolute legend because I knew the words! So yeah, having Don Broco on a line-up as strong as that and seeing your name on the same poster as those acts is just insane.”

You’ve recently had more good news, with Amazing Things hitting Number One. That must feel pretty special – especially given the album came out digitally last year?
“Yeah, I am super-proud. I'll never forget that moment of getting the phone call and realising that we've got that. I had this feeling of being so grateful to our fans – it was that feeling of, ‘Wow, we really did this together.’ It was a feeling of appreciation to all the hard work we've put in for all these years and that our fans are there with us. It was just overwhelming. It’s kind of quite silly, this whole chart position, because it doesn’t mean everything but somehow it still does mean a lot when you've kind of got that statue and what it represents. It’s not just one album but it’s a whole career of hard work leading to that point.”

Broco will be hitting the road soon too, having just announced a massive tour of the U.S. and Canada. Does it feel good to be getting back out there again?
“Yeah, definitely! We're really hoping that everything's going to go ahead but things seem to be looking good in the States. We're not going to be touring again in the UK this year as we did the tour at the end of last year and we have just finished off the album release shows. We're just hoping – fingers crossed – that the American shows can happen and then we can get back out to Europe, too. Obviously, the world is at very different stages with the management of COVID, but if we can get out at least in the summer to a few places in Europe and get some summer festivals done that’d be great.”

Finally, have you been thinking about any more new music at this point?
“Originally we thought we’d maybe have some time between now and the U.S. tour to start thinking about new music, but then we got the call from Teenage Cancer Trust about the show and were like, ‘That’s not going to happen.’ Now, we're going to be in mad rehearsals because we want this to be incredible and we've got to figure out the arrangements for a whole set of songs and work out how to fit an orchestra. I think that's going to be taking up our time now until the show. We've definitely got ideas for [new] songs, though – we’ve always got ideas knocking about, and where it’s been long enough we're definitely hungry to start writing again…”

Don Broco will play the Royal Albert Hall on March 21. Tickets go on sale this Friday, February 25, at 9am.