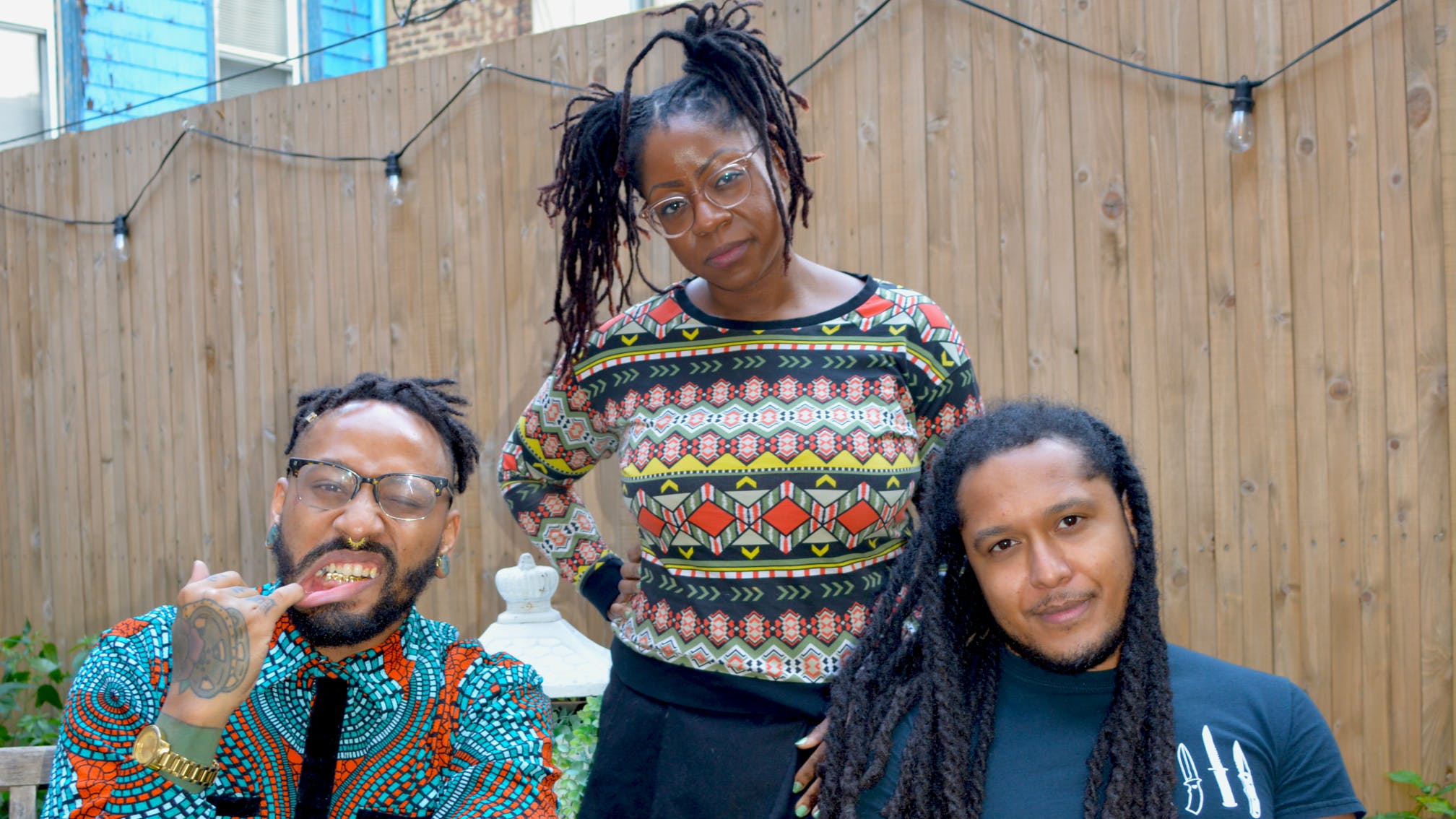 “Our bio says, ‘Just three n**gas making prog rock, don't overthink it.’ It's been changing with our sound,” frontman Erik Garlington laughs. Originally named the Great White, Proper. are a collective accustomed to change. And as the trio – completed by Natasha Johnson and Elijah Watson – have continued to pave their way in the alternative scene, they’ve become even more forthright. After being told they “talk white… like, real proper”, the band switched up their name and ran with it. Now, in their latest polemic American epic, Proper. ditch their off-hand humour and embark on unravelling the emotional weight behind everyday Black American identity.

Having played emo, pop-punk, hardcore and everything in-between, Proper. are continuing to carve their own sonic stamp. Like they say: don’t overthink it. So, hot off the heels of their recent, Bartees Strange-produced record, The Great American Novel, we sit down with Erik to chat about new music, Black visibility in the alt. scene, and what it means to be American in today’s age…

You’ve been in bands across the alt. scene from a young age. How much of a die-hard do you consider yourself?
“I discovered emo pretty late. I was like a metal prog kid, which is notoriously standoffish and just straight white dudes being straight white dudes. There's not really a place for you. There's this band that is coming up in Kansas City and one of the lyrics was, ‘Get back in the kitchen, bitch.’ I was like, ‘Does that not feel sexist to anyone else?’ So then I discovered emo and these little house shows in basements where everyone's singing along to this band from places like Kalamazoo, Michigan. As a person that moved around a lot, being in a military family, I felt like, ‘This is what a family is supposed to be, and this is what a community is supposed to be like.’”

Who was it that inspired you to get into music?
“The reason I picked up a guitar is Coheed And Cambria, which is led by a Puerto Rican American Claudio Sanchez. I discovered Coheed and At The Drive-In within six months of each other, so it was like, ‘Wow, people that look like me can do this!’ Then, when Dance Gavin Dance came out – with Will Swan, who is Black – I was just like, ‘Oh my God!’ I've never heard guitar parts so proggy and insane. Right after that, it was Protest The Hero who, at the time, had an Iranian bassist and he was the primary lyricist. It was a quick four bands, one after the other, showing me that Black and Brown people can do it. So, I was just like, ‘Why don't we give it a shot?’”

How are you finding it so far, then?
“I wanted to make music that I didn't grow up hearing – especially growing up during the Hot Topic era, with all the metalcore and Christcore bands. I really wanted someone like me in a story for once. Then I had that Thanos moment where I was like, ‘I'll just do it myself.’ So here I am, and it’s somehow working out for me.”

Have you learned any rock’n’roll lessons along the way?
“From a musical standpoint, I would probably say that networking isn't everything anymore. If you surround yourself with people that you think are genuinely talented, and that you believe in, it's going to pay off if you do tours – instead of bands who have 20,000 followers on TikTok. There’s a drastic difference. The internet is fake. I go through this a lot when I’m like, ‘Proper. only has 10,000 monthly listeners. Why isn't that 100,000?’ But 10,000 people listen to my words and I get down on myself about that, and that's where the internet being fake comes in. A fan said to me, ‘I showed one of your songs to my dad, and I think our relationship is better now,’ and those things are what matter. Surround yourself with people that want to make you and others feel less alone.”

There’s been a lot of change in the scene and on the screen. What do you think about the shift in U.S. pop culture?
“It's definitely one of those things where I have to look at the few good things instead of just all the bad. Orange Is The New Black premiered almost a decade ago and Laverne Cox is still getting roles. She was in the Rocky Horror Picture remake, so it’s not a one-off thing. It's seeing Hunter Schafer, from Euphoria, for my little brother's generation. It's very affirming to see, for me, looking to the next generation. I had to fight tooth and nail with my parents about abortion access or who cares if someone’s trans or not. Seeing all these queer artists, trans artists, and not being silent like Lil Nas X. Things in the entertainment world are keeping me afloat. It's the little victories that keep me going.”

What about in the alt. scene?
“I never thought I'd be someone that people look up to. I see myself as a fuck-up who runs his mouth too much. When people say that our album means a lot to them it is weird. But, it's also great to see, in the last five years, all of these Black and Brown bands coming up. It brings a tear to my eyes when I think about it because, when I was in high school I couldn't find that. It's really amazing to be a part of this renaissance of Black rock. I'm very grateful to be here right now.”

What inspired the lyrical direction of your latest album, The Great American Novel?
“The first two records had a bunch of tongue-in-cheek jokes and funny song titles. We wrote this record in lockdown and I wasn't feeling very happy. For me, my stimulus check took months to arrive and our landlord was telling me to take out a credit card to pay rent. I'm in New York and I can't just take out an $8,000 credit card… it was a lot. The one constant in my life is that I've hated it here, so [I thought] maybe I should talk about that. The first two records are very zoomed in on me and my journey, and I wanted to zoom out about America as a whole and why I am the way that I am. People usually think you can live anywhere as long as you listen to these bands and like this music, but, for me, my upbringing was so American Southern that I don't think I can be me anywhere else. I wanted to take all the things that make me who I am and talk about them through the lens of a singular character.”

Did you encounter any big personal revelations while writing this record?
“I definitely had a lot of realisations. I've been playing music for so long and I think a lot of musicians will be with me on this: they're always like, ‘This is the album that's going to blow up and take me to the next level and then I don't have to worry about anything ever again.’ I definitely had that thought process up until lockdown. I realised how quickly music can stop. I know people with a million monthly listeners on Spotify and they had to find a job at a gas station. I love music, but I think I'd much rather it be a hobby. It was a cathartic experience talking about this country in the sense that I'll never have health insurance. I'll never retire. I'll always have to be doing something to try and get one over on the man, and it made me look, internally, about what I want to do with my life.”

What’s it like being an American right now?
“The same: bad. It's always felt this way. I grew up in Mississippi, South Carolina and Alaska. I've been throughout Georgia and Texas. I'm used to this sense of hopelessness. I'm used to my leaders not giving a shit about me. So it's been interesting to move up north to New York and see people be shocked that this is how it is. I'm trying not to become more cynical. At least I'm prepared for this happening. Mississippi is not a great place to be and I felt guilty that I left, but I could not live there. I couldn't dress the way I dress. I couldn't talk the way I talk. I couldn't do what I do. I feel guilty about abandoning it, but it's definitely that same numbness that comes with being an American that's been at the heart of all the bad stuff. A lot of my white friends in New York happen to be from Connecticut, Massachusetts and they say, ‘This isn't the America I grew up with,’ but it's always been this way.”

What are your plans for the future?
“I want to focus on building our team for the next one. Right now, we're seeing where this album is going and trying to get some more good support slots. We really want to go to Jamaica or Mexico. We want to go to Black and Brown locations to tour – no offence to Europe and the UK! I've always said that the first two albums are like our two EPs, and this is our actual debut. We're definitely trying to pump this one out and get as much as we can from it.”