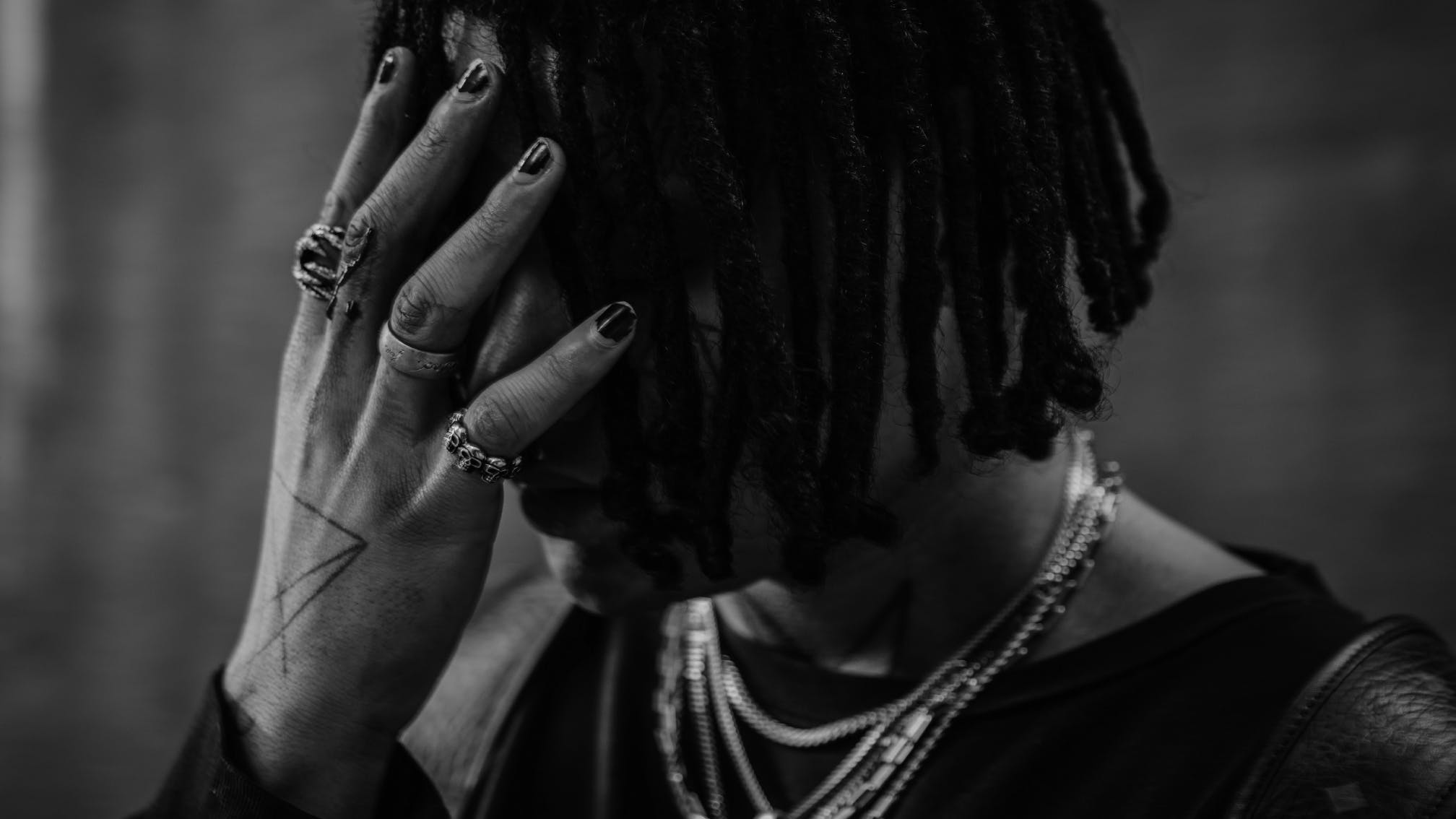 “Yesterday was a breakdown night. I didn't tell anyone that,” the 20-year-old reveals in a deadpan tone. “It was a total breakdown. No one would know. I have those often, though. [It's] like an identity crisis.” A new-wave solo artist, Canadian artist EKKSTACY is the self-labelled rockstar battling his personal frustrations and eager dreams.

Right now however, EKKSTACY is on the road, and has just woken up somewhere in Philadelphia.

“I kind of feel like shit. No, I'm fine. I'm okay. I did just wake up,” he mumbles. It’s early hours for the musician and he’s got a busy schedule ahead. Alongside a buzzing tour, EKKSTACY also has a looming deadline for his upcoming album,. “The new record is due in two days and I wouldn't say it's finished,” he shrugs. Neither a fan of concept records nor his current sound – describing it repeatedly as “boring” – alongside the semi-amusing line of quitting music entirely, the young artist is deep in the space of figuring things out.

Here, in the latest instalment of our weekly Who the hell is? series, we chat with EKKSTACY to find out more about his new record, his plans to escape Canada, and more…

How are you feeling today?
“I'm touring in America and doing the whole thing in a fucking minivan. The rest is terrible except when you're onstage. It's all about drinking – I couldn't do [it] without the alcohol.”

Have you always been interested in pursuing music?
“Kind of; since I was in grade eight, so about 14. There's other stuff I wanted to do before that – I wanted to skate. There's some other stuff but I don't want to bring it up, stupid little hobbies. I wanted to be a sculptor… I'm joking.”

When did you realise you that music could be a career rather than a side project?
“When I was 14, I tried and it was really bad so I just gave up. Then, once I was in grade 10, I had a friend who was doing music and he would bitch to me every day to try again and I kept saying no, because I was scared. Then eventually I could do this. There's a lot more to that story, but I don't really want to get into it.”

As a Canadian artist, what is it about Canada that resonates with you?
“I hate Canada. It sucks. I go to Canada for two weeks maximum and then, after that, I'm like, ‘Oh my god. I need to get the fuck out of here’. I'm moving to Berlin, though. I've done everything you can do here like ten times.”

Why Berlin?
“It was kind of impulsive, [much] like everything I do. My producer lives in Berlin and that's pretty much the main reason. I want to live with him so we can work better.”

Your music delves deeply into personal and emotional experiences. Do you consider how your lyrics resonate with your audience?
“My music sounds really different to me than it probably does to every single other person that's ever heard it. I really have no idea what people think – I don't even like my music. I don't understand any of this shit. Half of the shit that's going on doesn't make any sense.”

How would you describe your music in a handful of words?
“At this point, boring, boring and fucking even more boring.”

You don’t seem too happy with the current alt. indie-rock sound…
“The new stuff is different, but I'm also getting really fucking bored. I'm gonna either switch everything or quit. I'm not having fun right now. Actually, that's a lie. I was having fun when I was in Vancouver making music. Maybe I'm just having a bad day.”

A lot of your songs have performed really well, with all of your videos hitting hundreds of thousands of views on YouTube. How do you feel about the reception of those tracks?
“I don't really care what anyone really says about my stuff. I really am grateful for everyone and I appreciate everyone, but I make music for myself. There are a lot of people that make music so people feel less alone and blah, blah, blah. I just do it because it's fun. It helps me get through life. I don't do it for anyone else, so when I'm not having fun and I'm not doing what I want to be doing it totally just becomes a chore. I could be making music that I hate and if everyone likes it I'm still going to be sad.”

You’ve talked a lot about being bored with music. Do you find a release in the art you make?
“I'm pretty lost most of the time with this shit; I think that's what it is since I don't really care about appealing to anybody. It's just me and I can't stick to one thing for very long at all, so it's a lot of work to keep myself happy. It's impossible, actually.”

As a breakout artist, has the growth in your career helped offer direction some direction?
“Yeah, definitely. For now, maybe I'll wake up one day and say, 'Fuck music. I'm quitting and I'm never making music again.' That could happen. But then I'll go there and I'll be like, 'Oh, God, I shouldn't have done this' and fly back to LA.”

What artists have inspired your new direction?
“Definitely The Drums. I used to be scared to say I have influences, but fuck you everyone does. Don't be a pussy and don't be scared. You're not some crazy unique artist from space who has no inspirations. It's cool, honestly, to say who you like.”

Could we expect a concept release?
“I don't like concepts at all. I haven't been through something traumatic enough for me to make an album that has a deep concept. In all the best albums, someone is talking about something very important to them and that's what Negative was. [This] is different. It's not a story. It doesn't have a concept. It's more all over the place [and] it's fucking sick. I really like some of the songs. Christian Death is my favourite song. It's really fucked up, it's a little scary.”

Have you got any next steps planned or do you plan on quitting for real?
“It's a surprise. I'm doing this new album right now and it's not indie. It's more goth and punk, but still melodic. It's not heavy but I might try and do something completely new. If it's fun then I'll do it. But if it sucks then I'll keep making rock variations and completely switch genres. I grew up on trap music… sometimes, I feel like I'm straying farther away from God. Just kidding, I'm not religious. I want to do something that will have crazier shows. Obviously there's metal, but I don't want to make metal.”

EKKSTACY shares new single, i want to die in your arms

Listen to EKKSTACY’s poppy, post-punk single i want to die in your arms, taken from his upcoming second album Misery.