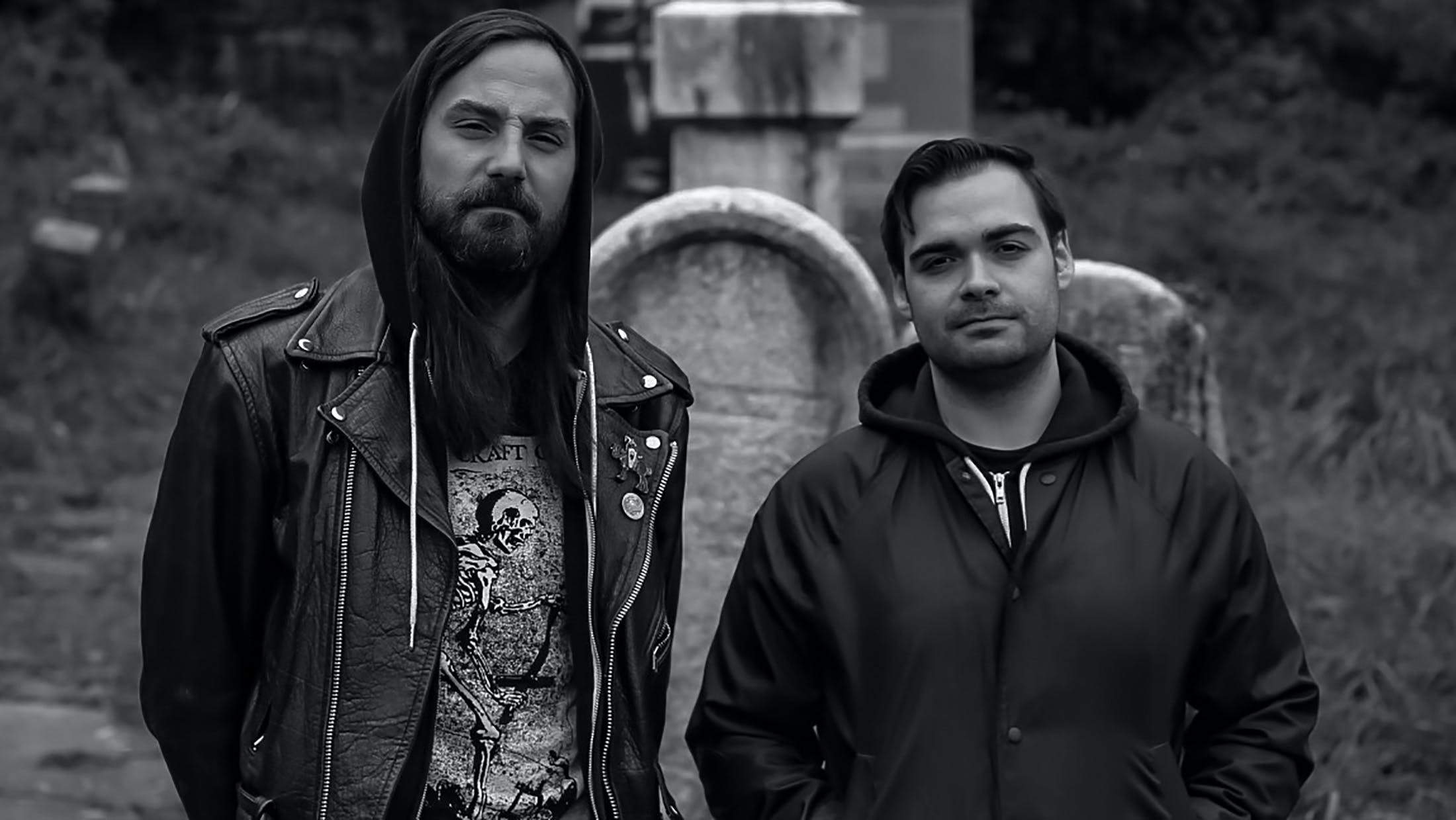 Alex Rosamilia thinks a lot. It tends to leave his head in a bit of a spin. Started after The Gaslight Anthem went on hiatus in the summer of 2015, Dead Swords is the first band Alex has ever fronted and is his attempt to make sense of all those thoughts.

The group – completed by Corey Perez (Bottomfeeder, I Am The Avalanche, Let Me Run) and a cast of other musicians when playing live – released their first EP, Skeletons…, in November 2016, and followed it up with another called Broken Souls the following March. Both musically and lyrically, Dead Swords is an overwhelmingly bleak experience; a barrage of loud noise and a wall of forlorn guitars that incorporates elements of shoegaze and doom while also recalling The Cure at their most lugubrious and Nine Inch Nails at their most existential.

The band’s debut album – which you can stream exclusively below – acts as a searching journey into the darkest corners of Alex’s mind as it confronts his deepest fears about mortality and existence. It’s a bold record full of stark, funereal beauty that twists and turns in agony and despair, with a heavy dose of existential despondency. That might surprise anyone expecting it to sound like The Gaslight Anthem, but it is, he says, the truest and most accurate representation of who he is as a person and a musician.

Why did you start Dead Swords?
Gaslight made a choice to not tour as much. Everybody wanted to take a little break and Brian [Fallon, Gaslight frontman] wanted to work on solo stuff, so I figured instead of sitting on my rear I would try to write some songs. I’ve always written songs, even though we’ve never used any for Gaslight – all my stuff was usually a bit slow and a bit long, funnily enough. But nobody is pushing the envelope in music anymore – they just make what they think things should sound like. So the idea was that I wanted to write songs with substance. I don’t think a lot of music does that anymore. And on top of that, lyrically, I felt music had gotten a little stale. No-one was morose anymore. At least, from what I could see, there was no really depressing music, which is my favourite kind!

You tackle some heavy subjects on these songs…
I wanted it to make you think; to sit on the words I’m saying and let it percolate a bit. These are things that I think about and maybe other people do, too. I wanted to write about the fact that these ideas exist, but I don’t want it to be a good thing that they do. I talk about being suicidal or being depressed, but I don’t talk about wanting to do it, I talk about feeling that way. That’s stuff I’ve struggled with throughout my 37 years on this planet. But there should always be hope. It’s too depressing without hope, because it’s still depressing with hope!

If you didn’t have Dead Swords, what would you be doing to get that stuff out of you?
I don’t know, man. Drugs? Seriously. Before I started writing these songs, I didn’t really have an outlet. My outlet was drinking and I’d been lucky enough to have a job that kind of promotes that throughout my twenties and half of my thirties. That might be part of the reason it happened, when we slowed down and stopped working, because I was home and not drinking as much and I felt, ‘Man, this is getting even more depressing.’ And I needed another outlet. I decided I wasn’t going to use alcohol, so it started coming out in songs instead. Man, that’s fucking sad. Honestly, I’ve never thought about that before, but the real reason I started writing these songs was because I didn’t want to drink. And that’s not saying I don’t drink, because I thoroughly enjoy it, but I need to do something to deal with the stuff going on inside my head.

You’re adamant that this isn’t a side project. Is Dead Swords your main focus now?
Yes. This will happen until I don’t happen anymore, which is fittingly morbid. But it’s obvious at this point that Gaslight isn’t a full-time thing anymore. We’re not dead or broken-up, but we’re not going to be touring every year. And I still want to do that, so instead of looking for something else to join, I decided I wanted to do my own thing. And I realised that I knew enough people to get it off the ground and hopefully it has enough momentum to keep going. But even if it’s not financially feasible, I can still make a record and release it digitally. I feel comfortable writing music now, so this is going to be my outlet for it.

Some of the songs on the previous EPs you’d written a long time ago. Is that the same case for the album?
No. I finished the EPs and then I started writing this stuff. It was the beginning of 2017 when I started working on it and then my grandma – my last remaining grandparent – passed away and that caused an existential crisis. Because in my head it’s like the whole system has changed. The last in line is now my parents’ generation and so my brain goes to all these weird places; time doesn’t stop for anything, life is finite, you only have a tiny amount of time to do what you want to do. All these things hit me and I stayed up till four in the morning trying to figure shit out. And that’s when all the lyrics started coming out and why most of it is about death and what happens afterwards, because that was heavily on my mind.

And of course, the older you get, the more prevalent death becomes in your life…
And I feel like nobody talks about it in a social forum. So that’s another reason I decided to write about these things. Nobody else is.

Which kind of fits with the title of the album, Ender – that these are all meant to be final album songs. But what made Ender the song that’s the ender of all the enders, so to speak?
Lyrically, it’s a culmination of stuff I’ve been writing about prior to this record. Both verses are talking about topping myself, and then the pre-chorus is me figuring out what happens afterwards. And then the chorus is me telling myself to just deal with what’s going on and go on another day.

So, then it’s also literally an ender in terms of life, if it’s a suicide song?
Yeah, it’s about pulling yourself out of that hole. The point to it is that you shouldn’t feel weird feeling that way, but don’t let those feelings take you over the edge. It was inspired by Logic, who released a song whose title was just the phone number for the Suicide Prevention Hotline. I didn’t want to be that upfront about it, but I didn’t think it was a bad idea, especially – and I’m speaking to myself – if you’re somebody who deals with that on a regular basis. And there’s plenty of people who don’t know how to fucking deal with that.

Has writing these songs helped your mental health?
Immensely. I was in a rut emotionally, and writing these songs gave me the kick in the ass to get past it. I’ve always felt writing was very therapeutic. It’s the ultimate form of catharsis. I’ve gone to therapy, like everyone else that feels that way, and that helps a bit. This kind of works in the same way. Even if you’re not telling anybody per se, you’re writing it down, you’re expressing it – and every time we go through it when we play live it’s a cathartic experience. Growing up, I was always writing my own stuff, but I felt I always fell short lyrically. I was always trying to write love songs and I wasn’t using the imagery that comes easiest to me, which is the doom and gloom. So I came to accept that I should write about the things I feel the urge to write about.

Has writing these songs helped you navigate your way towards a better place?
I wouldn’t say it’s getting me out of it, but it’s making it easier to know that I’m there, for lack of a better way to put it. A lot of people don’t admit that that’s what’s going on – or want to admit that and so it affects them even more than if they were like, ‘Oh, this is this again. Let’s get through it.’ Sorry – that got really heavy. But my real point for this band is that it’s okay to feel however you feel – just make sure you don’t let those feelings take you to a place you can’t come back from.