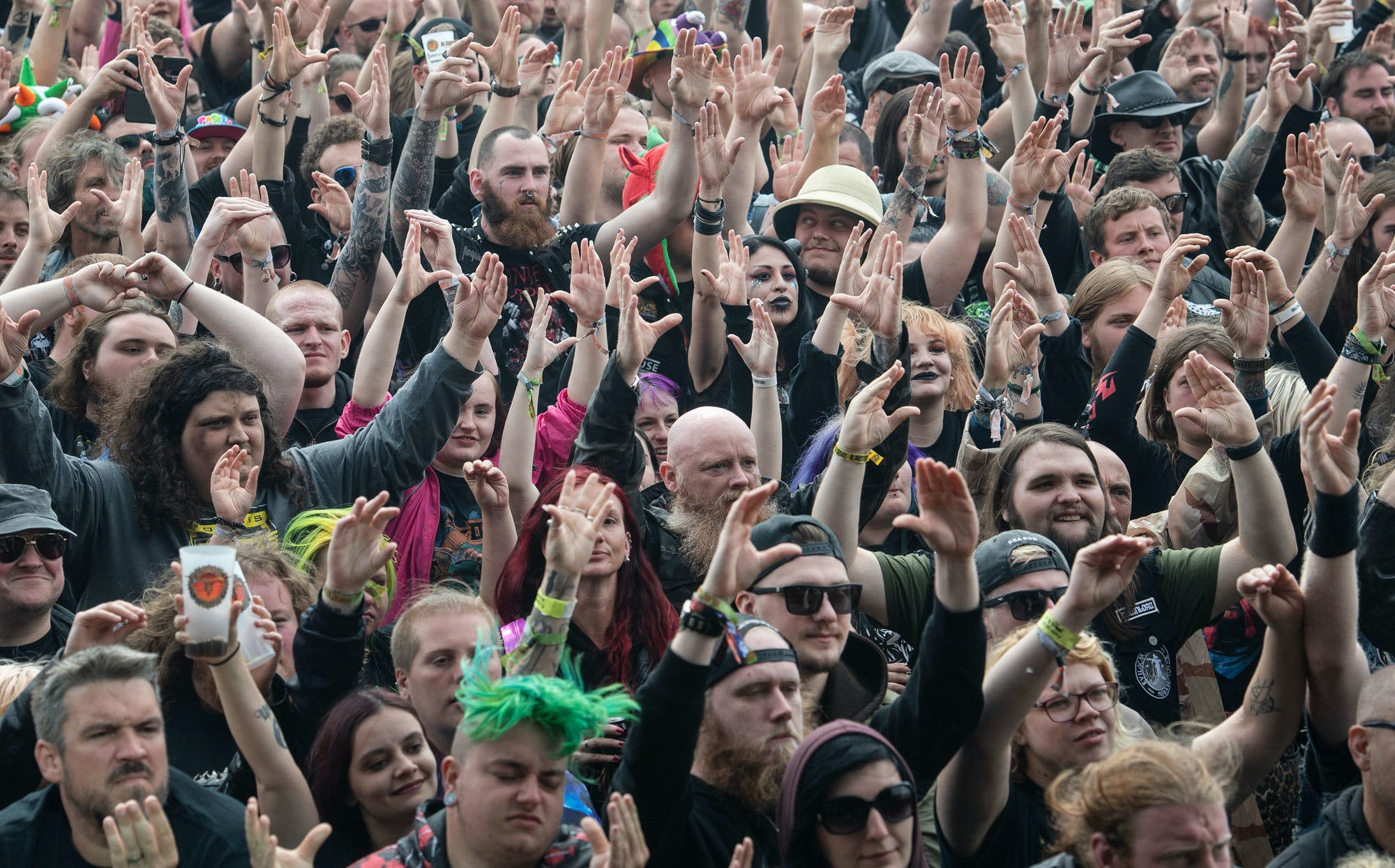 It's not even noon. The big screens have had to be lowered due to strong winds and the floor is a muddy skating rink underfoot. As Cancer Bats crank out their equally sludgy riffs however, a crab pit morphs into a frantic swirl of humanity that includes at least one wizard, Buzz Lightyear, Yoshi and more battle vests than you can easily count. Frontman Liam Cormier thanks the UK's biggest metal community for being so welcoming of one of the only hardcore bands on the bill, before launching into Black Sabbath's War Pigs to rapturous applause.

As you might expect from the UK’s premier pure(ish) metal festival, Bloodstock has its off-the-leash side; there are raucous pits throughout the weekend and plenty of drunken shenanigans on the campsite. Moments of madness aside however, the festival as a whole has a wonderfully relaxed and friendly vibe.

This is partly due to the compact size of the site. Set in the leafy environs of Catton Park in Derbyshire, it’s a different experience to the vast muddy plains of Download.

“What we do is very different to Download,” nods Bloodstock director and main booker Vicky Hungerford. “Download is a brilliant event and they're good friends – those guys come to Bloodstock every year. The industry isn’t big enough for that sort of rivalry anyway, there’s room for both festivals.

“It's been our intention not to get it past 20-25,000 because you're in Download territory then. You're having to bring in those Download-sized headliners to sell tickets and if we get too big, you lose the feel of what Bloodstock is. We want it so it's not a ridiculous walk between the arena and the campsites, or the main stage and the Sophie stage. We don't want you to have to miss bands because the walk is so big. People like how close everything is.”

Speak to anyone involved with the event and you’ll hear about ‘the Bloodstock family’. This is a literal thing in part. Vicky’s dad is co-founder Paul Gregory, who has been involved with Bloodstock since its inception as an indoor event in Derby back in 2001. Vicky says that at 70, he’s now a bit less hands-on, but it’s his kids that still run the festival.

Simon Hall is the sole non-family member to work with Bloodstock full-time. He runs the Metal 2 The Masses programme, is the production manager for the New Blood, Sophie Lancaster and Jagermeister stages and works with Vicky on the bookings. “I wash the dishes occasionally as well,” he adds.

“It’s got that tagline ‘by the fans for the fans’ and that’s what it is,” he continues. “It was started by a bunch of people that love heavy metal and that’s how it’s continued. Everyone that’s involved in the booking and the stage management is a fan of metal. It’s about providing the best festival in terms of bands but it’s also about welcoming back family every year.”

When it comes to booking those bands, Vicky says there’s a difficult line to tread. “It’s the most horrendous role sometimes because you’re always getting flak,” she sighs. “We try to make sure we bring in bands that have never headlined a festival before in the UK or who rarely play the UK or rarely get to play a main stage slot. We have to get the balance right though. We’ve got to sell tickets, people have to understand.”

Sabaton are one such band playing their first festival headliner on these shores, which is apt as it’s a festival they’ve grown alongside, progressing from the foot of the bill to main stage headliners across four appearances.

"It's a great size for a festival and the atmosphere in the field is always great," says vocalist Joakim Broden, speaking a few hours before their spectacular set. "It's the UK's only real metal festival and it feels more like a mainland European festival in that respect. Most of the people who come here are real metalheads so I think it's really important if you do love this kind of music. It's great to get to come back and bring everything we can fit onto the stage, which we've never been able to do before. There's a good chance this will be the most bombs and fire Bloodstock has ever seen!"

Another band who have appeared multiple times, becoming a Bloodstock institution in the process, are Evil Scarecrow. You haven’t experienced Bloodstock until you’ve been in an Evil Scarecrow crab-pit, witnessed 10,000 people doing the Robototron dance or revelled in the sheer ridiculousness of their Blue Peter metal stage show.

"We're more festival staples, adds guitarist Brother Pain. "Like potatoes are part of a staple diet. We're the potatoes and rice of Bloodstock. Nobody really wants it but you'll eat it if you're starving. We're like the ad breaks in between all the genuinely world class metal bands that play at Bloodstock every year.”

As Vicky has pointed out, not every band they book is universally popular and some people have their own narrow ideas of what a ‘Bloodstock band’ should be. When Saturday’s headliners Parkway Drive were first announced, certain parts of the internet reacted as if the festival had said it was going to sacrifice cute, fluffy animals onstage for two hours instead. Or are we thinking of Watain’s set last year?

“I think the problem is that sometimes the minority can be incredibly vocal,” Vicky sighs. “I was embarrassed by some of the reactions. Some of the comments we were getting were ridiculous. And it’s always the same – Parkway will play, they will absolutely level Bloodstock and everybody will say it’s one of the bands of the weekend.”

She’s not wrong. Despite the threat of severe weather that saw Cradle Of Filth's set postponed, Parkway’s set is one of the most explosive Bloodstock has ever seen – both literally and figuratively - and it goes down a storm with the vast majority of the crowd.

It’s spectacular, but Bloodstock isn't all about the big hitters on the main stage. The Sophie Lancaster stage (which pays tribute to Sophie and supports the Sophie Lancaster Foundation – please check them out) offers a platform to smaller bands from all over the world and from every part of the varied metal spectrum.

"We first played two years ago and just playing put us up a big step," says Boss Keloid frontman Alex Hurst after their own stunning set of unclassifiable, sort of techy, sort of prog-sludge. "And I think a lot of people come for the underground bands. We're not really a traditional sounding band. We're a little bit weird, oddballs. Two years ago we had people telling us they sort of stumbled on us and really enjoyed it.

"The way they treat bands is phenomenal as well. You open your vehicle and people start lugging your gear for you. That's beautiful."

The festival also has a New Blood stage that is fed by the wider Metal 2 The Masses programme. This now comprises nine slots per day, the majority of which are filled by the winners of 31 regional heats held throughout the UK, Ireland and parts of mainland Europe including Norway and Poland. As well as the bands playing this weekend, there’s a knock-on effect that benefits the venues and local scenes that participate.

“The New Blood stage is the heartbeat of the festival for me,” says Simon. “I think it’s vitally important that we give these bands a leg up. For some bands playing at Bloodstock is the zenith, but a lot of them get a taste for it. They get a different mindset and want to take it further.”

That was certainly the case for Kilonova. The Newcastle thrashers won through Metal 2 The Masses to play the festival last year and have since gone from strength to strength.

“I remember just before going onstage feeling extremely nervous, my parents said I looked so pale they thought I was going to be sick,” recalls vocalist Ellen Hill. “Bloodstock was our sixth show as a band, so it basically threw us in people’s faces whether they liked it or not. I’d say it gave us the drive to work a lot harder because if we managed that in such a short time who knows what we could do in a year or so - which turned out to be putting out our debut EP and building a great local following.”

So what makes Bloodstock such a unique and special festival? There are many different answers to that question depending on who you ask, but for Vicky it all comes back to that family feel.

The community vibe, it's incredible,” she says. “We've had people who've got married after meeting at Bloodstock, people make friends that they go back and see every year. We've had the same crew and security for years so you even see the same faces there.

“It's gone from 700 people and it's been built with blood, sweat and tears. We've not always been the most perfectly-run festival. We've made mistakes but as long as you’re transparent and you hold your hands up, I think people are okay with that.”

In the 14 years since Bloodstock Open Air was first established as an outdoor festival, there have been far more hits than misses and it’s established itself as a huge and vital part of the UK metal scene. Horns aloft and long may it continue.