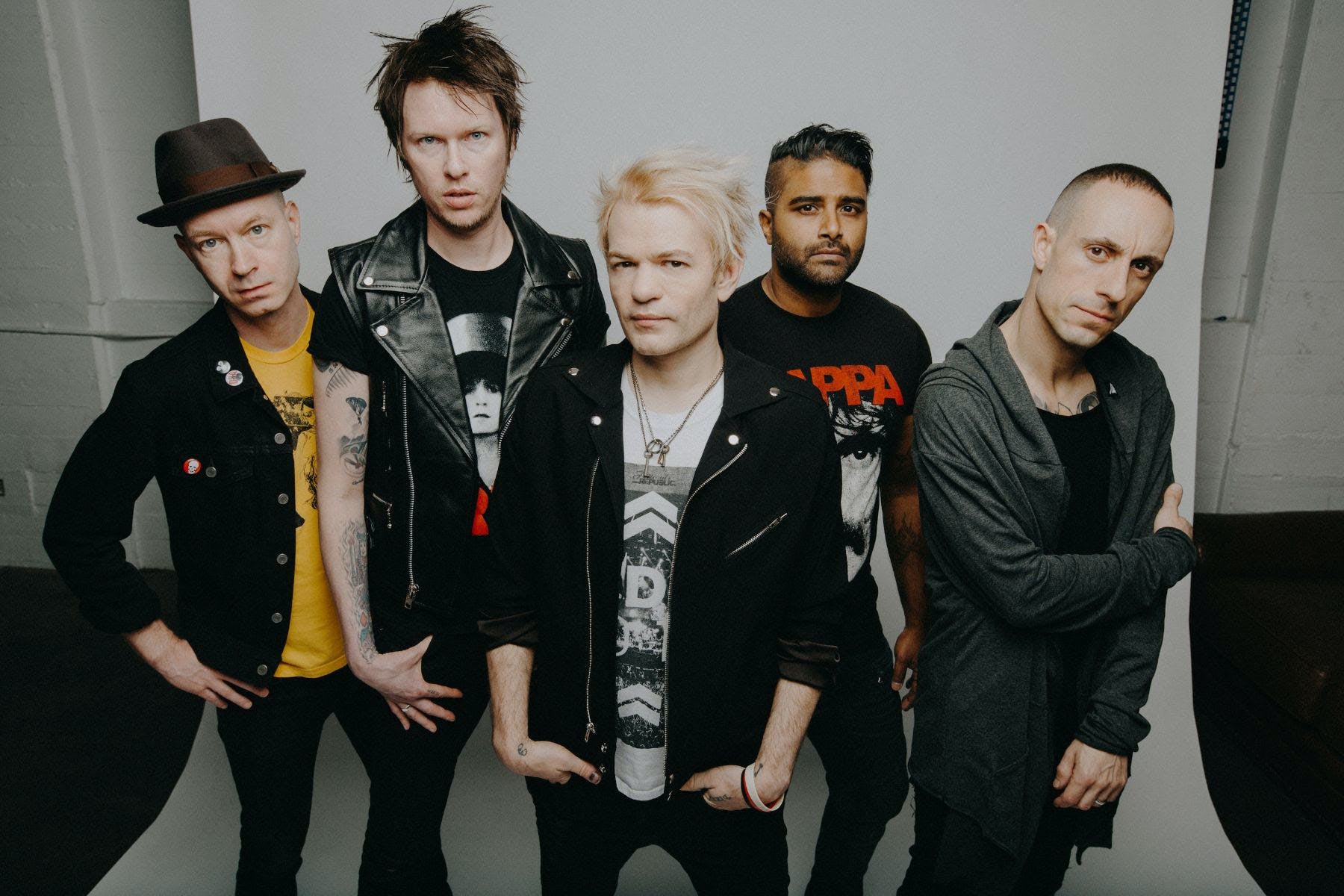 Pop-punk fans rejoice! Sum 41 are back with album number seven, the ominously-titled Order In Decline, which was announced last month alongside the release of storming single Out For Blood. The new record, due out in the summer, marks the quintet’s first material since 2016’s 13 Voices, and the second album since original guitarist Dave ‘Brownsound’ Baksh returned following a nine-year absence from the band. Throughout their career, Sum 41 have spanned all facets of pop-punk, from radio-ready hits like early-’00s classic In Too Deep to the sharper-edged darkness of 2011 album Screaming Bloody Murder. As frontman Deryck Whibley excitedly reveals to Kerrang!, Order In Decline is closer to the latter, finding the band embracing their love of heavy music – a move inspired by the energy the five-piece felt from fans on their last batch of touring. But despite what you might hear in the lyrics, call this a political album at your peril: Sum 41 might be taking Donald Trump to task with their new music, but their seventh LP isn’t solely a protest record. In Deryck’s eyes, it could just be their most personal album yet…

Hey Deryck! Did you have a specific vision in mind when you began work on Order In Decline?
“No, not at all – I jumped into this record without thinking about it. We got home from touring 13 Voices, and I started writing the next day. I’d been working on a load of ideas while we were on tour, so I had two years of that backed up on my phone. The day I got back, I picked up a guitar and started working through these ideas, and the songs started to come together pretty quickly. Three weeks later, the music for the album was pretty much written. It was all inspired by being on the road; I got back and was just really excited to work on new music.”

You’ve stated that this is your heaviest record yet. Why did you decide to go down that route?
“There was no conscious decision, that’s just what came out. I always follow my instincts when writing – I never set out do anything specific before I pick up a guitar to write. I think it was just the energy I’d felt from our crowds at the time that inspired me to want to make some heavy music; I felt so energised when the 13 Voices tour ended – I wasn’t burned out or dying to get home, you know? I was thinking to myself, ‘Man, I really wanna get back out there and play new music.’ The ideas just flowed from there.”

Are there any lighter moments to balance out the heaviness?
“Yeah, we’ve always had that aspect to us. There are two slower songs. I don’t know if I’d call them ballads per se, but there’s definitely material that’s on the softer side. One of those songs, Never There, very nearly didn’t make the record. It’s a heavy song, but in a different kind of way; it’s a stripped-down track performed on a piano and an acoustic guitar. Initially I thought it was a cool track but one I’d save for something else, rather than this album. But then other people heard it and were like, ‘It has to go on there.’”

And how does Order In Decline compare to 13 Voices?
“13 Voices was a good first record for the band we are now, which is a five-piece. We had a new drummer [Frank Zummo], Dave had just come back into the fold for the first time in almost 10 years, and in general it just felt like a new band. With Order In Decline, we understand each other better and know what we can accomplish together musically, whereas with 13 Voices we were essentially just starting out – it was almost like a rehearsal. I wrote all of these new songs with each member in mind, thinking about how I could play to their strengths, and none of our previous records have really been written that way. It’s like a TV show: in its first season the characters are just discovering themselves, but by season two the writers are writing specifically for those characters because they know what those characters have become.”

So do you feel really settled with this current line-up?
“‘Settled’ is a weird word for me because I never really feel settled; I always feel like, ‘Okay, things are great, but how do we improve?’ We’re in a good place right now, and I’d love to see how we can build on that in the future.”

Where was your head at when you started writing lyrics for Order In Decline?
“Lyrically, this is a weird record for me. I never know in advance what I’m going to write about – it’s a case of getting those first couple of lines out, and then I get the gist of where I’m going with it. I have a very stream-of-consciousness way of doing things. With this album, though, I didn’t want to go down the path that my subconscious was leading me, and I tried to fight it. I was reluctant to make a sociopolitical album, but it’s really hard to ignore everything that’s going on in the world – you can’t not have an opinion on things. I was trying to stop myself from writing anything that sounded politically ‘of the times’, but every time I tried to change the lyrics it all stopped making sense. Once I let that wall down, everything flowed a lot more easily. I feel like Order In Decline is a very personal record that talks about how I feel about different things I see happening.”

Why were you so reluctant to write about politics?
“I was paying attention to the news, but I felt like I wanted an escape from that with my music. I had a desire to get away from the real world. With everything that’s going in American politics right now with Donald Trump, I’d be waking up in the morning, turning on the news, hearing about the latest political chaos, and I’d think, ‘Fuck this guy, I can’t listen to this shit – I’m gonna go work on music.’ But then I’d start writing, the words would come out and I’d be like, ‘Goddammit – now this asshole is taking over my music!’ So I tried to fight it. The record isn’t all about Donald Trump by any means, but he has a hand in so much stuff that’s going on right now; there’s a lot of hatred and division around the world, and I didn’t want all that to come into the music. It was rearing its head in the lyrics very naturally, though, so eventually I just stopped pushing against it.”

Does that make Order In Decline a political album, then?
“No, I see it as a very personal record. I don’t get into specific policies or offer detailed opinions – this isn’t a Rage Against The Machine album. It’s my feelings about things put to music, that’s it.”

What does the title of the record mean to you?
“Over the past couple of years, it’s seemed like all order has collapsed, not just in the U.S., but everywhere. You could pick any country and apply the phrase ‘order in decline’ to it. When we were touring, we felt like a lot of places we visited were being turned upside down in a similar way to how I feel America is at the moment. I didn’t want to write about it – I wanted nothing to do with it – but it took over the music.”

Why did you choose Out For Blood to be the first single?
“Right now, we’re just trying to live our best lives, and I feel this song really represents that. When it comes to picking singles, we go with the consensus in the band; everyone offers an opinion, and when the same song starts to crop up multiple times, that’s the one we release. Out For Blood echoes the vibe of the record as a whole because it’s got so many parts. Plus, the majority of the album is heavy and aggressive, just like that song. There’s another track on the record I really like called A Death In The Family, and that’s got a similar vibe to Out For Blood. Overall, this is a heavy album.”

You produced and mixed this album yourself – why did you decide to do things without a producer?
“Like everything with our band, it happened by accident! I didn’t set out to do it; I’ve been producing records for a while, but when it comes to Sum 41 I’m usually the first to say, ‘Let’s get someone in.’ Once we started pre-production and making demos by ourselves, it got to the point where we weren’t really sure what a producer could add. Originally, I’d just made some rough mixes to pass on, but once I played them to people, everyone was like, ‘This sounds finished, you don’t need to involve anyone else.’ It was never the plan to do it that way.”

You’re working with Hopeless Records again on this record – how’s that partnership been?
“They’re great. We’ve been really fortunate when it comes to labels. In our early days, we were working with a major label, and they were really supportive and allowed us to do what we wanted, but after a while the people changed and it wasn’t such a great place, so we left. Now with Hopeless, it’s got the vibe our old label had when we first started with them. They’ve got a great vision for the band, they let us pursue things in our own way and, most importantly, everyone involved is on the same page.”

Looking to the future, you’ve got a U.S. tour in May and then you’re into festival season – will you be debuting new music at those shows?
“Definitely. We’ll certainly be playing Out For Blood, and possibly one or two others as well. We’ve just started rehearsals for the tour, so we’re figuring all that out now and deciding which of the new songs we’re itching to play live the most.”

Finally, what’s the atmosphere like in the Sum 41 camp at the moment?
“Honestly, it’s better than it’s ever been. We’ve always enjoyed being in this band, but after doing it for such a long time, you start to have those moments where you realise how hard it is to keep this thing going. But with that being said, the longer Sum 41’s career becomes, the more I appreciate just how special what we have with this band really is.”