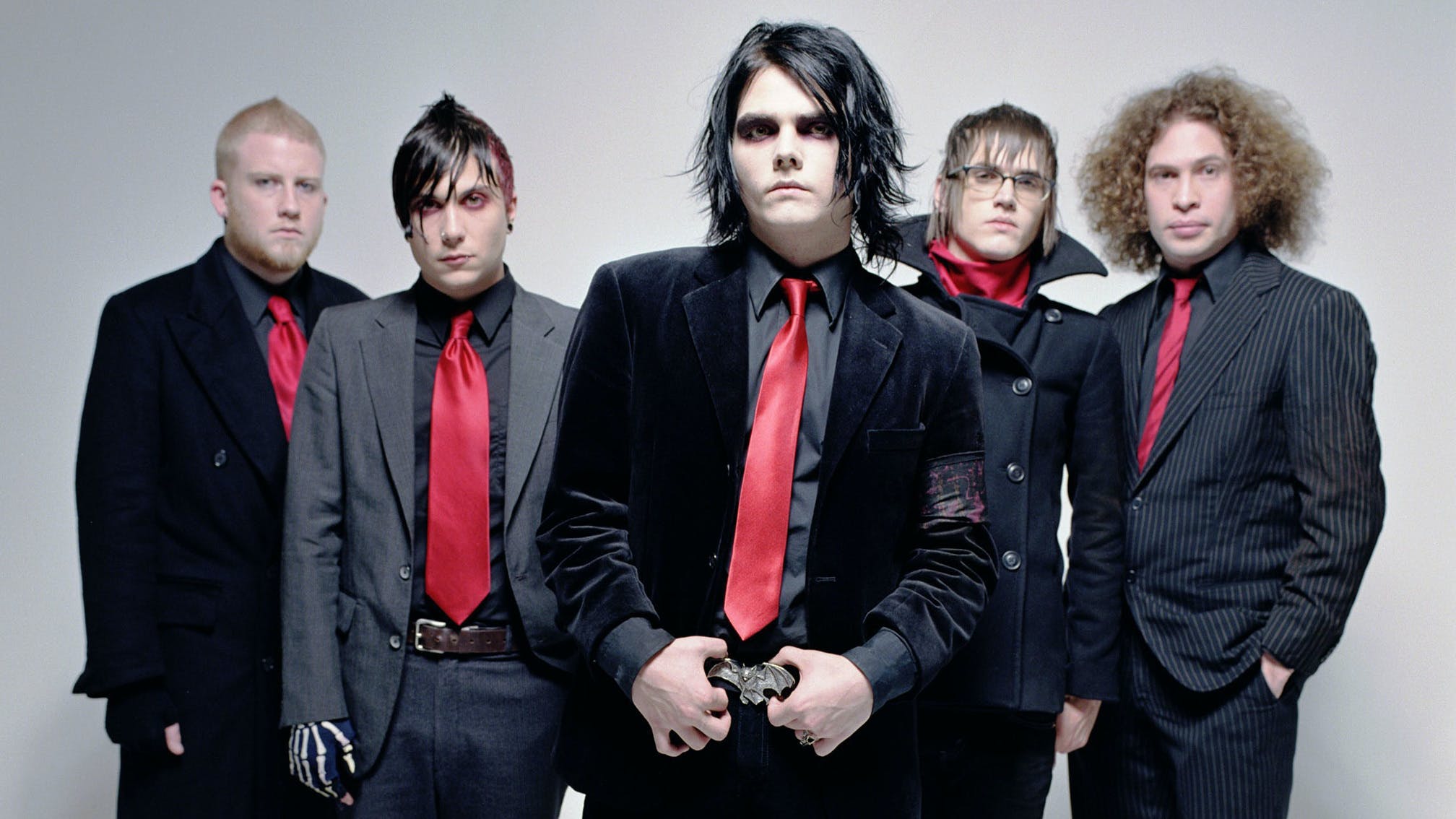 A phenomenon like My Chemical Romance only comes along once in a generation. It’s no exaggeration to say that their songs changed lives and continue to resonate with a power that’s sewn them into our collective cultural fabric. Even if you don’t like the band you’ll know the one about not being okay, the one about carrying on, and the one that goes ‘na-na-na-na-na-na-na-na-na-na-na’. That’s just what happens when artists get so big their ubiquity turns the music into a shared lived experience.

But we’re not here for that. We’re here digging for jewels buried deep in the darker recesses of their catalogue. We’re here to shine a light on those songs that even fans of the band might not know so well. If you are a fan, hopefully you’ll discover at least one ‘new’ favourite among them. Beyond these, there are apparently countless lost MCR songs out there still. Existing largely as just titles with lots of associated rumour and speculation, one day we might come to know more about the mythical Nine Volt Heart, First Chance or the scrapped songs of The Paper Kingdom project.

Until then, here are 10 dusty gems from the My Chem vaults you can listen to, each one of which we reckon is worth a little more of everyone’s time and love.

Okay, look, we promise that all these songs are special, but we can’t say the same about some of the recording quality. In the case of the much-fabled Sister To Sleep, unfortunately there is no official studio version available. Official being the operative word, because in 2013, ex-drummer Matt Pelissier leaked three 15-second clips on social media before deleting them to avoid the inevitable legal smackdown that would have followed. But even in the sweaty garage vibes of this early ’00s live performance, there is a fiendish force of will at play, hinting at the snap and snarl that would make the band superstars in the ensuing years. Until some kind soul at a record label packages the demo up as a bonus for an anniversary reissue or retrospective, this scrappy early days live taster will have to suffice.

Including a cover on a list like this might seem like cheating, especially for a band who were never shy of lending their hand to songs by everyone from Blur and Pulp to Misfits and Mariah Carey over the years, but this one feels like a worthy exception. Especially as this cover of Morrissey’s Jack The Ripper first surfaced on the band’s debut EP in 2002, Like Phantoms Forever, then again as a flip side offering on the Thank You For The Venom single. It’s way different from the haunting melancholy of the original (and the more faithful take AFI also did of the song), favouring the kind of piss and vinegar the band’s Bullets… era was fuelled by. So much so that if you weren’t aware of the original, you’d be forgiven for thinking of this as just another MCR track that ended up on the cutting room floor.

Bury Me In Black

Due to the cost of buying cheap imports vs. domestic releases in Japan, virtually all albums include a bonus track or two for the East Asian market. That’s where the demo version of Bury Me In Black first emerged, tacked onto the end of My Chem’s 2004 mega-smash, Three Cheers For Sweet Revenge. The song was also included in the first UK release of the I’m Not Okay (I Promise) single and again in 2006 on the CD half of their Life On The Murder Scene release. It’s one of the band’s more overtly aggressive songs and as dark as almost anything they’ve ever done, falling somewhere in sound between where they were on Bullets… and where they ended up on Three Cheers…. Had it appeared on either, it may well be much more loved, and deservedly so.

Kill All Your Friends

Here’s another bonus track that also made it to the B-side of a single release (Famous Last Words), yet remains something of a hidden gem in the wider MCR catalogue. Capturing the band nailing that sweet spot between morbid alt. tendencies (the title, pretty much every lyric) and their mastery of pop music tropes (huge hooks, even bigger chorus), it’s arguably strong enough to have been a successful single itself. Gerard Way has even gone on record during an AMA stating his regret that Kill All Your Friends didn’t make the final tracklisting for The Black Parade. But it’s testament to where My Chemical Romance were at the height of their powers that songs this good didn’t even make the cut.

My Way Home Is Through You

Speaking of which… My Way Home Is Through You is yet another of those songs considered unsuitable for The Black Parade for one reason or another. Perhaps because it sounds closer in tone and attack to what the band would do next on the Conventional Weapons recordings, rather than the bold, theatrical epics of the period that birthed it. But in that alone, it posits the idea of a musical force in perpetual forward motion, fascinatingly evolving before our eyes (well, ears) and if you look closely enough you can almost find the joins.

Someone Out There Loves You

This one was first heard as an untitled track performed live on The Black Parade Is Dead! DVD, erroneously named as Stay by fans, but later confirmed as Someone Out There Loves You by Gerard on Twitter. Written from the perspective of someone trying to talk to a person plagued by suicidal thoughts, it’s a classic example of the band’s talent for writing and performing songs that deal with the toughest of subjects, injecting real heart and humanity into them, yet never losing grip of their natural pop instincts.

Supposedly written during the Conventional Weapons sessions and scrapped along with a rumoured 11 others, this one throws back to the band’s love of Danzig-era Misfits, capturing a decidedly more raw and feral mood than the artists who strode the globe as polished rock stars in the preceding Black Parade pomp. That’s probably deliberate, and this is a glimpse into their mindset in the wake of that success, their instinctive reaction to the attention that came with it, and a reminder of who they were stripped of the conceptual brilliance, dramatic image and big ideas. Of course they would return to those very things (albeit in a totally different and contrasting way) for Danger Days… but in the hints and breadcrumbs left behind from those Conventional Weapons sessions, there is much to be learned.

So, this one is not like the others. It’s My Chem’s Christmas classic, Every Snowflake’s Different (Just Like You) which saw them dress up as jolly skiers for a special 2011 festive performance on Yo Gabba Gabba!, the hit U.S. children’s TV show. If you don’t know what that is then you could do a lot worse than going down that rabbit hole, as the show was co-created by The Aquabats vocalist Christian Jacobs and has regularly featured alt.rock luminaries such as Weezer, Rocket From The Crypt and Jimmy Eat World. This jaunty slice of fun shows MCR’s sense of humour in a way that official releases and recordings didn’t often allow. It’s also catchy as a winter cold, so be warned before hitting that play button.

Otherwise known as Fuck The Whole Wide World, this track technically comes courtesy of MCR’s Mad Gear and Missile Kid alter egos, created as the imaginary band who’d soundtrack the road trip of their other alter egos, The Fabulous Killjoys. Confused? That’s okay. Just enjoy the song and its echoes of the scratchier punk roots of the old days, at the height of an era when everything else went dayglo.

Why not have another helping from the band’s lesser-spotted, harder-edged aliases. Mastas Of Ravenkroft was one of only three songs (all wrapped up in under six minutes) on The Mad Gear And Missile Kid EP, which was only available through the limited CA 2019 boxset release of Danger Days…. Guitarist Frank Iero apparently loved these songs so much that he even wanted to make a full-length record under that name, but of course that has, as yet, not come to pass. We wouldn’t say no to more of this kind of thing, though…