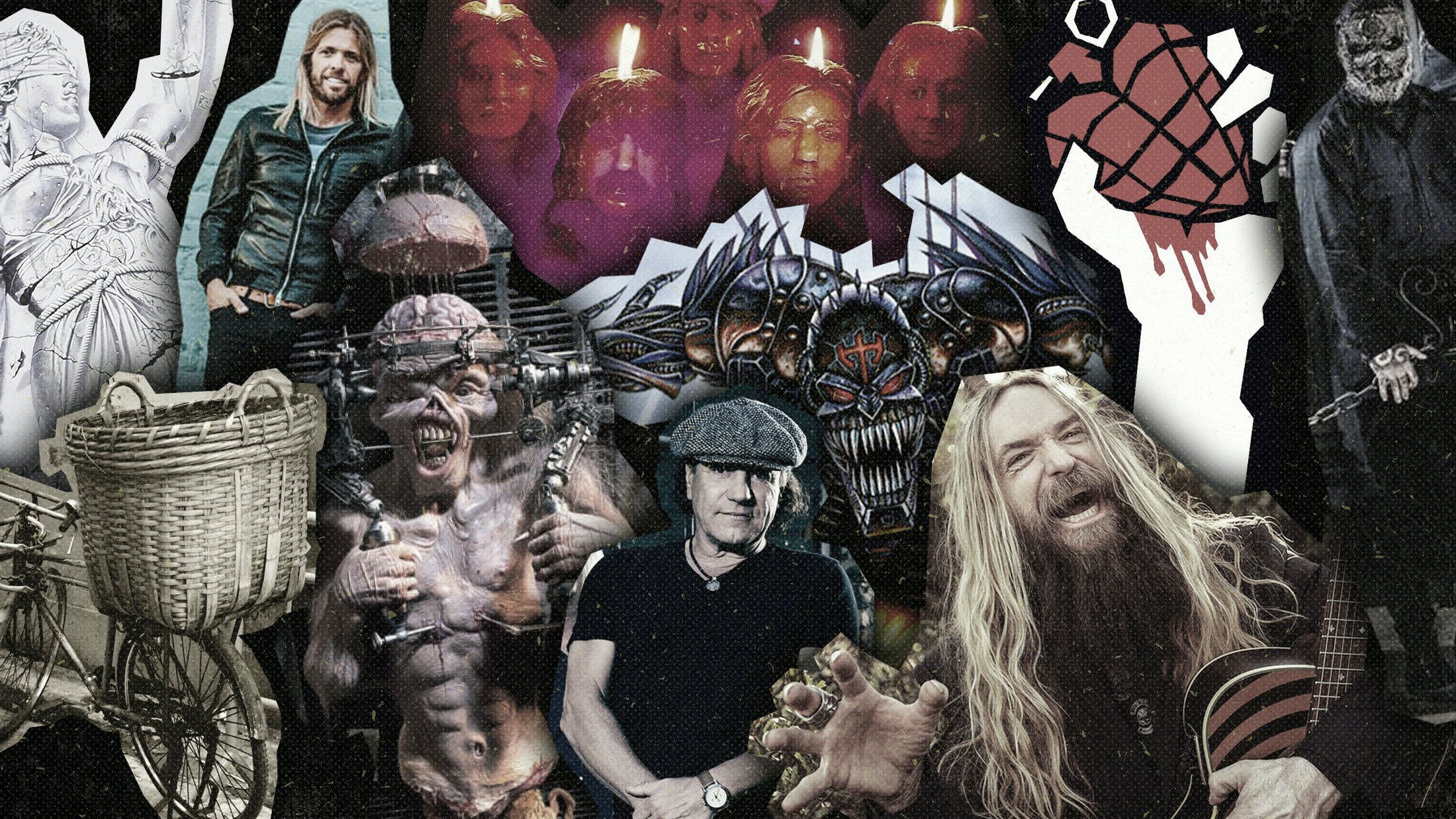 “Some are born great,” a well-known playwright once pointed out. “Some achieve greatness, and others have greatness thrust upon them when they’re plucked from day jobs, tribute acts and relatively obscure bands to tread the world’s biggest venues as instant rock stars,” he didn't quite conclude.

This is not a list of those bands who experienced overnight success together, these are the musicians who were picked to join bands that were already huge, with all the benefits – and sometimes tribulations – that entails.

This is perhaps the most fairytale rags to riches story of them all, as Tim Owens went from fronting a Judas Priest tribute act to fronting the heavy metal legends themselves. The singer had even taken his nickname from Priest song The Ripper during his time with original band Winter’s Bane, who doubled as the tribute band British Steel. "It's every kid's dream in a way," Priest guitarist Glenn Tipton told the Guardian at the time. "That idea that you can come out of nowhere and suddenly be the singer for your favourite band. It gives hope to everyone, doesn't it?" The Mark Wahlberg film Rock Star was loosely based on the story, although Judas Priest and Tim distanced themselves from it.

Zakk was playing bars and working at a gas station when he managed to get an audition tape to Sharon Osbourne via a friend of a friend. Recalling his first meeting with Ozzy he told Kerrang!, “They flew me to LA, I met up with Ozzy and crapped my pants. He said, ‘Zakk, just play with your heart. Then go and make me a ham sandwich, go light on the mustard. And for god’s sake, change your pants.’ That was pretty much it and after that I was in.” His first gig with Ozz was a special event at Wormwood Scrubs prison. “I was just hoping we'd get back out alive,” he told us. “I had the hair and the clothes – I was the closest some of those guys in there were ever going to get to Pamela Anderson." Not too long after the guitarist was playing at the Moscow Peace Festival in front of 100,000 people.

AC/DC were an internationally successful band on the verge of megastardom when vocalist Bon Scott passed away, following a reported binge in London. When they decided to carry on, the rest of the band recalled a frontman Bon himself had raved about after catching Brian Johnson’s moderately successful band Geordie. Remembering that night, Brian told the New York Post in 2011, “I had a terrible case of appendicitis, and I went down on my side, kicking and going, ‘Ooh!’ But I kept on singing. Apparently, [Bon later] told the boys, ‘I saw this guy Brian Johnson sing, and he was great. He was on the floor, kicking and screaming – what an act!’ Of course, it wasn’t an act. I was really ill.” The singer’s audition with AC/DC went great and the new-look band went on to make one of the most successful albums of all time in 1980’s Back In Black.

Who’s the longest-serving guitarist in Guns N’ Roses? Clue: it’s not the fella with the perma-shades and top hat. Slash might be the band’s six-string icon, but Richard Fortus has been a fully paid-up member of the Guns gang since 2002, having previously played in his own band Pale Divine and a bit-part role in British new wave act the Psychedelic Furs. He was one of a number of guitarists to appear on Chinese Democracy (alongside Buckethead, Robin Finck, Paul Tobias and Ron ‘Bumblefoot’ Thal), but survived the subsequent cull to tour with the classic line-up reunion.

David Coverdale was an unknown 22-year-old working in a clothes shop and living in Saltburn-by-the-sea until he was chosen to replace Ian Gillan in Deep Purple in 1973. Just months later, the singer – who would also go on to further global acclaim with Whitesnake – found himself playing to 250,000 people at the California Jam festival. “I think I came out with a nice broad Yorkshire, ‘Oh me mother!’” he told the Guardian decades later. “It was breathtaking. A lot of people don’t know, but I had a cheque for a million dollars in my arse pocket during that show – an advance from Warner Brothers, and the stage was regarded as the safest place for it that day.”

Before he joined the Foo Fighters, Taylor already had a massive gig as drummer for Alanis Morissette. Jagged Little Pill was one of the biggest albums of the ’90s and, while he didn’t play on it, the drummer was part of the touring crew when it blew up. It was still essentially a session gig, though, and Taylor was keen to get on board the Foos’ swiftly rising star. He told Kerrang!: “I heard William [Goldsmith] had departed and they were looking for a new drummer. I scrambled to get Dave’s number and called him. I said, ‘I heard you guys are looking for a drummer,’ and he said, ‘Well, do you know any?’” He’s since become one of the world's most recognisable drummers, playing an integral part in one of the biggest bands ever.

Wolfsbane were a great little band, but they were hardly global megastars. Whereas Iron Maiden – even during their relative slump in the 1990s – remained a massive draw. Blaze Bayley told Rockfiend Publications Scotland that Maiden had gone through around 1,500 demos in their search for a successor to Bruce Dickinson, before inviting 12 ‘disciples’ to a live audition. “And I was very, very surprised that they chose me to be the singer, because my voice is so different to Bruce,” he said. “We did look a little bit alike, but our voices were radically different. But I think what it was they wanted a change, and the albums that I did, [1995's] The X Factor and [1998's] Virtual XI, that was the real start of the progressive era of Iron Maiden, and I learned so much about songwriting and about my voice.”

Jason White’s status has fluctuated and he’s never been one of the core members, but for a while there the guitarist looked like he was a permanent fixture in the world's biggest punk band. A longtime friend and former bandmate of Billie Joe Armstrong, he started helping to beef up their live sound as far back as the tour for 2000’s Warning. He also contributed to the American Idiot album and was considered a full-time member for the ¡Uno!, ¡Dos! and ¡Tré! trilogy (he didn’t get his own ¡Quatro! LP – but was included in a band shot on the cover of the making-of documentary of the same name).

In 1986 Metallica weren’t quite as humungous as they would become with the Black Album, but put yourself in Jason Newsted’s grubby white hi-tops; Flotsam And Jetsam were a well-respected thrash band but Metallica were the absolute pinnacle of the scene. “I was so happy about being alive, living in an absolute dream world,” he told us in 2013. “I'd joined my favourite band and anything that happened was fine with me. Bulletproof; no sleep, no need for sleep and just fucking levitating the whole time.” The bassist really did become an overnight rock star and, while remaining a grounded and thoroughly nice chap. Recalling …And Justice For All – his first album with the band – he added, “It changed everything. It pretty much bought my first house, bought my mom's first house, it sent me into a whole new tax bracket.”

In 2014 Alessandro Venturella was lead guitarist with the very much underground UK supergroup Krokodil, featuring members of SikTh and Gallows. He was also acting as guitar tech for Brett Hinds of Mastodon, among others. By the end of that year he was being outed as the late Paul Gray’s replacement in the video for Slipknot’s The Devil In I on the strength of his hand tattoo. He wasn’t a full band member at that point, but has since been confirmed as such. “Me and Jim [Root] became friends while I was teching,” he told Bass Guitar. “He was asking if I knew any bass players. When I found out what for, I put my hand up right away. He pointed out, ‘But you don’t play bass?’ and I said something to the effect that I could do whatever he needed from me. Then I just had to make sure it was true!”