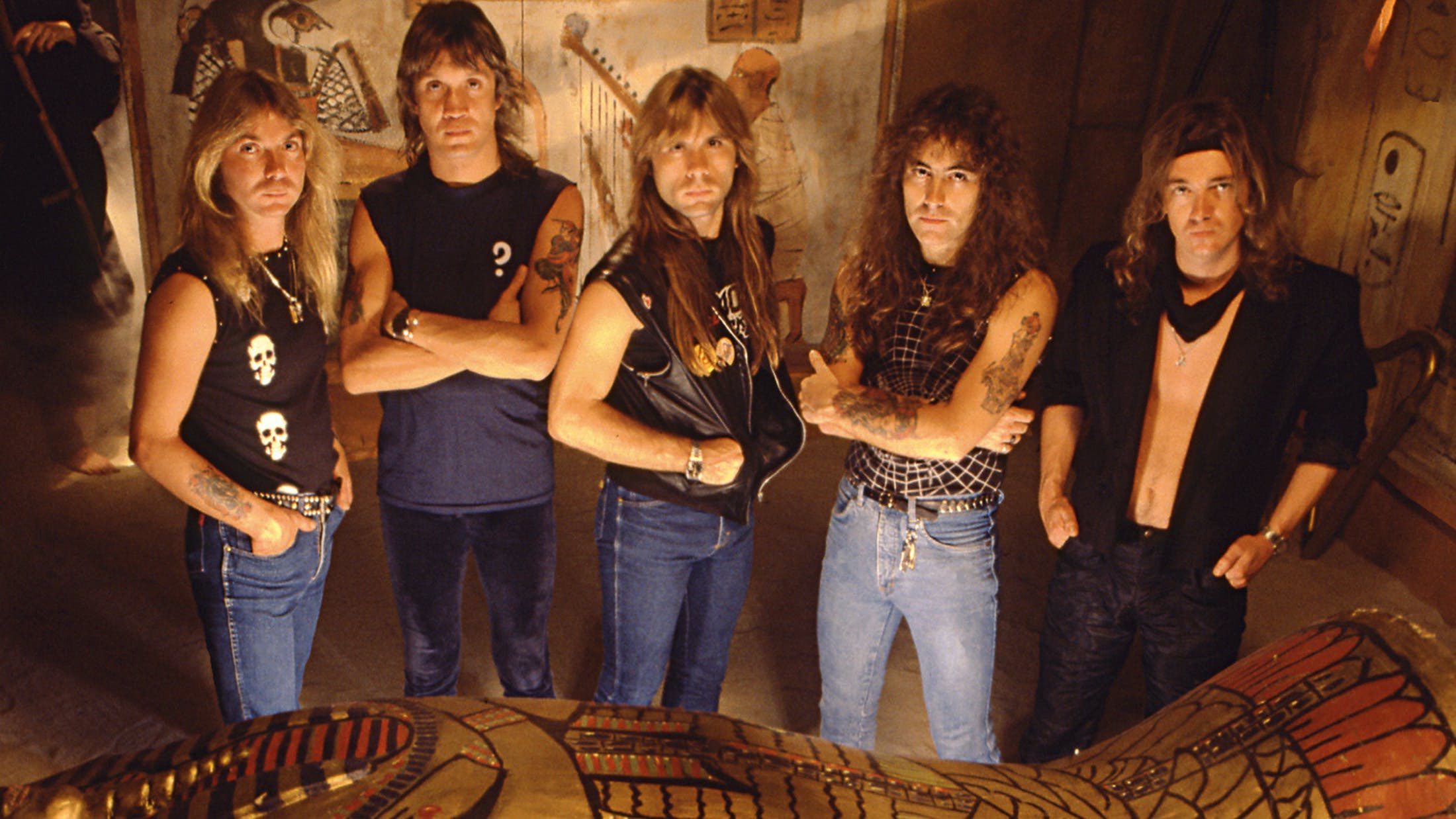 This past weekend, Iron Maiden claimed Twitter in the name of heavy metal as the 666th instalment of #TimsTwitterListeningParty with their album Powerslave. The idea is simple: fans (and those who are just curious) all press play on the record at the same time, while the band tweet along with tidbits, stories, factoids and general behind-the-scenes gossip.

Obviously we were there, blasting our battered vinyl copy at full volume to the annoyance of our neighbours, while reading tales from Bruce Dickinson, Steve Harris and the gang. Here are just 10 of the great little nuggets from the Powerslave listening party, direct from the band…

Aces High has taken on a life of its own

As the opening track to Powerslave, Aces High has long been a part of Maiden’s live show, but with one key difference: it’s preceded by Winston Churchill’s iconic ‘We shall fight on the beaches’ speech. "Hearing it without the Churchill’s Speech intro now is a bit odd,” said Steve Harris. “People have heard it so many times live now that that’s the deal!" According to SetlistFM, Maiden have played Aces High live 487 times. That’s a lot of Churchill.

The lads enjoyed the odd tipple while writing the album

To really focus on the record, Maiden jetted off to sunny Jersey for Powerslave’s writing sessions in early 1984, locking themselves away in the Le Chalet Hotel. As you might expect, hotels on the island weren’t exactly busy at that time of year, leaving the building – and the bar – entirely to the band.

“We wrote this on Jersey, where we were holed up in January and February, freezing cold, Atlantic gales lashing the whole place,” remembered Bruce. “We were in a hotel, 'locked down' ourselves pretty much, except the bar was open and it was free which was worrying…”

“We were supposed to be there writing. I say 'supposed to', because mainly the first week or so we ended up getting pissed!” added Steve. “We had the whole hotel to ourselves and it had a 24 hour bar. You’ve got to get into the vibe of things I suppose.”

Maiden had started work on their iconic 2 Minutes To Midnight while in Jersey, but Bruce only finished the lyrics when they were in Nassau to record the album. “I remember AC/DC arriving at the studio just as we were leaving,” remembered Adrian Smith. “Bruce collared Brian Johnson and we played him a rough mix .” We’re not sure what Acca Dacca were doing in Nassau in ’84, but they did record Back In Black at the same studio some four years earlier.

Bruce has a dangerous connection to The Duellists

Inspired by the 1977 Ridley Scott film of the same name, the vocalist has a deep-rooted connected to the man behind the movie’s sabre-based combat. “The guy who choreographed the fights in the film The Duellists was Bill Hobbs,” said Bruce. “He founded a fencing club called the Swash and Buckle where I fenced. A lovely guy who wrote a definitive book on stage fighting. He made The Duellists savage and brutal.”

On the sleevenotes for Powerslave, longtime Maiden producer Martin Birch is credited with the nickname Pool Bully. Not a particularly fond moniker, or a very metal one, but it is justly deserved. Steve remembers that there were few days off for the producer during Powerslave, but he was “such a character” when he was able to let his hair down. “When he did get a day off, if we were out by the pool or whatever, he’d just walk past and push everyone in,” said Steve. “So that’s where the ‘Pool Bully’ nickname in the credits came from.” Now you know.

The term ‘Powerslave’ took on a different meaning on tour

Not just an evocative album title, the word Powerslave began to mean something different on the band’s subsequent World Slavery Tour (a year-long trek of almost 190 shows). “There was an ironic message to Powerslave,” said Bruce. “When you had amplifiers powering a big PA system, you had ones just generating power and nothing else and they were called slave amplifiers because they were just slaves to the big amplifier… Powerslaves!”

He continued: “The irony was not lost on me because we’d been going through this crazy touring schedule and I thought that maybe we were that too as musicians… Maybe we were slaves to the power of death!”

They all still love the album sleeve

Derek Riggs is synonymous with Iron Maiden’s visual aesthetic, designing the majority of their record sleeves as well as creating their infamous Eddie mascot. But amongst all his illustrative work, Powerslave’s Egyptian design is still one of the band’s most iconic and striking covers.

“One of my favourite album covers, possibly of all time, but certainly of Maiden,” said Bruce. “I just think it’s a classic, and it has inspired so many of our stage performances as well. It’s just like ancient Egypt itself: it’s eternal and eternally interesting!”

“The artwork has definitely stood the test of time without a doubt,” added Steve. “But it's such massive subject matter – Derek had to do it well, because if he didn’t it ends up being cheesy. It could be a fine line perhaps, but I think the artwork's fantastic.”

Bruce is a dab hand at pinball

Pro-tip: If you see Bruce Dickinson near a pinball machine, don’t accept the challenge to beat his score, because you won’t. Speaking about the ‘Mariner Multiball’ – “where you shoot into the Pharaoh’s tomb and then shoot the albatross”, naturally – Bruce revealed that he has a high score of 368 million! Not too shabby.

A piece of Maiden history is hanging out in Florida

If you’ve ever seen Maiden live, you’ll know just how intricate and elaborate their stage shows are – from giant animatronic Eddies to spitfires soaring overhead. But where do the props go afterwards? Well, if you visit drummer Nicko McBrain’s restaurant in Florida, you can check out one of the original Eddie sarcophagi! The other one isn’t available to the public, though, as it is in Steve’s kitchen…

Bruce has his own Powerslave mask

And he looks pretty awesome in it.