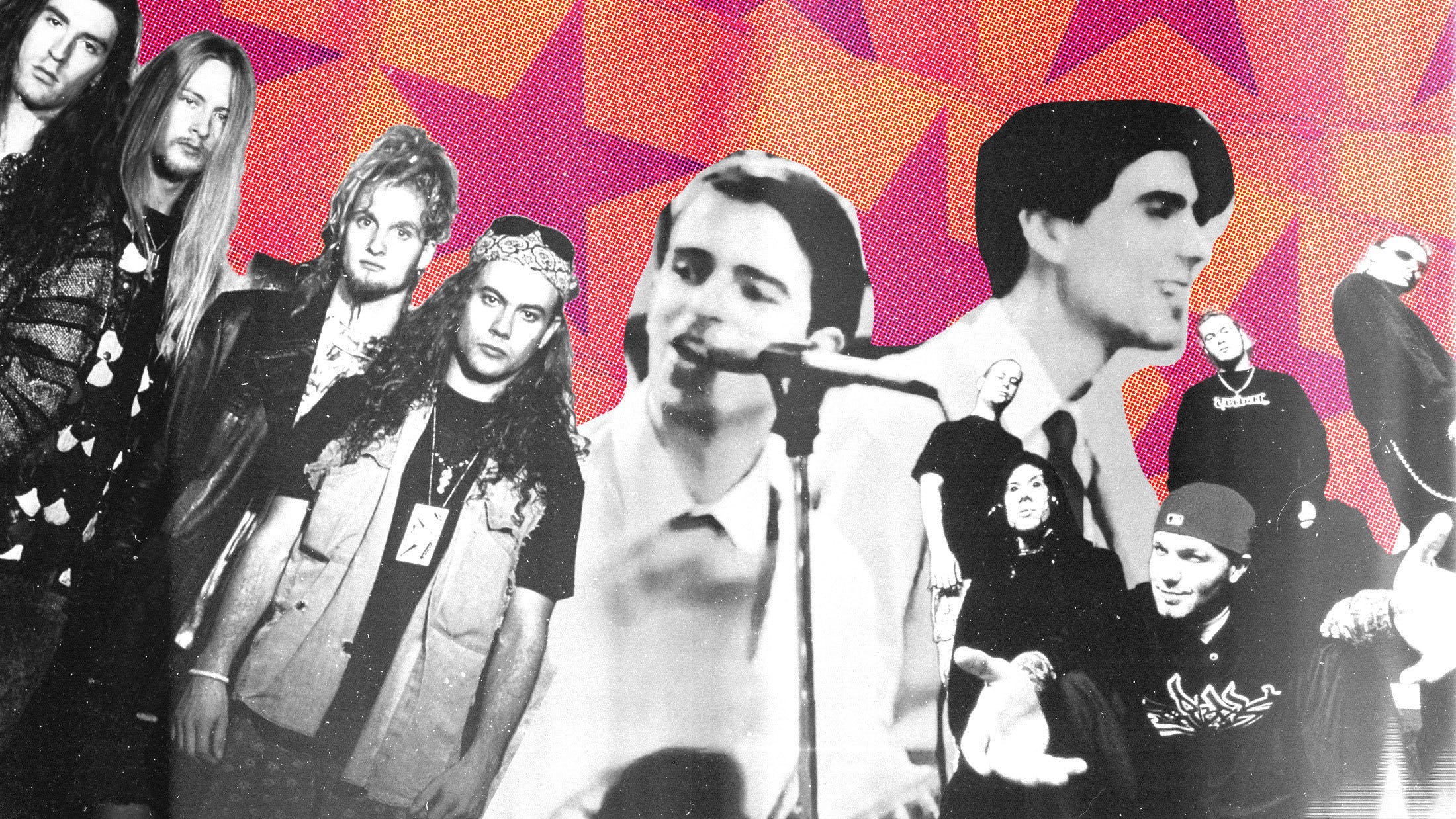 There are a lot of reasons to write a song about someone. You might find them really attractive, look up to them, miss them or hate them. You might want to relive something that happened, lament something that never got to happen, or simply celebrate that you think someone rules. Or sucks!

Weezer – In The Garage (written about KISS)

Rivers Cuomo’s heartfelt tribute to spending time nerding out on one’s own, playing Dungeons & Dragons, reading comic books and writing songs. The titular garage features 'Posters on the wall / my favourite rock group KISS / I got Ace Frehley, I got Peter Criss, waiting there for me.' Weezer drummer Patrick Wilson once said, “Rivers worshipped KISS growing up. [...] Rivers met Gene Simmons once; Gene took him aside and apparently said, ‘Listen – fuck your fans.’ It was his way of advising us to forge our own path.”

Alice In Chains – Would? (written about Andrew Wood)

The frontman of grunge pioneers Mother Love Bone never saw their debut album released – he died in 1990 aged just 24 after a heroin overdose. His friends and fellow Seattle grungers Alice In Chains dedicated their debut album Facelift to his memory, with this song in particular a sympathetic look at struggles with addiction. Jerry Cantrell later wrote of his friendship with Andrew Wood: “There was never really a serious moment or conversation, it was all fun. Andy was a hilarious guy, full of life and it was really sad to lose him. But I always hate people who judge the decisions others make. So [Would?] was also directed towards people who pass judgements.”

Dave Grohl spent years denying I’ll Stick Around was a swipe at Courtney Love, while really emphasising it wasn't about Kurt Cobain (“It would fucking break my heart to think that people are under that impression,” he told Rolling Stone). It’s a pretty brutal track, with lyrics like 'How could it be I'm the only one who sees your rehearsed insanity?' and of course the yelled chorus of 'I don’t owe you anything.' The frontman is now quite open about the subject of the song, telling his biographer Paul Brannigan: “I don’t think it’s any secret that I’ll Stick Around is about Courtney. I’ve denied it for 15 years, but I’m finally coming out and saying it. Just read the fucking words!"

Trent Reznor and Marilyn Manson had a pretty big falling out towards the end of making Antichrist Superstar, which Trent produced. Starfuckers Inc. was a direct result of the rift, which lasted a few years; a slamming indictment of fame-chasing and the desire for celebrity that Manson says is specifically about him. However, they made up – Mazza ended up not only co-directing the video, but makes a cameo appearance at the end. They’ve fallen out and made up a few times since – in 2009, for instance, Trent branded Manson “a dopey clown”.

While Limp Bizkit frontman Fred Durst was a Nine Inch Nails fan, it didn’t go both ways. Trent Reznor referred to him as “a moron” in an interview, inviting Limp Bizkit to, er, surf a piece of plywood up his ass. Fred subsequently tore into him on Hot Dog using the tune from Closer, which led to the odd situation of Trent receiving a writing credit on a song that openly attacks him. He told Kerrang!: “Fred lifted choruses off three or four songs of mine then when his record was going to print, realised, ‘Fuck, I’d better ask permission first or I might get sued!’ I let him do it – I wasn’t gonna hold his record up.”

After three albums with Dinosaur Jr, bassist Lou Barlow was fired by frontman J Mascis, with whom there had been a lot of tension for a while. Lou's side-project, Sebadoh, became his primary outlet, and their next album featured The Freed Pig – a savage attack on J: 'Now you will be free / With no sick people tugging on your sleeve / Your big head has that more room to grow / A glory I will never know.' The two have since made up, professionally at least, touring and performing together. Lou said in 2005: “There was never any point where I said anything bad about Dinosaur’s music, which was always great, and continues to be great. I mean, I made a huge stink about things, and complained about J, but that was all personal."

Sevendust's Morgan Rose wrote Enemy about a former bandmate of his wife, Rayna Foss-Rose – Coal Chamber’s Dez Fafara. “That song is about the person in the world that I hate more than Saddam Hussein," he told MTV. "It was good to be able to get that stuff off my chest because I was able to express myself without doing anything stupid that would get me in trouble." The track was originally titled Pez – like the sweets that come out of those plastic dispensers – because, Morgan claimed, “'I want to take this dude's head and pull it back and rip his tongue out of his neck.”

Before Jawbreaker signed to a major label, they spent a lot of their career slagging off major labels. This meant their signing (and subsequent cleaned-up sound) alienated a lot of their fans, and while they were on course to become absolutely massive, everything went a bit misaligned and it never happened. Their one album on a major, 1995’s Dear You, features a final track inspired by another Californian frontman accused of selling out, Green Day’s Billie Joe Armstrong. Billie supposedly announced “I’m fucking crazy!”, leading Jawbreaker’s Blake Schwarzenbach to pen this tune, featuring the line, 'Now everyone tells me they’re crazy / Crazy people aren’t so fucking boring.'

Against Me! – Bob Dylan Dream (written about Bob Dylan)

Bob Dylan is among the many artists that Laura Jane Grace’s songwriting has been compared to, being a big influence on her along with The Clash and The Birthday Party. Her tribute to Bob is cheerfully odd, wishing to 'Go thrift store shopping for vintage electronics / Race remote control cars in toy departments / We'd never talk about playing music.' Laura's music has evolved through her career just as the legendary songwriter’s did, with her telling Vulture, “I’m a lifelong Bob Dylan fan and I really respect artists who are true to themselves in that way, even if their core fanbase or whatever end up hating what they’re doing and are angry even for changing in ways they’ve changed. But it keeps it relevant to them and it keeps them engaged and it’s real then, it’s not like a jukebox thing.” Laura's daughter is less of a fan.

Motörhead – R.A.M.O.N.E.S. (written about The Ramones)

Motörhead were pals with The Ramones and wrote this song in tribute to them, name-checking members both past and (at the time) present, and referencing a few of their songs. The Ramones themselves later covered it, and Joey Ramone said, "It was the ultimate honour – like John Lennon writing a song for you." Motörhead guitarist Phil Campbell told Songfacts the song started out as a ZZ Top pastiche: “I did like, a ZZ Top thing, and then Lem says, 'Let's double-speed it up.' So we did that. And then Lem said, 'That sounds pretty good,' and then he wrote the lyrics for R.A.M.O.N.E.S. But originally, it was a ZZ Top groove, which I came up with."

While Lush’s Miki Berenyi has only ever officially confirmed the identity of one of the men described in Ladykillers – the third verse is about former Weezer bassist Matt Sharp – it’s pretty much universally taken as fact that the man with 'the muscles and the long hair' who 'talks for hours about his sensitive soul / and his favourite subject is sex' is Red Hot Chili Peppers frontman Anthony Kiedis. Lush went on Lollapalooza with the Chilis, and Miki later recalled: “I remember Anthony Kiedis inviting me to come along with the band to ‘the ballet’. I didn’t realise he meant a strip club – I genuinely thought they were off to see Swan Lake! Thankfully, I was enlightened and I declined. ‘Why the hell would I want to go to a strip club?’ I thought.”