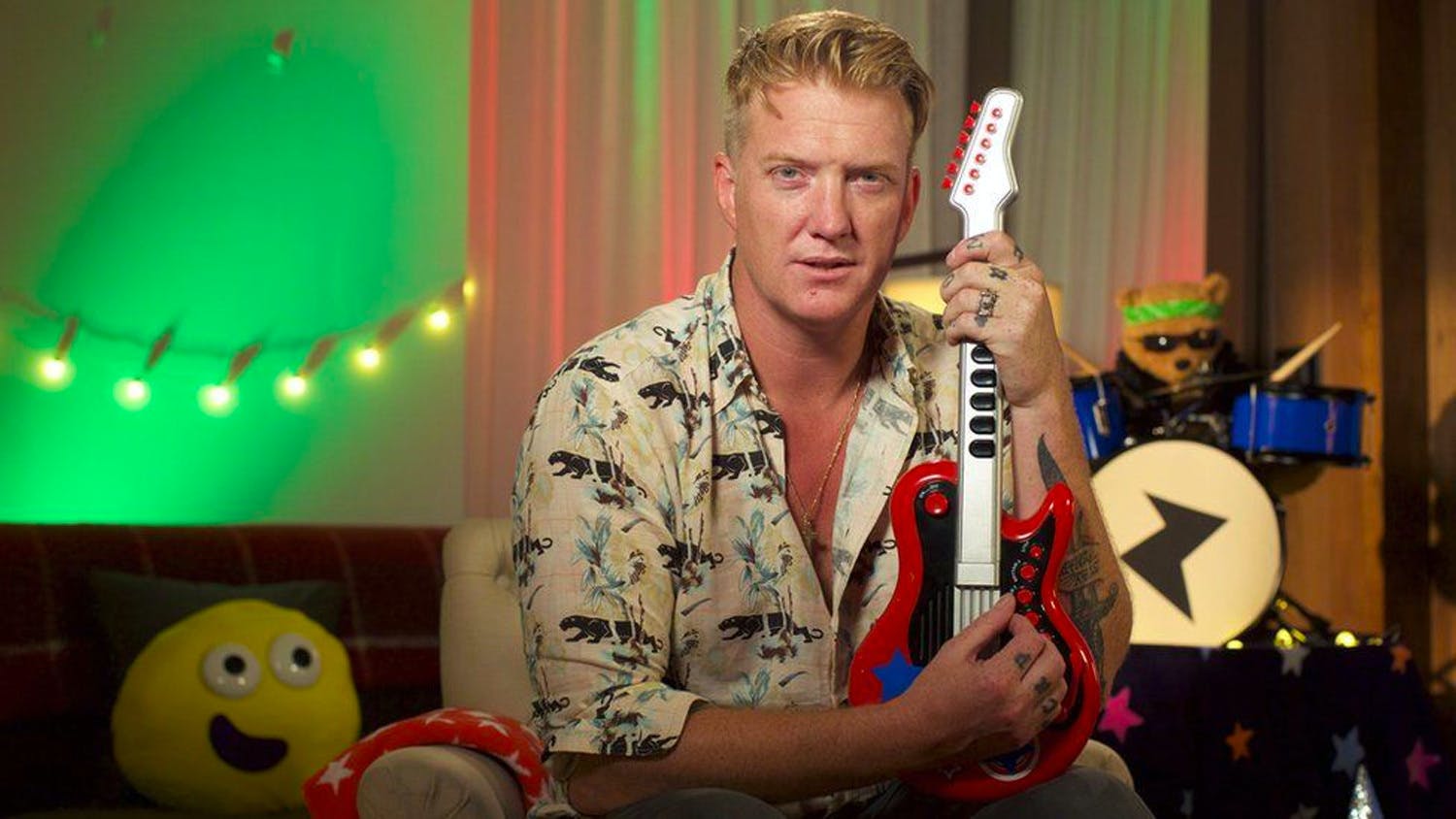 Fall Out Boy’s Pete Wentz recently realised a childhood ambition by appearing on Nickelodeon’s revamped Double Dare game show. A recent trailer showed him getting covered in gunge, dressed as a baby and generally acting the giddy goat. “I’ve always wanted to compete on Double Dare since I was a kid,” Wentz told People. “What a gem of an experience — it was more than I could have ever expected.”

And while it’s fun to see one of our own appear on mainstream TV shows, there’s something utterly jarring about a musician making an appearance on a children’s programme. It’s as though they’ve crossed into another dimension where swearing doesn’t exist and the only drinks on offer are fizzy pop, milk or water. And as for recreational drugs? You might get a sweet hit of strawberry-flavoured Calpol – if you’re lucky.

But it got us thinking. Cartoons aside, which rock stars have gatecrashed the highly-regulated, squeaky clean world of kid’s TV and moulded young minds along the way?

Every weekday at 6:50pm in the UK, CBeebies – the BBC’s pre-schoolers channel – broadcasts its popular Bedtime Stories, before shutting down for the night. Celebrities such as Tom Hardy, Simon Pegg and Dolly Parton have all stepped up to read a story and give frazzled parents a moment’s respite before the all-out war that is bath and bedtime. On October 6, 2017, the task fell at the feet of Queens Of The Stone Age frontman Josh Homme, who read Julia Donaldson’s book, Zog, about a clumsy student’s adventures in dragon school.

People of a certain age will know why the Iron Maiden drummer has had the iconic yellow hand puppet fixed to his kit during live performances for the last three decades. McBrain appeared on The Sooty Show in 1988, where he took part in a drum-off with the titular hero and his mate Sweep. Look out for the drummer’s tight snow-washed denims. It was truly a different time. The band paid tribute to the mute star last year as he celebrated his 70th birthday, tweeting, “Happy Birthday @Sootyandco – 70 years old and still touring like a little trooper!”

In February 1992, Anthrax made a guest appearance on the sixth season of US sitcom Married... With Children. In this episode, ‘My Dinner With Anthrax’, the Bundy children trick their parents in going away for their anniversary, because they’ve won a competition where the thrash lords will play an exclusive show in their home. The band trash the gaff during a performance of In My World, while vocalist Joey Belladonna smashes a bottle into his own face. “In the script for that episode, all the way up until Thursday of the week that we shot, there’s a scene where Kelly takes me by the hand up to her bedroom to have sex,” Scott Ian tells Rolling Stone. “That scene didn’t make the actual taping.” Only one person would have wanted to see that.

Birmingham grindcore pioneers Napalm Death turned up on BBC TV kid’s music show What’s That Noise? in 1989. Hosted by Red Dwarf star Craig Charles, the band – whose line-up then featured vocalist Lee Dorrian, guitarist Bill Steer, bassist Shane Embury, and drummer Mick Harris – played the one-second song You Suffer from 1987’s Scum and the title track from its follow-up From Enslavement To Obliteration. Check out the band’s interview, where drummer Harris seems very excited to be on television while Dorrian and Steer shyly discuss their unintelligible lyrics. Later that year, Steer and his Carcass bandmate Jeff Walker appeared on Red Dwarf as band called Smeg And The Heads in the episode Timeslides.

This Washington DC duo features The Warmers’ Amy Farina and her husband Fugazi’s Ian MacKaye. The duo made a video for their song Vowel Movement, which was featured on the “alt-rock guerrilla kids’ dance party” internet show Pancake Mountain in 2003. One for fans of Sesame Street and educational, cheerful post-hardcore.

Rocket From The Crypt

Despite breaking up in 2005, the San Diego six-piece reunited seven years later for a one-off appearance on Nick Jr’s retina-frying show Yo Gabba Gabba!. Frontman John ‘Speedo’ Reis was already a presenter on the show as the mysterious Swami, so it was inevitable that one of his myriad bands would make an appearance on the show. The band performed a brand new track for the occasion, He’s A Chef, with Reno 911 star Thomas Lennon starring as a chef. The track was later released as a limited edition split seven-inch, featuring Biz Markie/The Flaming Lips’ Wayne Coyne on the flipside. Since this culinary delight, the band have decided to tour and record sporadically, restoring some equilibrium to this crazy world. Yo Gabba Gabba! has also hosted performances by Jimmy Eat World, Taking Back Sunday, My Chemical Romance, Weezer, and Mariachi El Bronx. But it was Rocket From The Crypt’s reunion that delighted men and women of a certain age.

In November 1978, The Coop reared his head on episode 307 of The Muppet Show. During the show, “one of the world's most talented, but frightening, performers” – Kermit’s words – attempts to coerce the amphibian host to sell his soul to the devil and performed Welcome to My Nightmare, You and Me, and School's Out, with his band The Vile Bunch. Look out for Sam The Eagle’s confrontation with the original shock rocker, who describes him as “a demented, sick, degenerate, barbaric, naughty... freako.” The following episode returned to more wholesome territory with a special guest appearance by country star Loretta Lynn, who to our knowledge, never hanged herself on stage.

Blindfold And Led To The Woods

This technical death metal band were amazingly booked to play on the New Zealand kid’s programme The Erin Simpson Show in 2010. The Christchurch act – who were a member down after he "fell off a roof and broke both his legs” – take part in a good-natured interview with the show’s host before performing tracks in front of an audience of bewildered children.

Going back to the Muppet theme, Dave Grohl starred in the 2011 full-length reboot as Animool, Animal’s replacement drummer in the slightly intimidating tribute band The Moopets. Four years later, the Foo Fighters frontman returned to the TV series and took on Animal in an evenly-matched drum duel in the episode Going, Going, Gonzo. It’s hard to tell them apart, if we’re being completely honest.

10 years ago, Jack Black appeared on Sesame Street during its 39th season. In the show, he ruminates on the words ‘octagon’ and ‘disguise’ with excitable star Elmo. And like his one-time Tenacious D bandmate Dave Grohl, Black makes an uncredited appearance in the 2011 film The Muppets. “The Jack Black in the movie was a horrible Hollywood asshole,” says Black. “It was hard to do that. I didn’t want to be an asshole. Then I was worried because I took my boys to see the premiere. I had to warn them. It’s weird. You don’t want to take your kids to see you in a movie. It does a number on their heads be-cause then they’re all of a sudden sharing Daddy with a bunch of people in the theatre.”

This leathery vocalist is no stranger to acting, counting roles in The Color of Money, The Crow: City Of Angels, Cry-Baby, and Suck as part of his movie CV. But it’s his role as James ‘Pop’ Mecklenburg in Nickelodeon comedy The Adventures Of Pete & Pete which deserves a mention today. Pop made four appearances on the show, in the episodes Farewell My Little Viking, Halloweenie, Road Warrior, and Dance Fever, where he crooned a ballad for his daughter Nona at the school dance. And kept his top on and didn’t even hump the speakers, which must have been a first for ol' Iggy.

In December 2000, Slash was interviewed on ITV's music show CD:UK by Cat Deeley. During the short chat, the Slash’s Snakepit guitarist revealed rumours he’d heard about himself (“getting a blow job in a bar”) and showed Deeley an injury he received from his pet rhino iguana, which “bit the fuck” out of his hand. “CD:UK unreservedly apologises for any offensive comments made by Slash during this morning’s interview,” read a hastily written statement. He was dropped from the rest of the show and his interview was cut out of repeat showings. Saturday morning TV hasn’t been so fist-chewingly awkward since Five Star were asked whey they were “so fucking crap” during a call-in segment on BBC TV’s Going Live.