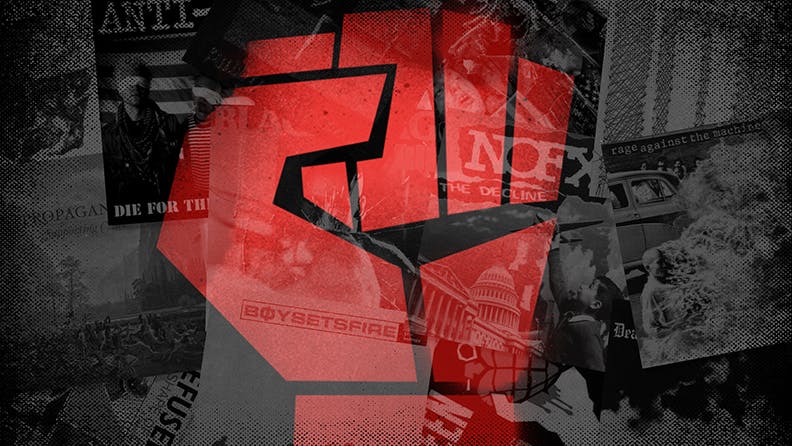 There are no prizes for pointing out that the word is in an incredibly messed up place right now – we're in the midst of a pandemic, Donald Trump is still in power, racism and homophobia are on the rise, Brexit is actually happening, and the disparity between the rich and poor is only increasing. While music has always offered some kind of escape from the horrors of reality, there are some bands whose albums exist to actually encourage – if not enforce – a change in the way things are. Here are 13 albums that do that more than most. These are rebellious records that should inspire their listeners to stand up and take part in the revolution that it feels like we need more and more with each passing day.

Two decades into their career, Pittsburgh’s Anti-Flag continue to make ferocious music that takes a stand against the corporate mechanisms of the U.S. government and the military-industrial complex that essentially rules Washington. While recent albums American Spring and American Fall are crushing indictments of the neoliberal powers that be, You’ve Gotta Die For The Government, Kill The Rich and Fuck Police Brutality are, sadly, as relevant as ever in 2020. In recent years, Anti-Flag have become more nuanced both musically and in terms of their politics, but the vitriolic rage of this record – the first and last studio full-length to feature original member Andy Flag – makes it a powerful and essential call-to-arms to change the fundamental fabric of society.

Some five years before Green Day released American Idiot, NOFX released their own musically ambitious political magnum opus, in the form of The Decline – an 18 minute 20 second track that, among other things, takes on the Christian Right, the NRA, Big Pharma, wealth inequality and the corrupt ways of American politics. Of course, that probably technically makes it an EP, but while other actual NOFX albums tackle the fucked up state of the nation – 2003’s The War On Errorism, for example, was a direct attack on George W Bush – The Decline reveals and takes issue with the rotten heart of the system, rather than whichever puppet-on-a-string currently resides inside the White House.

Who would have thought an elaborate punk rock opera ostensibly about George W Bush’s presidency could not only revive Green Day’s career, but turn them into the biggest rock band on the planet for a while? That’s exactly what happened when American Idiot was released. Rather than take aim at Bush by name, Billie Joe Armstrong transposed the turmoil of contemporary political events such as the Iraq War – which had started the year before – onto the album’s fictional landscape. Its songs detailed that dystopian environment and the characters within, revealing the devastating effects that reactive governments can and do have on their citizens.

Riot Grrl pioneers Bikini Kill only initially lasted seven years and two albums, but their impact on alternative music is immeasurable. Fronted by Kathleen Hanna – who later went on to front electro-punk outfit Le Tigre – Bikini Kill challenged the male-dominated status quo of the punk scene with both their songs and live performances, which often saw Hanna being verbally and physically assaulted by male members of the audience. Raw and aggressive in equal measure, this record might be just 24 minutes long, but songs like Rebel Girl and Alien She delivered a fierce feminist message with rambunctious energy and a ferocious snarl. It’s a kick in the balls.

Recorded live across two nights, the debut album by these Michigan hellraisers contains one of the most formidable clarion calls ever captured on record. “Right now,” announces a breathless Rob Tyner, “it’s time to kick out the jams, motherfuckers!” before the band launches into one of the most revolutionary riffs of all-time. Heavily influenced by the Black Panther Party, the band actively encouraged people to take to the streets – and their restless, angry energy was inseparable from their radical activism and their very serious desire to overthrow capitalism through forceful, violent uprising.

Black Flag went through countless line-up changes before they even managed to record this first album. Following the departure of Keith Morris and then Ron Reyes, it was their third vocalist, Henry Rollins, who was committed to tape for this uncompromising debut. The band took their name from the traditional symbol of anarchists, but that wasn’t just posturing – Black Flag were a dangerous proposition who didn’t give a flying fuck about authority and whose live gigs were frequently shut down, ending in violent clashes with riot police. That aggressive, almost nihilistic attitude is captured in these brutal songs. They not only changed the shape of punk to come but they inspire the listener to never take shit from anybody.

Naysayers will point out that Rage Against The Machine’s self-titled debut was very much a product of the machine because the band were signed to a major label. And while the rap-funk-metal hybrid of some of its songs might not have aged all that well, it’s impossible to deny the impact of the rest – Killing In The Name, Know Your Enemy and Freedom are vicious, vitriolic gut punches designed to shake you out of your slumber and see the oppressive, tyrannical system we live in for what it really is. And then burn the whole thing down.

‘Where’s your anger? Where’s your fucking rage?’ demands Boysetsfire vocalist Nathan Gray on the title and opening track of the Delaware post-hardcore band’s second album. And if you didn’t feel riled up before listening to it, it’s impossible not to afterwards – it’s one of the most visceral and violent moments ever recorded – and the album doesn’t let up one bit. It’s not all politics – a song like the phenomenal Rookie is as much about personal strife as it is a grand political statement – but these songs course through your veins with an incendiary force that’s impossible to ignore and which makes you want to act to make the world a better place.

Against Me! – Transgender Dysphoria Blues (2014)

Any of Against Me!’s albums could have made this list since the Florida punks have always sung about social injustice and ways to overthrow it. But this album – which deals with every aspect of frontwoman Laura Jane Grace’s struggles as a transgender woman – is perhaps the band’s most empowering. Because here, political ideologies are swapped for personal problems, but ones that have significant ramifications on a wider scale and which fearlessly tackle topics that had rarely been addressed in such a forthright, public way. ‘You’ve got no c**t in your strut,’ Laura Jane sings with aplomb, as she battles the homophobia and transphobia that’s still all too prevalent today. But while it’s not an easy fight, the empowerment of this album is ultimately victorious.

Refused – The Shape Of Punk To Come: A Chimerical Bombination In 12 Bursts (1998)

Playing on the title of jazz legend Ornette Coleman’s 1959 record, The Shape Of Jazz To Come, Refused’s third album was an attack on what the Swedish band saw as the stagnation of punk music after the commercial breakthrough of punk. Rightly or wrongly, their thought process was that punk couldn’t have a revolutionary edge or be anti-establishment if delivered in a format that had been co-opted by the mainstream. The result was to shake things up and make punk music dangerous again, and these songs are interspersed with unlikely musical flourishes, fake party political broadcasts and lyrical references to famous anarchists. Whether you take all that in or not, songs like The Deadly Rhythm and New Noise are urgent and insurgent slabs of noise designed to stir things up.

Canadians might have much less to complain about than their American counterparts, but that never stopped Propagandhi. From their inception in 1986, the band – propelled by hardline, leftwing ideologies – were outspoken about all manner of things, including, but not limited to, anarchism, veganism, sexism, racism, imperialism, homophobia, capitalism and religion. This album is about as exhausting as the forces it rails against, perfectly capturing the band’s righteous indignation through a flurry of impassioned, breathless songs. Cerebral and aggressive in equal measure, Supporting Caste searches tirelessly for empathy from beginning to end while simultaneously pushing back against every kind of prejudice and inequality.

Dominated by Jello Biafra’s distinctively tremulous vocals, Dead Kennedys’ debut album is a rush of jittery nerves frayed by the state of the world. With sharp wit and vicious delivery, it uses irony and humour to reveal the true horrors of the modern world and the many forms they take – capitalism, fascism, wealth inequality and war, to name a few. Designed to provoke and aggravate, the likes of California Über Alles, Holiday In Cambodia, Kill The Poor and I Kill Children are frenzied, dark bursts of malaise that are somehow also playful. That makes this album a startling listen that still has the power to unnerve to this day.

While letlive. didn’t intend for this fourth full-length to be their last record when they recorded it, it serves as a more than worthy swansong. Eschewing some of the post-hardcore dynamics of the previous two records, If I’m The Devil… folded elements of soul and pop music into its songs, while also implanting bigger and more melodic choruses into the equation. The result was the band’s most commercial-sounding – and, as a result, perhaps most punk – of their career. As he had done previously, frontman Jason Aalon Butler continued to explore his personal identity, while also railing against police brutality and systemic racism. The result is an album that’s as harrowing as it is life-affirming, but which is permeated by an inspiring, rousing immediacy.