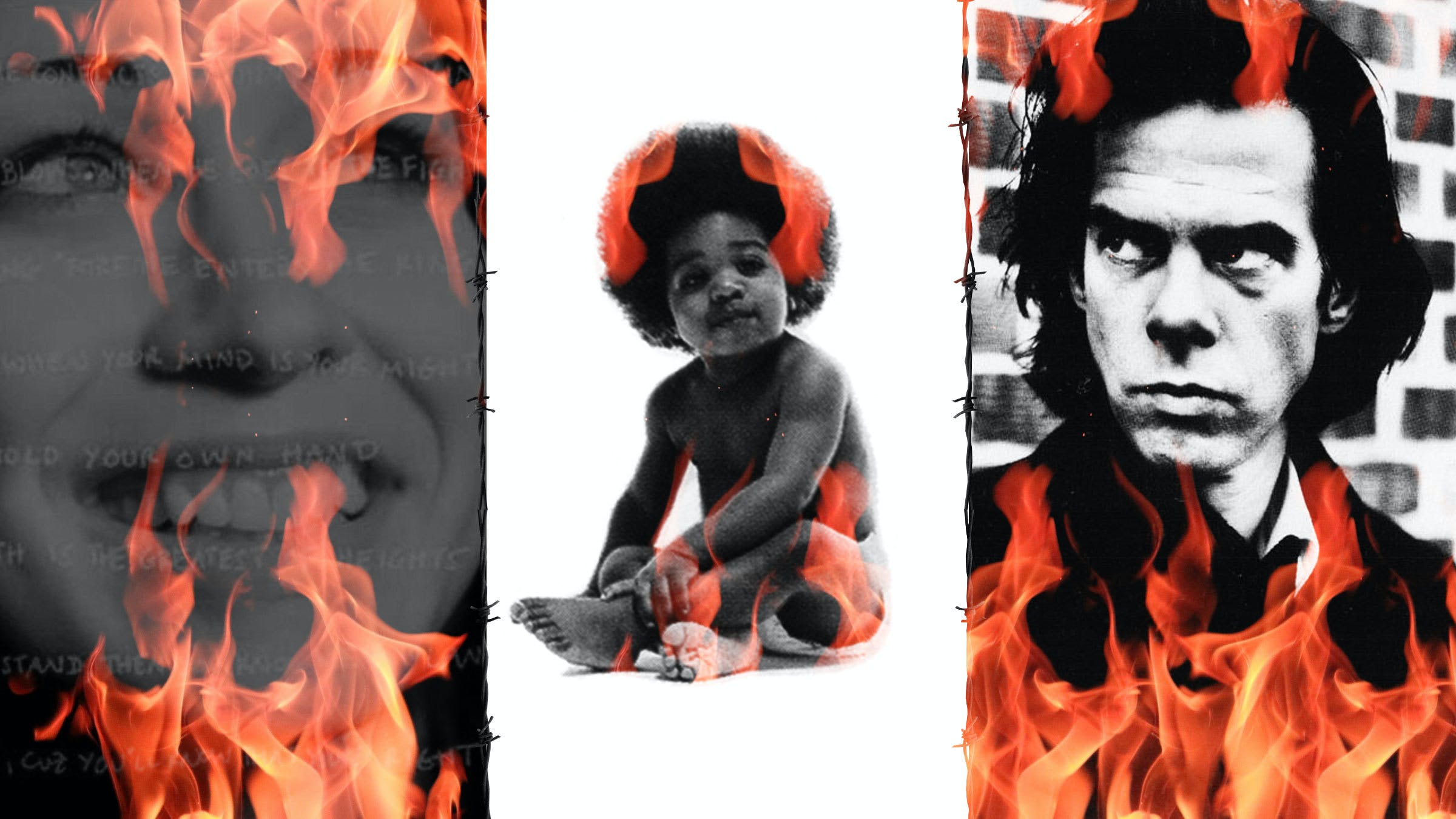 Heavy metal is generally considered to be rock’s most “evil” subgenre. And with good reason – though that designation was applied to heavy pioneers like Black Sabbath and KISS against their will, metal bands have since come to revel in the role, if only for the Halloweenish fun of it. By now, enough metalheads have dedicated themselves to crafting music that gives off a sense of real menace – not just anthems to the Devil and Hell, but riffs and rhythms that channel the horrible darkness at the heart of humankind – that the description makes sense.

But metal doesn’t have a monopoly on evil. Plenty of other musicians – from country stars to rappers – have used their talents to craft melodies that make the listener feel as though they’re in the presence of Lucifer in one of his many forms. And for headbangers who are experiencing riff overload and/or are brutally hungover, these tracks serve as solid alternatives to their usual bread and butter, still brimming with blood and shadow even if they aren’t designed to crush eardrums.

In no particular order, here are 18 killer songs (because 18 is three sixes – get it?) that feel truly evil, even if they aren’t in league with Satan…

Nearly all of Nick Cave’s songs feel like they could soundtrack a chat in the bar with the Devil himself, but this track off of 1994's Let Love In, with its lyrics about a charming figure who will help you get where you want to go while hiding their true intentions to rob you blind – punctuated by an unmistakable, hair-raising chime – is undeniably devilish. Before Nick Cave & The Bad Seeds once played it at Barclays Center, Nick lamented, “Here’s a song that just keeps getting darker and darker as our poor little world does its thing.”

Garbage – As Heaven Is Wide

An underrated cut from Garbage’s 1995 debut, As Heaven Is Wide is a scathing condemnation of religion and the priesthood. The track’s confrontational tone is made all the more evil because it's vehemently anti-Christian rather than specifically satanic, focused more on contempt than theater. The fuzzy, grinding guitar at its core carries these themes along on waves of sonic magma.

Nothing’s more evil than family. The second track from Springsteen’s Darkness On The Edge Of Town is by no means metal, but its tailfeather-shaking bassline, whiskey-soaked guitar, jangling piano, and pentecostal angst give it a dive bar paganism that plenty of Scandinavian cultists only dream of. If you got drunk with the Devil and gave him a dollar for the jukebox, he’d put this track on.

'When I die, fuck it, I wanna go to Hell…' Thus begins this eerie confession track by The Notorious B.I.G., framed as a phone call to a panicking Puff Daddy in which the rapper admits that he hates his twisted life and wants only to die. Biggie’s outright openness about his messed-up past remains uncommon for hip-hop, and his confrontation of suicide as a topic reveals a hard-edged honesty that few rappers have come close to.

The White Buffalo – The Whistler

The Whistler, a 2013 track by LA-based alternative folk-rock act The White Buffalo that was prominently featured in an episode of Sons Of Anarchy, might qualify as the ballad of this list. The track shuffles along in a dopesick way, making it a slow-dance track for people with nothing left to lose, while its lyrics suggest the sort of helpless need to cause violence and misery buried deep in the hearts of serial killers. Worst of all, the track is deeply relatable to everyone who’s ever been down and out, suggesting that maybe the Devil lives inside of everyone.

When it comes to modern music that perfectly captures the Southern Gothic vibe, few bands can match Those Poor Bastards. The Madison, Wisconsin-based haunted gospel duo have a unique low-fi sound that feels inundated with evangelism, crystal meth, and chiggers. Crooked Man is their grand declaration, an announcement of their sin-soaked almost-repentant brand of backwoods devil worship.

PJ Harvey – To Bring You My Love

The title-track on PJ Harvey’s 1994 album is a slow-building song about the trials, tribulations, and shit men PJ had to overcome before meeting her most recent lover. 'I’ve lain with the Devil, cursed God above,' she sneers. 'Forsaken heaven, to bring you my love.' It’s as if she’s shaking a man to say, “Don’t you realise what I’ve been through? Don’t your realise what I’ve put aside to be with you?” Her deep-seated contempt comes with a hip-swinging rhythm that breathes sin with its sacrifice.

Tom Waits – Starving In The Belly Of A Whale

Tom Waits’ entire Blood Money album, released in 2002, could be considered 'evil' by its very title alone, but the general tone of Starving In The Belly Of A Whale puts it a cut above the rest. The song takes the Old Testament story of the time Jonah spent three days repenting inside the belly of a whale after God sent it to swallow him, and uses it as a metaphor for the regretful feelings that build up over doing time in life's prison. Tom’s gruff voice makes the tale extremely relatable.

These days, Tyler, The Creator is lauded as one of the most interesting minds in hip-hop, but one wonders what rap fans who first heard this track from 2011’s Goblin thought. The song’s eerie beat and lines about subjects like telling Jesus to shut the fuck up definitely give off a fiendish atmosphere, but it’s the kinetic malice in Tyler’s voice that most imbues Yonkers with warlike power. Of course, its videos featuring a possessed Tyler hanging himself certainly help the vibe.

The Handsome Family – Far From Any Road

You might recognize Far From Any Road by Chicago husband-and-wife duo The Handsome Family as the theme song for Season 1 of the hit show True Detective. The show’s choice couldn’t have been more appropriate – though in some ways sweet and dulcet, Far From Any Road has a thick darkness about it, sounding like a ballad sung between a starstruck witch and a wandering man of wealth and taste.

Not including a song that begins with 'I’ve been a bad, bad girl' on a list of evil songs would be, well, criminal, but Fiona Apple’s major ’90s hit is sinister for a variety of reasons. The song is about a girl who will 'break a boy, just because she can,' and needs help with a good defence in order to get him back – but never once says she feels any remorse. 'What would an angel say, the devil wants to know?' Fiona asks with a sultry croon. We’re willing to bet he came back.

What sounds like a goofy, synth-driven lounge track quickly takes a dark turn as singer-songwriter Leonard Cohen gives a sneering observation of modern culture. If anything, the dichotomy of the song’s lyrics against its cheesy instrumentation and do-wop back-up vocals make the song’s bleak lyrics even more dark and twisted, like a murderous clown. When Leonard growls that you should 'take the only tree that’s left and shove it up the hole in your culture', we can’t help but cringe and nod at the same time.

Speaking of evil clowns, this EC Comics-style undead revenge story by the most hated rap duo in existence is about is about as gleefully monstrous as it gets. Though their music is usually more concerned with heavyset ingenues and cheap soft drinks than unholy darkness, ICP prove on 12 that their wicked clown personas are as immersed in horror as they are in gangland tomfoolery. Extra credit has to be given to producer Mike E. Clark, whose beat for this creeping horror is perfectly imbalance and horrific.

Delia Green was shot in 1900 in Savannah, Georgia by her lover, Moses Houston, after she called him a “son of a bitch”. This song, which was originally written by Blake Alphonso Higgs, is sung from Houston’s perspective, with wistful lyrics like, 'If I hadn’t shot poor Delia, I’d have her for my wife.' Johnny Cash's voice adds a ecclesiastical edge to this classic murder ballad.

Despite being more of a psychedelic rock rather than a metal group, Coven (who formed in 1967) are credited as first band to ever throw up the devil horns (yes, even before Dio and KISS), and had an blatantly satanic theme in nearly all of their songs. But the most evil Coven song of all is Satanic Mass, which is literally just a recording of a High Priest performing a Satanic ritual. If the altar bell at the beginning (rung nine times to invoke Satan) doesn’t raise the hair on the back of your neck, the Luciferian chants certainly will. Listen to it in a dark, candlelit room – we dare you.

Amigo The Devil – I Hope Your Husband Dies

Amigo The Devil’s songs are mostly sung from the perspective of real-life murderers and serial killers like Jeffrey Dahmer and Ed Gein, but I Hope Your Husband Dies – a tale of a regular guy wishing death upon his old lover’s new spouse – is the most evil of all, because there is nothing more blasphemous than wishing horrific grief upon someone you love. It’s also the song to which we can all relate most.

Featured prominently in the French-Belgian cannibal horror film Raw, Plues puties que toutes les putes (translated as “Bitcher than any bitches”) by French goth-turned-rap duo Orties is both a ton of fun and deeply malevolent. Even if you don’t understand the French lyrics referencing satanism, drug use, promiscuity, and necrophilia, the creepiness of the beat and snottiness of twin rappers Antha and Kincy give it an undeniably diabolical edge.

Murder By Death – The Big Sleep

There aren’t a lot of bands who do the modern dusty, dark country thing as well as Murder By Death, and that is showcased magnificently on their bleakest track, The Big Sleep. The song is all about a man taking stock of his life after he gets sentenced to death by electric chair for an undisclosed – but definitely heinous – crime. He sends a message to his wife and kids that there’s a box of money buried underneath a pine tree in their yard 'for which he never earned a dime', and tells them to 'live honest, and love again'.

Garbage’s Shirley Manson: “Being human is to be messy. If you think you’re above all that you’re in deep, deep trouble”

As Garbage unveil their first new album in five years, No Gods No Masters, Shirley Manson talks getting political, cancel culture, and why speaking up is more important than ever…

Shirley Manson and Garbage deliver righteous anger and a rallying cry on album number seven, No Gods No Masters.

Watch the video for Garbage's new single, No Gods No Masters

Garbage have released the title-track – and accompanying music video – from their upcoming seventh LP, No Gods No Masters.

Garbage have shared the opening track from their upcoming seventh studio album, No Gods No Masters.