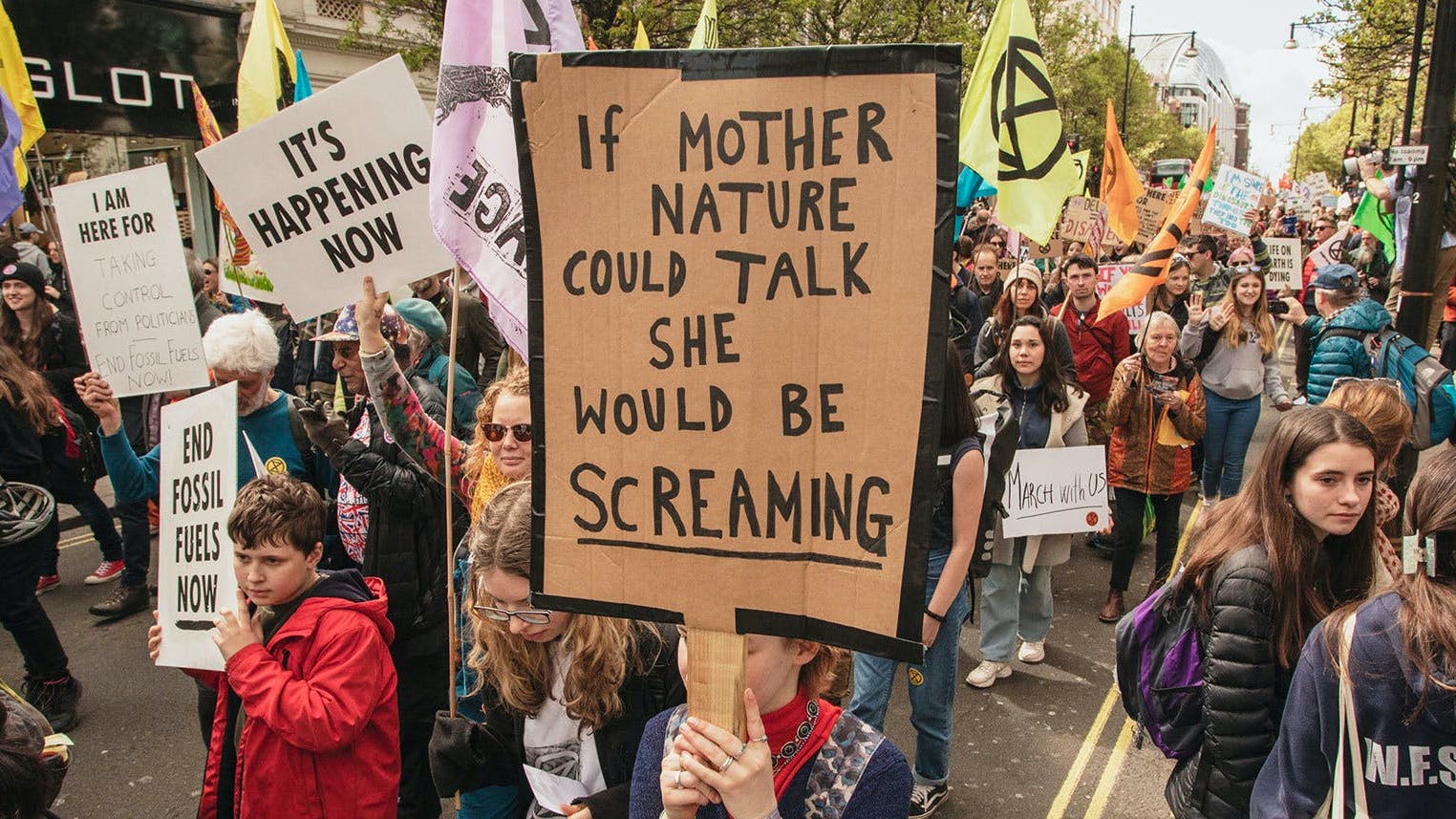 Lots of people avoid talk of the climate crisis because it can feel like the ultimate negative headline in a world that’s not exactly short on depressing news. And the reality is… it is bad news. Pretty much the worst, if we – meaning everyone: you and us, businesses, right up to governments – don’t take decisive action. And so far, we’re failing to do enough.

The good news, though? We know what needs to be done to prevent the warming of the planet getting even worse – the biggest of which is to transition off fossil fuels and onto clean, green renewable energy sources. Not easy, but doable.

And more good news! Though there’s still some way to go, among us – The People – awareness about the climate emergency has never been greater. In fact, much like the changing climate itself, you might feel like it’s everywhere at the moment: from Greta Thunberg releasing The Climate Book to David Attenborough’s hard-hitting Frozen Planet II TV series.

It’s also in the news headlines because, right now, world leaders are meeting in Sharm El Sheikh, Egypt, for the UN’s Climate Change Conference (COP27). Essentially it’s a gathering of top officials where they report back on the climate targets they previously agreed to, and make some more. You might remember the summit was held in Glasgow in 2021. Even still, it can all feel rather distant – like a bunch of policy makers are meeting up to work on some big looming issue.

But climate change isn’t a future problem. It's here now. Climate change meant the UK smashed dozens of records this past summer, not least when temperatures peaked above 40ºC. Europe suffered its worst drought in 500 years. Recently a third of Pakistan – an area roughly equivalent to all of Great Britain – was flooded. Climate change makes these weather events more extreme and more frequent. Without decisive intervention our future contains a lot more pain.

What’s all this got to do with music? Well, as Music Declares Emergency – the action group who bring artists together on climate – put it, there’s No Music On A Dead Planet. It’s not just the future of polar bears at stake, it’s everything – including the culture that we love.

Here are just a handful of the environmental change makers we think you should know about. Give them a follow on social media – it might just give you a little more hope that we can do this.

The science is quite clear about what needs to be done in order to protect the planet and ourselves from the worst consequences of climate change. So, when people, organisations or governments don’t do what they need to, or what they say they’re going to do (hello greenwashing!), there are few more effective ways of keeping them in check than hitting them with a lawsuit. ClientEarth are a group of lawyers battling for our future on the planet – climate action in courtrooms. And it’s incredibly effective. They’ve prevented the opening of any new coal-fired power plants in Europe over the past decade. This summer they took the UK government to court saying their climate plans were too weak – and they won. No wonder its famous music supporters include Coldplay and Pink Floyd’s David Gilmour.

Launched in 2021, and co-founded by legendary musician and producer Brian Eno, Earth/Percent is all about “unleashing the power of music in service of the planet”. Quite simply, they’re asking members of the music community – from bands to bookers, festivals to labels – to pledge a percentage of their earnings to fight the climate crisis. Earth/Percent have assembled an A-team of experts and scientists, including Prof. Brian Cox and Dr Tamsin Edwards, who then help distribute that financial support towards the climate projects doing the most impactful work. So, if you’re in the music industry and have been asking what you can do, this is the quickest and easiest first step to make a difference.

Maybe you saw their videos on the big screen at this year’s Reading & Leeds, or saw their #NoMusicOnADeadPlanet slogan trending on social media? Or read our cover story all about it? MDE is a group of artists, organisations and music industry professionals coming together to call for urgent action on the climate – not just for systemic changes within the music community itself, but also from governments and policy makers. They have thousands of musicians – stretching from Billie Eilish to IDLES, Mogwai to Nova Twins – signed up to their pledges, and recently launched a climate fan club. They’re all about community. So if you’re looking for a place to join other climate-concerned music fans, it’s a good starting point.

Documentaries like Netflix’s Seapiracy have done a lot to raise the profile around ocean health and the work of organisations like Sea Shepherd. As Architects’ Sam Carter told Kerrang!, “Humans are fucking lazy and will wait until the week before when someone goes, ‘There’s one fish left,’ and then everyone will go, ‘Why didn’t anyone tell me?’” It’s not just industrial-scale over-fishing that’s threatening the future of marine wildlife; warming water temperatures are endangering whole ecosystems, species and habitats, too. Sea Shepherd is all about conservation, using direct action to protect the oceans that are absolutely fundamental to a stable and healthy future for all of us. They regularly organise volunteer beach clean-ups at different points around the UK coastline, so get involved.

Planting young trees is good to counteract the climate crisis, but protecting the mature ones we already have – sometimes that are thousands of years old – is even more important. Rainforest Action Network have been doing that for 40 years, trying to preserve forests, keep the climate secure and fight for the rights of indigenous communities. This isn’t just about the Amazon – though the recent election of Brazil's president Luiz Inácio Lula da Silva is encouraging news on that front – it’s about being proactive regarding the integral role forests, woodlands, even your local park, is going to play in balancing climate change and creating a cleaner, greener, safer environment wherever you are in the world.