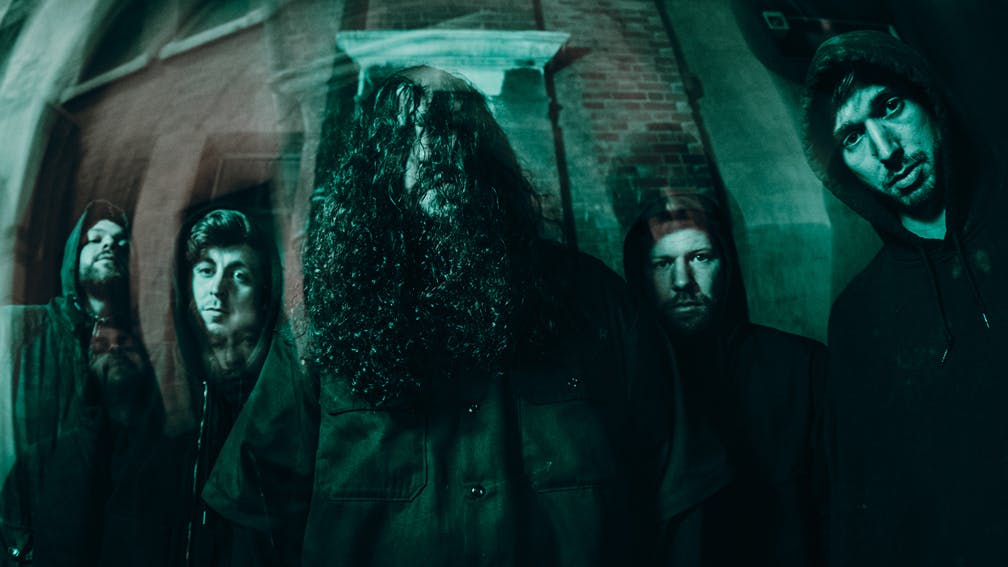 Everywhere you look in the UK’s thriving metal scene – from the ground-breaking, progressive nu-metal of Loathe to the throwback screamo stylings of Static Dress – it feels like something incredible is happening within the current generation of bands. The latest name to add into the mix are Graphic Nature, the thrilling metal five-piece who dabble in a heavy-hitting nu-metal sound that recalls the genre’s biggest names, underpinned with a powerful lyrical message about mental health from frontman Harvey Freeman.

With their new EP new skin dropping this week, here’s everything you need to know about the hotly-tipped metal newcomers…

Fans of Chino Moreno and co. will have picked up on how Graphic Nature’s name echoes a track from Deftones’ 2012 LP Koi No Yokan, but the influences don’t stop there.

“We actually had the name before we even thought about the sound of the band,” Harvey explains. “We just loved the way the words sounded. That said, we love Deftones – especially [2000 album] White Pony – and the creative process that goes into making their songs. But so too do we take influence from ’90s nu-metal bands like Slipknot and Korn, as well as drum’n’bass music, both of which you can really hear in our sound.”

2Their creative process is intense

Harvey isn’t one to set aside time to write music. Whenever inspiration strikes, he’ll get creative, even if that makes for some pretty dark nights.

“Whenever something hits me I have to write it down,” he says. “Often, I’ll just be sat in bed listening to instrumental music while my wife is asleep, and that can send me into a creative and experimental headspace. There’s a vibe that comes with that which you only get at night when you’re alone with your thoughts. It’s not always the best thing – when those darker thoughts come out, things can feel pretty bad – but it adds a realism to our music.”

3Their lyrics take an unflinching look at mental health

“Grief, loneliness, agitation, solitary confinement… all of those feelings are present,” he says. “It’s everything I’ve been through and a genuine portrayal of those experiences. There’s a song for each feeling I’ve encountered when dealing with mental health – I wanted to show how mental health isn’t just one thing, and how there are so many different aspects to it.”

Nu-metal is key, but so too is Harvey’s love of video games.

“In terms of soundtracks and the influence they have on our music, I love everything [video game company] Square Enix does,” Harvey says. “Final Fantasy and Kingdom Hearts are two big ones for me – there’s no lyrics, but I love how they still punch you right in the feels. I can listen to metal all day, but it’s often only when I take in the more instrumental side of things that my creativity really flourishes.”

5Their EP new skin is a nu-metal tour de force

It’s out this week. We’ve heard it, and it fucking rips. Classic nu-metal aggro mixed with modern, experimental twists and turns, it’s a sure-fire win for fans of Blood Youth and Loathe, while ’90s nu-metal lovers will likely get a kick out of new skin’s dissonant chug too.

“This music is all we’ve ever wanted to do,” Harvey says of new skin’s sound. “All of us in Graphic Nature have been in bands before, but this the most love we’ve ever felt for a project. We’re all about making music that engages people and gets them feeling a little uncomfortable, because that’s when your senses get heightened and things start to feel a bit weird. new skin is dark, but it’s an outlet for the feelings of both us and the listener, and providing that release for people is the main goal of this.”

Graphic Nature’s EP new skin is released on February 25 via Rude. The band play The Black Heart in London on April 13.

Graphic Nature are raising “awareness of the severity of what mental health issues can do to us as humans” with their new single, Headstone.

Watch the video for Graphic Nature’s new single White Noise, which is about “sensory overload and the overwhelming feeling of claustrophobia that neurodivergent humans experience on a near daily basis”.

Killer Kent newcomers Graphic Nature have shared the title-track from their upcoming UP, new skin.