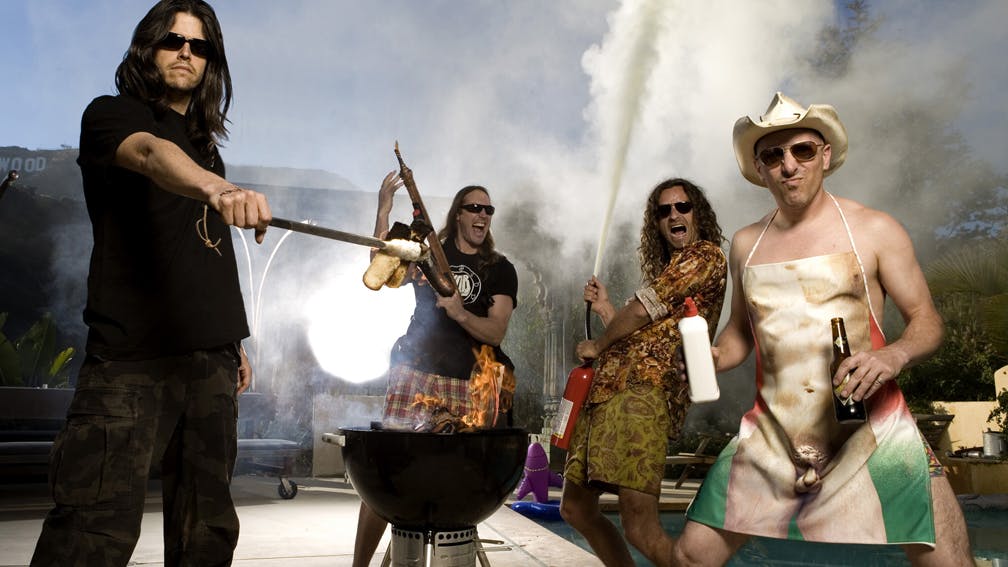 At the start of this year, Tool frontman Maynard James Keenan tweeted to confirm the news fans had long been waiting for. The recordings for album number five – what will be their first since 2006’s 10,000 Days – had been completed with his “final vocals tracked months ago” and the progressive art-rockers are now looking at a “long process of mixing”. Which means that, though they’ve promised nearly as much in the past, a new Tool album might just be in sight – perhaps even coinciding with their first European tour in over a decade this June. So with that in mind, here are six things we want from it…

Let’s face it… if there’s one thing Tool are undisputed masters of, it’s this. Sporadic as their output may be, the Grammy-winning quartet have built their name on riffs that pull the rug from under your feet, purposefully engineered to be as blindly disorientating as they are vivaciously mind-expanding. Often it’s the sheer wealth of rhythmic ideas being thrown at the listener that intensifies the on-going displacement, some fans suggesting there are up to 50 different meters across 2001 single Schism’s brooding seven minutes. Recently, we rounded up Tool’s 10 Best Riffs across their three decade-long career, though in all fairness similar lists could be made on single tracks. It’s a trend that looks set to continue with Rage Against The Machine legend and long-time friend Tom Morello making up his own list by describing the upcoming works-in-progress as “epic, majestic, symphonic, brutal, beautiful, tribal, mysterious, deep, sexy and very Tool” – which are all words you’d be hoping to hear from someone lucky enough to be in the loop.

If it were not for Lateralus’ title track, many rock fans might never have heard of the Fibonacci Sequence – an old Sanskrit mathematical system related to sacred geometry, where each number is the sum from the two that precede it. It’s how the musicians used to write the vocal rhythms in the verses, applying the concept to each group of syllables sung. “On that song, Justin [Chancellor, bass] brought in a riff that went from nine to eight then seven,” guitarist Adam Jones told this writer for Tool’s Kerrang! cover story in June 2017. “And Danny [Carey, drums] saw it had a connection to the Fibonacci, so he started trying to work in elements, then Maynard came in and we started telling him about the sequence and he thought it was really cool. The song came from trying to relate to those things in life or nature we all have in common… something that people have been studying since the beginning of time.”

As anyone that’s fallen asleep listening to Tool will be able to attest, they certainly have a penchant for concluding their works in disarray, often at punishing volumes. Their 1993 debut full-length closed with Disgustipated – a voodoo death chant in which Maynard repeats the words, ‘This is necessary, life feeds on life feeds on life’ as what sounds like a tribe of Orcs march through a field of crickets. But it was the final minutes of 2001’s Lateralus that really made listeners’ ears prick thanks to a sample from someone claiming to be a former Area 51 worker on the run. The distress call warns of extraterrestrial beings and impending disasters before being dramatically cut off. Bizarrely, the clip was real – taken from an actual call on a paranormal-themed Nevada radio show before the studio inexplicably cut out for half an hour on September 11, 1997. According to legend, the caller later revealed himself to be a hoax, though how the warning arrived four years to the day ahead of world-changing events remains a mystery.

Along with the aforementioned interest in sacred geometry and the golden ratio found in Fibonacci numbers, Tool have also shown they’re pretty well-read on existential philosophy. Most notably on Ænima track Forty Six & 2, which was inspired by Sigmund Freud prodigy Carl Jung. It was this Swiss psychoanalyst who conceived the idea that human evolution was awaiting its next step from our current 44 autosomes and two sex chromosomes to, erm, Forty Six & 2. The theories were later expanded upon by American author and teacher Drunvalo Melchezedek who claimed in his Flower Of Life workshops that the Earth was covered with morpho genetic grids 60 feet beneath the surface and the new grid for mankind – referred to as Christ Consciousness – was completed in 1989. Whoever said rock music couldn’t be educational was talking out of their arse.

Not just any old scream, but that scream. The one that sounds like someone putting a chainsaw to their larynx slowed down at half-speed. While there’s been new music from A Perfect Circle and Puscifer to satisfy fans of Maynard’s melodic hooks, those in favour of primal roar will be even more keenly awaiting the arrival of Tool’s fifth opus. It’s a noise that commands attention – the words ‘Die now’ from early hit Jerk-Off, ‘Suck and suck’ in Ticks & Leeches, Eulogy’s final ‘Goodbye’ and that unearthly howl from The Grudge all equating to Olympian efforts to move air with lung. Fingers crossed we’ll be hearing more of that metallic misanthropy on album five.

Making good use of Adam Jones’ experiences of working on special effects for films like Jurassic Park and Terminator 2: Judgement Day, as well as contributions from esoteric artist Alex Grey, the aesthetics of Tool have always been as staggering as their sonics. Early videos for Sober and Prison Sex featured stop-motion animations of clay models in eerie, dark-lit surroundings while more recent offerings have spliced mixed mediums at the cutting edge of modern technology. Considering their last full-length won a Grammy for Best Recording Package, its cardboard case containing stereoscopic eyeglasses to view a 3D booklet, there’s no doubt they’ll be be planning to blow our minds in every way imaginable. Watch this space.