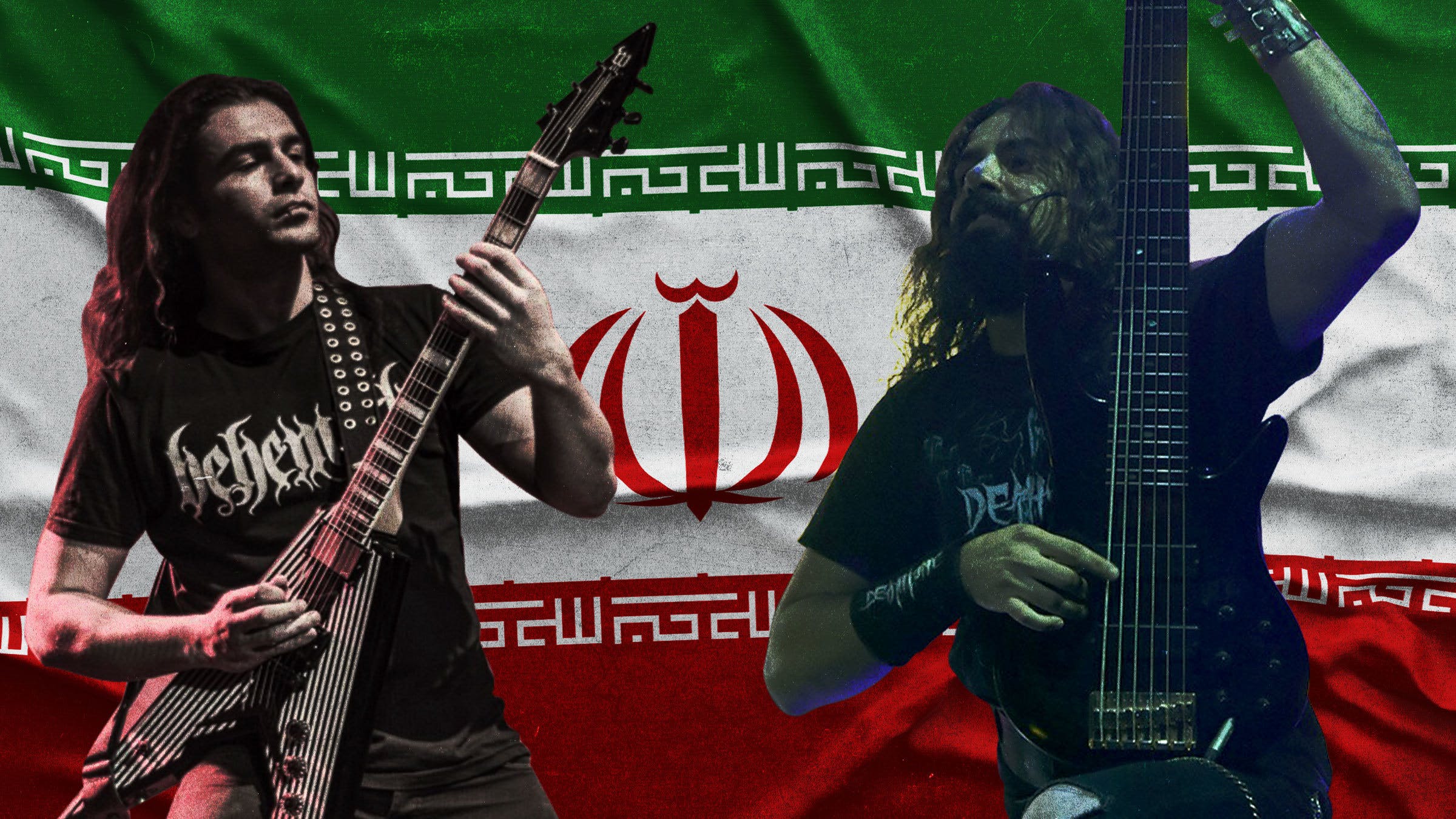 On the morning of November 9, 2015, ten members of the Islamic Revolutionary Guard burst into the Tehran home of Nikan Khosravi and arrested him. Nikan’s belongings were seized, and he was taken to solitary confinement, where he began a grueling series of daily interrogations and threats from the guards.

Nik’s crime: playing heavy metal. As members of death-thrash band Confess, he and his bandmate Arash Ilkhani were accused of blasphemy for playing music that spoke out against the Islamic Republic of Iran and the nation’s Supreme Leader. Upon first arrest, Nik and Arash faced execution for their crimes.

“Once, the warden opened up the hatch on my cell and said, ‘Get ready, you're about to get executed! No need for trial cause you're a heretic!’” says Nik. “And then came back something like 45 minutes later and said, ‘Not tonight!’ So you're constantly dying and coming back, with them playing with your brain.”

While Confess’s case has been the most highly publicized of its kind, oppression, censorship, and the fear of arrest is something that Iranian heavy metal bands deal with daily. With a terrible human rights record and rigid laws against the blaspheming of religious and official authorities, Iran is a country where music -- especially rebellious, angry music -- is carefully monitored, and those who make it in defiance of the authorities can be arrested and even killed for doing so. And yet, as in all rigid cultures, heavy metal thrives in Iran, rising to meet the nation’s propaganda state with pure sonic fury.

Freedom of expression isn’t guaranteed in Iran’s constitution, which was put in place in 1979 after the Islamic Revolution replaced the country’s monarchy. The Constitution opens with a declaration Allah being the divine sovereign of the country, and directs resources to “good moral values based on faith.” This, supported by Sharia-based blasphemy laws, means the Iranian government can censor and pursue anyone they feel is a moral or societal menace -- and punish them with extreme prejudice.

“Metal bands can get permission from the Ministry of Islamic Culture and Guidance to play in small to big venues, but it is completely different from a band to another band,” says Nik. For a band as angry as Confess, he says, such permissions are “impossible.” “There are three levels of the music scene in Iran: those who get to play in Milad Tower, the underground bands, and the solitary confinement detainees! We're coming from there…”

The Ministry of Islamic Culture and Guidance is one of Iran’s highest ministerial bodies, existing as an amalgamation of both Iran’s ministry of art and of tourism after the Iranian Revolution in 1979. While media entities can be privately owned in Iran, their products are subject to heavy censorship by the Ministry, which doesn’t allow what it considers either anti-Isamic materials or anything that speaks against the national interest. These, of course, comprise the two biggest themes in heavy metal lyrics: spiritual rebellion and condemnation of the government.

Part of what elevated Confess’s case to international renown was the severity of their punishment. For all intents and purposes, Confess are the kind of ripping, crunchy thrash band heard around the world; Nik says that the band’s sound was heavily informed by acts like Slayer, Lamb Of God, and Pantera. But after they were arrested the lyrics of songs like Teh-Hell-Ran and New World Order -- which might seem par for the course for any European or American band -- earned Nik and Arash a sentence of six years in prison. When they appealed the verdict and fled the country, that sentence was changed to over 14 years in prison...and 74 lashes.

“I was laughing!” recalls Nik. “My lawyer called me after the announcement of appeal and said, ‘Guess what!? They turned your six years to 12 and a half for insulting the president and supreme leader, disturbing public views on the regime through you music...But that 74 lashes as the cherry on the top was that Islamic part! It was actually a message to the rest [of Iran] that this is what happens if you confront our propaganda! But really? Lashes?”

While Confess were forced to escape Tehran to avoid their sentence -- Nik and Arash fled to Norway in 2014 after appealing their case, and are currently working on new music -- some even more extreme bands have stuck it out in Iran. Deathtune, also of Tehran, play vicious death metal, their fandom inspired in part by an upbringing where typical party music was impossible to attain.

“Due to our the restrictions, we had no normal life and we were not allowed to listen to any music, have fun, dance, or play any instruments,” says guitarist Saeed Ghadiany. “They were extremely illegal. Nowadays, the atmosphere has improved for musicians, even for people, but it is really twisted and complicated.”

READ THIS: The 20 Canadian bands you need to know right now

Saeed described Tehran’s music community as supportive, with fellow musicians doing their best to help out even crushing death metal bands. “The Iranian government are not fully against metal, and we’ve even had performed five performances, fully authorized. A lot of people had tried so hard to help us take those authorization papers. Unfortunately, in our fifth and the last concert, we got arrested and we were called to the court, and since we had the authorization papers we were acquitted...but since then nobody has been allowed to perform metal music any more.”

That said, the guitarist sees the war against metal in Iran as part of a universal one: “This kind of music has always been confronted and attacked by narrow minded radicals.”

“There are no metal shows or any metal bars or clubs here so there is no place for us to enjoy our time as metalheads” says Ramtin Dahti Moghaddam, vocalist and guitarist of melodic death metal band Padra, known in part for performing only in Farsi. “All we got is a few metal cafes and some private stressful metal shows at which nobody can stand up or drink or even show metal horns, but still there are lots of metalheads here. There are a few studios which metal bands can practice there because the owner is a metalhead. We are always worried about getting arrested, but we don't let fear to impact on our music we don't censor ourselves even if it leads us to get an arrest.”

As in many parts of the world, fear in Iran is primarily a religious tenet. In a country where church and state are indivisible, religious fundamentalism is simply part of enforcing the law. And while most of the bands we spoke to are as quick to dismiss Islam as any black metal band is Christianity -- Nik from Confess points out that he and his family have never been Muslim, saying, “The system is using the picture of ‘The Muslim Country’ as a propaganda to show the world that Iranian nation is with the Islamic regime and are supportive” -- it still means that being an anti-religious band is dangerous in Iran.

“We are totally against religious radicalism,” says Ramtin, who says that while his band has never been physically attacked, they’ve been called out on conservative Muslim websites.

But while this outlook is prevalent among metalheads, it’s not universal. Melodic metalcore band Calibre claim that though getting a metal album made and finding a rehearsal space can be difficult in Tehran, it’s certainly doable, provided you put the hard work into it.

“It’s not that dangerous, actually!” says guitarist Hamid Saleh. “I think the media is exaggerating about the condition here. Although the process of receiving permission for an album is really difficult, and you can’t play metal in large halls, you still have your some venues and can play in front of 100-200 people, legally.”

Perhaps it's Calibre’s more palatable take on heavy music that gives the band a leg up when it comes to being able to perform and record -- their sound is loaded with catchy riffs and clean vocals, and doesn't seem as outwardly hostile towards Iranian society and religion as Confess and Padra are.

READ THIS: The 10 greatest metal songs by African American Artists

"I think music has nothing to do with religion," says Hamid. "They are totally two separated subjects. Our songs and lyrics are all about human feelings, and the struggles we all have inside. They have nothing against any religion. In the words of James Hetfield, 'Music knows no border.' So neither do our feelings and inner fights."

In Hamid's mind, Iran may have different cultural parameters than other countries, but for a band like Calibre, it's the same as any other scene. “I think [the metal scene here is] like most countries!" he says. "Getting together and finding a place for rehearsal is quite easy. We try to do it regularly, for keeping the band alive and active."

More so, he’s only as worried about being confronted by the authorities as any other dude in an All That Remains shirt. “We actually not really worried about being arrested. Although people would pay more attention to someone who wears all black or carries an instrument, it’s not that serious or dangerous. You’re safe as long as you don’t do something stupid.”

For many Iranian metal musicians, however, that defeats the purpose. “To us, art doesn't need no permission from no one!” says Nikan Khosravi. “It’s ridiculous. The others who get to play, good for them. But it kind of feels like being betrayed.”

Given the selective censorship in Iran and the sheer weight of the country’s artistic oppression, one might assume its artists would eventually give in, and either leave their homeland or write music that is more palatable. Instead, this confrontation has only made them more determined to play extreme metal -- and to do it for the metalheads of Iran. Even Nikan, now living in Norway under asylum, hopes to return to Tehran and play metal once more.

“Of course!” says Nik. “That's my city, you know! That's where it all got started and I can tell you that Confess is definitely a Tehran thing! Our sound is as chaotic, dirty and aggressive as the place that it was created at!”

“We love metal music,” says Padra’s Ramtin Moghaddam. “It was there for me at the darkest days of my childhood. We risked a lot of things to play metal. I know it does not make sense, but when you love something you can't live without it.”