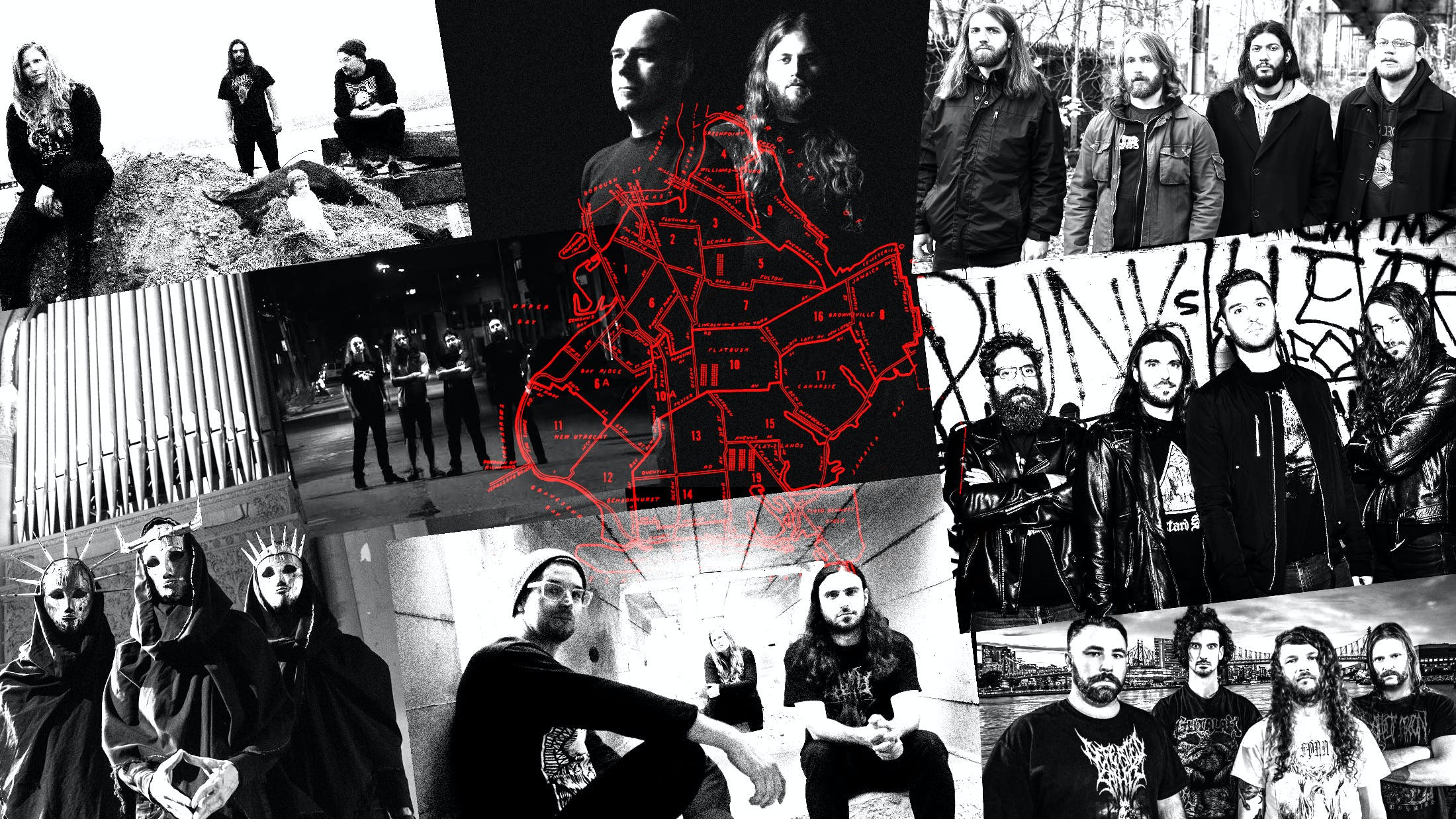 New York City has been home to such acclaimed metal acts as goth greats Type O Negative, thrash behemoths Anthrax, and fusion legends Living Colour. The city has bred an influential death metal community, spawning icons such as Immolation, Malignancy, and Suffocation. And although New York metal may have faded from mainstream radio and late night MTV programming, the city has a new and burgeoning epicenter in Brooklyn.

A quick subway ride from Manhattan, Greenpoint is Brooklyn’s home to the legendary Saint Vitus Bar, a headquarters of sorts for the metal arena, where a number of heavy bands are producing exciting music with influence far beyond New York City’s borders.

Below are eight of the most important Brooklyn bands currently contributing to the noise, and raising the bar for bands all across the United States.

Probably the most daring, experimental band in New York metal, Imperial Triumphant employ neoclassical composition in their avant-garde -- sometimes technical -- take on modern black metal. With the release of their third full-length album, Vile Luxury, the band take aim at the decay that has crept into New York City, reinterpreting the sounds of the metropolis -- “from top floor luxury to the rotten underground,” as they say -- in their own chaotic way.

“What’s so interesting about our ‘scene’ is that there isn’t any discernible sound native to New York City bands,” says frontman Zachary Ilya Ezrin. “Every group is doing their own thing. We’re all headed in the same direction, just on different paths. There’s definitely records from our city that inspire us, but more importantly we like to collaborate. Our music has featured guest appearances from members of Krallice, Pyrrhon, Artificial Brain, Couch Slut and Bloody Panda. It’s the New York culture: this city has more languages spoken than anywhere else in the world.”

Anicon showed tremendous growth between their debut, Exegeses, and their sophomore effort, Entropy Mantra, released this past June. Comprised of four New York City stalwarts, Anicon is a practice in self-sufficiency, with vocalist/guitarist Nolan Voss (also of newcomers Pyrolatrous) handling the recording duties, and vocalist/guitarist Owen Rundquist (also of Trenchgrinder) handling the artwork and layout for the new album. Recently signed to Vendetta Records, Anicon is poised to break out from local prominence and make some national noise, with their riff-heavy sound, laden with harmonized guitars and complex rhythms.

Entropy, in particular, focuses heavily on bleak themes such as oppression, depression, anxiety and the struggle for self-preservation. “I think the sheer number of people here -- and the struggle most of us experience -- fosters a sense of community that's unique to this city,” says Owen Rundquist of New York. “Everyone involved is working hard to push their output and that's the most defining thing about the music scene. Sometimes it's a tough place to live, but it's full of hard-working people that take music very seriously — it's an incredible environment for art when you're not struggling to pay rent.”

Imperial Triumphant’s labelmates are Mutilation Rites, unleashing their third full-length via Gilead Media this year. Infusing even more punk into their doom-laden black metal, Mutilation Rites juxtaposes cold imagery with their uniquely urban soundscape. Although he is no longer with the band, drummer Tyler Coburn (of Nashville-based bands Alraune and Yautja) pushed Mutilation Rites' compositions even further into the crusty arena of post-apocalyptic grindcore on this most recent release, Chasm. To underscore its urbanity, drums and some guitar tracks were recorded at Saint Vitus Bar.

“The heavy music that has been coming out of Brooklyn in recent years is not based on...a specific cultural thing about living here,” postulates guitarist Michael Dimmitt. “How could it? Hardly anyone is from here. Brooklyn music is based on the exchange of ideas from people from all over the country. Brooklyn doesn’t have one specific sound, but it does have very driven individuals; a pulse that’s different from any other part of the country. New York City is where creative, ambitious people come to find like-minded individuals and opportunities. Sure, it’s a difficult place to make ends meet, especially when trying to play music, but there is something about the energy of this place that keeps us here.”

Belus capitalized on the success of their 2014 split with Anicon by releasing their powerful debut album late last year. That work, suffused with atmosphere and grandiose riffs, showed that Belus were more than merely the sum of their parts. Lesley Wolf (bass player for Mortals) and Matt Mewton (guitarist for Woe) together with drummer Jacques Johnson comprise a black metal trio so unique in sound and attack that they could exist nowhere other than Brooklyn. It’s there that Belus is encouraged and inspired by similarly minded artists to take risks using syncopated rhythms, indie-leaning, noise-oriented guitar lines and grainy production not often found in black or doom metal.

Such support is incredibly valuable in a tough town such as Brooklyn. As Lesley Wolf explains, “Sometimes [Brooklyn] bands can feel a bit lost in the waters. The hardest part about keeping up a presence [in Brooklyn] is the difficulty of scheduling practice and shows and tours and recording when everyone has a demanding work life, other bands, plus personal lives to contend with. The support that comes from [other musicians] within the Brooklyn metal scene is crucial.”

No scene would be complete without the boundary-shattering work of Pyrrhon. Effortlessly combining death metal, grindcore, and noise, the band produces some of the most unsettling and provocative music on the planet. Frontman Doug Moore (also of Seputus, Weeping Sores and Glorious Depravity) uses a wide range of vocal deliveries all supported by the dizzying work of math wizard Stephen Schwegler behind the drum kit. What Passes for Survival, released in late 2017, saw the band jump to a major label and begin to make serious waves in the American metal scene.

Still without a full-length to their credit, the duo of Mario Diaz De Leon and Samuel Smith (of Artificial Brain) are easily found opening for some of the larger acts to come through Brooklyn. Their brand of blackened death was enough to immediately garner attention from the elite Canadian label Profound Lore. Another band pushing boundaries, Luminous Vault intertwines industrial, blackened death metal with clean synth lines recalling the ‘90s heroes that put the Greek black metal scene on the map. Luminous Vault is a great reason to get to Saint Vitus Bar early, chat with friends, and catch one of the more exciting duos in metal.

Although the three musical prodigies of this band haven’t released an album in two years, they are still a driving force within the New York Scene. Comprised of guitarist Kevin Hufnagel (also of Gorguts, Sabbath Assembly, and Vaura, among others) bassist Colin Marston (also of Behold the Arctopus, Gorguts and Krallice,) and human drum machine Jeff Eber, the instrumental trio shares more in common with modern jazz than heavy metal. They are able to effortlessly communicate with their audience through instrumentation and without the use of vocals. Their carefully constructed compositions might seem like “musician’s music” at first blush, but Dysrhythmia will forever have universal appeal.

Woe’s 2008 release, their debut LP, A Spell for the Death of Man, woke up the American black metal scene, shifting the sound away from the watery fluidity of Cascadian metal towards the harsher, more theatrical second wave sound. A full nine years later, joined by Lev Weinstein -- a man who has blackmailed the Brooklyn scene into letting him drum for almost every band -- Woe released Hope Attrition, their fourth LP, and their stock rose immeasurably throughout the world. They have since become leaders of the scene, with Chris Grigg pushing his vision ever forward. Now incorporating sounds and ideas from bands outside the continental United States, Woe has become a global force in the black metal scene, touring frequently and with unending success.