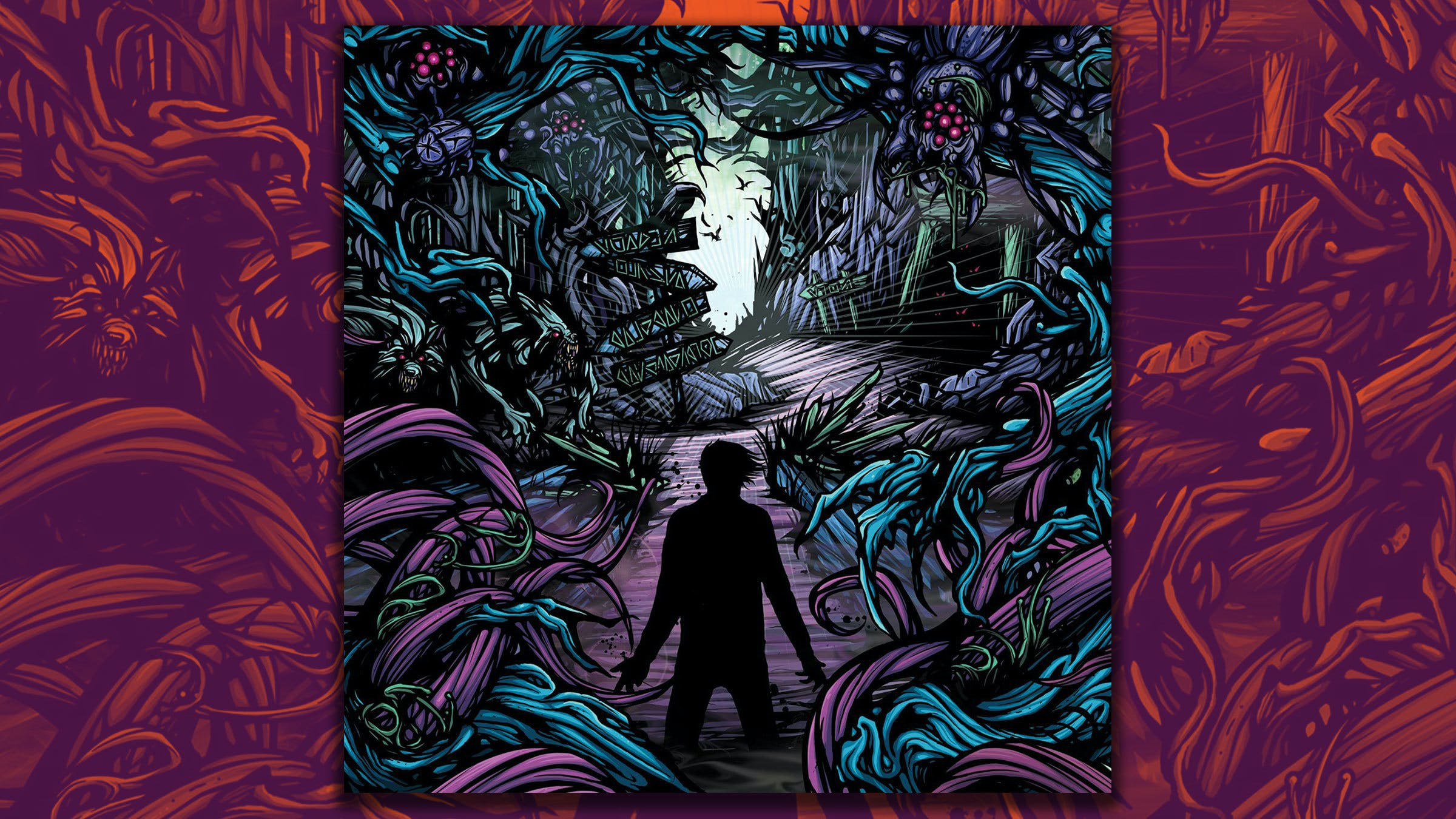 A Day To Remember’s breakout single, The Downfall of Us All, begins with the band chanting the song’s lead riff in a lighthearted a cappella – like a musician sounding out a melody to teach another player, or the way a fan amateurishly recites a hook they can’t recall the words to. Suddenly, vocalist Jeremy Mckinnon unleashes a roaring 'Let’s go!', and in comes the chugging, double-bass-backed riff. It’s a titanic metalcore breakdown that’s ripe for swinging fists to, but it’s also catchy as fuck. At the time of its release, this was revolutionary.

As an opening line from the millennial songbook, it’s not universally iconic in the way 'some-BODY' and 'it’s been' are. But if you were a teen or tween in 2009 who wore Vans, requested Hot Topic apparel on your holiday wishlist, or attended Warped Tour, then 'da-da-da-da-da-da' will likely lurk in the catacombs of your memory until the day you die.

The Downfall of Us All is the intro track on ADTR’s gold-certified, 2009 album Homesick. Released 10 years ago today, the record single-handedly changed the course of two of the most prosperous rock subgenres of the 21st century: pop-punk and metalcore. Although the two had been flirting with one another throughout the ’00s – a crush that could arguably be traced back to the cupid's bow of early My Chemical Romance and Fall Out Boy – ADTR were the first to successfully fuse what were long considered oil and water: anthemic, commercially viable pop-punk and bone-crushing, mosh-inducing metalcore.

The Ocala, Florida, quintet made their Victory Records debut in 2007 with For Those Who Have Heart. It was a heavier and less-refined album than Homesick would be – one that didn’t stray too far from the work of contemporaries such as Senses Fail and Silverstein. But it hinted at ADTR’s future legacy. The record’s opening track is a scorching melodic hardcore blitz that transitions into its mosh-part with the phrase, 'My friends come first, that’s the bottom line.' A pop-punk mantra delivered with hardcore spirit.

The members of ADTR were pop-punk kids who cited Rancid and blink-182 as their inspirations to pick up instruments. However, in their tiny hometown scene, hardcore and metalcore ruled the kingdom. “We played pop-punk and threw breakdowns in the middle of these songs so people in Ocala would take us seriously,” Jeremy McKinnon said in a 2012 interview with Music Connection. “That’s where we came from – it didn’t make sense.”

A year after dropping FTWHH, the band re-released the album with a few bonus tracks, including a cover of Kelly Clarkson’s mega-hit, Since U Been Gone. In the heyday of the Punk Goes… series, it wasn’t uncommon for bands of their ilk to cover pop hits. However, any undertones of irony were squashed by how comfortable they sounded belting out a Top 40 cornerstone. Most of the credit goes to Kelly Clarkson for the sheer strength of the song, but it was a convincing cover that proved they had the chops for a pop-punk crossover.

In the first half of 2008, ADTR toured with a smorgasbord of metalcore bands like Silverstein, The Devil Wears Prada, and Protest The Hero. But by the fall, ADTR were opening for quintessential pop-punk band New Found Glory on The Easycore Tour. NFG may have coined the term, and Four Year Strong and Set Your Goals may have spawned it into existence, but ADTR baptized the new subgenre – playing breakdowns but smiling – with the release of Homesick.

NFG guitarist Chad Gilbert – who had roots in hardcore but found his fortune in unabashed pop-punk – produced and wrote “a few really catchy parts” on Homesick. But the album was mixed by Adam Dutkiewicz of metalcore goliaths Killswitch Engage. It featured guest spots from Mike Hranica of trendy metalcore companions The Devil Wears Prada, and Vincent Bennett of deathcore punishers The Acacia Strain. But its final track, If It Means A Lot To You, was a heartfelt, mostly acoustic duet with Sierra Kay of Versa. It would become ADTR’s most popular song (certified gold alongside The Downfall of Us All in 2015), but didn’t sway metalcore kids from tearing it up at their shows. Instead, ADTR’s dual commitment to two completely different styles expanded their fanbase without ever caving in on itself.

Mashing genres became a ubiquitous technique across all forms of music throughout the 2010s, so it can be difficult to remember just how unusual ADTR were at the time. In the early ’00s, bands like Silverstein, Underoath, As I Lay Dying, and Atreyu were merging late-’90s metalcore with the mall screamo of bands like The Used, Senses Fail, Taking Back Sunday, and AFI. At the same time, the likes of All That Remains, Killswitch Engage, Avenged Sevenfold, and Bullet For My Valentine were melding their love for Pantera and At The Gates with the post-grunge melodies that were populating rock radio.

ADTR took a different route. They merged the saccharine pop-punk of New Found Glory, Yellowcard, Fall Out Boy, blink-182, and The Starting Line, with the streamlined heaviness of post-NWOAHM bands like August Burns Red, Parkway Drive, Blessthefall, A Skylit Drive, and Greeley Estates. With 40 minutes of music, Homesick had managed to bridge the gap between two competing subgenres at the height of Warped Tour’s commercial success.

Perhaps the best example of such bridge-building is the record’s third track, I’m Made of Wax, Larry, What Are You Made Of?, a straight-up metalcore song slapped with a chorus full of gooey, backgrounded 'whoa-ohs'. The type that sweaty, bouncing teens could latch onto and scream back with their hands stretched high. There’s a Warped Tour mosh-pit tour de force in the middle of it, featuring a scream-off between Mike Hranica’s screech and Jeremy’s thunderous bellow. But it quickly slips back into an uplifting stride before everyone’s had time to windmill.

The song’s music video demonstrated another important component to ADTR’s appeal: their image. The now-very-dated video saw the band facing off against a group of elementary school kids in a game of kickball, with Mike making his clever cameo as the umpire during a disputed call. However, unlike the visual accompaniments bands like The Devil Wears Prada and Underoath were releasing at the time, ADTR weren’t playing in creepy haunted buildings to create ominous vibes – they were playing fucking kickball, and presenting themselves as boyish mischief-makers, spiritual successors to blink-182.

Naturally, this irked metalcore purists who bemoaned any cross-pollination with the kids across the hall. The irony in that viewpoint is that by dressing like Zumiez employees while providing the soundtrack to a Hot Topic store, ADTR introduced people to metalcore who were otherwise turned off by “scary breakdown music”. A song like You Already Know What You Are wouldn’t sound out of place on a First Blood album, but it’s followed up with one of the record’s many, sappy pop-punk songs about life on the road.

Have Faith In Me and Homesick are the best of that bunch. They’re stadium-ready power-ballads with lyrics primed for use as high-school yearbook quotes. Except both of those songs feature Jeremy’s growls set behind their epic, nasally refrains, and the muscly guitar tones uphold the constant threat of a surprise pit-starter. Just enough bait to keep those with gauged ears from losing interest.

That specific dynamic had such a profound influence on the way pop-punk and metalcore would sound in the decade to come. The sleek production set the standard for how a metalcore guitar should resonate: crunchy and crisp, not jagged and super distorted a la Norma Jean or Every Time I Die. Adjacent to metalcore, ADTR created a power vacuum for a new wave of melodic hardcore bands to end up on Warped Tour. Stick To Your Guns, The Ghost Inside, Vanna, and eventually Beartooth, repackaged ADTR’s sensibilities into a traditionalist hardcore aesthetic – thus making hardcore (a genre that distanced itself from Warped Tour) accessible to kids who didn’t relate to the animosity of Hatebreed, and who didn’t have an older sibling to point them toward Terror or Comeback Kid.

On the pop-punk spectrum, bands like Neck Deep, The Story So Far, and State Champs slipped into the space ADTR created for a resurgence of aggressive, stage-divey pop-punk (which, in turn, became a sibling genre to hardcore in the 2010’s). “Defend Pop-Punk” bands like Man Overboard, Handguns, Such Gold and The Wonder Years weren’t necessarily influenced by ADTR, but their movement was bolstered by Homesick’s part in opening a pit for “rougher” pop-punk: a rootsier alternative to All Time Low and We The Kings, but with the same adolescent emotional appeals about hometown anxiety and relationships.

However, the most important effect Homesick had on rock music was its normalization of convention-breaking. They showed an entire generation of young musicians that fusing alternative genres was not only possible, but that it could be a successful methodology. ADTR weren’t the first to smash the old guard of rigid genre enforcements, but Homesick was an incredibly effective application of it—priming the pump for an emo-rapper like Lil Peep to blend two genres in a way that was formerly taboo. Even in heavy music, the kids who were introduced to metalcore through ADTR and eventually moved to hardcore weren’t turned off by the Turnstiles and Code Oranges of today: bands misunderstood by traditionalist hardcore fans, but lovingly embraced by the younger generation.

Alternative, underground rock music in the 2010s will be defined by its criss-crossing of genres and influences. From emo in indie rock and black metal in shoegaze, to pop in hardcore hip-hop and EDM in radio rock, music has become more globalized over the last decade as our world becomes more connected. In making an album about missing their home, A Day To Remember created a new one for so many others.