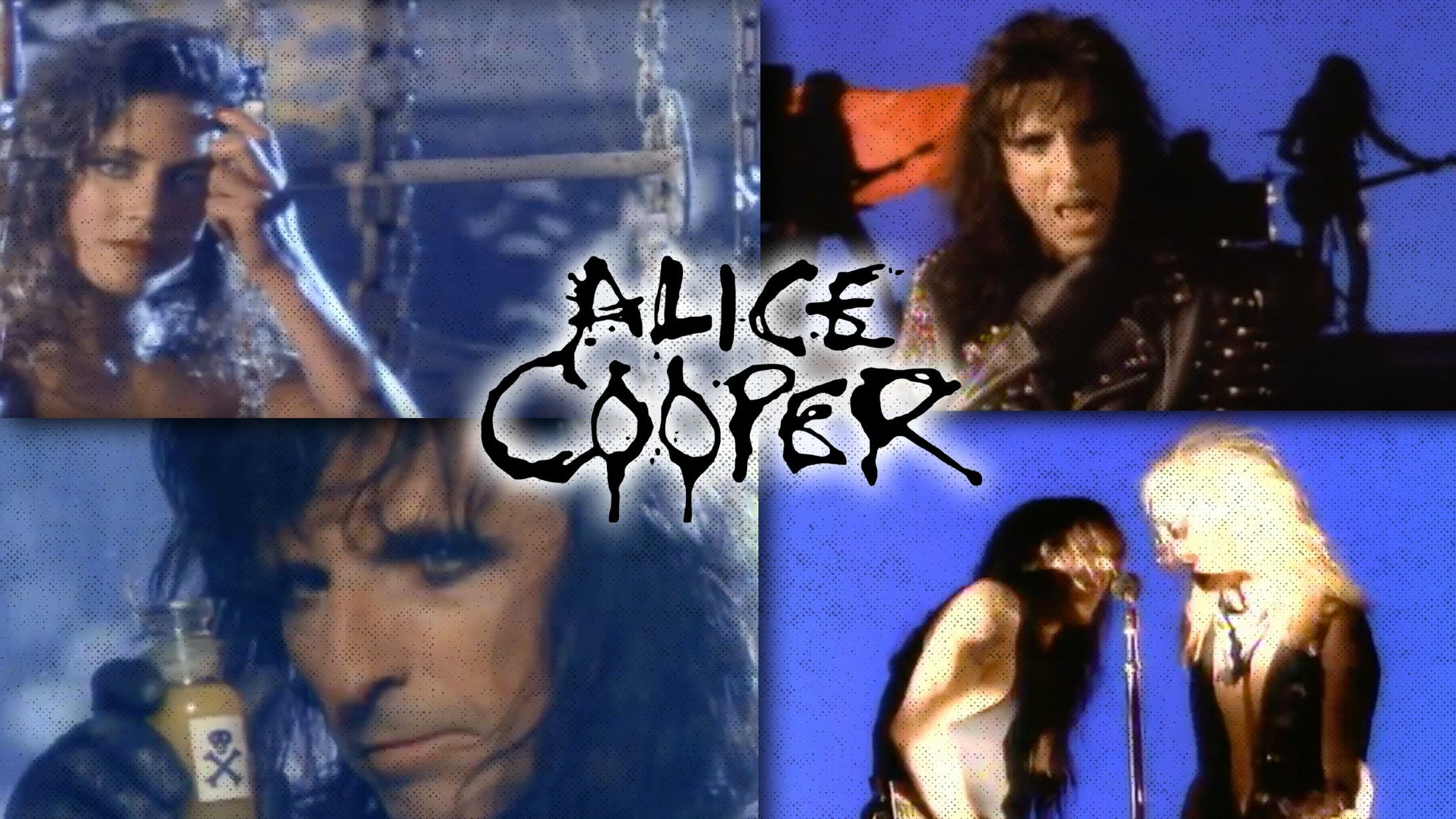 The bit in Wayne’s World where Wayne and Garth bow and scream that they aren’t worthy wouldn’t have worked with just anyone. It had to be an icon, a legend, someone who wasn’t just famous in 1993 when the film came out, but whose image was timeless and eternal. It had to be Alice Cooper really, a man who should really be the picture on the Wikipedia page for ‘rock star’.

Alice, a theatrical, insanely charismatic performer who terrified audiences with his shocking antics while being known off-stage as a really solid dude, has had some hits in his day. School’s Out, Welcome To My Nightmare, I’m Eighteen… Poison, though, captures him at his leather-gloved-fist-clenching best. Let’s dive on in!

0.02
A door swings open and there he is. Look, it’s Alice Cooper! Alice bloody Cooper, rock legend and contender for the most beloved man in rock. Born in Detroit in 1948 as Vincent Furnier, he originally fronted Alice Cooper the band, before changing his name to that of the band to ensure ownership of it. His onstage persona went through a few iterations – at first it was all about androgyny, then more violent imagery came in, then big mad on-stage theatrics like guillotine executions.

READ THIS: Alice Cooper was never the villain the world wanted him to be

0.18
The fun thing with blue screens is, you normally replace the blue with something else. Green screens are more popular than blue for the chroma key process due to blue clothes being more popular than green ones.

0.19
Smashing a topped cane against the ground like a fucking boss.

0.31
YEAH YOU CAUGHT IT. Good drumstick-catching there, the late Bobby Chouinard. Alice called Bobby one of the best musicians he’d ever worked with. The drummer sadly died in 1997, aged just 44.

0.40
Alice is 41 here. He pretty much looks the same today – looking old when quite young can work out well like that.

0.54
Okay, that’s his eyes this time. A little more weathered than the model’s ones.

1.05
That transition from 'I wanna touch you but my senses tell me to stop / I wanna kiss you' is an absolute killer if you sing this at karaoke and shout your fucking head off doing it – there’s no space for a breath. You’ve kind of got to try and inhale during the word ‘to’.

1.08
Alice does less freewheeling kissing than he’s singing about here – he has been happily married to Sheryl Goddard since 1976 (apart from a slight hiccup in 1983 when he was an alcoholic and she filed for divorce), and unlike a lot of his contemporaries, has remained strictly monogamous the whole time. When asked what the secret to a long successful marriage was, he has suggested regular date nights. He plays golf six times a week (and credits that for beating his alcoholism, replacing one addiction with another), so it’s not out of the question that, unless you also love golf, his dates are very, very boring.

1.24
The rest of the band is John McCurry, Hugh McDonald and Alan St. John. All guys with prefixed surnames. Interesting.

1.31
Bit of a Mad Max contraption there, fitting in with the whole sadomasochism vibe.

1.38
Where do you think he bought these chains? A chain store? There’s the beginnings of a joke there, because 'chain store' is an expression meaning a shop like Marks & Spencers or Tesco, where there are lots of them, and, oh you know what, let’s abandon it, it’s not going to work.

1.47
There were a few different versions of this video with different levels of risqueness. The model predominantly featured in this cut is Rana Kennedy, who is now a pilates instructor. While there are alternate versions of the video that feature toplessness, none of that is down to Rana – something she has had to take to the internet to correct people on. The internet doesn’t seem to know who the blonde-haired model seen earlier is, which seems a shame. Unless it’s also her, and there’s a wig involved, and you know what, that’s it, isn’t it?

2.00
'I wanna hurt you just to hear you screaming my name' is both a great line and a bad sentiment. Where are the songs about having sensible, consent-filled conversations about what both parties want from a sexual encounter, eh? Don’t hurt anyone unless they want you to.

2.07
Poison being fairly literally depicted there, but holy shit, if you drink that wine you’re a dumbass. There’s a Berocca-sized fizzing chunk of awful in it!

2.19
This video had the absolute hell played out of it on MTV, and is one of the archetypal hair-metal, video-vixen clips. This video was directed by the cheerily-named Nigel Dick, who is probably best known for directing Britney Spears’ megahit Hit Me Baby One More Time, but also made Welcome To The Jungle, Sweet Child O’ Mine and Paradise City for Gun N’Roses, and has worked with Nickelback a staggering 16 times, plus that shit one Chad Kroeger did with Josey Scott. He also directed S Club’s feature film, Seeing Double, and performed as a backing musician on Top Of The Pops four times with different acts.

2.40
Bit weird, this part – she’s pulling a rope, and then he’s moving towards her, but it’s not like the rope is tied round him or anything. Maybe he’s just pretending to walk and is standing on a skateboard out of frame, and that’s what she’s pulling? No, that seems unlikely.

READ THIS: A brief history of the world's greatest shock rockers

3.20
This nearly got to Number One in the UK, but was pipped to the top spot by Jive Bunny & The Mastermixers with Swing The Mood.

3.44
Someone should sort that leak out. Bloody landlords.

3.45
Alice is now, of course, trussed up on a big torture rack. His manager, Shep Gordon, is an interesting character. Mike Myers, who met him and Alice while shooting Wayne’s World, made a great documentary about him, Supermensch: The Legend of Shep Gordon, that has some awesome scenes of goofy publicity stunts he and Alice did. The outrageous persona and headline-grabbing antics made Alice a larger-than-life character, and it’s all really impressive from a marketing point of view, shocking people into buying millions of records.

4.01
The chair that smashes here 100 per cent isn’t the more ornate one seen in silhouette earlier. It looks like they used the fancy-schmancy one for the cool silhouette shots, then swapped in a shit-ass knackered one for the breaking it scene, and fair enough.

4.15
The big-eyed 'oh shit!' face she does here is excellent. But hang on, wasn’t it her that did the poisoning in the first place?

READ THIS: A deep dive into Tenacious D's Tribute video

4.16
And now here’s Alice with another, liquid-based poison. It’s fairly vague what’s actually going on here, but we’ve all had fun.

4.26
Well done, everyone. A big-ass banger about wanting to kiss a pretty lady but thinking you shouldn’t. Lovely stuff.