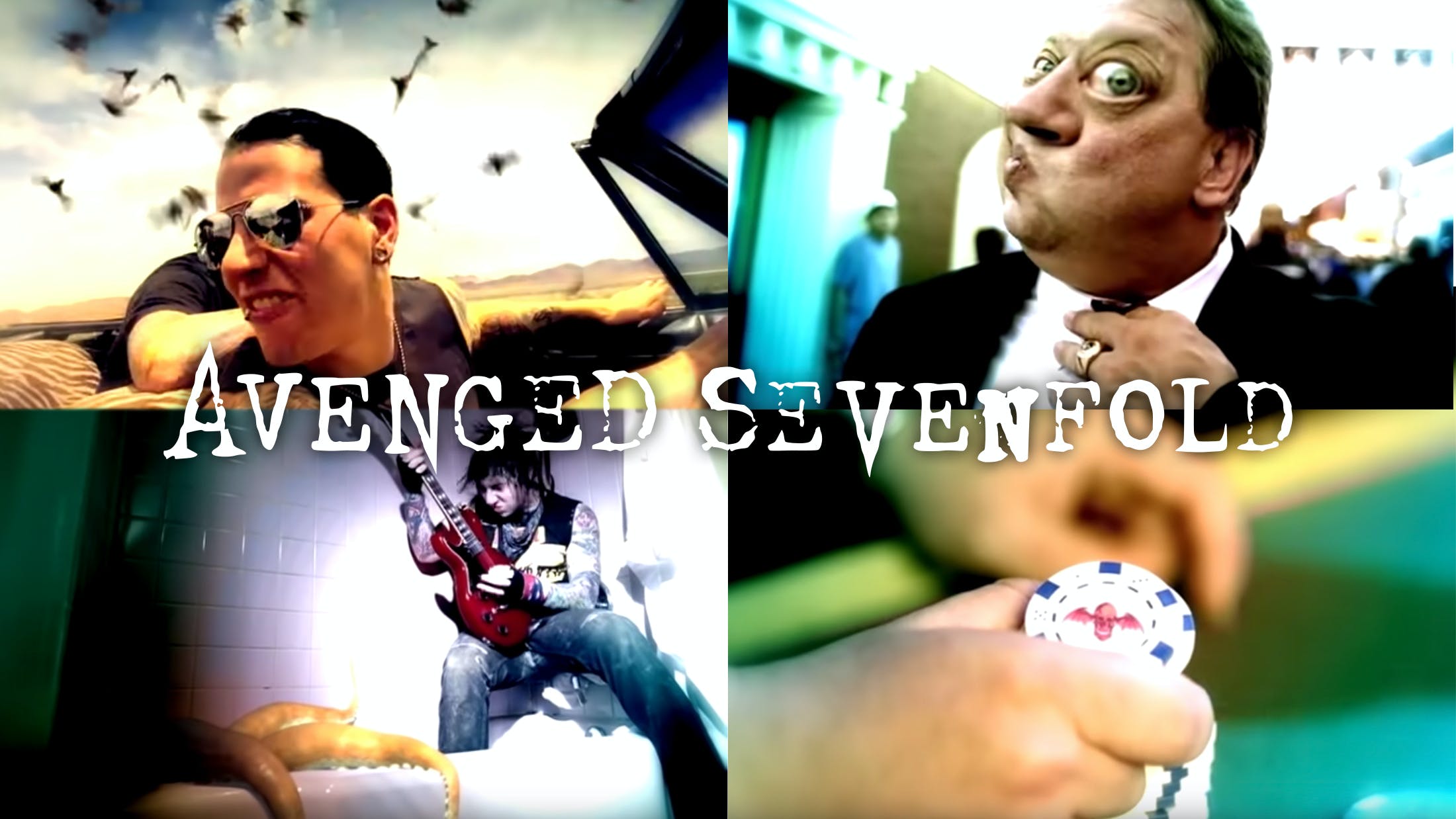 Booze! Drugs! Half-naked women! Zipping along desert highways in rad convertibles! While the Las Vegas Tourist Board probably aren’t huge fans of this video, it definitely makes being in Avenged Sevenfold look like a hell of a laugh. An exhausting laugh, sure, but a laugh nonetheless. Let’s dive on in!

0:01
We’re straight in with a roaring engine and a quote from Dr. Samuel Johnson (1709-1784), compiler of the first ever dictionary and general clever-clogs. The quote comes up in a collection of miscellaneous anecdotes (he was a pretty big deal), in which he is chatting with a blind friend about some drunkenness she witnessed the night before.

“I wonder what pleasure men take in making beasts of themselves!” she said. Samuel's reply was: “I wonder, Madam, that you have not penetration enough to see the strong inducement to this excess; for he who makes a beast of himself gets rid of the pain of being a man.” Other than it not exactly being a thigh-slapper, we know we’re about to hear a song about, er, getting fucked up. Avenged Sevenfold didn’t stumble across the line while researching their favourite lexicographer’s life, however – it is used as a preface to Hunter S. Thompsn’s Fear And Loathing In Las Vegas, both the book and movie of which are referenced extensively throughout this song and video (including the title).

0:07
M. Shadows there, aka Matt Sanders. The frontman co-founded the band in 1999 with guitarist Zacky Vengeance and drummer The Rev (more about both later) and another Matt: bassist Matt Wendt. Prior to starting A7X, he was in a punk band, Successful Failure.

0:16
There are so many nods to Fear And Loathing… in this video that pointing them all out would be genuinely tedious, but watching the film’s intro explains the flyswatter, the bats and the song’s title.

0:21
This is Johnny Christ, the last member of this line-up to join the band. Before becoming a fully-fledged member, he initially took some time off from high school to fill in on a tour. How the school felt about this is not known.

0:31
Shadows is singing here. Prior to this album, City Of Evil, he primarily screamed his vocals, but decided to switch things up by taking vocal lessons between records.

1:00
Boy, there sure are a lot of filters and special effects going on with this video! It was 2005, an exciting time for computer graphics.

1:05
Synyster Gates, there, hanging out with some of the friendly older citizens that flock to Las Vegas to gamble away lifetimes of earnings, one quarter at a time. Syn, also known as Brian Haner Jr, joined the band a few months into their existence, altering his original plan to become a session musician like his father. Haner Jr and Haner Sr have collaborated, with both Sr’s appearances on Avenged records and collaborating on, of all things, the theme tune to the comedy ventriloquism show The Jeff Dunham Show.

1:14
Binion’s Horseshoe has since been renamed as Binion's Gambling Hall and Hotel. Founder Benny Binion was quite a character, a convicted murderer and long-time criminal who ended up as an above-board casino magnate and founding the World Series Of Poker.

1:27
'Glitter Gulch' is a nickname for an area of Las Vegas’s Fremont Street.

2:05
On the drums is the late, missed, Jimmy 'The Rev' Sullivan, who died in 2009 at just 28. A founding member of the band, extraordinarily good drummer and talented multi-instrumentalist (providing vocals, piano and guitar on his side project with Syn Gates, Pinkly Smooth), he was tragically killed by combination of alcohol, medication and an undiagnosed heart condition. Following his death, one of his drumming heroes, Mike Portnoy of Dream Theater, stepped in for a while. Avenged’s current drummer is Brooks Wackerman, previously of Bad Religion and Suicidal Tendencies.

2:21
The Silver Slipper closed in 1988, but the sign was restored and can be seen on the side of Las Vegas Boulevard.

2:27
It’s flipping massive, but surprisingly easy to miss given everything else going on – look, it’s Synyster Gates’ shortened name Syn, spelled with colossal Vegas letters. Las Vegas is also known as Sin City, so, like, loads is happening.

2:34
Hey, it’s a Rodney Dangerfield impersonator! The beloved comedian died in 2004 after a long illness, and may well be a bit of a favourite of this video’s director. Marc Klasfeld also made the previously-dived-into video for Sum 41’s In Too Deep, which contains an extended homage to Rodney Dangerfield’s movie Back To School. Marc also made, among many others, Alien Ant Farm’s amazing Movies video.

2:54
There’s a bit in this section that sounds a bit like the solo in Gloria Gaynor’s I Will Survive, but that’s probably not deliberate.

3:28
You know what’s fun? M. Shadows and Synyster Gates are married to twin sisters, Valary and Michelle DiBenedetto, making them brothers in law, and their kids cousins. Here is a nice little chat with Syn about getting sad leaving his kids behind to go on tour. Awwwww.

3:32
That is, of course. Avenged Sevenfold’s logo, the Deathbat. The logo has not gone without controversy, with Overkill accusing Avenged of nicking it from them, to the point of selling T-shirts that say: 'GET YOUR OWN FUCKING LOGO'. In a way, both bands were beaten by over 800 years by the builders of Durham Cathedral.

3.:41
While M. Shadows is shown here gambling, the games most associated with Avenged Sevenfold take place on sofas rather than around tables – they have contributed songs to several Call Of Duty titles, made a cameo appearance at the end of one and Shadows himself is even a playable character in battle royale mode in one. He has also played Call Of Duty competitively.

3:45
Another musical act, albeit a pretty different one to Avenged Sevenfold, that really liked Fear And Loathing? The Weeknd, whose video for Heartless is also a big homage to the film.

3:48
A fish-headed croupier. There’s a fish called a garoupa. Does ‘garoupa’ sound anything like ‘croupier’? Probably not, eh. The ups and downs and shifting moods and tempos in this song are intended to evoke a sort of ooh-shit-drugs feel, which in concert with the trippy visuals it’s fair to say is a success – what a fucking exhausting four minutes!

4:08
That sign says 'Drive Carefully, Come Back Soon', which you can’t really goddamn see because of YouTube’s insistence on popping up links to other videos all over goddamn everything. But, you know who don't always drive carefully? Avenged flippin’ Sevenfold – Johnny Christ’s name was supposedly coined while driving hammered through a park.

4:10
There we go. A big, effects-laden, hedonistic, tongue-heavy epic from five dudes giving it their all, and the occasional extremely disconcerting lizard head. Lovely work everyone!