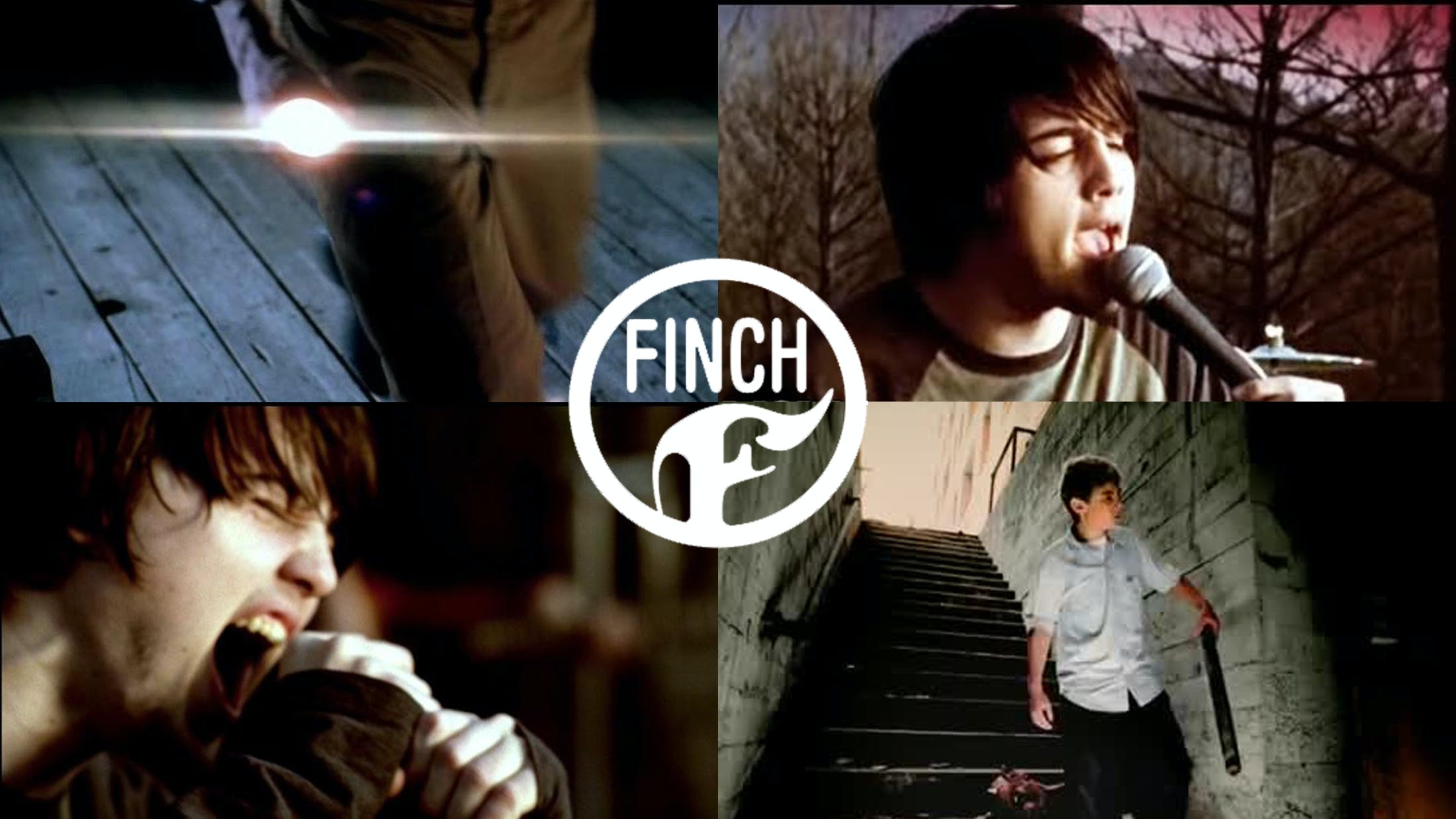 Others never quite hit that rhythm – whether due to creative differences, inspiration issues, problems with their labels, personal fallings-out or just life getting in the way. Finch, despite being around for 20 years, have only ever put out three records, a travesty when you look at how some of the bands influenced by them have ended up doing.

When their first, What It Is To Burn, dropped, it looked like they were going to be the biggest band in the world, thanks to this monster of a single – at once melodic and a massive racket, earnest yet raucous, with the world’s most singalonable chorus.

Let’s dive into it!

0.01
Finch, there, in a windowless room that looks like it makes up for in heating what it loses in professional-standard wiring.

0.05
Hey, look, it’s Finch vocalist Nate Barcalow, and with nobody else lit.

0.26
That is guitarists Alex 'Grizz' Linares and Randy Strohmeyer providing a lovely bit of screaming. Strohmeyer was the last of the original lineup to join the band – they previously existed under the name Numb, having formed in 1999 in Temecula, California (also home of Breaking Bad actor Dean Norris, fact fans). Strohmeyer had connections with Drive-Thru Records, and arranged a meeting, and the rest is extremely tumultuous history.

0.40
This is one of those songs where, if you mention Letters To You, people can’t necessarily place it, but if they hear the chorus they go, 'Oh, this one! Tuuuune!' The original demo was called I Want (Letters To You).

1.02
There are real Shallow Grave vibes from this creepy old bastard.

1.12
Drummer Alex Pappas has 'Project Mayhem' tattooed across his chest, also the name of a track from What It Is To Burn featuring Glassjaw’s Daryl Palumbo. Pappas left between that album and the 2005 followup Say Hello To Sunshine, but rejoined when the band reformed in 2012.

1.19
This is a proper health and safety nightmare. It’s amazing the band make it to the end of the video to be honest.

1.44
Bassist Derek Doherty got in a bit of trouble after Finch’s first breakup in 2006. He was working in the real estate industry and became part of a scheme defrauding clients, taking fees for audits that never took place. He ended up being convicted of fraud, sentenced to 15 months in prison and ordered to pay back almost £100,000 dollars. He was replaced by Daniel Wonacott.

1.51
Nice bit of horseplay there. Relationships within the band have been very up and down, with Barcalow quitting on three separate occasions and some quite public bad blood. Personal and creative differences seem to be what is responsible for how few albums they put out, with a bunch of music being scrapped or unofficially released.

2.13
This is the second video made for Letters To You. The first one seems to not be on the internet at all, which Finch are probably fairly happy about, with Doherty calling it “atrocious" and Linares deeming it "basically a piece of shit." This one was shot in April 2002 in Hollywood, primarily in the basement of a hostel, and debuted on music channels that May. It was directed by Drive Thru Records co-founder Richard Reines and Brad Scott.

2.23
There’s a fucking great live version of this on their 2014 live album What It Is To Burn X Live, from a 2012 tenth-anniversary show where they played their breakthrough album in full. Handily, it’s also on YouTube.

The tenth anniversary prompted a reunion. Some of the band were initially reluctant, with guitarist Grizz Linares saying “I was like, 'I don't know, it's a lot of trouble for one show. But alright, I'll do it for two shows! Let's do a California show, and let's do a London show. I want to go on vacation to England one more time!'” They played two California dates and came to these shores to play Brixton Academy. Then, before they knew it, they were on tour and active as a band again, and 2014 saw their third and, as of this writing, final album. Even given mini-reunions like in 2018, and occasional bursts of activity on social media, the future of the band seems to always remain up in the air, with every member busy with their own projects – Pappas, Linares and Wonacott are in a band, Speak The Truth Even If Your Voice Shakes, with Senses Fail frontman Buddy Nielsen, and Barcalow is in electro group Private Lives.

2.53
Ah, cool, the scariest clown painting ever made. Hey, you know what’s a shame? There are websites saying you can buy tickets to see Finch – this band, Finch – in Australia in 2020, but it’s the wrong fucking band. 1970s Aussie rock act Finch have re-formed, and are potentially going to find themselves playing to some very underwhelmed post-hardcore fans.

3.16
Honestly, no idea what the whole 'boy investigating stuff, creepy man, band in basement, see-through mask' thing has been about.

3.20
Everyone looks, justifiably, fucking knackered. All that thrashing about, roughhousing and instrument-smashing while surrounded by radiators would tucker anyone out. Lovely work everyone.