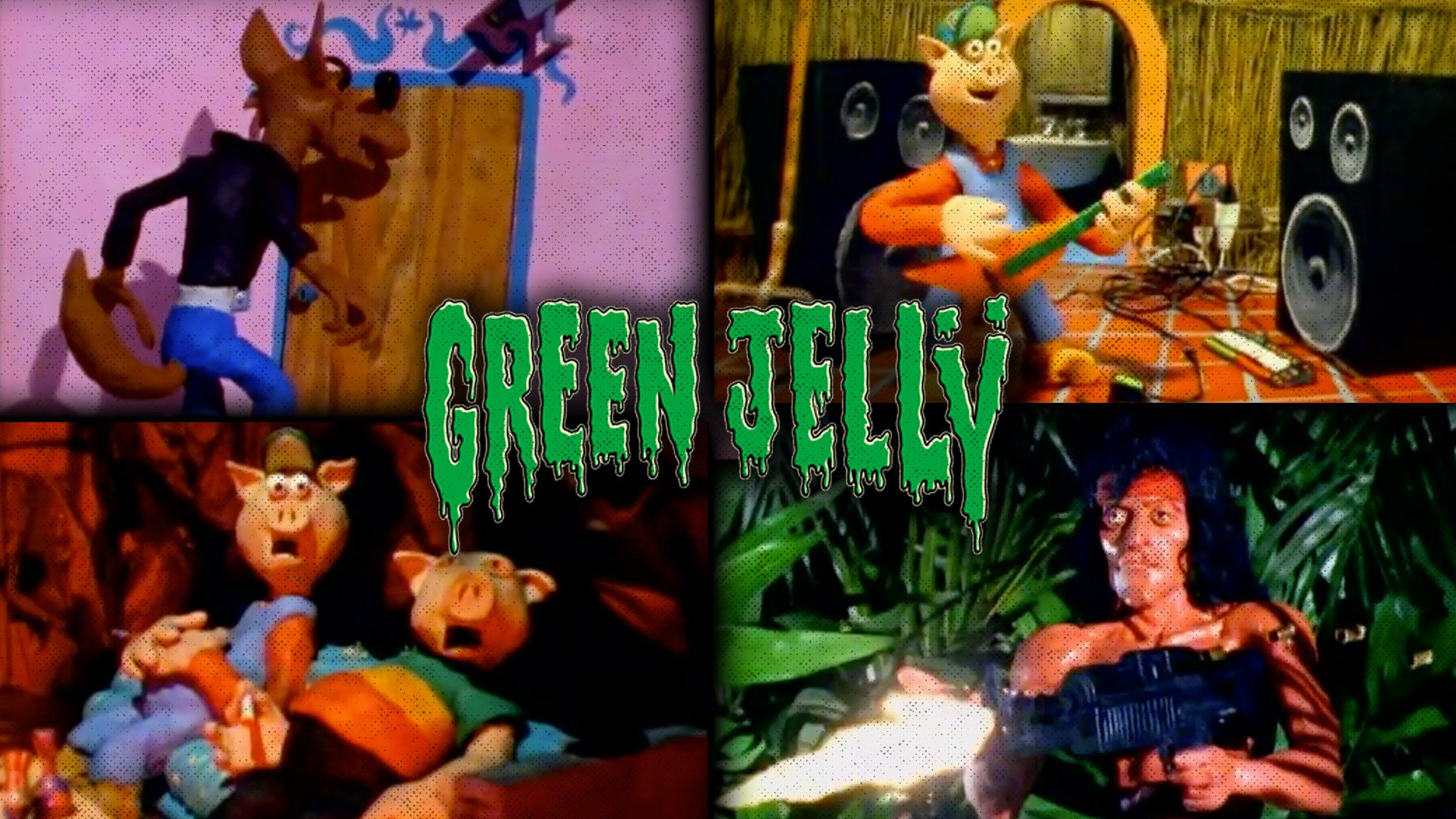 Sit right back for an ancient fable reinterpreted as a fat-riffed, heavily-umlauted claymation classic as, the tale of the Three Little Pigs is filtered through the violent, deeply silly imagination of comedy metal giants Green Jellÿ. Plus, the singer of 2019’s biggest band is on it. Honest!

Let’s dive on in!

0.03
Jello or Jellÿ? The band began as Green Jello, before a lawsuit from Kraft Foods forced them to change their name. They changed it to Green Jellÿ, insisting that the umlaut over the Y meant it was pronounced like an O. The mantra “Green Jellÿ sucks” is something they’ve always encouraged the chanting of at shows, also proclaiming themselves “the worst band in the world”.

0.14
The animation quality gets a lot better when the stop-motion stuff comes in, honest.

0.32
Heyoooo, there’s the Big Bad Wolf and the beginning of the proper video. Director Fred Stuhr also made the stop-motion videos for Tool’s Sober and Prison Sex, and Sepultura’s Ratamahatta. He tragically died at the age of 30 in a car accident.

0.50
Vocalist Bill Manspeaker is the one consistent member of Green Jellÿ, there since forming it in 1981. He’s occasionally credited under aliases like Bill the Landlord or, more often, Moronic Dictator.

1.02
The band aren’t seen in the video at all, not even in claymation form. That makes sense though, as claymation takes a while, and there would be very little chance that the lineup would be the same at the end of the animation process as at the beginning. Amazingly, close to 1,000 people have been members of Green Jellÿ over the years – some for just a show or two, some for decades. Bill Manspeaker has expanded Green Jellÿ into a “franchise band”, where he arranges different groups of local musicians all around the U.S., flies in for a few shows and flies out again. He’s got it down to a fine art, flying out every Thursday and back every Monday, a different state every week. “Facebook is basically my job,” he told the Santa Maria Sun.

1.19
The line 'Not by the hair of my chinny chin chin' features the vocal talents of none other than Maynard James Keenan, of Tool fame. “This was his first gold record,” said Manspeaker on a podcast earlier this year. “The guy who sings in the greatest band in the world also sings in the worst band in the world.” Manspeaker was a really important figure in terms of Tool getting together – drummer Danny Carey was in Green Jellÿ for a fair while (and drums on this track), Maynard James Keenan lived with Manspeaker, and it was him that introduced Keenan and Adam Jones to one another. Rosetta Stoned, from Tool’s album 10,000 Days, is about an adventure Manspeaker had that may or may not have involved getting abducted by aliens shortly after taking a lot of drugs. Cereal Killer Soundtrack, the album Three Little Pigs is on, gives Maynard a shout-out in the closing track, Green Jellÿ Theme Song – in between choruses of “Green Jellÿ sucks!” Maynard is named as being “insane”.

1.45
There’s a reasonable amount of reused animation in this video – a lot of the clips of the wolf are recycled six or seven times – but if it ain’t broke, you know?

2.12
'Cranking up a Marley' is one of those expressions that doesn’t actually exist and yet everyone immediately understands. Excellent.

2.15
Harley-Davidson are about the only company Green Jellÿ ever mentioned in a song that didn’t try to sue them. As well as the Kraft-enforced name change, they got sued by Kelloggs for lampooning their character Toucan Sam (from the Froot Loops box) as Toucan Son Of Sam, a reference to a serial killer from the 1970s. Then Metallica sued them for lifting a riff from Enter Sandman, and Hanna-Barbera got annoyed after they put Flintstones references into an Anarchy in The UK cover.

2.55
'His daddy was a rock star, named Pig Nugent' is, as well as being very silly, a reference to Ted Nugent, southern rock pioneer / gun nut.

2.59
'Harvard College' isn’t actually the name of an institution, but nothing rhymes with Harvard University.

3.03
That mansion is cool as shit. Well done, Fred Stuhr.

3.20
In some places on the internet there are claims that, while Keenan voices one pig, the other two are voiced by Pauly Shore and Les Claypool. That seems like it might not be true.

3.49
'Hmm', you might be thinking, 'Does this song work without the video?' For a deeply silly band, Green Jellÿ were also pioneers of a sort. Three Little Pigs was the first single to ever be released only in VHS form. There was no CD available for a year or so after the song debuted on MTV, just a giant plastic tape. The VHS is really hard to find now, but then so are VHS players, so it’s all good really. And it does work, so there.

4.07
The phrase 'nine eleven' has a different meaning now, of course, but here is merely a reference to 911, the U.S. emergency services number.

4.11
That is an extremely good claymation likeness of Sylvester Stallone as John Rambo. Stallone’s asymmetrical features and occasional slurred speech stem from paralysis in his face caused at birth by a forceps delivery. The fifth Rambo film is coming out this year.

4.41
In these few seconds of blurry footage, we can see some of what Green Jellÿ live shows look like – lots of oversized puppet heads and extremely silly costumes.

5.47
A lovely moral ending, and a great time had by all. Green Jellÿ… don’t actually suck?