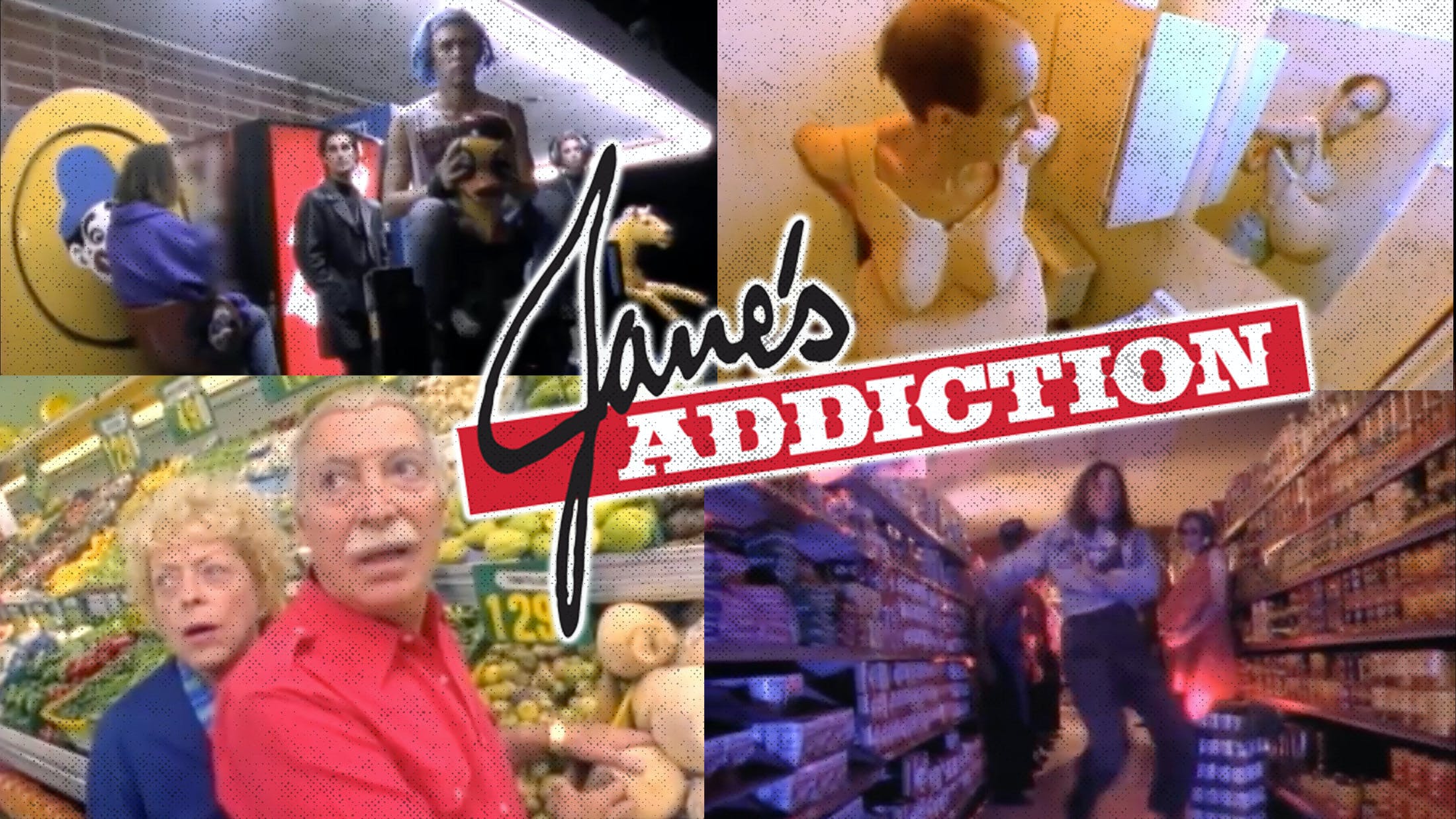 Heroin is a hell of a drug, and Jane’s Addiction really, really liked heroin. Not all of them – the drummer stayed off it – but three out of four of them really got heavily into heroin. Miraculously, considering how many of their contemporaries in the early '90s alternative music world ended up dead, they all made it, but the band didn’t.

At their peak, in 1991, they split up – drugs, madness, egos and partying took their toll and they called it a day. If they hadn’t, the '90s rock world could have looked very different – so many bands were influenced by Jane’s Addiction that it’s hard to wonder what might have happened if they’d stuck around.

That’s all in the future though. Right now it’s 1990 and an LA supermarket doesn’t know what’s about to hit it… Let’s dive on in.

Dave Navarro has looked extremely different over the course of his career. These days he’s the impeccably-groomed host of a tattoo show, with millimetre-perfect facial hair and flawless eyeliner, but in the early Jane’s Addiction days it was all scruffy dreadlocks and loads of drugs.

A shot of the band sat unenthusiastically on these rides was on the front of the single.

Here’s the star of the video, whose identity has sadly been lost to time (or would take more research than we have been able to do).

That barking is Farrell’s dog Annie. "I'd got her from a dog shelter and she was quite needy, so I brought her down to the studio that day rather than leave her at home,” Farrell later recalled. “I'm singing in the booth with the headphones on and Annie gets all excited and starts going, 'Ruff! Ruff! Ruff!' The fact that she ended up on the track was just pure coincidence."

That is a pro-level grimace from the security guard.

Perry Farrell with a bank robber-esque stocking on his head, there. Farrell has also had a lot of looks over his career – this is the pre-neckerchief days, the pre-three-piece-suit days, the pre-looking-a-bit-like-Dot-Cotton-off-EastEnders days.

This was filmed on location in Royal Market, a supermarket on Washington Boulevard in LA. Not long after this video came out, it was demolished and replaced by a 99-cent store.

This is not the only foodstuff that gets shoved up a dress in this video.

Security cameras were still fairly newly common in 1990 – the price of them had dropped dramatically in the late ‘80s – which must have been a real buzzkill for shoplifters. Farrell claims the song is autobiographical, and that stealing is just one of the many vices he enjoys.

Eric Avery doing some half-inching. The bassist was the only member of the original lineup not to rejoin Jane’s Addiction when they reformed, with a drunken incident involving one of Farrell’s ex-girlfriends thought to be part of why.

The pineapple-up-the-dress moment is what this video is all about really, so let’s talk about the director. This video was directed by Casey Niccoli, an extremely important figure in the Jane’s Addiction story. Born in Bakersfield, California and named after Yankee skipper Casey Stengel, she was the girlfriend and muse of Perry Farrell for a while, and appears in sculpted form on the cover of Nothing’s Shocking (as an on-fire pair of nude Siamese twins) and Ritual De La Habitual (as part of a threesome also involving Farrell). Niccoli has also been credited with nailing the band’s early onstage visual aesthetic and use of Santerian and Catholic imagery. She also appears in the documentary Soul Kiss and the video for Classic Girl (a song inspired by Farrell’s nickname for her), in footage from the docudrama Gift that Niccoli and Farrell co-directed.

The stockings-on-head thing is distressing as fuck, isn’t it?

It’s all making sense now. The dude has a fake pregnant tummy and uses it to shoplift. Fun!

Even at their peak, Jane’s Addiction were a polarising band. Rolling Stone put it this way: “The band is great and full of shit - often at the same time.”

We can’t find this performer’s name anywhere online. Jane’s Addiction continue to feature pole dancers in their live shows though.

Textbook “shocked bystanders” there. Excellent. Niccoli all but vanished from the music industry when her relationship with Farrell dissolved. According to a YouTube comment thread – so it might be complete nonsense – she is now living happily in the Mojave desert, drug-free and raising a family. Her daughter Poppy Jean Crawford is a musician.

No idea who this is either. People in the '90s just didn’t put enough material online, you know? The blame lies somewhere between the rudimentary nature of early internet technology and the fact everyone was out of their nuts on smack.

Whoa! Mere seconds after that lady did a bum-dance, here’s another bum-dance!

It was Perry Farrell’s bum!

If an elderly man doing a kind of Charleston down a disco-lit supermarket aisle isn't entertainment, then what is? THEN WHAT IS?

In these joyous-sounding moments, it’s odd to think that when Jane’s Addiction were recording this album, they pretty much hated one another. Only on one song were the whole band in the studio at the same time: Three Days, a sprawling track about the 72-hour heroin sex binge Farrell and Niccoli had with an ex of Farrell’s, Xiola Blue. This was immortalised in the cover art after Blue died of a heroin overdose shortly afterwards.

The band hanging out shirtless, something they were all reasonably keen on – three of the four of them have at least one bare-torsoed image on their Wikipedia pages. Farrell and Navarro in particular seemed to go for decades at a time between shirts.

During these bits of band choreography, it’s fun to think how many goes it probably took. Remember how much heroin was going around? If there’s one thing heroin fucks with (and there isn’t one, there are loads), it’s the ability to perform choreographed routines.

If you briefly thought, “Oh my goodness, it’s a gentleman’s nut sack” you are not alone. It’s just a fake arse.

That’s the most “This would be the worst possible time for my phone to freeze if I were watching this on a bus” shot in the whole video.

Farrell does a great job of mustering his ridiculous rock star charisma even through a stocking. His voice is reverbed to hell on the album, something they replicated live as well, as seen in this surprisingly great quality live version from 1990.

What a joyous ending, a big celebration of disguising yourself as a pregnant woman in order to shoplift. Massive laugh. When this won the MTV Video Music Award for Best Alternative Video, unimpressed awards presenter Billy Idol announced it as “Been Caught Wanking”, pretending the spaceman statue was his penis for a while. Only Niccoli and Navarro were there – Farrell was smoking crack – and both were extremely un-sober, and during Niccoli’s speech (“garbled” – The Guardian), Navarro tried clumsily to kiss her. Three months after receiving the VMA, the band split up. Their farewell tour was Lollapalooza, founded by Farrell and still going as an annual event.

So, madly, are the band – they reformed first from 2001-4, and again in 2008, after which, despite a few problems and line-up changes they’ve never definitively split up. Nearly thirty years after pratting about in a supermarket