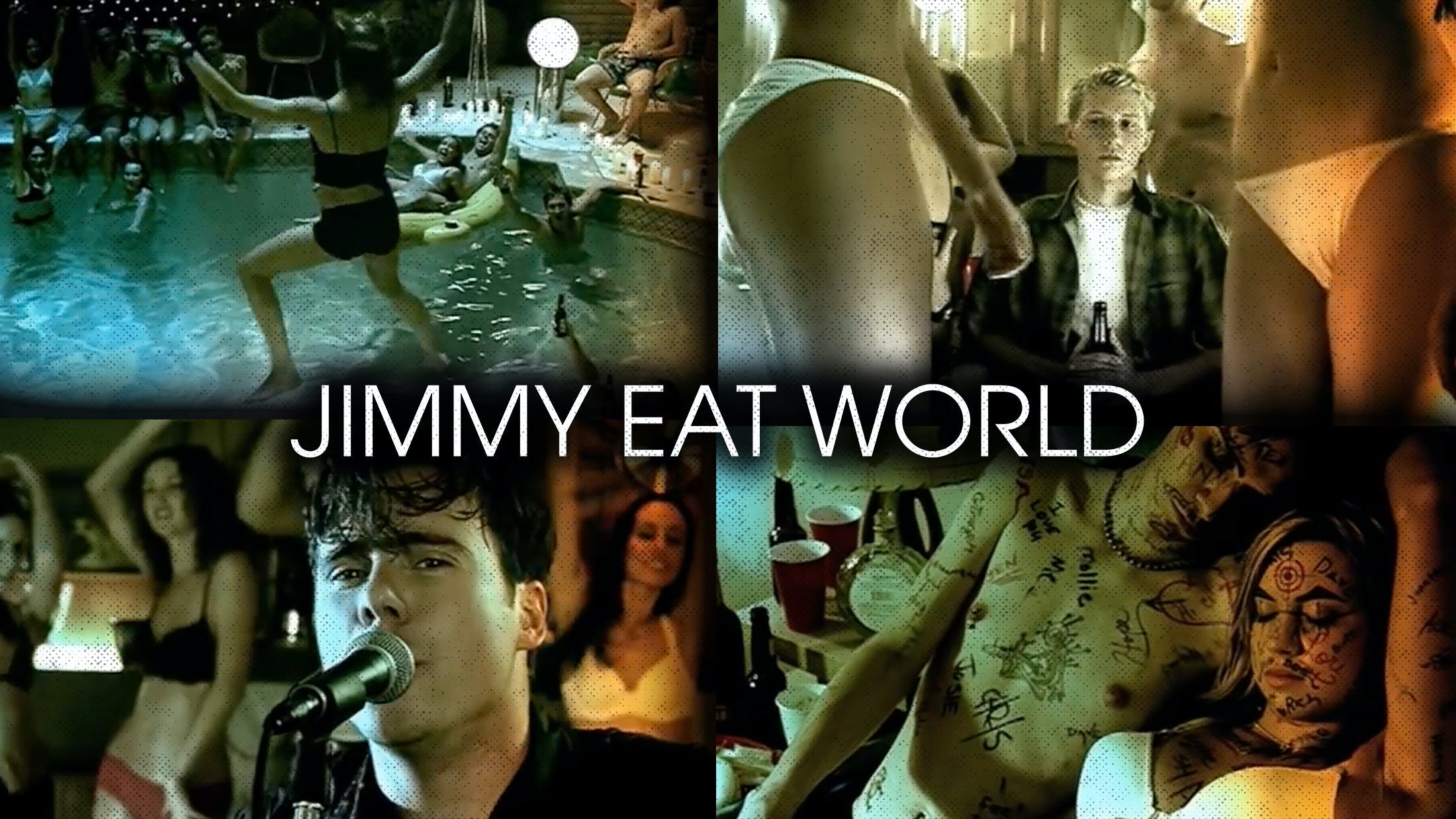 The dream, in anything, is to have your cake and eat it too, and Jimmy Eat World’s The Middle video absolutely manages to do exactly that. How does it do that? By telling an emotive, all-too-relatable tale of feeling isolated, but telling it via the medium of people dancing in their underwear.

The song would have been a big hit anyway – something which, unfortunately, tragedy had something to do with, as we’ll soon see – and was just as huge a success on radio, so it’s not like it’s all about the flesh on show. And, it’s a great, stirring, massive banger of a song, an upbeat pop-punk anthem about keeping on going in the face of adversity..

But, you know, it’s also got loads of good-looking people in their undercrackers. Cake both devoured and retained. So, like the woman at 1:44, let’s dive in!

0.19
The nature of this party immediately raises some questions. At least some of the guests have driven here (including the woman we followed in), but if they’re all in their pants, where are their keys? Plus, even back in ancient-ass 2001, some people had mobile phones, mostly fairly chunky Nokias. See, clothes aren’t just to hide your junk – they’re also to carry your shit!

0.27
It’s kind of weird that a song with lyrics as straight-down-the-line as 'Just do your best' became such a hit, but part of the success of this song has to come down to timing. Released as a single in November 2001, the optimism and upbeat nature of it, the you-got-this attitude, struck a chord with millions of people while the world was still reeling from 9/11. In a retrospective piece, The A.V. Club’s Jason Heller examined how he went from seeing the song as a pale imitation of what Jimmy Eat World once were to an emotional masterpiece. “Viewed through the horrific lens of the attack’s aftermath, the lyrics of The Middle aren’t cheesy at all. Okay, so maybe they’re still the cheesiest thing ever written, but sometimes cheese is called for.”

0.29
Oh no, this guy’s wearing clothes! What a dork! This guy is played by an actor named Josh Keleher, who is now a service technician for Boeing. From Jimmy Eat World to Joshy Fix Plane. Right? Right?

0.35
The album this came off was originally called Bleed American. However, following the horrendous events of September 11, 2001 (seven weeks after the album’s release), the band and record label decided the title could upset people, so subsequent printings were released as Jimmy Eat World. The worry was that it could sound like a threat, i.e. 'Bleed, American'. The lead single, preceding this one, came out before 9/11 in the States and was released as Bleed American, but after 9/11 in the UK, where it was renamed Salt Sweat Sugar. Hey, it’s all confusing!

0.46
This video, of course, features a lot of barely-clothed and sweaty people, something which could easily take it into an area that the band wouldn’t have been comfortable with. The concept came from director Paul Fedor, and the band weren’t immediately convinced, concerned it could come across as a bit leery and lascivious. "It was a leap of trust to work with him," Adkins told Billboard. “He tastefully told the story a little bit on the edge. But it could've gone really bad. We just had to trust him and it worked out."

0.49
Among the names written on these hard-partiers are Sky, Mollie, Lisa, Anna and Dave.

1.01
Part of the genesis of this song was the situation Jimmy Eat World found themselves in after being dropped by their label. Their previous album hadn’t sold particularly well, but they felt they had what it took and would do what they had to to keep going. They took on day jobs and financed the album themselves, and this we’ll-get-there spirit helped them through it, a band not ready to be written off yet.

1.38
It’s a silly name, isn’t it, Jimmy Eat World? The origins of it are arguably even sillier – despite the frontman of the band being named Jim, it’s nothing to do with him. Guitarist Tom Linton took it from a drawing one of his younger brothers did. Here’s how Linton described it in 1999: “My brother Jim beat up my younger brother Ed, and Jim ran into his room and locked his door, and Ed drew this picture that said 'Jimmy Eat World', and it was a picture of him eating the world. My brother Jim is kind of a big guy. A stupid name.”

1.53
Aw, dude. That awkward, not-part-of-anything feeling is a bit too relatable. Someone who related to it, and is a massive fan of this song is Taylor Swift, who told Rolling Stone "I felt comforted by it, because I never felt like I really fit perfectly into any clique at school.” She later performed it in an Apple commercial, and brought Adkins out on stage with her.

2.10
Poor fella, obscured by gyrating crotches. This video’s director, Paul Fedor, has also worked with Marilyn Manson, 30 Seconds To Mars, Alice in Chains and Deftones. He is also a visual effects artist, and has worked on some massive films including The Fate Of The Furious, Captain America: The Winter Soldier and Pacific Rim, as well as an obscure TV show called Game Of Thrones. There were a lot of gyrating crotches in that one as well, if memory serves.

2.12
Eagle-eyed viewers will notice that the guy in the red boxers has another pair of underpants on underneath it – you can just see the edge of the strap peeking out of the top. That was probably a good idea, given what can easily happen when dancing in a loose boxer. The proximity of so many half-naked people can have other unfortunate side-effects too. Supposedly one of the male extras got a little overexcited, with Adkins saying: "He was having a hard time in the heat hanging out with a bunch of scantily-clad ladies."

2.25
The sweat is real, both from going for it and the video being shot on an extremely warm day. “It did feel like a party when we were shooting the mimed performance, a crazy-ass party, dancing in a crowd with people all around,” said Adkins. “Insane! It was awkward for people at first, but after the first hour it became this normalised thing and people were just kicking it. It was kind of hot that day, too.”

2.30
Our hero can’t take it anymore, and despite his discomfort doing so, is disrobing to fit in with everyone else. No! Don’t do it! Just be yourself, dude – you don’t need to conform.

2.38
Hang on, what? There’s a girl over there doing the same thing. What a stroke of luck!

2.41
If you’re watching this on YouTube, at this point it becomes completely obscured by stuff, which is a shame, as it’s a happy ending – the pair of them pull their clothes back on, because to hell with conforming if it means being who you aren’t, and they leave the party together with their hands in each other’s back pockets.

2.53
So there we go. Heartfelt emotive masterpiece or three minutes of pervery with a nice soundtrack? Or neither, or both? This Victoria sponge has been swallowed, yet persists.

Jimmy Eat World have shared their new single Place Your Debts, with Jim Adkins explaining that, “The ‘debt’ you rack up is the time you spend avoiding doing the work to know yourself…”

Ahead of their UK and European tour dates this summer, Jimmy Eat World have kickstarted their next era with new single Something Loud.