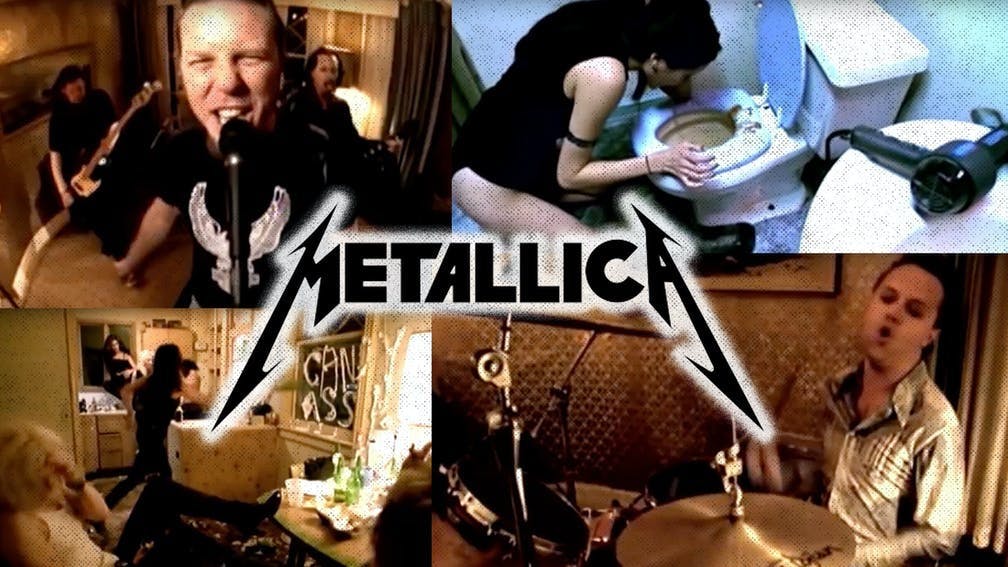 Hey guys, have you ever heard of this super good band Metallica? They’re definitely going places.

One of the places they’re going, in fact, is here, the United Kingdom – they’re playing both Manchester and London next week, and both of those shows, due to the fact that they are goddamn METALLICA, will be just the fucking best.

To get excited for that, why don’t we all have a bit of a drink and jump back to the slightly more problematic times of the late 1990s for a big ol’ drinking anthem, an Irish-American classic, a cover of a cover, Whiskey In The Jar.

Dropped in time for St Patrick’s Day 1999, coming off the all-covers compilation Garage Inc., Metallica's rendition of Whiskey In The Jar is a big singalong banger that went down a storm in Ireland last week, when they played it at Slane Castle and dedicated it to Thin Lizzy.

Let’s jump on in…

It’s a big ol’ American house party. This particular house is in Brooklyn, filmed in June 1998.

Hey, we know that tongue! That’s James flippin’ Hetfield, 35 at this point, in one of his many excellent facial-hair phases and in the prime of life.

Daddle-a-na-na-na-nana! That’s… that’s old, isn’t it? It is! Whiskey In The Jar is originally an old Irish folk song, thought to have been written in the 17th century. Folk groups The Dubliners and The Highwaymen re-popularised it in the 20th century, and then Thin Lizzy (fronted by the late, great Phil Lynott, whose mother sadly died this week) recorded a version of it in 1973. There were other versions in between that one and this one – the Dubliners did a more punked-up version working with the Pogues in 1990 – but Metallica’s version is to all intents and purposes a cover of Thin Lizzy’s. Here is Thin Lizzy. Eric Bell’s top is, well, it’s something else.

Not a lot of dudes at this party, are there? Other than Metallica, of course.

James Hetfield’s guitar is a lot to take in. It’s an ESP JH-1 Flying V in green flames.

0.25 And more! This video is wall-to-wall drinking and smoking. There’s actually, kind of, not that much more going on in it. It’s the work of director Jonas Åkerlund, who used to be in pioneering Swedish black metal band Bathory before moving into directing. His videos include the Prodigy’s Smack My Bitch Up, Madonna’s Ray Of Light, Rammstein’s Pussy and Telephone by Lady Gaga and Beyoncé.

Cork and Kerry are both in Ireland, of course, and both James Hetfield and Kirk Hammett have Irish ancestry.

Oh look, it’s Jason Newsted, who played bass with Metallica from 1986 to 2001. He now paints, and has exhibited his art all over the United States. There was some bad blood after his quitting the band to concentrate on his other project Echobrain, but everyone has reconciled now, and he and current bassist Robert Trujillo have even shared the stage on several occasions.

A rapier is a thin sword.

The four members of Metallica are dressed for completely different parties. Is Lars Ulrich’s silvery button-up shirt a sight homage to Eric Bell’s top in the earlier Thin Lizzy video? Possibly, but he’s also Lars Ulrich so he just dresses like that.

Shirts are coming off. Good lord.

Kirk Hammett, in his smart leather jacket and occasional cigar, is done up much more like he’s on a stag do to Vegas than a fuck-shit-up house party.

Hammett seems to only have the cigar when he also has his glasses on. A homage to Groucho Marx? Perhaps.

The official spelling of this line is ‘Musha ring dum a doo dum a da’.

Newsted is dressed like he was on his way to his friend’s house to play Tony Hawk’s Pro Skater and accidentally knocked on the wrong door and ended up here.

The sleeve for Whiskey in The Jar was a bit of a fuck you to critics, featuring a collage of articles slagging off the band’s decision to include the cover at all.

Ah, a cigarette to get rid of the barf taste.

Now she’s going to the toilet! Everything happens in this video.

A location change, and James and the boys are now in a red room with a leopard-print carpet.

As stuff to have drawn all over you in felt tip while you’re drunk go, this woman has got off lightly. A few stars on her tummy and that’s it.

TVs used to be massive. A CRT TV like this in 1997 not only weighed about nine times what a comparable telly now does, they cost more per square inch. The past was crap.

Ah, right, it’s just another room in the house. What’s that room generally used for, then, if not music videos?

Someone has written “CANDY ASS” on the window, which is quite gentle really.

There’s a Jason Voorhees mask on the wall, possibly a tiny nod to Kirk Hammett’s love of horror films. Hammett loves the genre so much he wrote a book about it.

Obviously the most dated element of this video is the leering “ooh, women kissing in their pants” nature of it – endless unnamed barely-clad women as far as the eye can see – but in these broke, environmentally-aware times, there’s also something about the sheer wanton waste that feels really decadent. Don’t break all that stuff! Recycle it, Freecycle it, upcycle it!

4.31 There we go. Big tune, not the greatest video ever made but it’s still Metallica, you know? It’s easy to think, ‘Wow, there must have been some crazy stuff going on behind the scenes!’ but according to Metallica’s own photo archive, no there wasn’t.