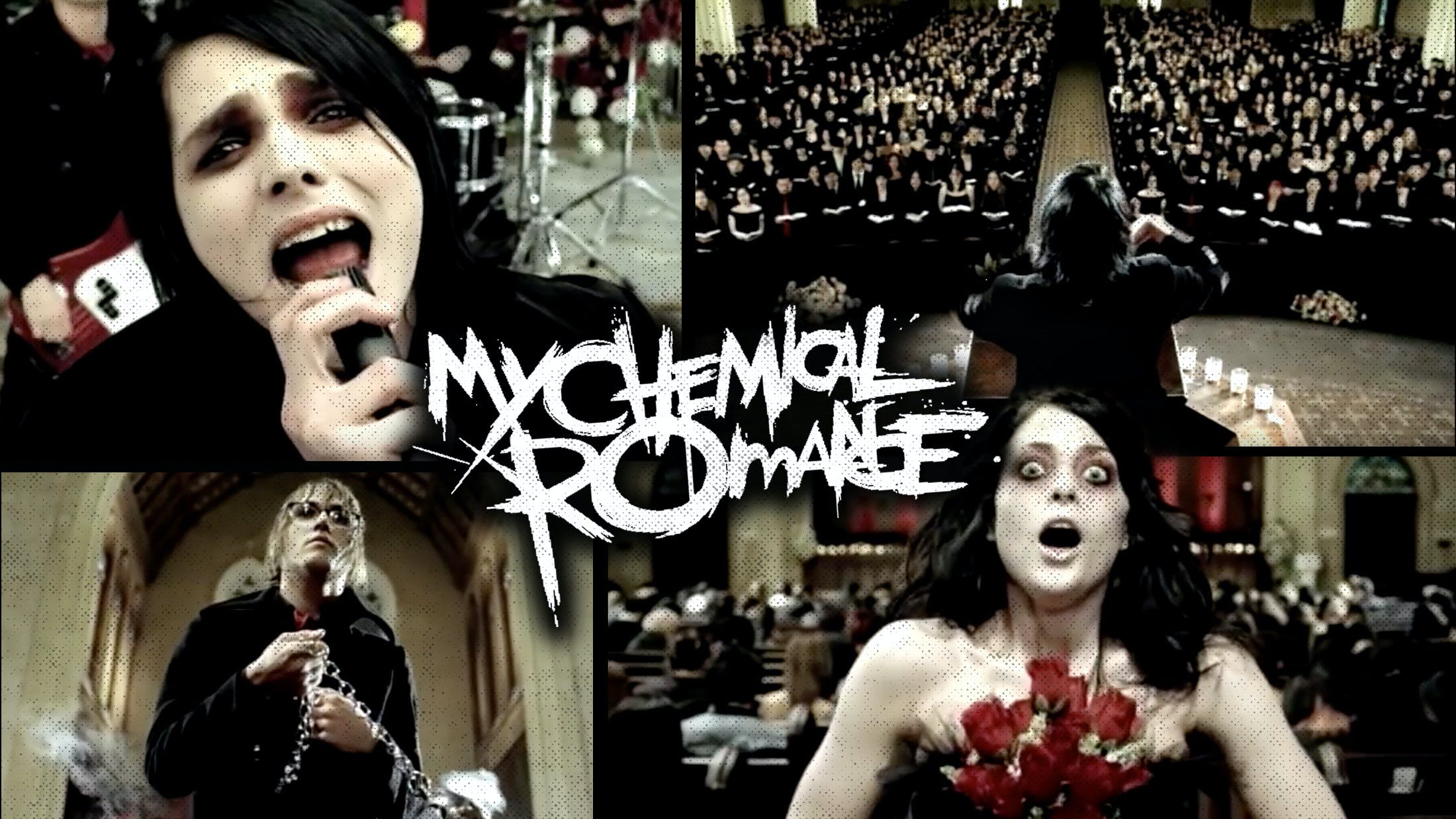 One day into the shoot for My Chemical Romance’s Helena video, director Marc Webb declared that it might be the best video of all time. Whether it is or isn’t, it’s certainly a pretty ace one. It won the the Best Video Award at the 2005 Kerrang! Awards, was ranked #17 on Billboard's list of the best music videos since 2000, and persuaded a shitload of kids to buy ties. A crossover hit that helped the album Three Cheers For Sweet Revenge sell a whopping three million copies, this was the song that showed another side to the band and cemented them as bona fide superstars rather than flashes in the pan.

It’s a great video, with dancing and weather and unequal weight distribution, so let’s jump right in…

0:02
There’s Gerard Way, all eyeliner and hair dye, staring down the barrel of the camera surrounded by candles like the Big Emo King he was. Also a solo artist, comic book writer, visual artist and animator, Gerard was inspired to begin the band after the events of September 11, 2001 jolted him into wishing to “do something with his life”.

0:04
Helena, the title of the song, comes from the name of Gerard and Mikey Way’s maternal grandmother, Elena Lee Rush, who was known as Helen. She taught the young Way boys to paint, sing and dance. Her death hit Gerard particularly hard, after he had been distant for the later period of her life due to issues with depression, alcohol and prescription drug abuse. In 2005, Gerard told Kerrang!: “I have had a lot of self hate. The most recent example was the song Helena. It’s a really angry open letter to myself. It’s about why I wasn’t around for this woman who was so special to me, why I wasn’t there for the last year of her life. Self hate is always a big part of the lyrics. I’ve felt like that all my life. I don’t know why but I’ve always hated myself. Hopefully that self hate is growing into something else now, hopefully it’s grown into caring about myself and wanting to stay alive.”

0:07
That thing bassist Mikey Way is swinging is called a censer. Three and a half years younger than his brother Gerard, Mikey recently made his DC comics debut with a new series called Collapser. Mikey’s fringe, it has to be pointed out, is not a good fringe. Later on, circa Danger Days, he swept his hair back and looked like a model, but this pushed-forward, gelled-to-the-forehead look didn’t do a huge amount for him.

0:19
Oh snap, choreography! The dancing in this video was choreographed by Michael Rooney, a highly decorated choreographer as well as the son of diminutive Hollywood legend Mickey Rooney. He also did the iconic choreography on Bjork’s It’s Oh So Quiet, Fat Boy Slim’s Praise You and Weapon Of Choice, and Kylie Minogue’s I Just Can’t Get You Out Of My Head.

0:26
Marc Webb is a movie director now, making 500 Days Of Summer, both of the Andrew Garfield Spider-Man films, Gifted and The Only Living Boy In New York. Before going into films he made dozens of music videos, working with artists including Green Day, Good Charlotte, AFI, Hoobastank and P.O.D., he also did the Duke Lion video for Big Dumb Face, Wes Borland’s incredibly silly, dramatically under-appreciated side-project. This venue, Immanuel Presbyterian Church on Wilshire Boulevard in LA, was also used as a location in The Amazing Spider-Man, as well as Sister Act 2, Legally Blonde 2 and John Wick.

0:31
Gerard Way is no stranger to the world of musical theatre; his first-ever public performance was playing Peter Pan in a school musical.

0:34
There weren’t a lot of curly-haired people in emo, something which made Ray Toro extremely important to dudes of that era who couldn’t quite do the hairdos they wanted. Ray, who always seems in interviews like the nicest dude in the world, was all set to be a filmmaker before My Chemical Romance took off. Describing his movie career, he said, “I made one short film about a guy who was obsessed with eating eggs every day. He finally opens up this egg carton and there's one egg left, but he can't crack it open, so he gets driven insane."

0:58
Due to the repeated refrain of 'So long and goodnight' (also sometimes presented in parentheses as part of the title) and Gerard Way’s feeling that the song is My Chemical Romance at their most My Chemical Romance, Helena was used to close most of the band’s shows.

1:00
The majority of the people sat in the church are My Chemical Romance fans recruited as extras. Also, amazingly, there are only about 25 per cent as many of them as it looks like there are – a special effects person used crowd duplication techniques to multiply one bank of extras and fill the space out.

1:34
Drummer Bob Bryar had only recently joined the band, replacing former sticksman Matt Pelissier shortly after Three Cheers… came out – there is an early version of the I’m Not Okay video featuring Matt. Bob was sacked during the making of Danger Days in 2010, and subsequently became a real estate agent.

1:36
Marc Webb had a good relationship with My Chemical Romance, making a total of six videos with them. “After the first video [I’m Not Okay], he told us that he knew where we lived, and that if we didn’t get him in to do a second video he’d take our pets,” said Frank Iero.

1:38
Frank Iero has had loads and loads of solo projects since My Chemical Romance called it a day in 2013. In 2016, he was hit by a bus in Sydney, and credits “an enormous rucksack” with saving his life.

2:05
Helena herself is played by Tracy Phillips, an actress, dancer and choreographer who has also worked on films like 500 Days Of Summer (which, like this video, was directed by Marc Webb), The Muppets, Charlie Wilson’s War and Jackass Number Two.

2:25
“We prefer concept videos that play out like a movie,” said Gerard Way in a behind-the-scenes shot. “A lot of our favourite videos are by Smashing Pumpkins, Bjork, stuff like that – it’s all concept. You don’t see them in a club rocking out doing their thing. Iron Maiden did, like, seven videos where they were playing in empty arenas, just changing their striped pants.” Despite taking the mickey out of Maiden and their frequently excellent trousers, Gerard cites Aces High as a big influence on Helena.

2:40
An umbrella or two, there – a reminder that Netflix’s adaptation of Gerard Way’s excellent comic book series The Umbrella Academy is available now.

2:43
There are six pallbearers, and five members of My Chemical Romance. The sixth man, behind Frank Iero, is a fan named Cameron. “I’ve always been a really big fan of My Chemical Romance,” he said. “I really wanted to be in this video and got an email asking me if I wanted to be in it. I thought, 'Oh cool, I’ll be an extra, a tiny little small part,' but I got to be the sixth pallbearer holding the coffin. I had such a great time meeting the band and have been so stoked to be given this opportunity. I appreciate My Chemical Romance so much for giving me the opportunity.” Aww, that’s nice.

2:46
Weight distribution of the coffin was something of a sore point, with Gerard and Ray at the front feeling like they ended up doing the brunt of the lifting. “The coffin was a very deceptive thing,” said Gerard. “At first you think, ‘Ah, this is nothing – it doesn’t have a body in it.’ Then all of a sudden out of nowhere it feels like you’re holding up a coffee table by yourself. I think certain people just let go at certain times.”

2:47
Frank Iero, who describes himself as being 4’11”, freely admits to not taking any of the weight of the coffin and just touching the side of it.

2:50
This rain is real, and was not planned for; when it happened, it just fit the mood so the crew embraced it. “It’s working for the video,” said Ray in a behind-the-scenes clip. “It makes it look a lot cooler.” “The rain is probably making people miserable, but in the long run it’ll make people happy” said director Marc Webb.

3:15
Gerard Way remarked that there wasn’t a lot of acting involved for the band in carrying the coffin and placing it in the hearse, as they were all simply reliving bad days they’d had.

3:22
Slam goes the door, and that’s the end. Celebratory yet sombre, in Frank Iero’s words, an oddly life-affirming song about death and self-hatred. Glorious stuff, well done everybody.