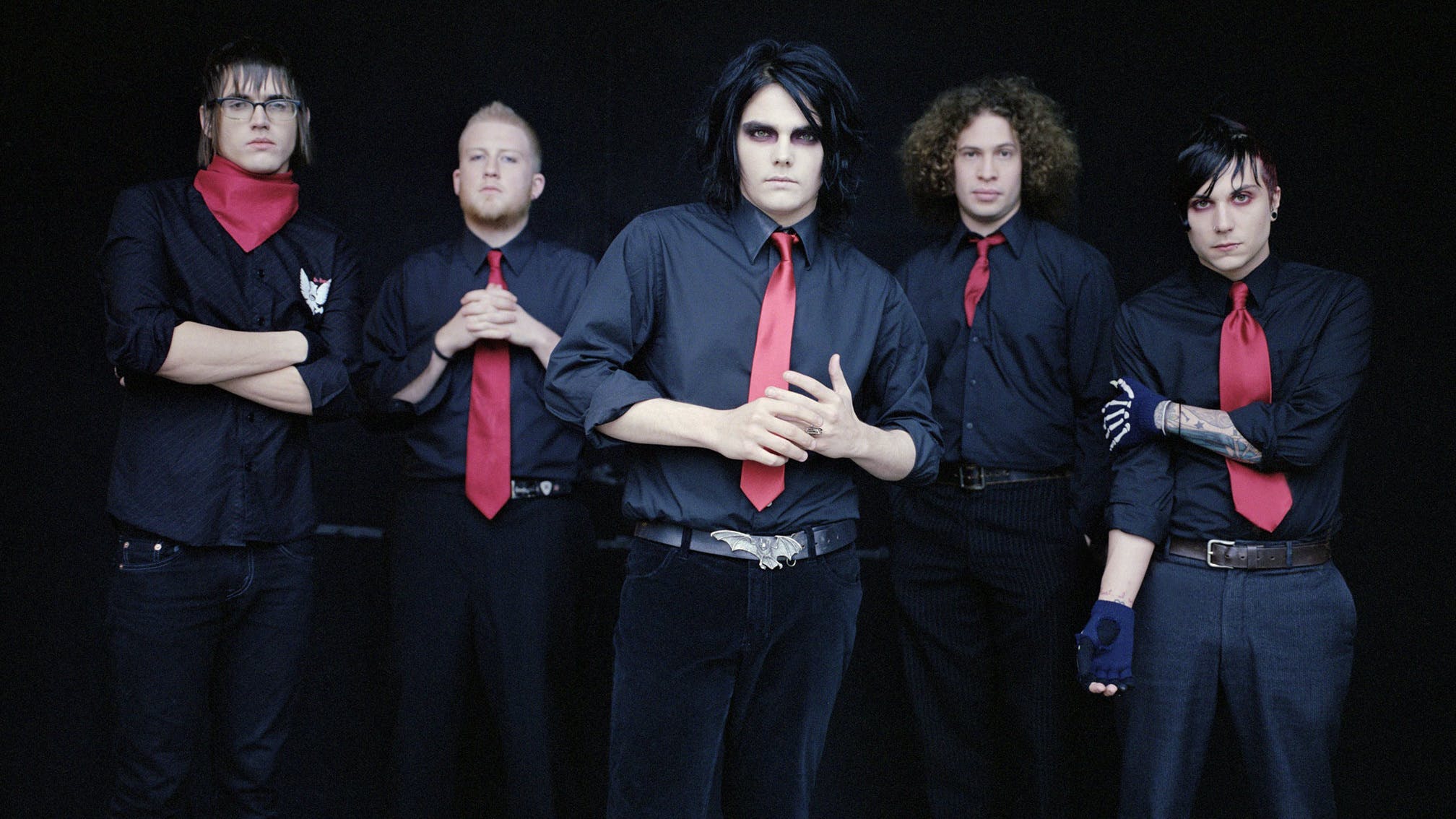 No-one saw it coming. Not even in their wildest dreams could My Chemical Romance themselves have imagined just how much they were about to change the world. But change the world they would, and it all started in the summer of 2004, thanks to the catalyst spark set off by their second album and major label debut, Three Cheers For Sweet Revenge.

Rewind just a few months, to March 13 and the band’s first in-depth profile piece in Kerrang! issue 996. Welcoming us into the Way family home in their native New Jersey, the My Chemical Romance we encountered then weren’t anything like the swaggering emo scene behemoths they would swiftly become across the next 12 months. Cutting a far more gawky collective figure, they were accompanied by endearing photos of frontman Gerard and his bass-playing brother Mikey, posing with their mum Donna Lee Way as she sat at the family’s heirloom piano wearing the band’s latest merch. Anyone seriously backing this gaggle of provincial goth kooks as the next big thing would have surely been considered certifiable.

And yet, deep in the heart of Sopranos-country, where guitarist Ray Toro claimed to have witnessed people overdosing on the streets on a regular basis, something very special indeed was stirring. They took us on a tour of their old haunts, including The Loop Bar in Passaic Park, where Gerard used to get wasted most nights. That is, once he’d emerged from endless hours spent in the cocoon of his mum’s basement, drawing the Dada-ist comic series The Breakfast Monkey – something he’d hoped to franchise to the Cartoon Network as a means of maybe one day escaping the crushing grimness of the neighbourhood’s live-for-the-weekend mentality. All five members – completed by guitarist Frank Iero and then-drummer Matt ‘Otter’ Pelissier – were until recently still living at home with parents. Little did they know then that what they were sitting on was a set of songs that would soon make them superstars, and an album that would eventually sell in excess of three million copies across the globe.

It was supposed to go another way entirely. Billed as a semi-conceptual sequel to the tale of the Demolition Lovers, first introduced on the band’s 2002 debut full-length I Brought You My Bullets, You Brought Me Your Love, Three Cheers For Sweet Revenge set out on a mission to tell “the story of a man. A woman. And the corpses of a thousand evil men…”, as detailed in the album’s liner notes. But throughout the course of its creative journey, a much more personal exorcism would occur, making for a record hewn from the darkest corners of grief, pain and self-flagellation – a collection of songs ‘made from the sharpest things’ (Give ’Em Hell Kid). Fresh after celebrating their recent signing to Reprise Records, following the modest ripple of success caused by their debut, in November 2003 Gerard and Mikey’s maternal grandmother Elena Lee Rush died. Engulfed in a cloud of mourning for the passing of a lady who not only taught him how to sing and paint as a child but also bought the band their first touring van, Gerard poured his emotions into the lyrics he was writing, particularly on the album’s opening track, Helena, named in her honour.

“It’s a really angry open letter to myself,” he explained of its sentiment, as part of the band’s first appearance on the cover of Kerrang! a few months later. ”It’s about why I wasn’t around for this woman who was so special to me, why I wasn’t there for the last year of her life. Self-hate is always a big part of the lyrics. I don’t know why, but I’ve always hated myself. Hopefully that self-hate is growing into something else now; hopefully it’s grown into caring about myself and wanting to stay alive.”

Until then, death had circled around the band as a kind of caricatured plot device; as something that suited their image as sullen sorts drawn to the mystique of the darker edges of human experience, rather than something tangible. In lighter exchanges with Kerrang! pre-dating Three Cheers For Sweet Revenge’s release, the frontman goofily talked about playing with ouija boards, and about his misspent youth getting drunk in cemeteries. Suddenly, however, death was all too real. It was then he decided to get sober – a period he describes as one of the most difficult of his life. But something inside was telling him this was the band’s shot at the big time – that there may not be another. “When I quit drinking I could see myself clearly, and I wasn’t sure how much I liked it,” he reflected. It wasn’t just Gerard who could sense something extraordinary was afoot, either. Producer Howard Benson had an inkling that this was a band unlike many others – particularly when it came to the presence, talent and charisma of their creative fulcrum. “I always look for a star in a band,” he told Kerrang!, “and Gerard was certainly that.”

Recorded in Bay 7 studios in North Hollywood in Los Angeles, Three Cheers For Sweet Revenge was made for $200,000 – a meagre outlay by 2004 major label standards. Legend has it that Gerard would often record his vocals in his smalls because of the heat, while an assortment of porn DVDs and Stanley Kubrick’s 1971 dystopian classic, A Clockwork Orange, played in the background. The band stayed in the Oakwood area near Beverly Hills, as a deliberate ploy to remind them just how different they were from everyone else, of how the glitz, glamour and garishness of Hollywood was the antithesis of what they stood for. The experience could not have been much more contrasting to the two-week blitz they spent making their debut album back home on the East Coast with Thursday’s Geoff Rickly – less than four months into being a band. This time it was serious. And their purpose was crystal clear.

“We all felt like outcasts,” Gerard explained of the thematic spine bonding the record’s ideas. “That’s what brought us together. We thrive on conflict, opposition… everything. I’ve always felt like that. At first it was us versus New York City. Then it felt like the band vs. America. Now it’s us vs. the world.

“This record is revenge for us,” he added, “on all the people that said we would never succeed. We thought we could get even for all the shit that’s happened to us in our lives. Revenge that could mean we could break out. Most of all, revenge on all the people who never believed in us. It led to this extreme confidence, where I felt like nothing could touch us. Nothing anyone said could hurt me when I was in this band.”

That sense of vengeance and violence is felt no more sharply than on the band’s trailblazing lead single, I’m Not Okay (I Promise). It was the last song penned for Three Cheers For Sweet Revenge, finding Gerard writing about his high school experiences for the first time. “I just wanted somebody to love me [back then],” he confessed, self-deprecatingly. Thanks to the now-iconic Marc Webb-directed music video (actually the second one made, following a more standard, live footage montage version for its initial release) the song, and by extension the band, became an outlet for a generation of music fans who could relate to its simple sentiments of defiance and emotional honesty.

“Picture a fat kid,” Gerard said, reflecting on his youth. “I fucking plumped up pretty good, working at a comic store and eating cheeseburgers all the time… On my first day in high school I sat all alone at lunchtime. It was the classic story – the weird kid in the army jacket, horror movie T-shirt and long black hair. I was more interested in music and being creative. People were never really mean to me. They mostly just left me alone. I think, really, I just wanted to be alone.”

At the start of 2005, My Chemical Romance were the main support act when fellow emo torchbearers Taking Back Sunday played Brixton Academy in London. By the end of that year, they would sell out two nights as headliners themselves, following a summer in which Gerard Way needed a personal bodyguard to protect him throughout a legendary trek around the U.S. on Warped Tour. As the momentum of the album’s subsequent singles Thank You For The Venom, Helena and The Ghost Of You catapulted them on to magazine covers and ubiquitous radio and music television airtime, My Chemical Romance became a bona fide phenomenon. Their shows were marked by a fervour seen maybe once in a generation, with fans copying the dark make-up, striped attire and straightened locks of their idols onstage. They were nominated in four separate categories at the 2005 Kerrang! Awards, scooping the big prize for Best Album – defeating the might of Green Day’s American Idiot, no less. This was a cultural awakening on an unprecedented scale, and it was fuelled by the fans.

“The kids are there for us,” Gerard noted of their breakthrough. “It’s not so much us against them anymore. Now it’s all of us together against something much larger. That’s the best fucking feeling in the world. When 1,000 kids are throwing their fists in the air and screaming along to a song, that’s a fucking victory.”

Yet even in the midst of that success, the task ahead still felt gargantuan.

“We could sell a million records and still feel like the underdogs,” the singer asserted.

2006’s follow-up album, The Black Parade, would of course make Three Cheers… look almost small fry by comparison. Arenas would be filled. Festivals would be headlined. Tabloids would go to war on the band. And the world would feel a damn sight emptier in their absence, following the eventual 2013 decision to call time on things.

None of that would have been possible, however, but for the spirit, style, and self-belief of the band’s era-defining second album. That feels like something worth cheering about.