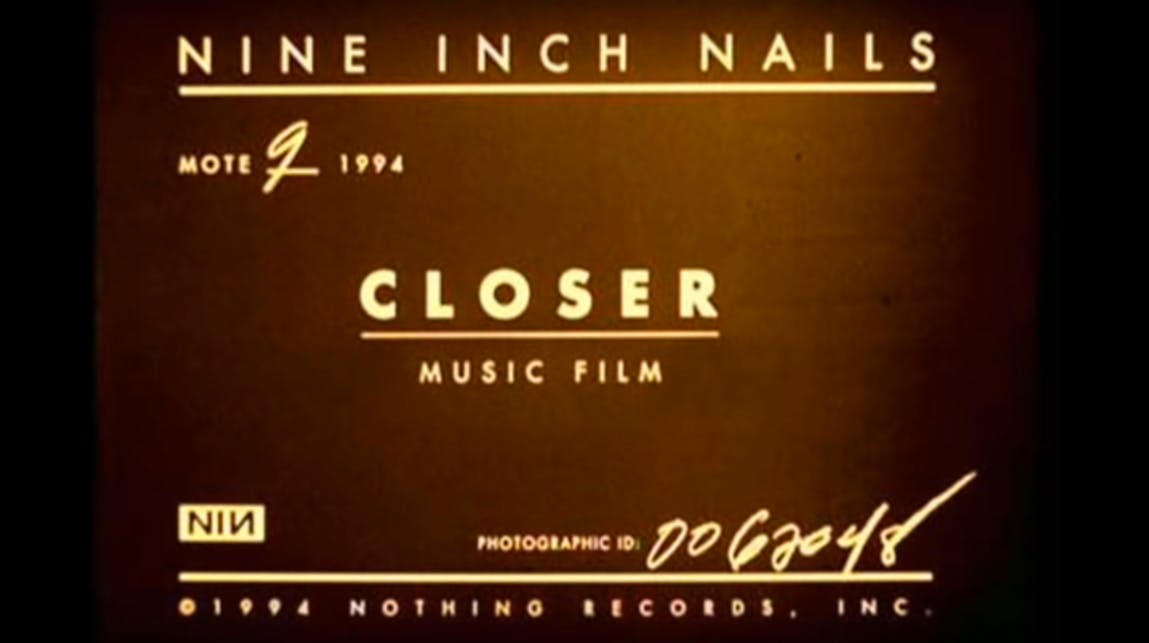 There are music videos, and there are MUSIC VIDEOS, you know? Nine Inch Nails’ video for Closer, directed by Mark Romanek, is one of those ones that feels like it earns capital letters, an ambitious piece of complex, controversial art that frequently tops lists of the best music ever made and somehow adds to the song that inspired it. Even Trent Reznor, the man who wrote and sang it said, "The rarest of things occurred: where the song sounded better to me, seeing it with the video. And it's my song."

It’s a pretty NSFW experience, something Reznor and Romanek agreed not to compromise on beforehand.

“Trent said, 'Fuck it, let’s not do two versions, let’s do our version, and if MTV won’t show it, fuck MTV,'” recalls Romanek. You have been warned – join us on a deep dive into a gory, surprisingly meaty, world of Nine Inch Nails.

Let's have a look at it to refresh our memories, shall we?

0.01
Straight away it’s old, knackered and scratched. “It seems obvious now, because it worked, but it was a hard sell for Trent and others to have these vintage-looking images on such a new-sounding song,” said director Mark Romanek. “I wanted it to feel like a found object, almost like some old film found in a closet somewhere, in a science institute in Prague or somewhere.”

0.10
This heart was built by musician turned artist Screaming Mad George, who created effects for entries in the Nightmare On Elm Street series and the original Predator. He also created Slipknot’s masks, based on ideas by the band – initially the masks were homemade, but after 2000 or so George got involved. Behind the scenes the heart was very lo-fi, with three men hiding behind the wall blowing, pumping and spraying freon gas through the tubes to make it beat. Romanek thought the opening drumbeat sounded like a heart accompanied by an industrial hissing, which inspire the half-organic, half-industrial creation.

0.21
Reznor’s microphone here was actually designed for a bass drum – Romanek liked it because its silhouette reminded him of a nipple. The curved mic stand was made especially for the video, designed to resemble the vertebrae of a snake.

1.01
Despite the song being about self-hatred and obsession, the signature line, 'I wanna fuck you like an animal' makes people think it’s a bangin’ tune. Tommy Lee, on one of those endless talking-head shows, said "Come on dude: 'I wanna fuck you like an animal'? That's the all-time fuck song. Those are pure fuck beats – Trent Reznor knew what he was doing. You can fuck to it, you can dance to it and you can break shit to it.” Limp Bizkit’s Fred Durst is a huge Nine Inch Nails fan, incorporating the signature line from this song as well as two other NIN tunes into the line, 'You wanna fuck me like an animal, You'd like to burn me on the inside, You like to think that I'm a perfect drug, Just know that nothing you do will bring you closer to me' from the song Hot Dog.

1.03
This sequence is a homage to a painting by Francis Bacon of a man standing in front of sides of beef that resemble angel wings. “We got these sides of beef pretty cheap because they were already rotting,” says Romanek.

1.12
This is production designer Tom Foden, who had worked with Romanek on several other projects, and who Ronakek was determined to get into a video at some point, despite his camera-shyness, due to his interesting face.

1.26
“I pretty much tortured Trent for three or four days on this video,” recalls the director. “I spun him so long that I believe he vomited. If he didn’t, he came close - he staggered over to a trash can. He was pretty much treated like a pinata on this video. But he never complained once – I think he knew we were making something interesting.”

1.47
This sequence with the seven men behind the screen is lifted from Street Of Crocodiles, a massively influential animated short by the Brothers Quay. Tool’s Maynard James Keenan is also a huge fan, as are Hollywood big-shots Terry Gilliam and Christopher Nolan. Production designer Tom Foden is in the front centre.

2.01
The pig’s head comes from a photograph by Man Ray, who has a name like a minor Aquaman villain but isn’t. He was a hugely influential figure in the Dadaism movement alongside figures like Salvador Dali. Like the sides of beef seen earlier. The pig’s head is real. “The entire crew was overwhelmed by the smell,” remembers Romanek. “We ended up dripping Old Spice cologne onto filter masks and bandanas due to the horrific stench.”

2.15
Despite inspiration from a lot of sources, it is the artist most commonly cited in reference to this video is American photographer Joel-Peter Witkin, who creates complicated tableaux in the style of Victorian medical daguerreotypes, frequently featuring people with disabilities or disfigurements, and occasionally actual corpses. Romanek objects to Witkin’s influence being overstated, telling NPR: “I bristle a bit at it sometimes being labeled 'a Joel-Peter Witkin rip off.' For one, the nods to Witkin are few. Also, Witkin's own work is full of recontexualized work by other artists."

2.17
This image of Trent in the mask is a reference to a Man Ray photograph. Romanek recalls a lot of the women on set being particularly interested in how this sequence was doing.

2.49
These two are real siblings who had to wait on set stitched together for hours before their shot.

2.59
This is a nod to a photograph by James Van Der Zee, a documentary photographer famous for his portraits of black New Yorkers during the Harlem Resistance.

3.21
The still life incorporating Reznor’s face on a mannequin was inspired by a painting by Giorgio de Chirico, an early Italian surrealist. The makeup, which took four hours to apply, led to Reznor referring to himself as “Football Head”.

3.57
Romanek tried blowing compressed air into his own mouth before trying it out on Reznor, concerned it could damage his throat or vocal cords. “It looks a lot worse than it is,” he says, “It just makes your mouth dry.”

4.22
The image of Reznor floating above the keyboard was inspired by 2001: A Space Odyssey, although Romanek also cites Mary Poppins as an influence. “The first movie I ever remember seeing and being excited by was Mary Poppins” he recalls. “There’s a lot of floating in that film and it just stuck with me.”

There you have it. Arty, intelligent and exhausting, sexy, smelly and self-destructive, they just don’t make ‘em like that anymore. Good work, everyone involved. That was absolutely fucking knackering.