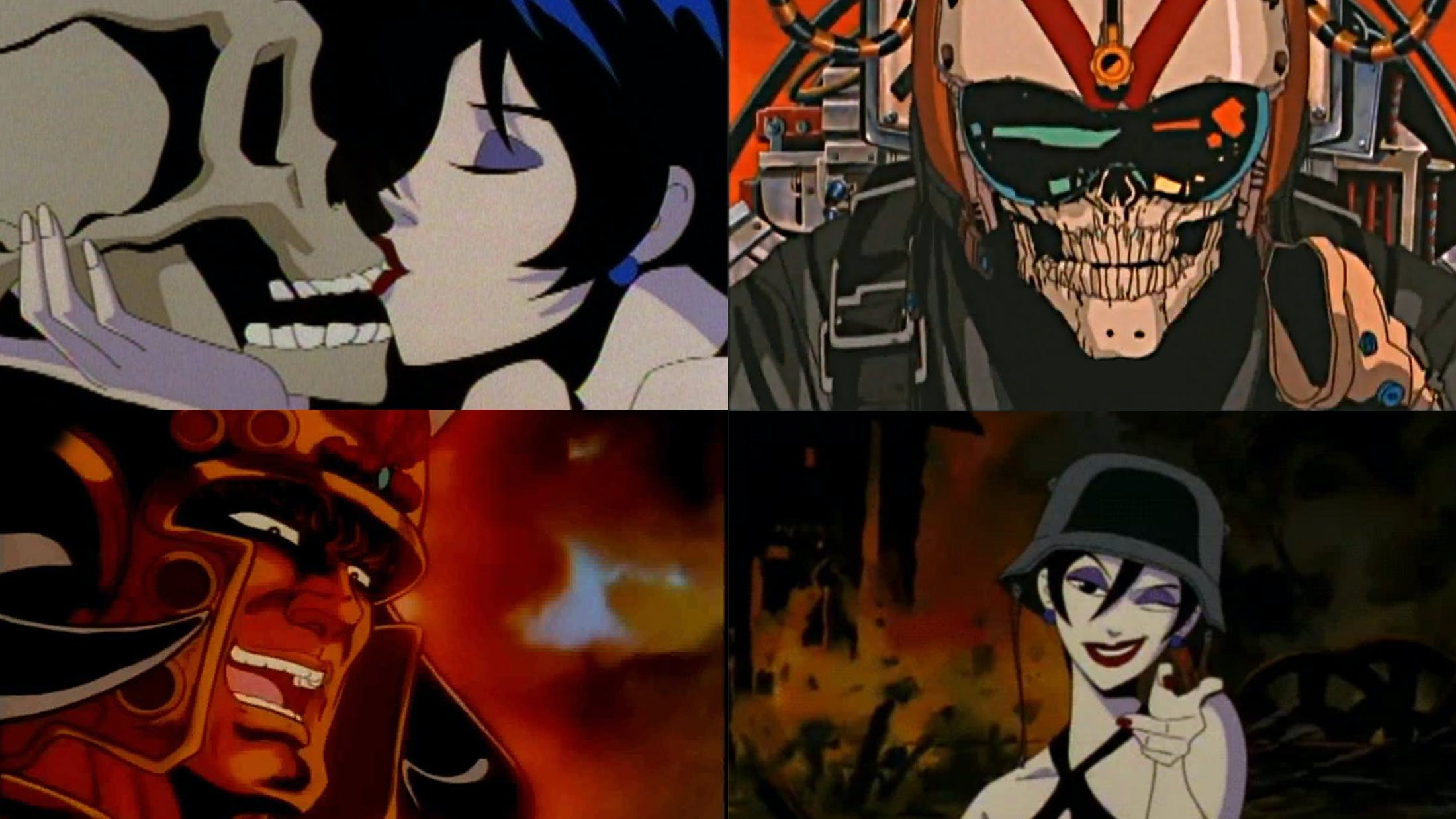 Pearl Jam – grunge pioneers, Ticketmaster’s nemeses and holders of a gross joke name that doesn’t need thinking about – aren’t huge fans of music videos, despite being very good at them. They shunned them almost for the entirety of the 1990s, releasing three albums in a row with no supporting videos at all. 1992 to 1998 was peak MTV, but Pearl Jam didn’t want to play the game.

Their fifth album, 1998’s Yield, brought in a few changes to the band in general – they started working more collaboratively than before, and taking a slightly looser approach musically – and the decision was made to return to the world of music video, albeit in a way that didn’t involve them being filmed or anything.

A big bluesy banger, the song Do The Evolution was heavily influenced by Ishmael, a novel by Daniel Quinn about the hubris of mankind and is, according to Eddie Vedder, about "someone who's drunk with technology, who thinks they're the controlling living being on this planet."

0.02
Two seconds in and the ambition of this animation is clear. The speed of it all! The scale of it all! The crazy-ass colours! This is the most pioneering animation 1998 – when computers were the size of houses and rendering a few frames would have taken overnight – has to offer, and it holds up amazingly well.

0.09
Holy hell. Nine seconds in and there’s been, what, like 30 cuts? One of the things that is totally evident all the way though this video is how much better it is than it needs to be. They could have done half the work and it would still have been an incredible piece of animation. It’s properly boundary-pushing, exhausting and extraordinarily impressive.

0.10
A sperm fertilises an egg, then BOOM, the Big Bang, and WHAT, there’s Death, in the form of a beautiful laughing woman.

0.16
This 15-second sequence, from 0.16 to 0.31, going from simple cell division to fish to dinosaurs to mammals to apes to man to tools, covers the first 3.5 billion years or so of Earth’s existence. You can’t do that any other way. Animation is fucking brilliant.

0.36
Crusaders! Burning crosses! We now go on a big journey from some of humankind’s Shittest Hits, a miserable non-celebration of some of the many ways we’ve found to hurt, maim, oppress, enslave and kill one another.

0.41
One of the central themes of the video and song, there – we might think we’re all modern and clever and snazzy with our money and sunglasses and cigars, but we’re still primitive apes beating the shit out of each other. We just have slightly different ways of doing it now.

0.44
This supposedly happened in the big Wall Street crash of 1929. On one day in particular, Black Thursday, prices plummeted so dramatically that loads of super-wealthy men essentially became instantly penniless, and flung themselves out of their swanky penthouse boardrooms. It probably didn’t happen but it’s a compelling image.

0.53
A decision was made not to use swastikas in this video, but we all know who these assholes are. The worst, worst, worst assholes.

1.09
SHE HAD A SKELLINGTON FACE FOR A SECOND!

1.14
This shot of a guillotine has a colour palette particularly similar to another music video with elements made mostly by the same creative team – koRn’s video for Freak On A Leash. It seems as good a moment as any to point out who’s behind it all. The animation was co-directed by Spawn creator Todd MacFarlane (who would later work on the koRn video) and Kevin Altieri, a veteran of the never-bettered Batman: The Animated Series. Altieri co-wrote it with producer Joe Pearson, and teams in California and South Korea did the hands-on animating. In a press release put out when the video was unveiled, Pearl Jam stated: "We choose to work with people who convey a particular attitude and this video is a tribute to that attitude. As artists we are challenged to expand the meaning of our work and by utilizing this visual medium and working with a visionary like Todd, we were able to further explore some of the themes we depicted in the song Do The Evolution. Basically we've tried to make a good stoner video."

1.42
A lot of love for how Vedder sings the word 'irresponsibly'. He has said that Do The Evolution is his favourite track from the album Yield, telling MTV it’s one of the rare Pearl Jam songs he can listen to as a fan. He said, "I can listen to it like it's some band that just came out of nowhere. I just like the song. I was able to listen to it as an outside observer and just really play it over and over. Maybe because I was singing it from a third person [perspective] so it didn't really feel like me singing."

1.59
There’s a world-weary cynicism to the 'They’re all the fucking same' sequence here that, sadly, still rings all too true two decades later.

2.14
Maybe it’s all going to be okay? Maybe hope and love will win in the end?

2.22
This part set in a World War One-like world is a nod to the 1939 MGM cartoon Peace On Earth, set in a post-apocalyptic world where squirrels living in a world devoid of humans talk about how mankind destroyed itself through war. It was remade in 1955 and made even more violent, as the intervening years had brought the nuclear bomb.

2.38
That dance around the fire has been done by – let’s count – cavemen, the KKK, tribesmen, Nazis and now angry drunks.

2.42
Horrible. Vision after vision of cruelty inflicted by men not only on each other, but on women, children and animals.

2.53
A skull in a flight helmet is a popular motif among air regiments, often accompanied by slogans like 'death from above'. It doesn’t seem implausible that Derek Riggs’ cover for Iron Maiden’s Aces High was in the back of someone’s mind when storyboarding this bit either.

2.55
This is a direct reference to a photograph known as Bloody Saturday depicting a baby injured in a Japanese bombing raid on civilians in Shanghai. Warning: it’s extremely upsetting.

3.08
Work-as-slavery might not be the most tasteful or sensitive comparison to make, and in real terms, comparing the drudgery of an office job to being another person’s actual property is pretty dodgy, but this isn't about being literal, it’s about big bleak brushstrokes.

3.15
One of the most prescient and horrible bits of the video, the indoorsy slob addicted to violent pornography, feels like one of those awful things where the makers of the video probably thought things were in a pretty bad state in 1998, but it’s all in fact got much, much worse.

3.25
This bit was almost certainly inspired by Frank Herbert’s excellent Dune, and David Lynch’s film of it. A new adaptation directed by Denis Villeneuve of Blade Runner 2049 fame is currently being filmed.

3.30
A sign marked ‘YIELD’ being shot is briefly shown as part of this flashing screaming breakdown. That is, of course, the name of the album this song features on.

3.39
In a way, could humanity destroying itself ultimately be seen as a happy ending? After this brutal fucking experience it’s tempting to think so – that maybe our species’ determination to ruin everything might be best left to reach its natural conclusion.

3.55
Well, Christ. That was tiring, and emotional, and impressive. Astonishingly, this video didn’t win any awards. It was nominated for the MTV Video Music Award for best short-form video, but lost out to Madonna’s Ray Of Light. The Ray Of Light video is, like, fine, but is pretty much Madonna dancing in front of a green-screen. Doesn’t seem fair really.