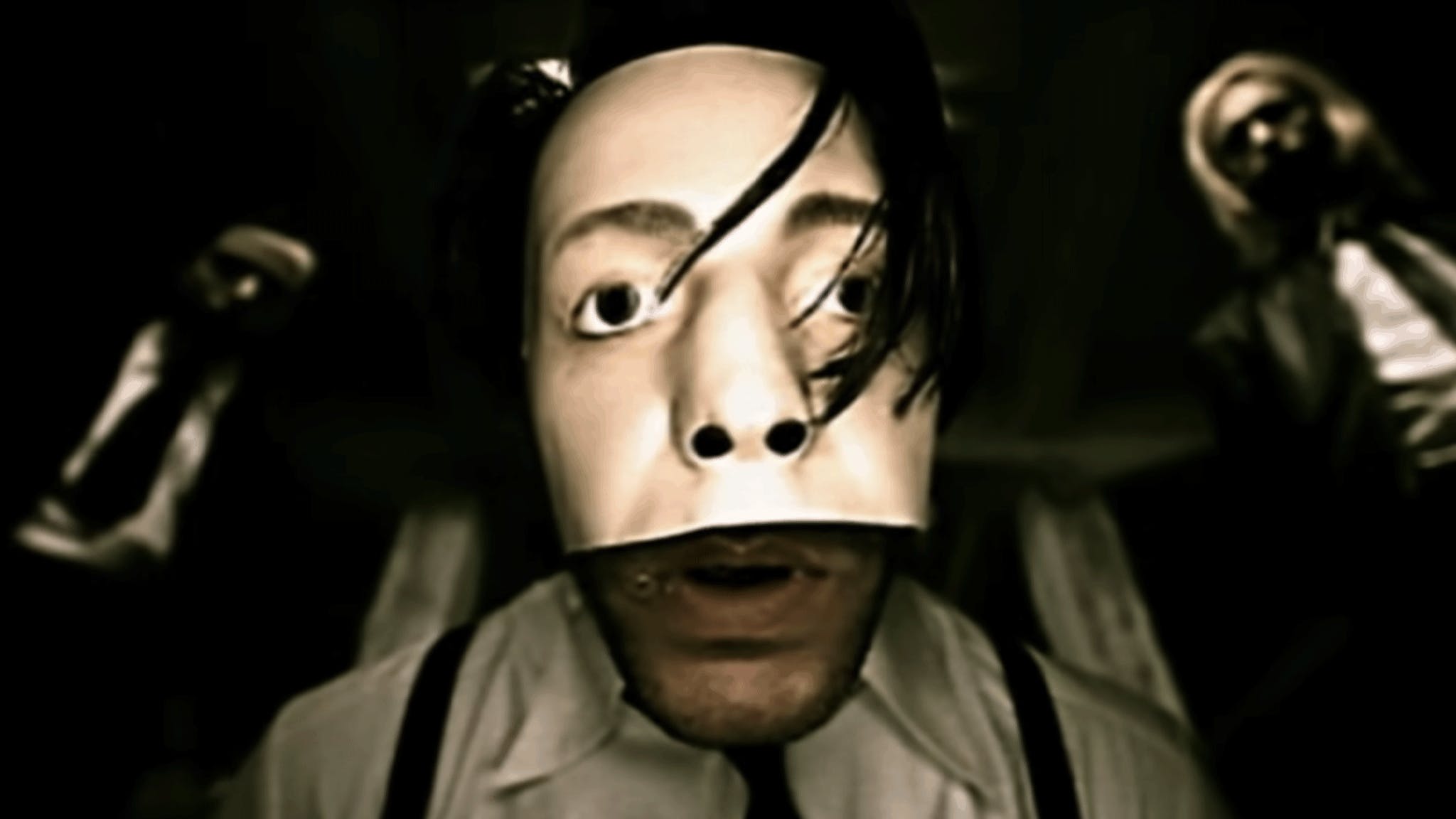 Music transcends language – a big fat fuck-off riff exists on a plane beyond mere words. Even if you don’t understand German, you know Rammstein aren’t singing about the joys of a meadow full of buttercups.

Du Hast, arguably Rammstein’s best-known tune due to its inclusion on the quadrillion-selling Matrix soundtrack, is a colossal banger, massive Teutonic industrial metal with a lovely robotic-sounding synth hook on top of it.

The video, directed by Philipp Stölzl, has a lot going on it it – crime, masks, love, violence, betrayal, fire and booze. Let’s have a big ol’ dive in, shall we?

0:12
There’s a real sense of foreboding, isn't there? Both through the visuals – flashes of fire, debris, blood, broken glass and explosions – and the reversed-sounding electronic synth bit. The blood means it would probably seem pretty foreboding even without the audio, but the audio does its bit.

0:19
If there’s a more succinct way of communicating 'this will probably end horribly' than an ominous-looking black car pulling up outside a workshop in the middle of nowhere, we’re yet to see it. Rammstein used the building again on the artwork for single Ohne Dich.

0:21
This man is Rammstein drummer Christoph 'Doom' Schneider. He chose his nickname when arranging copyright for material he had worked on – there were other Christoph Schneiders registered at the copyright office, so he used his favourite video game as a nickname. The woman is German actress Astrid Meyerfeldt, who has appeared in loads of stuff in Germany, including a comedy with the title The Invention of the Curried Sausage.

0:30
Oh, fucking hell. This is Till Lindemann, frontman of Rammstein, a big strong giant of a man. Many years ago, he was a promising young swimmer potentially headed for the 1980 Olympics, but an injury derailed that plan. Till is extremely dedicated to his art, and willing to suffer greatly for it. His enthusiasm for pyrotechnics has led to him being burned fairly extensively over the years, and he once opted to have a surgical incision made in his cheek to stick a lightbulb inside his gob for Rammstein’s Ich Tu Dir Weh video. The dude’s a machine.

0:40
This song is in German, and relies lyrically on a lot of clever puns, homophones and double meanings which would be lost in a translated version. As an example, the title itself has a double meaning, playing on the identical sounds of “Du hast” and “Du hasst” – the first means “I have” while the second means “I hate”.

0:49
There’s a sort of Bonnie & Clyde, Reservoir Dogs thing going on in this video: a couple on the run, a suited gang, a general sense that at least someone is going to die…

0:55
Look, it's the rest of Rammstein! Unusually for a band who has been around as long as they have, Rammstein’s line-up has never changed, constituting the same six members since 1994. There are various side-projects and other ventures they all get up to during hiatuses from Rammstein activity, and band members cite their mutual respect for one another’s wishes as a major reason for the project’s longevity.

0:58
What a creepy fucking bunch of dudes.

1:02
This reversed explosion is far from the only time Rammstein and fire have crossed paths. Till is a trained pyrotechnics professional, and Rammstein’s live show is a fiery, apocalyptic spectacular, with flamethrowers aplenty. This began from the frontman’s discomfort onstage and desire to create a distraction to take attention away from him. He told German Rolling Stone: “I was uncomfortable, and I wanted to compensate for that somehow. That's how the fire came into play.”

1:36
Somehow taking the masks off hasn’t made them any less creepy. How?

1:57
There’s more wordplay involved in this big-ass chorus, with a riff on German wedding vows and a reference to a private part going on. According to the internet, “Willst du, bis der Tod uns scheidet, treu sein?“ means “Do you want to be faithful until death separates us?", while, “Willst du, bis zum Tod der Scheide, treu sein? Sie lieben auch in schlechten Tagen?” means, “Do you want to be faithful until the death of the vagina? Love her even in bad days?” And of course “Nein!” means no.

2:06
Someone’s going to die. So, what it seems like is going on is, Doom and his girlfriend are planning to betray Doom’s gang, right? He’s partying with them and then he’ll turn on them in a sec.

2:22
Till is one of those singers whose voice exactly matches his appearance. If you heard him sing and were told to draw the man you were listening to, he’s exactly who you’d draw.

2:34
Well, shit. The rest of Rammstein have turned on Doom, and we’re entering into an intense, disorienting, 'lots of German dudes shouting in your face' segment.

2:43
Singing along to this as best you can, just about managing “gefragt”, you might be thinking to yourself, 'I love this, but I wish it was in English.' There is an English version, found on the special edition of the album (well, the last verse is in German), but the meaning of the words is different – a straight translation wouldn’t maintain the double meanings, so it’s a lot straighter lyrically.

2:48
Rammstein did originally write songs in English, but opted to switch back to their native tongue for two reasons – ease and the blunter, stronger sound. “Writing in German was easier, and it sounded harder than English with its soft vowels,” Till has said. He has also recorded songs in English for his solo project (entitled Lindemann), but has said that asking Rammstein to do material in English is “like asking Buddha to kill a pig”.

2:54
Petrol, matches and slow methodical steps are rarely a combination that leads to one of those nice endings things used to have, where everyone is high-fiving and chuckling.

3:02
They really like fire – look how lovingly this is photographed.

3:08
Oh, fuck. There’s a man, presumably Doom, on fire. This is flammable water off a burning duck’s back for Rammstein, of course – Till occasionally performs songs while almost entirely engulfed in flames, because he is the type of person the laws of nature don’t apply to.

3:24
Christ, it’s Doom. He wasn’t burned. He didn’t betray his gang. Who was just burned? Why does he just give his girlfriend a sideways glance? They must have burned another man – another man, eh? Someone involved with his girlfriend, perhaps?

3:44
Boom. That’s why. Christ. He’s blown his girlfriend up. The burned-out car, blood and broken glass we saw at the beginning was this. What a bleak fucking ending.

3:49
Like, even though it’s really horrible and they’ve just killed someone, they do look pretty cool. Well done, Rammstein.