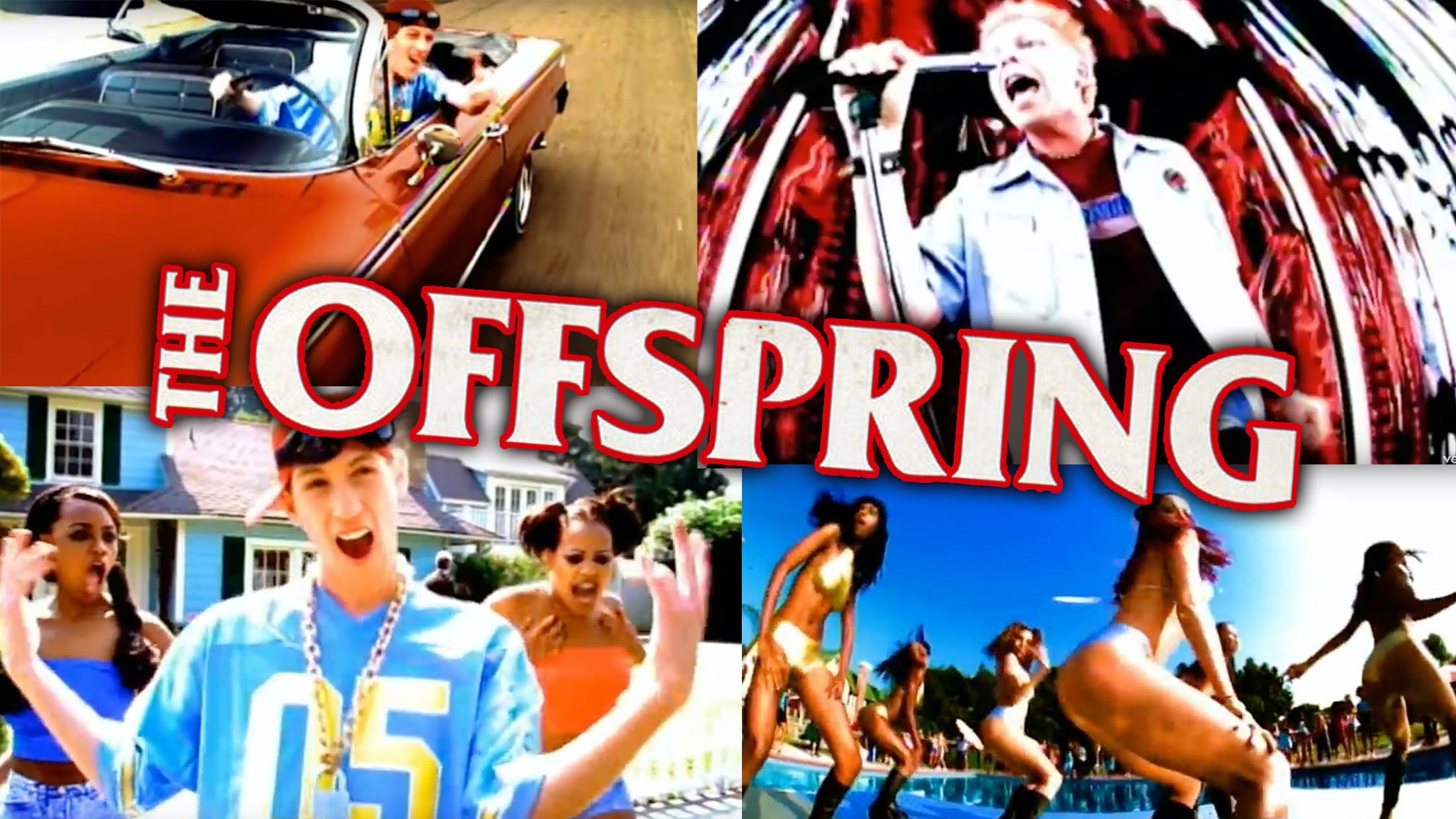 It’s summer, it’s summer, it’s wonderful summer, and what could be more summery than the sun-soaked Californian summer silliness of The Offspring’s Pretty Fly (For A White Guy)? The problematic classic marked the commercial high point of the second stage of The Offspring’s career – stage one saw the cornrowed upstarts achieving incredibly unlikely massive commercial success, while stage two was polished, politically dubious material lamenting the state of the modern world.

It was a giant crossover hit that worked equally as a giant pop-punk tune and a novelty record. The video’s a big laugh, and has a very appealing swimming pool in it, so let’s slap on the factor 31 and a gold bikini and dive right in.

0.06
This nonsense fake-German is sampled from Def Leppard’s Rock Of Ages. That song then quotes a Neil Young one, with the line 'It’s better to burn out than fade away' – as also quoted in Kurt Cobain’s suicide note – taken from Young’s song My, My, Hey, Hey (Out Of The Blue). Everyone lifts bits and bobs from somewhere. The Offspring had to pay Def Leppard $10,000 for the sample, mind you.

0.09
The video’s White Guy is portrayed by actor Guy Cohen, who ended up being chosen for the role after Offspring frontman Dexter Holland’s first choice, Seth Green, was unavailable. Green had played a similar role in the teen comedy Can’t Hardly Wait that summer. Cohen ended up going out on tour with the band and coming out during that song, doing silly dances to rapturous response. “I do The Running Man, I do the Roger Rabbit, I get down on the floor and freak the ground – oh man, people just explode!” he told Spin. Check out this live performance from 1999 featuring Cohen really going for it, as well as a lot of focus on Higgins X-13, the band’s touring backup singer and percussionist and unofficial fifth member.

Higgins and Cohen both also appear in the video for the follow-up single, Why Don’t You Get A Job?, with Cohen reprising the role of White Guy and Higgins playing “that dick” from the second verse.

0.21
There’s Kevin Wasserman, better known as Noodles, just strolling down a suburban street playing guitar. Noodles owes being in the band to his senior years – he was the school custodian, a few years older than the others, and while he couldn’t play guitar he could buy beer. In the early days of touring, when Noodles fell asleep the other band members would sometimes colour the lenses of his glasses with marker pens.

0.35
Heyo, it’s Dexter Holland. Dexter was doing a PhD at the University of Southern California in molecular biology, and came within a dissertation of completing it before musical success took over. He is a huge fan of collecting stamps apparently, but only stamps from the Isle Of Man. No idea.

0.42
Guy Cohen also appears in Rat Race, a 2001 screwball comedy that also features the aforementioned Seth Green, and ends with the entire cast dancing to All Star by Smash Mouth. It’s rubbish!

0.49
While Dexter, Noodles and guitarist Greg K have been with the band consistently for three and a half decades, they’ve been through a few drummers. Original drummer James Lilja left in 1987 to become an oncologist. Last year he was on trial for malpractice, when a juror had a heart attack, and Lilja saved his life. This led to a mistrial ruling, as the jurors would find it hard not to be biased. This is Ron Welty, the Offspring’s second sticksman, who joined at just 16 years old and spent another 16 with the band before leaving in 2003 to start his own band, Steady Ground. Atom Willard of Rocket From The Crypt, Angels And Airwaves and Against Me!-fame joined for four years, and in 2007 current drummer Pete Parada, formerly of Face To Face and Saves The Day, took over.

0.58
Dexter Holland is a fan of some hip-hop, citing NWA, Ice-T, Beastie Boys and Public Enemy among his favourites, and when this song came out he was keen to make sure it wasn’t misconstrued as racist – that it wasn’t anti-rap or anti black culture, but was instead anti poseur, fuelled by Dexter’s hatred of culture-appropriating groups like the Backstreet Boys. “These groups make Hanson look like Rancid,” he said. “I really do hate that stuff. Buff white guys singing slow jams.”

1.07
Ricki Lake was cited by Dexter as part of the genesis of the song. He said “It’s really inspired by wannabe gangsters. Guys who go to malls and get the gangsta rap clothes. Guys on Ricki Lake who won’t listen to their moms.”

1.17
The 'Give it to me, baby' vocals are performed by Nika Futterman and Heidi Villagran. Futterman is now a successful voice actress who has worked on pretty much every big deal animated show out there, including voicing Asajj Ventress in Star Wars: The Clone Wars.

1.30
The target of the song, as Dexter told Spin, is young men who “are from, like, Omaha, Nebraska – regular white-bread boys, but who act like they're from Compton. It's so fake and obvious that they're trying to have an identity. I wanted to write a song where people in high school would go, ‘I know exactly who this guy’s talking about: so-and-so in third period.’ And he’ll like it too. That’s kind of the beauty: making fun of people who don’t know they’re being made fun of.”

1.34
The Offspring invited oft-mocked rapper Vanilla Ice to join them on stage for this song once, and he performed a line from Ice Ice Baby after his mention.

2.00
Cohen was channel-surfing once and spotted the very top he sports in this video, worn by a member of the kind of boy-band Holland was targeting. “I’m sure lots of people see the video and go ‘Dang, that guy’s cool’” said Cohen. “I was watching MTV and one of the ‘NSync guys had the same Fubu jacket I wore in the video.”

2.14
Getting a 31 tattooed is not unknown among hardcore Offspring fans.

2.21
The sun-soaked technicolour look of the whole video was at the time something of a trademark of director McG, best known for making the two Charlie’s Angels films. McG was also briefly the frontman of Sugar Ray, a band he went on to direct videos for, as well as Sugar Ray and Korn. He made Terminator: Salvation, This Means War and The Babysitter, and executive-produced The OC (the first season of which is untouchably good).

2.35
Barely shown at any point in this video is bassist Greg K, who formed the band with Dexter in the early '80s after the two of them met doing cross-country together in school. Greg does very few interviews and is the most reclusive member of the band, which may explain the lack of close-ups.

3.06
The YouTube version fades out before the song or video is over, for some reason. No idea at all why it cuts off when it does, but based on the current numbers the video is on, nearly 13 million people will have been annoyed by it. God damn it, YouTube. God damn it, The Offspring.