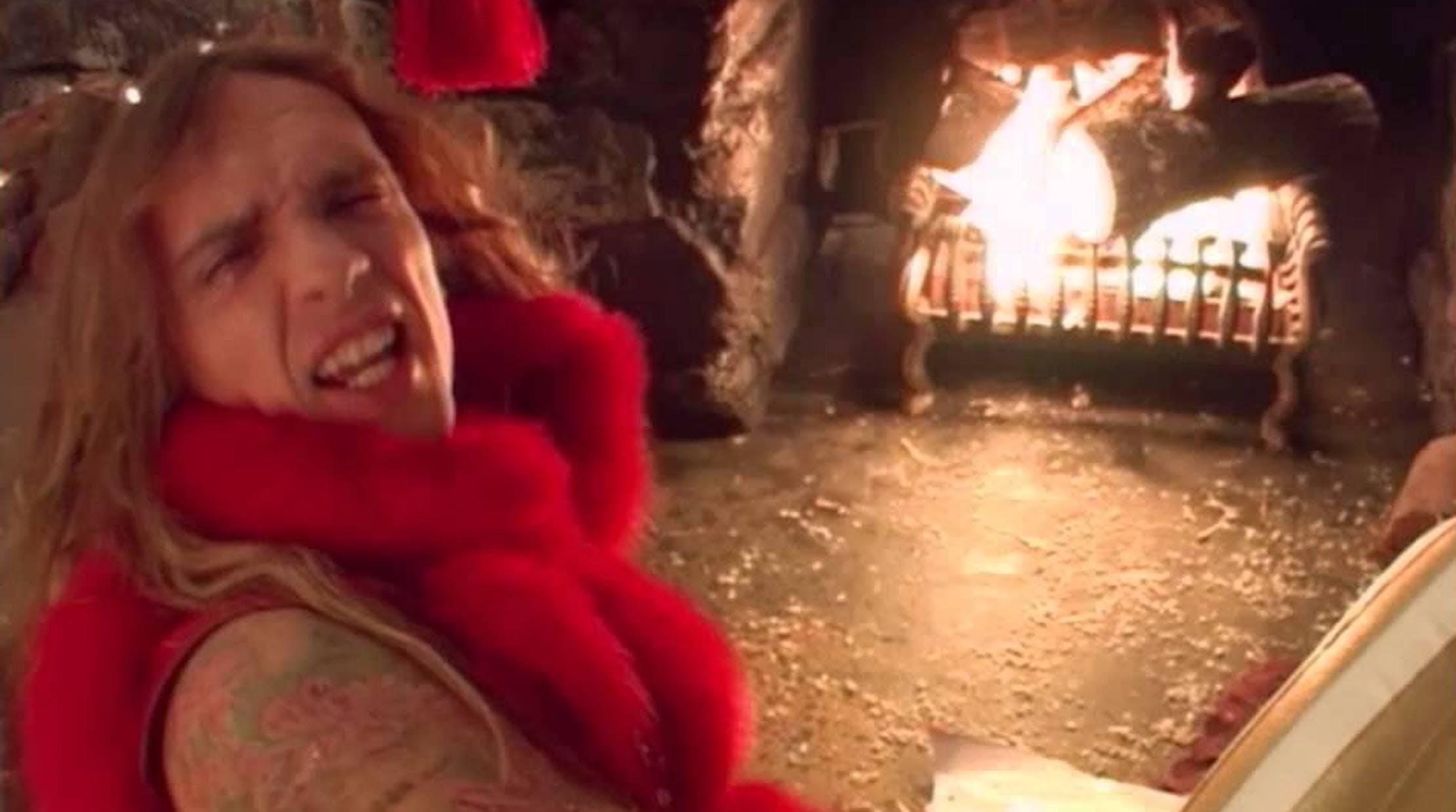 Tis the season and all that, so let us dive deeply and festively into arguably the 21st century’s greatest Christmas song, The Darkness’ glorious 2003 Christmas Time (Don’t Let The Bells End). An attempt to follow in the footsteps of festive glam classics like Slade’s Merry Xmas Everybody and Wizzard’s I Wish It Could Be Christmas Everyday, as well as get some rude jokes on the telly, it was the bookies’ favourite to hit the ever-coveted Christmas Number One spot. It was ultimately pipped to the post by Gary Jules’ cover of Mad World by Tears For Fears, recorded for the soundtrack of Donnie Darko two years earlier. While the band must have been disappointed, maybe there’s something fitting in a song based around double entendres being a Christmas Number Two. Let’s go! Ho ho ho!

00:00
It’s a snowy mountain cabin, and we’re straight in with a big glam-tastic drum intro and squealing guitars.

00:35
Due to the many things the Darkness are known for, their lyrics are sometimes overlooked, but just in these first two lines, there’s so much. The rhyme scheme is something nuts like AABCDDBC for a start: 'Feigning joy and surprise / At the gifts we despise / Over mulled wine / With you / On the 25th day / Of the 12th month the sleigh / Bells are in time / Ringing true…' Think about how much is learned from those two lines. That it’s Christmas, that the song is addressed directly to someone, that there’s going to be an element of melancholy to it and that while it will mention Christmas traditions, it might do so in a slightly askew manner. Loads going on! Also, eye glitter! Fancy.

00:47
“Don’t let the bells end” is, obviously, a reference to a colloquial name for the glans. Was the whole song written around legitimately being able to get a rude term for a rude part into a mainstream hit song? Yeah, it seems so. “We managed to get bellend into a Christmas song without it getting banned!” Justin later said.

00:50
Justin’s girlfriend in the bauble is played by his real partner at the time, Sue Whitehouse, who was also the band’s manager. After they later split up, they carried on living together for a while, before Justin and his cat eventually moved out.

00:55
'Ringpiece' is a slang term for the anus. That quote from Justin above? He followed it up with “And ringpiece!”

00:59
Is there a more heartwarming depiction of rockin’ brotherly love in any music video ever made than this: the Hawkins bros’ intertwined double-necked shared solo? It’s somehow quite heartwarming, while also clearly being extremely silly. Like, even if Justin wasn’t dressed the way he is, it would be silly. It’s easy to think Justin and Dan are both playing both necks at once, that Justin’s right hand is on the 12-string top neck, and his left hand is on the bottom six-string neck, and Dan is the other way around. But they’re not. That would be fully mad, and really hard, and just no.

1:25
One of the most remarkable things about The Darkness is that Frankie Poullain – a man in a pink headscarf and dressing gown, with a shoulder-length mullet-fro combo and handlebar moustache – is in a band in which he is not the most flamboyant member.

1:35
We can’t be totally sure about this, but if you look at Justin’s tattoo as he moves his arm, it isn’t outside the realms of possibility that he is wearing body glitter to match his eye glitter.

1:51
Ed Graham is much better at drumming than acting.

2:02
The garment Justin is wearing is deeply, deeply strange, with buckles and furry bits and all sorts. It’s hard to know what one would even Google if wishing to buy such an item.

2:11
That annoyed punch of the air is a really nice touch, but in a few seconds it is totally outdone by one of the greatest pieces of pissed-off walking acting in rock history.

2:14
That’s the one. Justin has been in a few films, and it seems completely possible that he’ll one day have a massive career reinvention. He’s in his 40s now, and could absolutely play a wacky rock dad in an ideally non-awful sitcom.

2:19
Justin, in what can only really be seen as an excessive move, owns two near-identical white Gibson Les Paul Customs, according to an interview from 2011.

2:20
Another extremely unusual garment, there. He’s dressed a bit like a saucy Soviet temptress in a straight-to-VHS 1980s spy thriller, or January Jones in X-Men: First Class.

2:28
This is the most ridiculous pair of trousers in the video, and world. There’s so much inner and outer thigh on display that you almost don’t notice the wig-like fringe at the flared ankle. There’s just a lot happening. There’s a lot of area on display that isn’t often visible on a man.

2:32
Theoretically the best thing about lace-up trousers is that you can make them fit you perfectly. Nevertheless, a quick hike up the arse is necessary before answering the door.

2:40
This choir comes from Haberdashers' Aske's Hatcham College in New Cross, London. Justin and Dan Hawkins’ mother went there for a bit, and the school has pretty impressive rock credentials.

3:03
Justin looks extraordinarily proud of himself when shouting “BELLS END!” above the choir, and fair enough really.

3:13
According to an interview in the Guardian, Justin’s “groinal” tattoo was “more enjoyable than you'd imagine”.

3:21
This is, according to someone clever on the internet who knows about such things, a Ferrari 308 GTB.

3:36
It’s all over. While they may have just missed out on the top spot in the charts, Justin and the rest of The Darkness still have plenty to be thankful for. He told The Mirror in 2013: “When I’m walking around Tesco and you can hear our Christmas song from mid-November onwards, I do hear the sound of a small pound coin entering a piggy bank in my head. Then I think, ‘Ah yes, I will buy the Tesco Finest range instead of economy.’”

God bless us, every one.