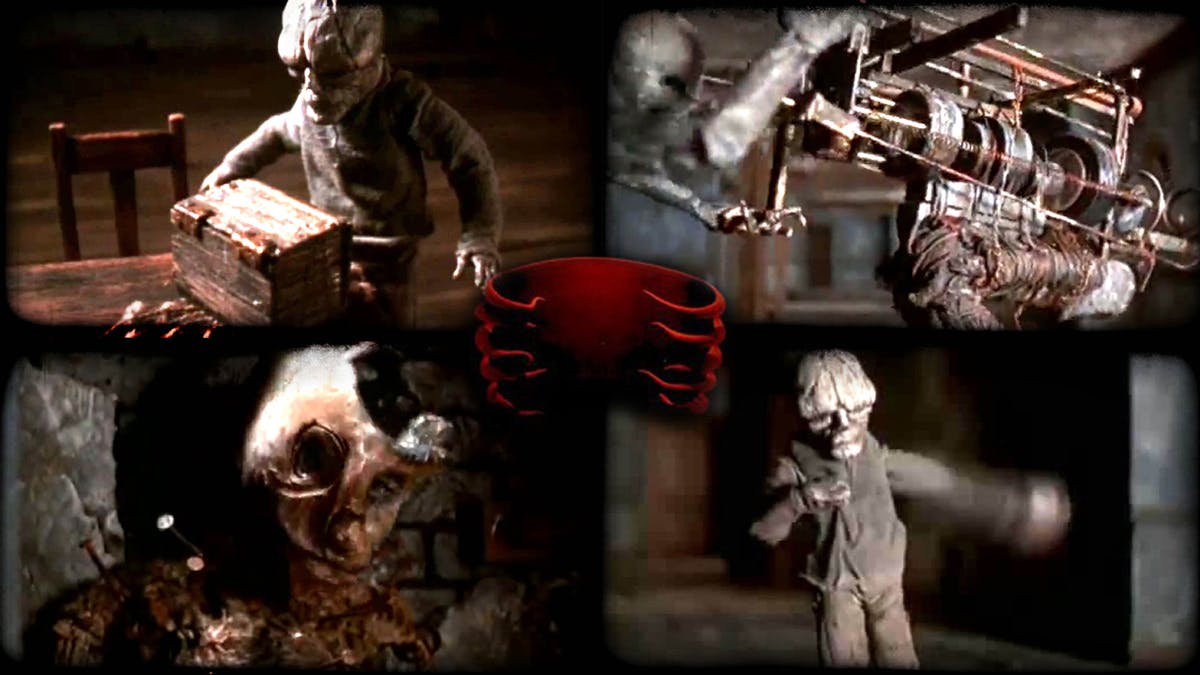 Huge yet cult, aggressively weird, extraordinarily talented, endlessly creative and wilfully enigmatic, Tool are one of those bands it can feel like hard work to get into. It’s totally worth the effort, though, and if they’re a band you’ve occasionally thought you’d probably like but never got round to, Sober makes a perfect starting point. Especially if you quite like being creeped out by odd-as-hell animation. Four mysterious dudes, one disturbing claymation figure, a tunnel made of meat, and hardly a glimpse of the band itself – fun!

Still, it was the winner of the Billboard Award for Best Video By A New Artist, so they must have been doing something right. Let’s take a look!

0.22
Nothing other than the door is moving, and it’s all a bit surreal, and that person isn’t a real person, and what’s going on?

0.31
A blurry, half-seen figure briefly appears laid over the shot as we move through a creepy-ass house. This whole thing’s creepy as hell.

0.39
That was almost definitely a guitar, meaning that was probably Adam Jones. Jones is both a classically-trained musician and an artist. Beginning in the make-up industry, he later became a sculptor and learned about stop-motion animation, something he would use in this video as well as those for Prison Sex, Stinkfist, Ænema, Schism, Parabola and Vicarious. Before Tool, he worked in the special effects industry, contributing to films including Ghostbusters II, Predator 2, Terminator 2, Jurassic Park and Nightmare on Elm Street 5. The legitimately disgusting special effects in this scene from Nightmare 5, featuring Freddy Krueger coming out of the womb, are partially Jones’ work.

0.47
A fleeting almost-glimpse of drummer Danny Carey, there. Occultist, psychedelia enthusiast and member of supergroup Legend Of The Seagullmen, Carey is supposedly capable of playing snare drum solos using his feet. Like, holding the drumsticks in his feet and doing rolls and stuff. That is insane.

0.53
Maynard James Keenan’s vocals can polarise people at first, but tend to be a case of, the more you hear, the more you like. Here is a 10-minute examination by vocal coach Beth Roars of exactly why Keenan is so good:

One of her standout comments: “It really [feels] like the bottom of a human soul.” It’s a pretty ace video, in that it goes from her being like, 'Here’s a band I’ve vaguely heard of' to pretty much planning a giant Tool back tattoo in a few short minutes. Maynard James Keenan is, in all likelihood, the most interesting man in metal. He’s been a high school wrestler, a West Point cross country runner, a military forward observer, an art student, a pet shop interior decorator, a martial artist, a sketch comedian and a winemaker. He introduced Tom Morello to drop-D tuning, and was considered as frontman for Rage Against The Machine. He portrays Billy Bob in Slave Boy, in this – let’s not beat around the bush – god fucking awful Green Jelly video.

0.55
There’s that figure again. Creepy as fuck. Guitarist Adam Jones, who has directed the brunt of Tool’s videos, did the character design for this one. “I built that creature and the "meat tunnel" and the band edited the video and did all the production” he told Guitar School magazine. “All the art for Tool is done by me and the band. The album cover is a painting I made. We were all working in commercial art and films and music. It's a very cool thing.” Jones didn’t direct this one though – that was done by Fred Stuhr. Stuhr had previously worked on other stop-motion videos like Green Jelly’s Three Little Pigs (which features Tool’s Maynard James Keenan on additional vocals) and Danzig’s Can’t Speak. He died in a car accident in 1997, aged just 30.

1.22
You hear a line like 'Jesus, won’t you fucking whistle?' and think, 'Hang on, what did he say?' and look for the lyrics in the CD booklet (well, you did when they were a thing), but nope! Keenan firmly believes that most fans won’t 'get' the lyrics anyway, so doesn't see the point in providing them. They’re on Genius though, obvz.

1.37
The song is about (and sung from the perspective of) a friend of the band’s who was only fun and creative when he was drunk, hence, 'Why can’t we not be sober?' In an interview, Jones described it: “The song and video are based on a guy we know who is at his artistic best when he's loaded. A lot of people give him shit for that. I don't tell people to do or not do drugs. You can do what you want, but you have to take responsibility for what happens. If you become addicted and a junkie, well, that's your fault.”

1.45
The chair is… levitating? What’s actually going on, then? "There really isn't a story-line, just images," Jones told Guitar School magazine. "Different people get different things out of the images. It doesn't matter what it's about, all that matters is how it makes you feel."

2.18
Stop-motion animation is amazing – that rippling of the fabric on the figure’s back is from it being moved by hand in every frame. It’s an incredibly time-consuming art form that requires superhuman patience and extraordinary planning. Some fans of Stuhr’s work managed to get hold of part of the set of this video and made a tribute to him – look at that thing and imagine it, moving bits and pieces by hand 24 times for every second of footage.

2.53
The song might be called Sober, but Keenan isn’t always. He has a vineyard and a really successful wine company, Caduceus Cellars – big enough to be the subject of a feature-length documentary with Milla Jovovich, Bob Odenkirk and Patton Oswalt in.

3.37
That bass is the work of Paul D’Amour, who left Tool after Undertow (the album Sober is on) out of a desire to play guitar rather than bass, replaced by Justin Chancellor, Tool’s sole British member. D’Amour had met Jones through also working in art departments in the film industry.

3.48
So, given that most music videos – the very basic model of a music video, in fact – tend to feature the band performing their song, where are they? Where are Tool? As well as a lot of the band coming from art backgrounds so having ambitious ideas, Keenan particularly has an unusual relationship with the spotlight. Despite fronting Tool and A Perfect Circle, he’ll spend huge chunks of gigs with his back to the audience or hiding in the shadows. The band’s live director, Breckinridge Haggerty, told Projection, Light and Staging News: "a lot of the songs are a personal journey for him and he has a hard time with the glare of the lights when he's trying to reproduce these emotions for the audience. He needs a bit of personal space, and he feels more comfortable in the shadows." He rarely does interviews and is frequently described as a recluse. But then he’ll also happily show up in silly comedy sketches, and run around on stage with a bra on. He’s an interesting guy.

4.50
This is the second video Tool did, and the last one they ever appeared in – and even then, they only show up in these fleeting glimpses. Their previous video, Hush, featured the four of them wearing nary a stitch, their thunder covered only by Parental Advisory signs.

5.00
If you’re a newcomer to Tool and have dug Sober, there is good news and bad news. The good news is, they have a lot of stuff as good as this. They’re a truly fantastic band, one that deserve all the accolades they’ve ever received, and one that seem incapable of being uninteresting. The bad news? They’re not on Spotify or any streaming services, because they simply don’t like them. This means buying music. Fucking hell.

5.05
There we go. That was Sober. Absolutely exhausting. Well done, everybody.