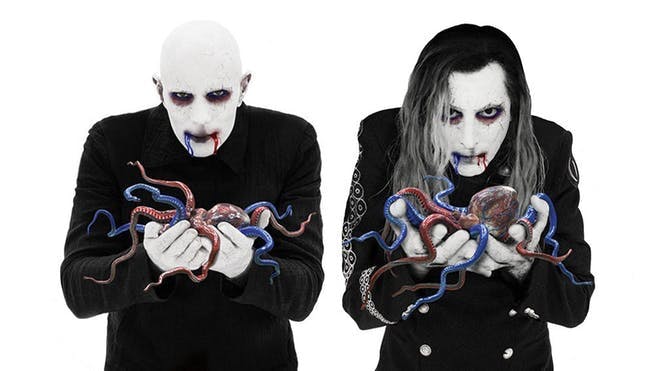 It’s been seven months since the release of A Perfect Circle’s fourth studio album. That’s quite a while to delve into a record, but a mere drop in the ocean compared to the amount of time fans had to wait since the LA supergroup’s last studio album, 2004’s politically-charged covers collection eMOTIVe, or their first two albums of entirely original material, Mer De Noms (2000) and Thirteenth Step (2003).

Given that protracted wait, upon its release Eat The Elephant was, somewhat fittingly, devoured by fans eagerly scouring for the clues (and inevitable red herrings) in frontman Maynard James Keenan’s enigmatic lyricism. What, first and foremost, does that title mean? Is it about the destruction of the Republican Party, which has one of the trunked mammals as its logo? Or is it highlighting the problems of giving oxygen to the hateful fractions lurking on the periphery? Maybe it’s a reference to both. Perhaps it’s neither.

In his interview for K!’s Icon feature earlier this year, Maynard remained characteristically evasive on the question, playfully suggesting “You never know” when presented with a particular theory by this K! writer, before describing his gripe with giving too much away. “Some things are subjective, and some things are not. Some things are logical: take a step back, take away all the grandiose stuff and the idol-worship part, and look at something practically and you’ll come up with an answer that’s fucking reasonable.”

Even several months down the line, A Perfect Circle’s guitarist and co-mastermind Billy Howerdel isn’t in any hurry to dish out too much in the way of explanations. With the imminent arrival of the LA supergroup’s biggest UK tour to date, however, he sat down with K! to provide track-by-track insights into the genesis and evolution of the songs on one of the year’s most spellbinding releases, which reveals some fascinating details on the way he and Maynard interact creatively. “I’m very proud of this record,” he says, “but I think it shines the most on tour.”

It’s in a different form now to how it was originally, but all the notes are the same. I handed a demo for it to [Eat The Elephant producer] Dave Sardy and my manager and said, ‘What do you think about this?’ It’s a song I was thinking of for [Billy’s other band] Ashes Divide. Chester from Linkin Park had texted me and asked if I wanted to co-write a song for their record. We talked about going into the studio to write, but this song was my ace in the hole, in case we didn’t come up with anything on the fly. Chester took his own life, and that event prompted me in a whirlwind of grief to finish that song. In a way it’s a dedication to him.

This song stayed in its original form from the beginning. I sat down with Maynard and we hashed it out. This one had been around a while but just had such staying power. The vocal that Maynard put down originally was just syllables, and that was such an amazing thing to me that I was almost scared of losing it. It was so compelling, this incredibly haunting non-lyrical vocal.

It’s probably my favourite track on the record. I love Maynard’s vocals on it, because it’s really unexpected. I was leaning towards using it as a film cue. When I handed Maynard the instrumental when it had been mocked up, he gave back this layered vocal that was so different from anything I’ve heard him do before. It was this sort of 60s girl band take on it.

It was in my folder for some of my film soundtrack work. I threw a lot of things at Maynard online and with this one he said, ‘This is a thing but I don’t know what’. We went from there, so I built it out. It really came together one night. It went from being this initial melody to being a long rock song. Maynard committing to working on something will make me go further. I don’t like to put a lot of energy into something if I don’t it’s going to work out.

So Long, And Thanks For All The Fish

This was a song I was chalking up to being on the next Ashes... record. It came together very organically and knew what it wanted to be, though the thing that really changed was the drums, because initially we had them in more of a marching band style. I was surprised that Maynard latched onto it the way he did. This one stayed largely the same and was in place, which was nice because it was less work.

This was a challenge because, to me, the demo was really realised. It’s one of those heart-breaking music ego problems where there’s something you really like, but Maynard had a different thought in mind, so we had to go in, rip it apart and find out what its DNA was. That was song in 4/4 but we switched it to 3/4, which, if you’re a musician, you’ll know isn’t the easiest thing to do if you want the riff to remain compelling.

By And Down The River

This song was orphaned and we adopted it on to this record. It got a bit of a 2018 massage, so to speak, which made it a little faster and more concise. We had the luxury of playing it for a few years, which made it easier to find out where it was going to go. I went into the studio and re-tracked a lot of it in about four hours.

I wanted people to hear the record before saying this, but this is a song that I wrote back in the Mer De Noms era. It’s been around for a while and Maynard was open to picking it up and seeing where it could go. He’d originally done a scat vocal on it years ago, and it was pretty different to what he ended up doing. Radiohead’s OK Computer was on heavy rotation during the making of the first record, so you can kind of hear a little homage to that. We knew we wanted to play this one live, as it’s an important song on the record. It’s a highlight of the show for me.

DLB could have taken other turns, but we ended up liking it where it was, as a breath before the kick off of the last part of the record. I felt that stepping down was a musical device to get us to where we needed to go.

A big bulk of these songs were written around 2014-15. To me, Hourglass is a very different song. I had it earmarked as an Ashes Divide song, but then what Maynard brought to it was so different. We played this one on the 2017 tour, which meant we could stretch our legs on it a little bit. It’s got a lot of energy and dynamics, so it was a complicated song to try and sequence. I think the studio version is better, but took a while to work out.

We’d played this one live before too, and used to close the show with it. Lyrically, when I first heard this song, it really hit me and it was hard for me not to tear up listening to it. I’ve never confirmed with Maynard what it’s really about, but what it’s about to me covers some of the heaviest topics. I guess that’s what music is: I can still be a listener, even though I’m in this band. This song let me disconnect from all the distractions of production and writing.

Get The Lead Out

It had different music under what Maynard was singing. The record was pretty much done, and we were going to take a break for Christmas. We were just about to wrap up, and I lifted the vocal off the old version and put it on here and started playing around with it. To me, it just worked. I could say what the inspiration was, but that might ruin it.

A Perfect Circle tour the UK in December. To win tickets to their London SSE Arena Wembley show, click here.

Billy Howerdel: The 10 songs that changed my life

With A Perfect Circle’s Billy Howerdel unveiling his debut solo album, the musician reveals his many musical influences – from Nine Inch Nails to Ozzy to the Grease soundtrack…