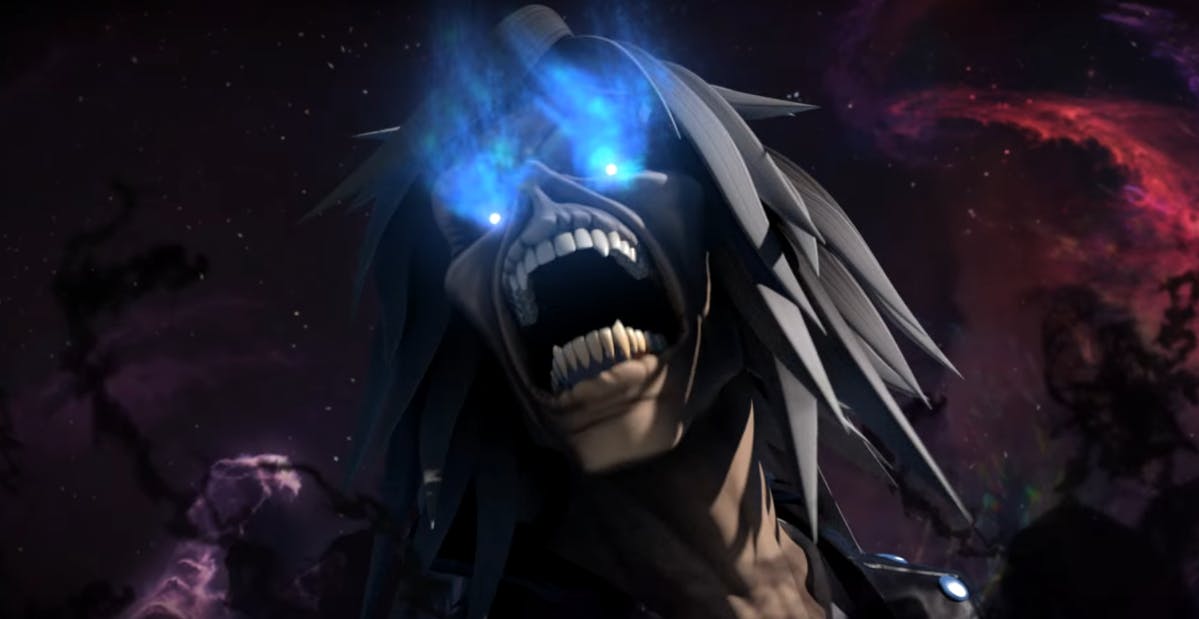 Metal music – be it particularly heavy, a little glam, or somewhere else on the spectrum (no pun intended) – has made its way into the word of video games, on and off, since the early 1980s. Here’s a timeline of notable titles bearing no little rock in their digital DNA.

Okay, maybe Journey isn’t the most rockingest of rock acts to start our, ahem, journey with here – but Journey Escape is one of the first video games to ever feature a band of any style, so here it is. Released for the Atari 2600 console, the game has the player take command of the band members, guiding them, vertically, to a “Scarab Escape Vehicle” (the same contraption featuring on the cover of their 1991 album, Escape) so as to make their next show on time. In the way: “love-crazed groupies”, “sneaky photographers”, and “shifty-eyed promoters”. Weirdly, the band’s manager is depicted, in game, as the Kool-Aid mascot. Trust us: you don’t need this in your life. In 1983 another Journey-based game emerged, this time in the arcades, simply titled Journey – it, also, was terrible, just terrible.

This Irem-made platformer, which has a hint of the Castlevanias about it, doesn’t actually have any official ties to Dio – but its heavy metal influences are clear to see. Characters are named after metal icons like Ozzy Osbourne and, naturally, Ronnie James himself, while the bands Slayer and King Crimson are also referenced. Holy Diver was never released outside of Japan, where it was available exclusively for Nintendo’s Famicom – aka the NES, elsewhere in the world.

Crüe Ball, as its name makes pretty damn clear, is quite explicitly based on the music of Mötley Crüe, and features three of their hits – Dr Feelgood, Home Sweet Home and Live Wire – rendered in a 16-bit style. Released exclusively for the Mega Drive – or Genesis in the US – this was a pinball game very much in the model of 1990’s Devil’s Crush/Devil Crash, which itself was pretty metal looking.

DOOM wasn’t a band-bearing tie-in at all – but the infamous first-person shooter’s explosive action, hellish enemies and booming soundtrack ticked a lot of boxes for metalheads. Composed by Robert Prince, the game’s music took cues from acts like Metallica, Pantera, Judas Priest and Slayer. DOOM’s 2016 reboot featured even more metal-centric sounds, written and performed by Mick Gordon, and won Best Music at the Game Awards that year. Gordon and band performed live at the ceremony, which you can watch below.

This rail-shooter was Aerosmith’s shot at making some sweet video game bucks, and for the most part their efforts paid off, with the original arcade version well received by critics and players alike. (The home ports, not so much.) A nonsensical plot involving the banning of music (and television, and video games!) is the background for several stages of blasting bad guys, rescuing bikini-clad hostages, and collecting laserdiscs. Well, it was 1994. Saving all members of Aerosmith in the game gives you a secret ending where you party with the band, and blow up their awards-laden backstage area. Classy.

This spiritual sequel to DOOM – made by the same studio, id Software – ditched the inspiration angle and went straight to the source for its soundtrack, with several pieces arranged by Nine Inch Nails’ Trent Reznor. Shit gets, inevitably, pretty damn dark. Keep the lights on, with this one.

The biggest Duke ‘em up of the 1990s was followed by a series-spanning soundtrack album, released in 1999. Music To Score By (groan) featured a mix of heavy metal and hip-hop artists, such as Coal Chamber, Megadeth, Sevendust, Type O Negative, and Wu-Tang Clan. Megadeth’s cover of Lee Jackson’s Grabbag served as the de facto theme tune to the 1996 shooter.

Terrible game, rather more terrific soundtrack. The cars-as-weapons murder-fest featured Fear Factory on its OST. Can’t say fairer than that.

This sci-fi silliness – your standard future world where art and emotion is suppressed by Bad Guys with Bad Vibes – was later adapted, in part, as the We Will Rock You musical. It looks awful – but its many Queen instrumentals, released across five game-accompanying CDs, made The eYe a valuable collectible amongst the band’s fans.

This PC shooter cast the player as Iron Maiden mascot Eddie, and sends him through several levels based on some of the band’s most famous albums. So, there’s an Egyptian level, based on Powerslave, and a deadly tour of London’s East End, riffing on 1981’s Killers LP. It’s a nice, novel bit of “bonus” content, released beside a greatest hits set of the same name, but nothing you’re going to want to go out of your way for in 2017.

The first Tony Hawk game, though? Still a kickflipping classic. The 2000-released Pro Skater 2 might have the songs we all remember best, but this is where the series started, and its musical selection isn’t too shabby. There’s Goldfinger and Primus, Unsane and The Vandals, and The Dead Kennedys' Police Truck to kick things off. A tidy precedent, indeed.

Too: Many: Colons. Kiss not only put their name to this first-person shooter in 2000, but also a PlayStation and PC adaptation/update of Kiss Pinball – the original table was manufactured in 1979. While the Pinball game was critically panned, Psycho Circus fared better. The multi-platform title was based on Todd McFarlane’s Psycho Circus comic book series, and features a Kiss tribute band with superhuman powers. Check out some gameplay below.

Never heard of it? Don’t sweat it – this action title only came out in Japan, and didn’t score or sell especially highly. Its soundtrack is notable, though, for featuring ex-Megadeth man Marty Friedman and German guitar legend Michael Schenker, of UFO and Scorpions. Check out the game’s theme tune below, by Japanese rockers Sex Machinegun alongside Schenker.

The one that isn’t Guitar Hero debuted with a setlist featuring such greats as Soundgarden’s Black Hole Sun, Faith No More’s Epic, Nirvana’s In Bloom, and Nine Inch Nails’ The Hand That Feeds. In fact, the depth of the on-disc material is super impressive – there are also Smashing Pumpkins, Kiss, Hole, Metallica, Deep Purple, Garbage and Weezer tracks to play along to. Terrific stuff.

Regularly regarded as the Most Metal Video Game Of All Time, this Double Fine-produced adventure, mixing action and exploration with real-time strategy combat, is a curious collision of gameplay styles that didn’t prove a commercial heavyweight. But its cult appeal grows and grows, no doubt aided by its starry cast – Jack Black plays lead protagonist Eddie Riggs, trapped in a crazy heavy metal world; and there are roles for Rob Halford, Tim Curry, Lemmy Kilmister and Ozzy Osbourne. Riggs himself was modelled, originally, on Lemmy, and there are definite similarities that made it through to the final product. There are 75 artists on the game’s soundtrack, from Girlschool and Mastodon to In Flames and Cradle Of Filth via Ministry and Megadeth. TBH, that rep might just be warranted.

This HD reinvention of the old, 16-bit gorefest didn’t do anything, gameplay wise, to make it a must-have – but the music is consistently rocking, the tracklist featuring Municipal Waste, Mastodon, Lamb Of God, High On Fire, Goatwhore and more. Probably just check that out, and leave the game itself on the shelf.

This PlatinumGames-produced spin-off from Hideo Kojima’s celebrated stealth series has a solos-soaring soundtrack that perfectly fits its high-tempo action. Composer Jamie Christopherson worked with vocalists including John Bush (Anthrax), Jason Miller (Godhead), and Tyson Yen (State Line Empire), as well as ex-Machine Head member Logan Mader. And doesn’t all that experience come through – few game soundtracks get the heart pounding, and the fists pumping, quite so rapidly as this one.

And it’s back to Maiden. Legacy Of The Beast is a free-to-play, turn-based role-player for mobiles, which just like Ed Hunter spans worlds based on the band’s back catalogue. But you don’t just get to play as one Eddie – you can alter his form, depending on what era of the mascot you fancy stepping into the shoes of, and his powers differ accordingly. The game features several Iron Maiden originals, as you’d expect.