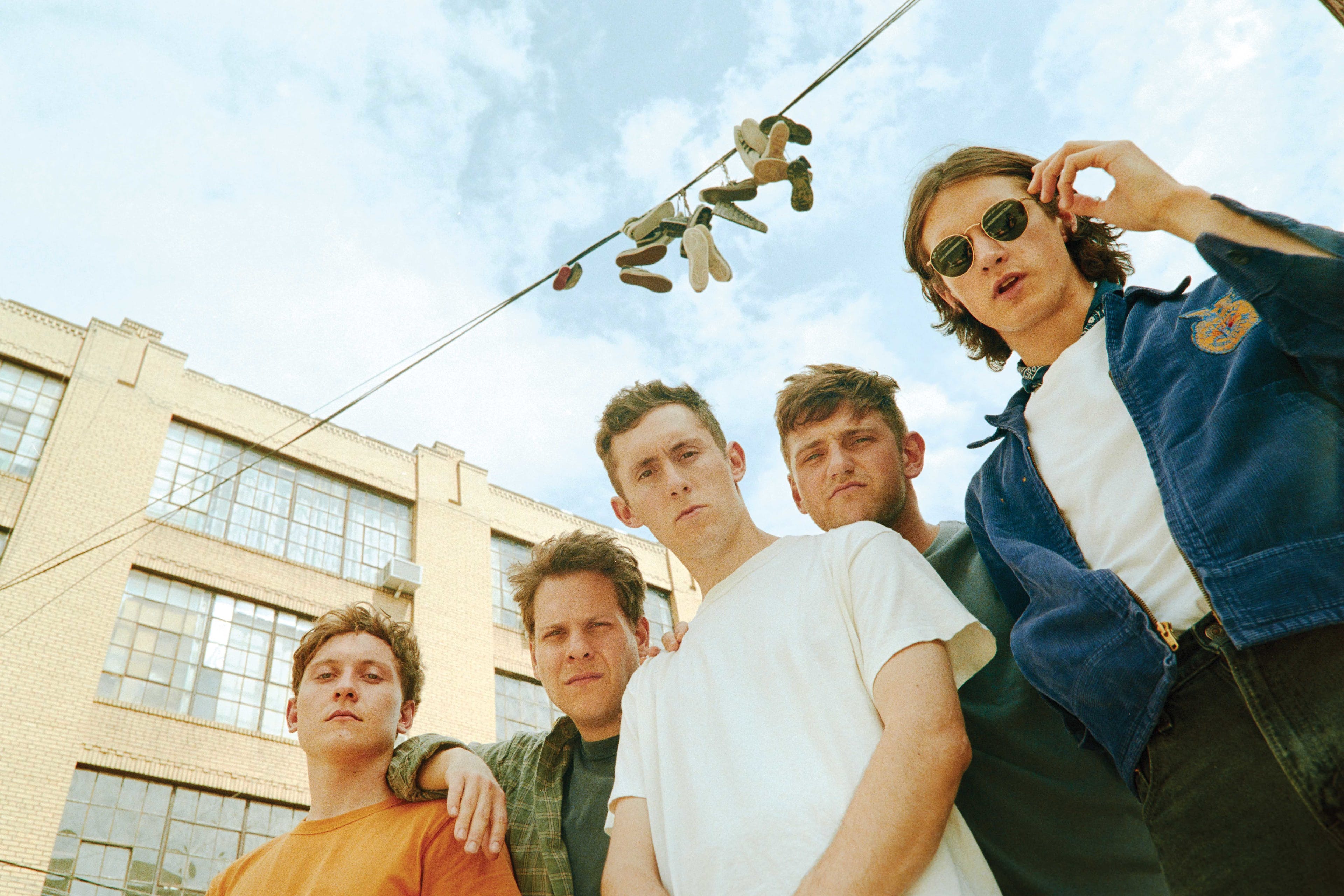 Andrew Fisher has adopted a bad Californian accent and is dishing out life advice. The singer of Basement is explaining how he came up with the title of the band’s new album, Beside Myself. Its meaning, the 30-year-old explains, comes from an idea he’s been having about being able to exit your own body and look back at yourself, so as to better understand or appreciate a situation. It’s semi-spiritual stuff. And it’s here that the frontman catches himself being way too earnest for his own tastes.

“I find it hard to just, like, live in the moment maaan,” he says in a hippy drawl.

These are the two sides that you get with Basement’s frontman. He’s as much introspection as he is sarcastic outpourings. But he’s also self-aware and careful with his words, particularly when musing on mental health. It’s the kind of maturity that you’d hope for from the guy narrating Basement’s gritty alternative anthems, their songs always flush with an intelligent, super-relatable charm.

Andrew says that Basement’s fourth record is how he’s always wanted the band to sound. It’s also the group’s first proper release through Warner Bros and Fueled By Ramen, the latter the home to Paramore and twenty one pilots. It’s a destination point that Basement have taken the long way round to get to, not helped by a hiatus in 2012. Still, 2016’s Promise Everything cemented their comeback, and has seen the five-piece’s second act playing out in rooms far bigger than their first. Now, with the release of Beside Myself, they’re ready to let go of past mistakes and enjoy where they’re headed.

Today, though, Andrew’s situation is less feel-good, as he awaits the arrival of a hurricane. The frontman is speaking to Kerrang! from his home in Richmond, Virginia, where he lives on the top floor of a townhouse not far from the city’s museum district. Florence, the name given to the tropical cyclone that is slowly making its way up the east coast of the U.S., is expected to reach the state in a day or two. He doesn’t sound worried, but explains that he’s had to keep reassuring his mum, who’s been calling a lot.

The singer relocated to the States a couple of years ago to be closer to his girlfriend, but is clearly fond of his hometown. He grew up in a small village outside of Ipswich, but it was the bigger town that he and his brother James, Basement’s drummer, would make a pilgrimage to every weekend, drawn in by the punk and (much to Andrew’s embarrassment) ska bands that frequented its creaking pubs. It was at these shows that the pair would meet the rest of their future bandmates – guitarists Alex Henery and Ronan Crix, and bassist Duncan Stewart. A natural bond was amplified as the group began playing in different bands and setting up their own shows.

Still, it wasn’t until they reached university age, with Andrew going off to study at Kent, that Basement took shape, initially as an anchor point to home as their lives headed off in different directions. “I felt a little bit separate from everyone and I missed my brother,” explains Andrew. “And I thought a really cool way for us to keep in touch would be to start a band. It kept us all together and it kept this focus on home, because we were all very homesick all of the time. It was almost like a coping mechanism.”

What started out as a way to stay in touch between friends grew substantially over the years, and by the release of their first full-length record, 2011’s I Wish I Could Stay Here, the band had enough attention to warrant packing themselves into vans heading across the U.S. and Australia. Things seemed good, but it was just a year later when the band would grind to a shuddering halt, as they announced a surprise hiatus. Second album Colourmeinkindness was offered as a parting swansong, and then they were gone.

“It got to a point where there was too much band stuff happening and not enough real-life stuff happening, and I didn’t know which one I wanted,” offers Andrew by way of explanation. The singer admits to being the driving force behind the decision, which came with the realisation that his band wasn’t paying the bills. “I knew that I didn’t want to move out of my house and live with my parents, and that seemed to be the only thing that made financial sense if we wanted to do more band stuff. At the time, in my early to mid-twenties, it felt like a back-step. So I said, ‘Maybe now is the time to take a break.’”

The hiatus is clearly something of a sore point for Andrew, but he stands by the fact that the group’s time away from the band gave them valuable real-world skills; things they can keep in their back pocket, should they need them. For him, that meant becoming a religious studies teacher at a school in East London (he’s an atheist, he adds), while the other members made moves into illustration, coffee buying, tree surgery and videography. But the time away from band life ultimately left the group realising that they’d made an error.

“Sometimes when you take time away from something, you understand it more,” suggests Andrew, “and you appreciate it, and then it kind of revitalises your focus and your love for it.”

Despite its indefinite terms, the hiatus would only hold for two years, and upon their return the band found that, curiously, their stock had risen during their time away, something that Andrew puts down to an absence-makes-the-heart-grow-fonder scenario.

“It’s weird. I get it, because people in general always want what they can’t have,” he says. “I think because we made such an insane move by announcing a record and then immediately announcing a break-up, that was probably very frustrating for people.”

It’s also a source of anguish for the singer, his concern being that the whole move may have appeared slightly cynical and orchestrated for dubious reasons.

”We feel embarrassed and bad that there were a lot of people with us from the very beginning, and then all of a sudden we’d left them high and dry. That wasn’t our intention, and it certainly wasn’t this impressive marketing tool, it was just the way it was.”

The group consummated their return with the release of Promise Everything at the start of 2016. It’s a record that has since seen them booked on some properly big rock tours with the likes of Bring Me The Horizon and Frank Carter & The Rattlesnakes, while also drawing the attention of their new label. Still, it’s an album in which Andrew can see flaws, and it’s these holes that the singer has strived to plug on Beside Myself.

“This time around we had so much more time,” Andrew reveals. “We could really hash out songs and work on them for a long time. Because there are some past records before where I’m like, ‘Why did we put that song on it?’ or, ‘I hate how that sounds.’ But that’s because we had 10 days in a studio, and we only went in with seven songs when we needed 10, and had to rush through it.”

The amount of space and time spent on Beside Myself is something Andrew emphasises, confirming that it’s the first time in their lives that Basement has been the sole focus of its members, without other jobs or schedules to plan around. A benefit of the major label might behind them is that the group have had longer stretches to write and record in places across the world, with Andrew making mention of destinations ranging from the mountains by Lake Elsinore in California, to a rural live-in studio near Bury St Edmunds. The extra time taken on this record has also afforded Andrew room to get his thoughts in order – the songs on Beside Myself being loosely about the singer spending too much time in his head, and the negativity that can come from obsessing over the past or the future. “Because you don’t experience things the way they’re supposed to be experienced,” Andrew explains. “If you’re constantly questioning stuff and you’re worried about how you’re experiencing it, you’re not actually experiencing it, you’re not just letting yourself go.”

Are you talking about anxiety and depression?

“I try not to really label it,” he says. “I really try to not to say any of those words. I’ve never been diagnosed or gone to see a doctor about anything; I don’t want to comment on how I feel without really knowing it, because I feel like that’s irresponsible. Because sometimes you can just feel down and there’s no reason for it. Whether or not that’s because there’s a chemical imbalance, or because there’s literally nothing wrong. But sometimes you just can’t feel good.”

It’s this kind of honest, considered thinking that has shaped Basement into an essential, intelligent band over the past 10 years. And as Beside Myself looks to propel the group to a new level, there’s never been a better time to join the club.

Basement's new album Beside Myself is out now on Warner Bros./ Fueled By Ramen. The band tour the UK in November. More details on that here.

Fans caught Post Malone rocking out and smiling in the crowd.

This is gonna be good.