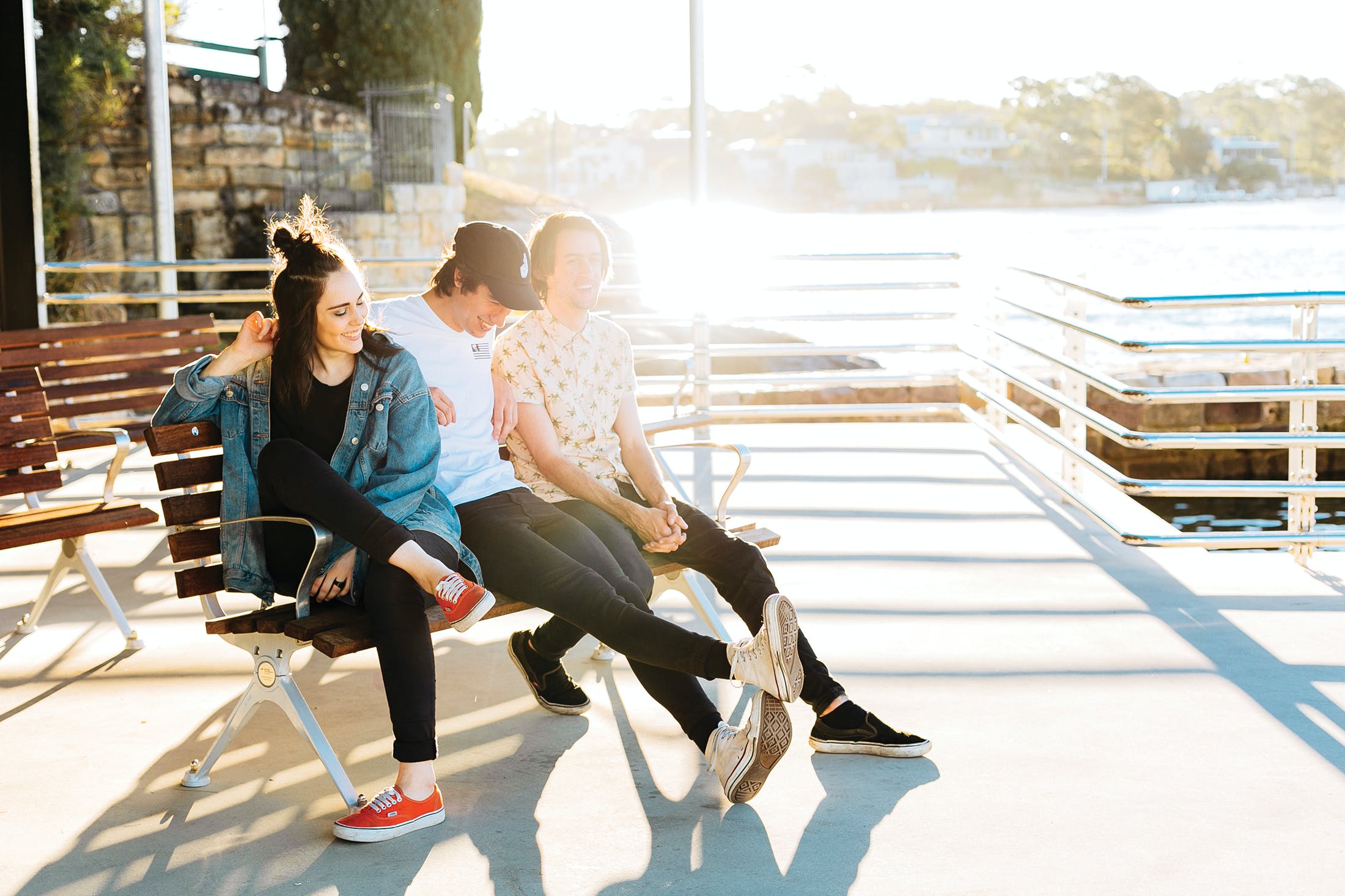 Below is a reprint of a feature from K!1722 May 19. Read our full review of Skinny Dipping in next week's issue.

Two years ago, Bonnie Fraser was having a terrible time. The Stand Atlantic vocalist and guitarist had just found out that her boyfriend didn’t want to be with her, and he had decided to move on with someone new.

It was a rejection that left her feeling shitty and used, and she reacted the only way she knew how: going out with friends and drinking copious amounts of booze, finding much-needed escape from the pain at the bottom of a pint glass.

She’s in a much better place now, though. Not only is she over that dude – a process that took pretty much a year – but also because she channelled the experience into Coffee At Midnight, the standout song on her band’s debut EP, Sidewinder.

When the five-track effort was released last September, the Sydney trio – completed by bassist David Potter and drummer Jonno Panichi – became the hottest new band in pop-punk. And it’s no wonder, since finding a new and genuinely original act in such an oversubscribed and often copycat-filled scene is like looking for lost property on Bondi Beach. And here we had one fall into our laps, fronted by a vocalist with a talent for penning huge hooks and relatable words, making Bonnie something of a one of a kind in 2018. Which means the three-piece are now out on the road living their dreams. Well, not currently, actually, as they’re at home itching to get back out on tour. Luckily for them it won’t be long until they do so, with a UK headline show, a European run alongside State Champs, and for their first-ever appearance at Slam Dunk Festival this month.

At the three-day festival, Stand Atlantic will share a bill with Bonnie’s childhood heroes, Good Charlotte, who were present when she made the decision to follow those aforementioned dreams. Sort of…

Aged 12, and sat in her mum’s house, Bonnie and her first band – who were so atrocious (she says) that she refuses to utter their name for fear of someone tracking down their old songs online – would watch Good Charlotte’s Video Collection DVD.

“We were sitting on our shitty old couch,” remembers Bonnie, “It had stains on it, thanks to our cat who had a peeing problem. And Good Charlotte were sitting on their amazing red couch, talking about how they made their music videos, and I was like, ‘It would be so much fun to do a music video.’ I just loved every aspect of being in a band. Even writing songs with my crappy band was great.”

But it was tough for a 12-year-old tomboy from the suburbs of Sydney to relate to a bunch of grown American men, which is where Canada’s premier Sk8er Girl Avril Lavigne comes in.

Avril at the Sydney Entertainment Centre, in June 2003, was Bonnie’s first concert (chaperoned by her mum), and it was life-changing. That night she witnessed a fellow tomboy onstage singing and playing guitar to 13,000 people.

Now she’s actually doing this, Bonnie states the band is “90 per cent of what I care about,” with the other 10 per cent being “dispersed amongst people in my life.” Which is why all of her efforts since 2015, when Stand Atlantic formed, have gone into making a career out of music – something Bonnie’s dad (another of her inspirations and the man who encouraged her to pick up a guitar in the first place) proved possible when he spent her childhood playing in ’80s rock outfit Swanee. And now her goal is to repay him by one day making enough money to buy him a house. She’d like to buy her mum a house too, since they’ve separated.
For now, though, she’s focusing on selling out that UK headline show they’ve got coming up at Camden’s 400-cap Assembly the night before Slam Dunk, and fulfilling the usual aspirations every new band has: seeing the world, adding to their rapidly-growing fanbase, and writing more songs that continue to connect with people.

In reality, Bonnie is a walking contraction. Ask her what she feels she brings to the pop-punk scene and she’ll say: “I dunno… I’m an alright gal. I can bring some fun. We can drink some beers and have a good time!”

Ask her to describe herself, though, and she struggles to find the words.

“What’s another word for light-hearted?” she asks Kerrang!. “Like, not serious? A joke?”

She laughs at herself as she speaks, before we offer up ‘easy-going’.

“That’s it!” she says excitedly. “Although a joke works too…”

It seems that this chilled-out nature was born from her parents being the complete opposite. With a mum “so extroverted it’s inspiring” and a “worrywart dad who’s totally not chill”, young Bonnie simply took a step back. “I was just like, ‘Who needs it?’” she chuckles today.

On the surface she appears to have it all: she’s fun, funny, and super-talented. She’s the kind of person everyone loves to be around, the perfect frontwoman and oozes star potential… but underneath it all she’s an insecure wreck, and growing up she suffered from crippling shyness.

“You couldn’t get me to do anything, it was so bad,” she recalls. “My ex’s mum made me go to an open mic night, and I didn’t wanna be there. After that, I was like, ‘Maybe music’s not for me,’ but when I got up onstage with my first band, and I had people around me, I was a lot less nervous.”

She no longer wants to vomit when stepping out to play live, but she battles daily with other pressures that come with being in a rising band. Like being expected to regularly churn out awesome new music.
“I’m pretty insecure and unconfident,” she admits. “I always feel like I’m trying to prove myself, and comparing myself to other people. I’m always doubting myself and thinking I’m not good enough.”

These are thoughts that leave her feeling ‘razzed’, which when put through Aussie-to-English translation means ‘kind of annoyed’, apparently. Not that she ever opens up or tells anyone she’s struggling.
“I don’t really voice these things,” she adds. “I just keep it to myself. It’s gotten a lot better since the band took off ’cause – and it’s sad to say it – you get validation from people’s [positive] opinions. But the way things are growing now, there is a lot more pressure, and that adds more doubt, and insecurities come up all over again.”

That high of validation mixed with the lows of feeling pressure to repeat success so far, has, it seems, left her feeling like she’s constantly riding a rollercoaster of self-doubt.

“That’s exactly it,” she says, un-furrowing her brow. “It’s just me constantly trying to top stuff and getting it in my head that, ‘Maybe that’s just the best song I’ll ever write,’ and feeling like I’ve peaked.”

Feeling like your band’s trajectory could take a downward turn at any second is a thought that’s no doubt clouded many a musician’s mind as they tuck themselves into bed at night. But Bonnie accepts that it’s all part of the deal.

“I feel like if you don’t worry, you don’t care enough about what you’re doing,” she says determinedly. “It’s important to know that everyone has their 10 minutes in the sun – or whatever the saying is – so you just have to make the most of it. We want this to last for a long time, so we try not to think about it.”

Even if the band ended tomorrow and Bonnie had to get a job in Maccas, she’d make the best of the situation, because her feet are firmly fixed on the ground. When she’s found herself in dark spots in the past – “not depression,” she says, “but times when I was so down in the dumps” – she’s always managed to pull herself out of it. It’s one of the reasons why she’ll lead her tribe with a fearlessness and fight that won’t easily be defeated. And maybe, just maybe, Stand Atlantic could one day mean as much to their young listeners as artists like Good Charlotte and Avril Lavigne meant to her growing up.

As the trio pack their suitcases for Europe and set their sights on a bright future, they can do so with confidence, despite all of Bonnie’s fears and insecurities, because she is in the best place she’s ever been. And that’s all thanks to Stand Atlantic.

“I hate to get spiritual,” she says, sounding half-embarrassed by the words as she hears herself say them, “but this band has given me inner fulfilment, if that makes sense. I’m feeling very happy and fulfilled at the moment.”

She lets out a smile and a little contented sigh. “It feels good.”