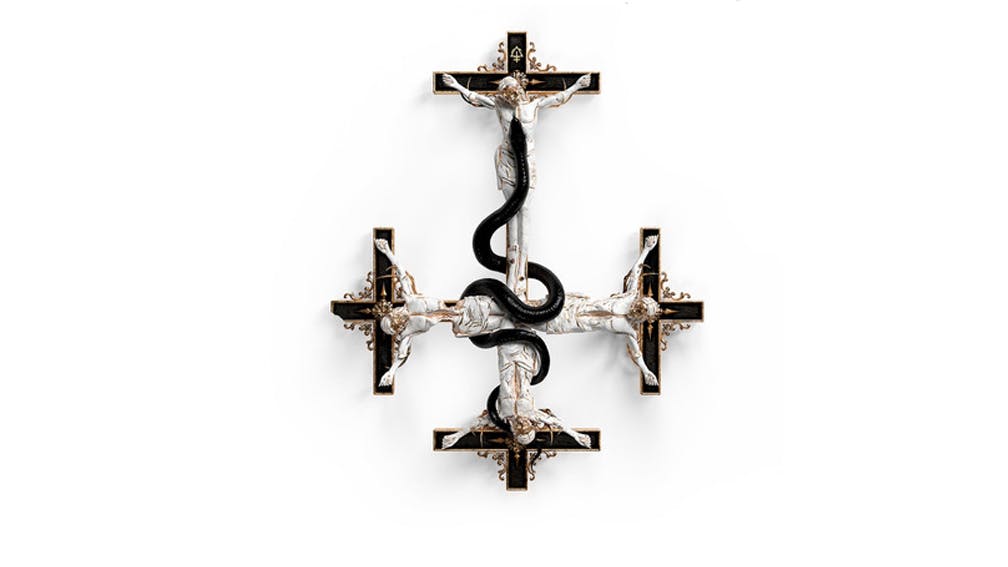 It can be easy to lose focus with Behemoth sometimes. On Instagram, Nergal is a man given to horsing around, posting irreverent nonsense, and making jokes. When he’s not doing that, he’s jogging. When he’s not doing that, he simply likes winding people up. You see a lot of what goes on behind the curtain (or inside his car). Not very evil. Not exactly the warlord he is onstage.

But when the laughter stops, they are one of metal’s most devastating and elemental forces. Headlining Bloodstock this August, the band tore through what might be the finest show they’ve ever performed on these shores. Not just for stage show (itself a flaming masterclass in illustrating metal on such a large platform), but in the power, force and energy Behemoth wield. Charged by iron will and unwavering focus, even more than has become custom for this band, it was soul-igniting stuff.

Similar can be said of Opvs Contra Natvram. In one sense, it is very much in tune with modern Behemoth – feral extremity tempered with slower bits and moments of respite, the occasional imposing section of dark, triumphant bombast. But where it becomes a conquering work is in how imposingly it stands, how everything is done with the imperious confidence of a band with the keys to the Death Star. It says: we are Behemoth, fuck you.

When they go for the throat, Behemoth are as vicious as they’ve ever been, violently surging through Malaria Vulgata and Disinheritence with a formidable clarity of purpose. But it’s in the less blasty moments – where Nergal says the listener is afforded “a breather” – that Behemoth are at their most majestic here. Ov My Herculean Exile has an anthemic quality not unlike Satyricon’s Mother North, while Off To War! Is less an act of attrition than its title suggests, a song intended to ensnare the listener and bring them to its cause, rather than beat them into the ground. Thy Becoming Eternal is a work of two halves, entering with murderous intent, before a chilling atmosphere descends, and victorious closer Versus Christus is a mighty companion piece to O Father, O Satan, O Sun! from The Satanist.

The force with which Behemoth do all this is brilliant. It fuels everything they do with an energy so often missing from music this extreme: genuine excitement. And that’s the point: to burn incandescently, with the thrill of doing something powerful, of artistically having no chains and finding yourself soaring. Nergal once countered an opinion that the music his band play is morbid, obsessed with death, “To me it is the opposite. It is vital. It’s full of life.” Rarely has that statement rung as true as it does here.

Opvs Contra Natvram is out now via Nuclear Blast