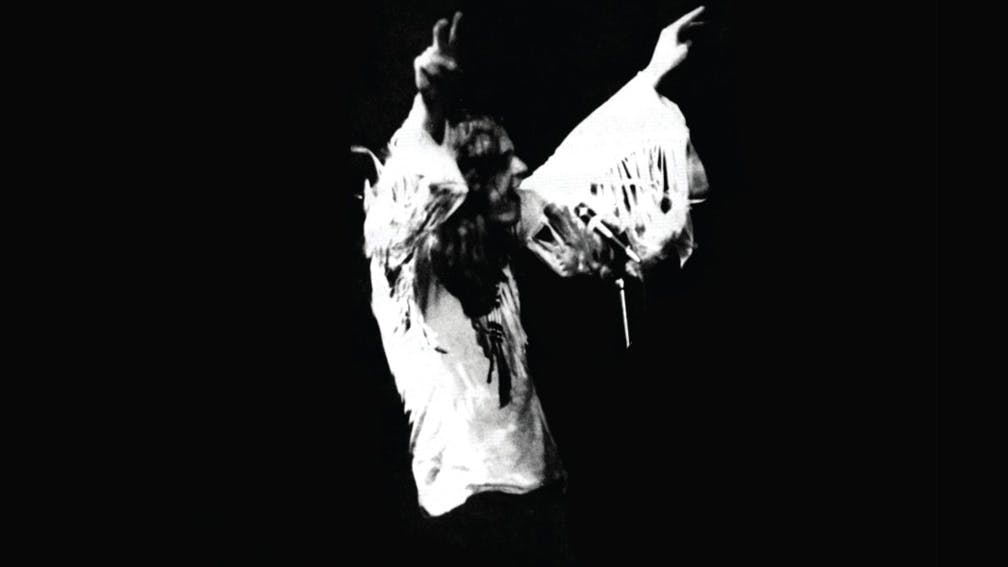 It was moments before going onstage at the Los Angeles Forum on October 7, 1971 that Tony Iommi first tried cocaine. Handed a wrap of the stuff by a roadie, the Black Sabbath guitarist was assured that, “It’ll help you concentrate,” a promise confirmed when he went on and later claimed that his playing that night was like that of a god.

Almost exactly two years previously, Tony and Black Sabbath had pulled up to London’s Regent Sound studio en route to a gig in Europe in their knackered old van, which the guitarist had driven himself, to quickly bash out the tracks for their self-titled debut album. Now here he was in La-la-land, with three albums to his name, 17,000 people waiting to see him, a limousine outside the venue and a load of this new wonder drug inside his nostrils. Where, he presumably wondered, did it all go so right?

The following September, Tony passed out during a show at the even bigger Hollywood Bowl, shortly before the album's release, burnt out by a mixture of heavy touring and heavy indulgence, largely coke. It was a fitting start to the Vol 4 period, blizzarded as it was by cocaine, fuelled by cocaine, inspired by cocaine, performed and recorded under the influence of cocaine, and resulted in an album that, with its thanks to “The great COKE-Cola Company of Los Angeles” in the sleeve, was dedicated to cocaine. Not a familiar temptation in the pubs of Aston, Birmingham, in America Black Sabbath, already keen on booze, weed, acid and whatever else you had in your pocket, took to gak like ducks to water.

This new, more glamorous variety of excess wasn’t the only way in which Sabbath’s fourth album marked the turning of a corner for the band. Having constructed much of the material for their first three records from ideas formed during lengthy jams at shows, especially during their tenure at Hamburg’s Star Club where The Beatles had also done time, their riff cupboard had become somewhat bare. Thus, when they set up camp at a mansion in Bel-Air to record their new opus, it would require much more songwriting time than previously. Flush with fame and money, the band managed to spend $75,000 – $15,000 more than the recording budget – on coke, which they took in such quantities that it would be delivered in soap powder boxes. But these resources also meant that the band were able to exercise their creative muscles with far fewer limitations on them than had previously been the case.

Thus, on Vol 4, there was a far wider scope to things than on the doomy Paranoid, or the bonged-out Master Of Reality. Cornucopia and Under The Sun boasted trademark bottom-end Iommi riffs, but elsewhere there were more twitchy, upbeat moments like the groovy Supernaut, epic opener Wheels Of Confusion, and even a piano ballad in Changes. But there’s also a shine to everything on Vol 4, an energy that makes Tomorrow’s Dream and Snowblind (the most obvious drug song, in which Ozzy whispers an unsubtle ‘Cocaaaaaine’) arrive far more swaggering and confident than previously. Then Sabbath had been good. Now, they seemed to say, we’re fucking great, motherfuckers.

This mega reissue brings together just about all the Vol 4 one could ever need. As well as a remaster of the album itself, there are alternate takes of the songs lovingly remixed by Porcupine Tree genius Steven Wilson, studio outtakes, and a live album comprised of recordings from various shows on the band’s 1973 UK tour. It’s these extras that make this box set worth getting for Sabbath-heads. The Steven Wilson remixes are superb, a collection of alternative versions of the songs that are worth it for the curiosity factor alone. The outtakes, meanwhile, capture false starts, studio chat (“What’s this one called?” asks the engineer at the start of Wheels Of Confusion; “Bollocks,” replies Ozzy), and run-throughs that collapse halfway through. It’s a niche curio, but a window into the studio of one of the greatest rock albums of all time, nevertheless. As for the live stuff, the band are simply on fire, heavy as hell, and completely in the zone throughout.

And it’s in this quality that these extras underline just what a band Black Sabbath were at the time. Already a group who could turn it on and get into the groove at the flick of a switch, that the studio stuff sounds so close to the ‘canon’ versions is testament to how strong the musical core of the band had become. The live stuff, meanwhile, amply demonstrates just how different they were to their peers in Led Zeppelin or Deep Purple, or forebears like The Beatles or The Rolling Stones – they were really heavy, the rhythm section of Geezer Butler and Bill Ward was positively elastic, and coke or not, they now had a confident energy that lightninged out of them constantly.

It would be this that propelled Sabbath on to even greater heights, and solidified them as not just one of the biggest, but also the most important bands of their time. In years to come, the drugs would clearly not always work, to the point where, creatively bereft and fed up, the band fell apart. But when they did, they attached a rocket to something already great, and resulted in something genuinely magic.

For Fans Of: Deep Purple, Queens Of The Stone Age, Soundgarden

Vol 4 Super Deluxe Edition is released on February 12 via BMG.