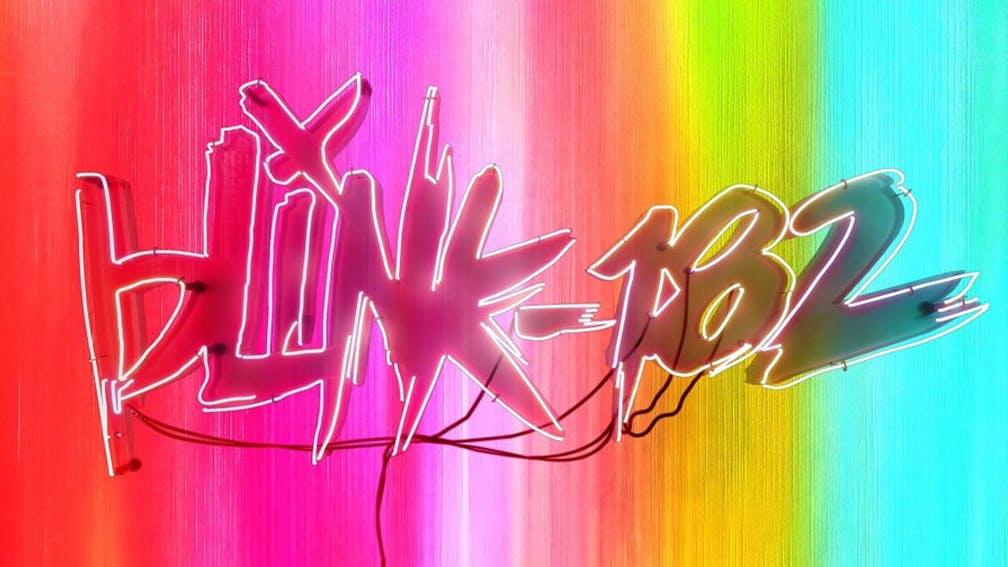 It perhaps says a lot that there are no joke songs on blink-182’s ninth record. Fans of the dependably juvenile Californians have learned to watch out for the inclusion of these tracks – often über crass and played extra fast – with every release from the trio since the early ‘90s. These were songs with titles like Fuck A Dog, Blow Job and Happy Holidays, You Bastard, and they would somehow manage to lower a tone that was usually already not that high. Even the band’s last record, 2016’s California, featured two joke songs, including Built This Pool, which, clocking in at just 17 seconds, had bassist and last remaining founding member Mark Hoppus sing the one and only line, ‘I want to see some naked dudes, that’s why I built this pool’.

But ahead of the release of NINE – so-called because, according to Mark, it’s the band’s ninth release, despite protestations from some that 1994’s debut Buddha isn’t canon – the bassist shared the news with fans that this release would be a joke-free zone. It’s easy to see why. In what is the biggest tonal shift between two blink albums, NINE finds Mark opening up about his own anxieties and depression, along with growing concerns about the state of the world and the way that social media helps beam a never-ending scroll of the worst of humanity right into your home. It’s undoubtedly a more mature offering from the group, and so a song about your grandpa eating seven hot dogs and shitting himself wouldn’t really fit in.

This meatier and more personal side to blink takes many forms as the album’s 15 songs play out. Opener The First Time, a track that bobs and weaves with a restless energy, intertwines a dizzy yearning for youth around stark images of self-medication. Meanwhile its follow-up, the hook-heavy Happy Days, finds Mark reliving private battles of self-doubt. ‘Hey kid, don’t listen to your head / It only fills you with dread and with doubt / Left lookin’ for an easy way out’, is how he puts it, before the song reveals its true message that, in the end, there are always better days ahead to look forward to when you’re stuck in a rut.

The band also leave introspection behind and face down wider social evils on moments such as the surging Heaven, which was inspired by the Thousand Oaks shooting in which a gunman opened fire on a country-and-western bar popular with college students in California last year, killing 12 people. Then there’s the morose Black Rain, which singer and guitarist Matt Skiba – who feels more at home on this album, this being his second since replacing founding guitarist Tom DeLonge in 2015 – has said he wrote with victims of abuse at the hands of the Catholic church in mind.

With all this to digest, perhaps what’s most impressive about NINE is the way in which blink have managed to deal with all this dark matter without the record becoming a total downer. The band have knowingly borrowed lightly from the same sonic template as their 2003 untitled record, favouring understated tempos and weird, sideways hooks in place of the usual high-tempo punk drive. And while there’s perhaps nothing on here as creatively diverse as songs like I Miss You or Down from that album, it gives this material a rich personality that keeps them interesting and, ultimately, still fun and uplifting. Whether or not this slightly grown-up iteration of blink lasts more than this one record remains to be seen, but on NINE it feels like the band are finding a new lease of life in the dark days of 2019.