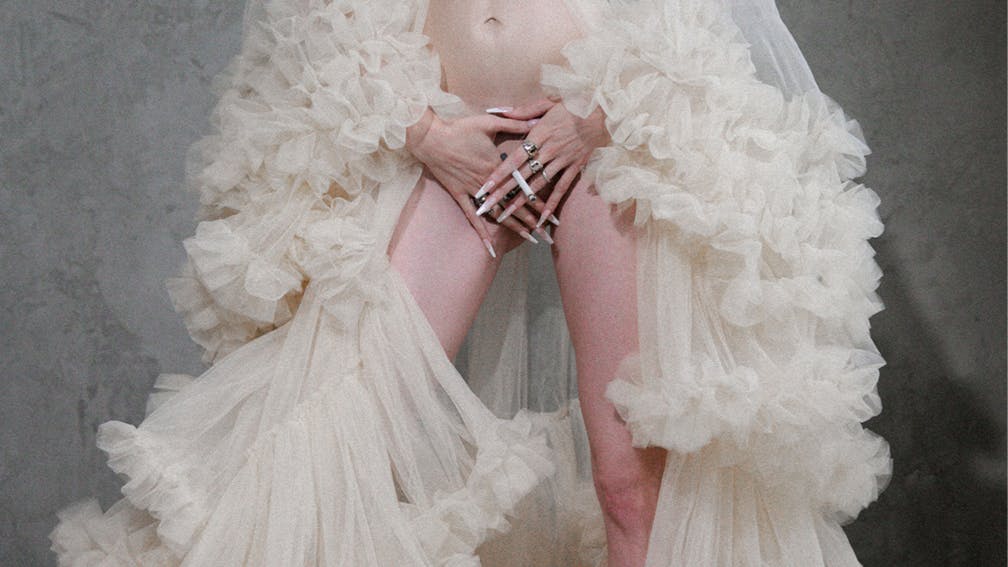 For those whose Latin is a little rusty, ‘Dentata’ means ‘toothed’, and this debut album from former Dentata member Dana Dentata certainly packs plenty of bite. Everything about it seems to be confrontational, in fact, from a title that skirts just the right side of ridiculousness, to tracks that smash the listener in the face over and over again. But in a good, occasionally bizarre and always intriguing way.

So much is happening in the opening track alone, which opens with the words from a wedding, presumably celebrating the union of genres being harnessed here, industrial riffs and rap bars chief among them, before what sounds like a funeral and a resurrection. So what on earth is going on? Who knows, but it’s never boring.

Listening to Church Hooker and Spit (featuring Travis Barker), Dana sounds like the evolution of the shock-rocker. But rather than dealing with difficult subject matter in kitsch, catchy ways like the practitioners of yore, her delivery is as abrasive and hard on the ear as what she’s writing about, lurching out of the darkness to reveal her own. This makes for some unsettling moments, such as I Know What You Did Last Summer, punctuated by an off-kilter whistle throughout; or Happy Family, on which Dana seems to be portraying multiple personalities as a family unit living within her.

The DD approach seems to involve hitting the listener with everything, grubby kitchen sink and all, which can get a little dizzying, so it’s a relief when Free arrives. And while the respite is only musical, the slowly picked acoustic backing some truly excruciating admissions, it provides a small degree of variety.

Pantychrist is an exhausting listen, but it’s supposed to be. It’s the sound of weaponised experience, of survival and endurance, which shouldn’t be easy on the ear or readily digestible. It should make you uncomfortable. In that regard, then, Pantychrist is a searing success.

For fans of: Ghostemane, Ho99o9, In This Moment

Pantychrist is released on September 3 via Roadrunner.

READ THIS: Poppy: State Of Flux

“This is my purpose and why I’m still alive”: Dana Dentata reveals the pain behind Pantychrist

On debut album Pantychrist, Dana Dentata channels the trauma of her formative years into hyper-aggressive shock-horrorcore. But rather than wallowing in misery, it's a record of empowerment. Here, Dana shares her story and why she'll never compromise her art. Trigger warning: Sexual abuse.

The 6 new artists you absolutely must see at ALT+LDN

Don't know where to start with ALT+LDN's thrilling blend of hip-hop and rock acts on the line-up? These awesome six artists will do the job on Monday…