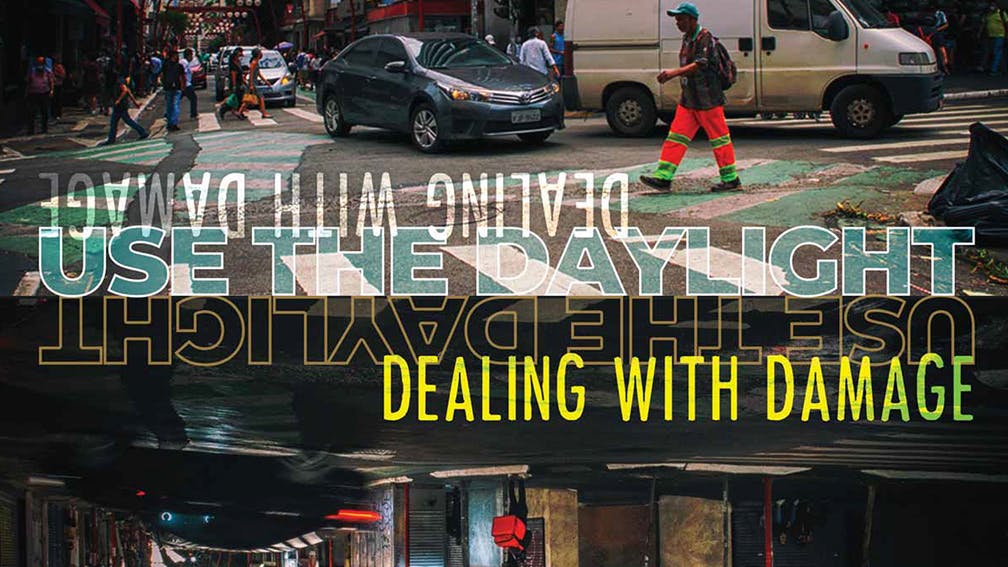 The four men who make up Dealing With Damage have been involved in this country’s punk scene for decades, but Use The Daylight might just be the best thing any of them have done. Their sound evokes both the classic Washington DC sound and the comparatively underrated strain of melodic UK hardcore that followed in the wake of U.S. bands like Hüsker Dü and Dag Nasty.

To write a tune reminiscent of Fugazi, and then give it the same name as a Fugazi song, might seem somewhat foolhardy. But Instrument, along with similarly Dischord-adjacent tracks like We Make Bombs To Feel Safe and First, They Ignore You, finds the band stamping their own identity on such heavyweight influences, while the irresistible Rinse Repeat Rinse harks back to the sublime catchiness of Dinosaur Jr or Mega City Four.

If these are examples of DWD playing to their strengths, what makes this second album such a treat is the way they’ve skilfully expanded their ambition. A whopping fifteen tracks allow for experiments and excursions, while samples and thematic links make Use The Daylight a unified work rather than just a collection of songs. Meanwhile, the vocal interplay between guitarists Ed Wenn and Andy Myers is more intricate and effective than ever.

Songs like Bigots Vs The Mad Professor take aim at deserving targets, but the overwhelming message from Use The Daylight is more positive. A lost friend is remembered on John’s Gone, a driving tribute to punk producer and onetime Understand guitarist John Hannon, this album highlight just one example of Dealing With Damage encouraging us to make the most of our potential - something they’ve done here brilliantly.

Use The Daylight is released on January 27 via Little Rocket