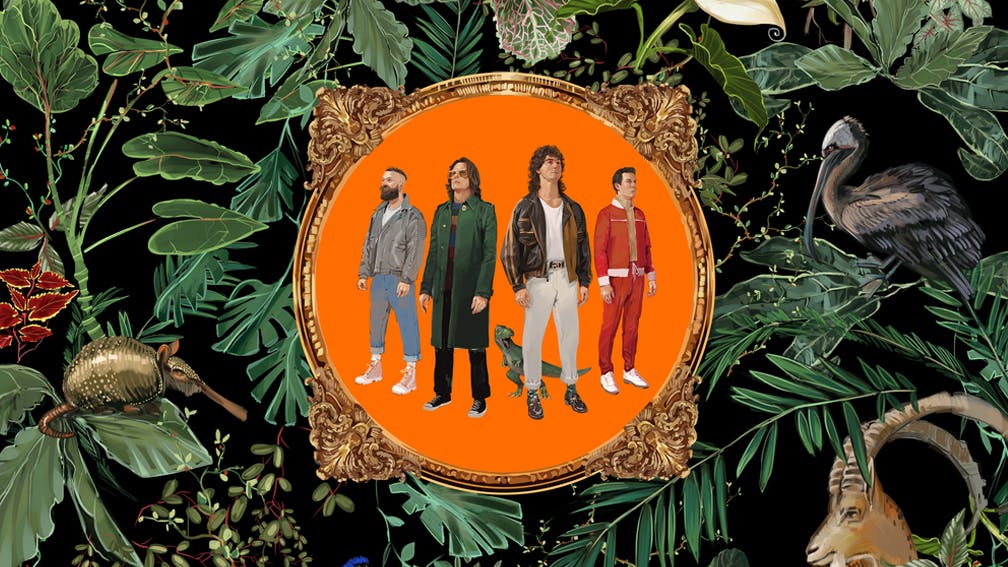 Earlier this year, Don Broco frontman Rob Damiani announced he’d be trying his hand at boxing by stepping into the ring with a prize fighter named Dave ‘White Rhino’ Allen, leaving many of us wondering if he’d lost his senses and how much of an impediment his lustrous mullet would prove in the ring.

Luckily we didn’t have to find out. We now know it was just an elaborate ploy to tease the release of the video for Gumshield, the suitably knockout opening track from Amazing Things. It was an innovative piece of marketing, to be sure, and further proof that Don Broco have never gone the easy route with anything, including success. They’ve always felt like a band out on their own, occupying a unique pocket, accumulating styles over time rather than pinballing reactively between them. They started out as a rock band who didn’t look like a rock band (Priorities); then they looked like a rock band but didn’t sound like one (Automatic); now they look and sound like one while doing all they can to broaden and deepen their output. With Amazing Things they’ve taken the logical next step on from 2018’s Technology and ended up somewhere more musically creative and thematically curious.

Over time Don Broco have developed a fascinating brand of high-low cultural relativity that reaches its peak on Amazing Things. So while the song Uber is, on one level, about a group of guys heading out for a tense cab ride, it’s also a furious diatribe about perceived allyship to racism by virtue of being white. Rob’s anger isn’t how he acted in the moment the real-life incident took place, but what he felt in hindsight, partly fuelled by disappointment in himself, realising his silence in the face of bigotry may have been mistaken for endorsement. A year on from George Floyd’s murder and the rise of the Black Lives Matter movement, it’s an important reminder that it’s not enough to be non-racist, we must remain vehement in our anti-racism – and not just when the topic is dominating the news agenda. The COVID-19 related delays to the album make for at least one other powerful piece of listening; Blasting Swimwear Season – a song about the delusion of ignoring climate change – during an unnaturally mild October makes for a rather uncomfortable piece of synchronicity.

One could argue that Amazing Things is actually a concept album of sorts, with an overarching narrative about the self-examination and self-flagellation that goes into making a record. It’s a theory given credence by just how interrelated the writing of many of the songs were from one another. While Uber provided the inflammatory kindling for Amazing Things, Anaheim finds Rob wrestling with his obligations as a songwriter in the aftermath of that incident, pondering how he should and shouldn’t be using his platform as an artist. One True Prince subsequently sees Rob chide his own inflated sense of importance, recognising that he’s just one man in a band of four commenting on issues that affect billions.

Surprisingly, Don Broco contemplating our insignificance in the world makes these songs more, rather than less, important because of the band’s awareness they only get this shot once and empathy and entertainment don’t have to be mutually exclusive. If this makes Amazing Things sound amazingly serious, it is, but not all the time. Some tracks are exactly as they appear to be and have no hidden depths or layered social commentary. Bruce Willis, for example, is simply an exercise in wish fulfilment from a vocalist desperate to get a catchphrase from one of his favourite films into a song. It may well also be the rowdiest thing Don Broco have put their name to.

Fascinating themes are thankfully paired with similarly captivating music, blending styles and unusual instrumentation with the abandon of a band tossing caution into a hurricane. It’s done so deftly, in fact, that in the context of the full album, Manchester Super Reds No.1 Fan, the first single, sounds awkward and jarring next to other, sleeker beasts that pack a more nuanced punch. It’s still powerful, of course, though arguably more for its comments on toxic fandom.

Amazing Things concludes with Easter Sunday. Inspired by the tragic human cost of COVID-19, specifically drummer Matt Donnelly losing three uncles within the space of a month to the virus, it makes for a heartbreaking listen, gradually building to an agonising crescendo. It’s a very different side to Don Broco, one of many showcased by an album that’s full of colour, emotion, vibrancy and uninhibited imagination.

Amazing Things is about being alive during trying times, of dealing with global pandemics and culture wars, face to face hatred and online abuses, but it meets those challenges with hope in its heart and fists full of the year’s most urgent and unusual tunes. Get ready to be amazed.

Amazing Things is released on October 22 via SharpTone Records