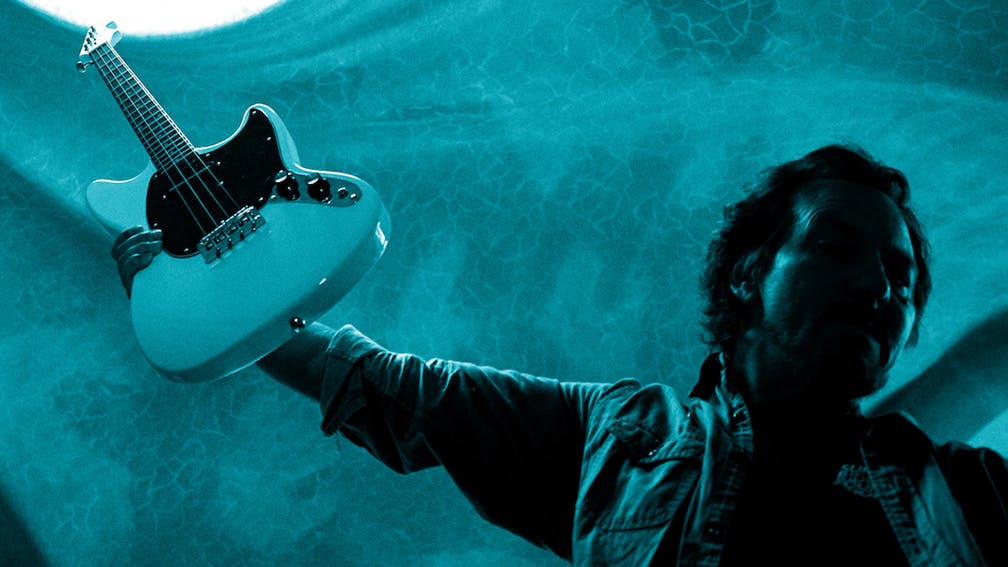 You probably think you know precisely what Eddie Vedder’s new album is going to sound like. To date, the Pearl Jam legend’s two solo excursions have been exercises in quietude, the first being the searching beauty of 2007’s Into The Wild soundtrack, the other the tranquilised beach-core of 2011’s Ukulele Songs. It takes all of about 10 seconds of listening to his latest brilliant extracurricular outing, Earthling, to realise he’s very much ’Ed-ing in a different direction here. As opener Invincible rises from a bed of keyboards, we hear him not singing, but rather talking. ‘Are we clear? Cleared for liftoff… Are we affirmative… No negatory!’ he says like an overly-eager pilot before the drums crash in. It’s all a grand precursor to one of the most uplifting rock songs in recent memory. Welcome aboard Air Vedder, people.

Ahead of its release, Eddie spoke of constructing Earthling’s tracklist like a concert. “The special guests come out at the end,” he told the New York Times of how he deployed Elton John, Ringo Starr and Stevie Wonder on an album that also features Red Hot Chili Peppers alumni Josh Klinghoffer and Chad Smith, not to mention his daughters Olivia and Harper on backing vocals. Indeed, this is a record that plays like Eddie’s soul is plugged directly into a jukebox skipping through different eras of music history. Excellent lead single The Long Way, for one, summons the late, great Tom Petty, and even enlists Heartbreakers keyboardist Benmont Tench. If this all sounds very pleasant, such instances are counterbalanced with serrated rock. Rose Of Jericho pairs a choppy riff with references to Henry David Thoreau while Good And Evil ends with a blast of fuzz that will rattle your speakers. Both, it should be stressed, come directly after the hushed elegance of The Haves.

In case you haven’t got the gist by now: there’s simply no way of knowing where Earthling is going next – be it in sound or mood – at any given time. All of the musical spontaneity may well alienate some, but its eclecticism is its greatest asset. Special credit here must go to producer/instrumentalist Andrew Watt (Miley Cyrus, Ozzy Osbourne) for shepherding all of this musical roving in such a glorious fashion. There are a number of contenders for Earthling’s most WTF!? moment. The brilliant Try features Stevie Wonder delivering a wild harmonica solo over a scrappy punk riff. No, seriously. Another comes as Eddie and Elton John – Goodbye Yellow Ledbetter Road, etc. – unite for the free-spirited duet Picture. Its gleeful piano rock in turns tees up Mrs Mills: a song about a piano that rocks. Part music history lesson, part love letter, Ed tells the story of artists who’ve used the titular piano at Abbey Road Studios, including The Beatles. Which is handy, as Ringo Starr plays drums on it. It’s a wonderful concept, one that bestows more romance upon an inanimate object than most singers conjure for their significant others.

Earthling’s greatest moment comes with Brother The Cloud, which begins with the haunting declaration, ‘I had a brother, but now my brother is gone.’ In a recent interview with MOJO, Eddie reflected on the loss of his sibling in an accident and how the track started out as “non-fiction” before turning into “fiction”. The manner in which it conveys all the disorientating emotions bound up in grief is only heightened by its shift from dazed intro to furious final section. ‘Put your arms round my brother, my friend, say for me… for me… fuck you… What are friends for?’ Ed howls. It will leave you transfixed. And so will Earthling’s parting gift.

The album saves its biggest surprise star for last. As On My Way begins, you hear a crooning voice that seems at once familiar yet alien, like Eddie’s but not. It is, in fact, his late father Edward Severson Jr. – he at the epicentre of all the paternal trauma of Pearl Jam’s classic Alive – his voice having been salvaged from old recordings. As a snippet of these vocals sound out, Ed puts his pilot cap back on and resumes the radio transmissions that started the album. For the casual listener it will be a dreamy, lullaby-like end. For those well-versed in the annals of Pearl Jam legend, it will be enough to set your tear ducts to sprinkler mode.

And you thought you knew what Eddie Vedder had in store for you this time around...

Earthling is out now via Seattle Surf/Republic Records