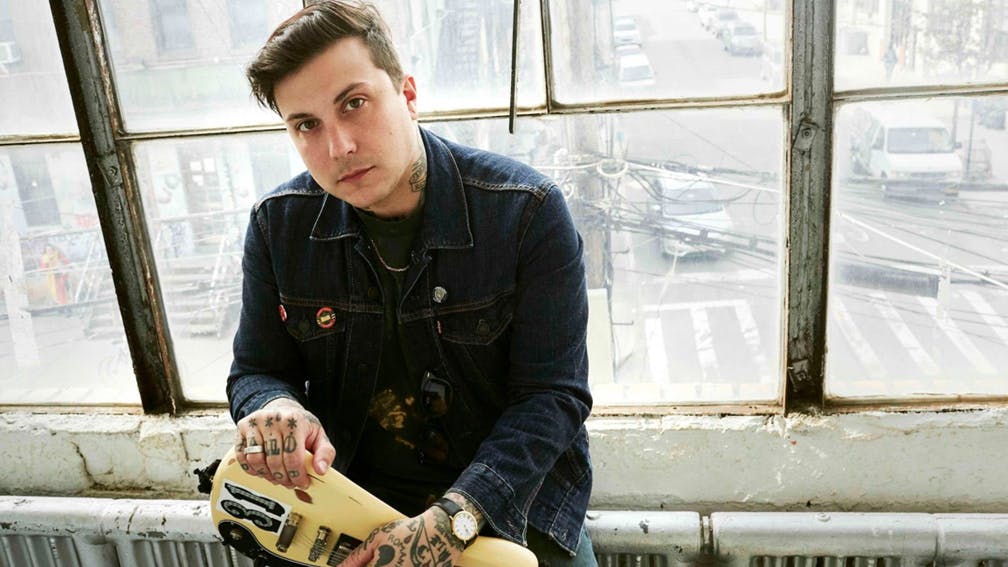 Frank Iero is a deeply existential kind of guy. Launching the latest chapter of his solo career in March with a song titled Young And Doomed, the 37-year-old starkly confessed in his dark-but-epic 2019 comeback single that, ‘Most of the time I’m convinced I survived / And that’s fine, but it’s far from ideal,’ while also admitting that, ‘It keeps me awake at night / The realisation that I might be a drag no-one wants to inhale.’

This has been a prevalent theme in Frank’s lyric writing for quite some time. Since the first of his post-My Chemical Romance records under the now-staple ‘Frank Iero And The…’ banner arrived in the form of the marvellously messy Stomachaches in 2014, the New Jersey native has been examining how ‘I’m insignificant’ (on Joyriding), while also pondering how ‘Most days I can’t believe I’m still here’ (on .tragician.). Released as frnkiero andthe cellabration, though, this debut LP proved that even while spilling confused thoughts out on to paper, he could still put a tongue-in-cheek perspective on gloomy subject matter. Second full-length, 2016’s Parachutes, followed in a similar vein. It cemented Frank as the master of turning ugly feelings into music that’s beautiful, joyous and even celebratory.

The difference here on album number three – Barriers, under the guise of Frank Iero And The Future Violents – however, is that these poignant observations and questions have not only never sounded so prominent; they’ve also never felt more real. The first new music since he and his former bandmates in The Patience were involved in a terrifying bus crash in Sydney, Australia, Frank’s 2016 near-death experience has informed much of the content of Barriers, both literally and metaphorically. Though it was born from life-changing events, however, that fateful day Down Under is never allowed to define it.

This is largely thanks to just how interesting each of the 14 songs here sound. Joining forces with guitarist and long-time musical partner-in-crime Evan Nestor, plus bassist Matt Armstrong, drummer Tucker Rule, and Kayleigh Goldsworthy on piano, organ and violin, Barriers is the result of Frank’s decade-plus vision of working within this exact line-up coming to fruition. From gorgeous opening lullaby A New Day’s Coming – the chorus of which the frontman would sing to his children when putting them to bed each night – through to the startling doom metal riffs of the excellently-titled Medicine Square Garden, Frank Iero And The Future Violents are as ambitious as they are utterly exhilarating. There’s the heartfelt sing-along of Great Party, the brooding, ominous Six Feet Down Under (the record’s clearest nod to the crash), the effortless swagger of album highlight Moto-Pop, the frenzied Fever Dream and the emphatic sing-along of closer 24k Lush. That no single song sticks to any one genre for more than half a minute or so makes this record a real challenge to pin down, and means that Frank and co successfully manage to offer up something new with each and every listen.

Deliberately disordered and yet so evidently crafted with total precision, Barriers doesn’t so much live up to its title as it does completely go against and destroy everything that very word symbolises. It’s brilliant.